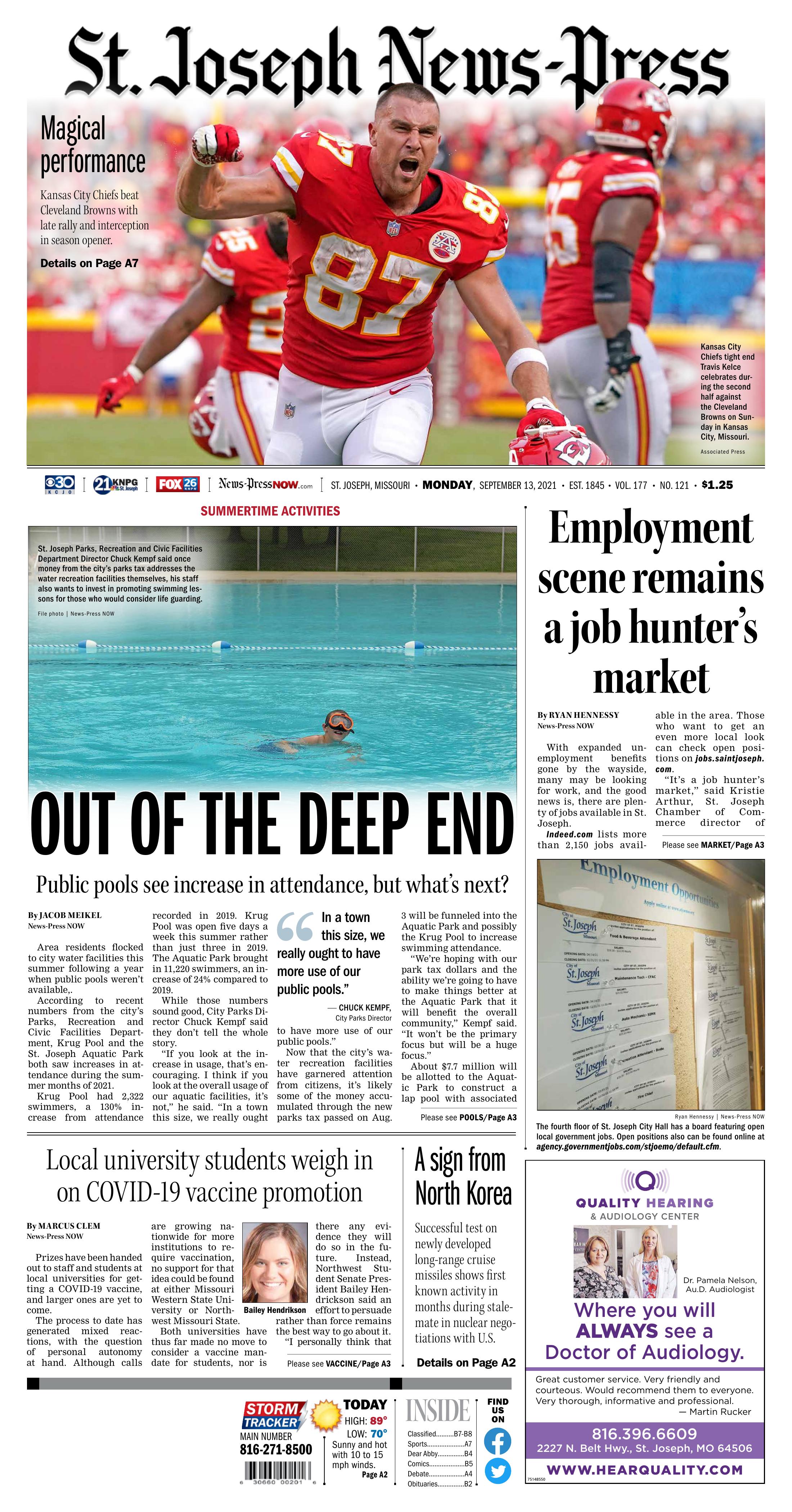 St. Joseph Parks, Recreation and Civic Facilities Department Director Chuck Kempf said once money from the city’s parks tax addresses the water recreation facilities themselves, his staff also wants to invest in promoting swimming lessons for those who would consider life guarding.

According to recent numbers from the city’s Parks, Recreation and Civic Facilities Department, Krug Pool and the St. Joseph Aquatic Park both saw increases in attendance during the summer months of 2021.

“If you look at the increase in usage, that’s encouraging. I think if you look at the overall usage of our aquatic facilities, it’s not,” he said. “In a town this size, we really ought to have more use of our public pools.”

Now that the city’s water recreation facilities have garnered attention from citizens, it’s likely some of the money accumulated through the new parks tax passed on Aug. 3 will be funneled into the Aquatic Park and possibly the Krug Pool to increase swimming attendance.

“We’re hoping with our park tax dollars and the ability we’re going to have to make things better at the Aquatic Park that it will benefit the overall community,” Kempf said. “It won’t be the primary focus but will be a huge focus.”

Given Krug Pool’s traditional construction, Kempf said it will be important to consider public opinion to find out what the next moves will be.

“We need to stop and listen to the younger folks and see what’s more interesting to them and what’s more engaging to them,” he said. “That’s what we really need to be developing in St. Joseph are those types of facilities.”

As St. Joseph water recreation facilities have higher attendance, the number of kids interested in swimming lessons and going on to become lifeguards will be a pressing concern for parks officials as the job is in high demand throughout the country.

Motti Eliyahu, a content developer for American Aquatic and Safety Training of Valley Stream, New York, said given the shortage of lifeguards, wages can reach peaks of $30 an hour with the demand for those who have the certification and skills.

“There’s such a severe shortage of lifeguards that people are willing to pay anything to get a lifeguard to make sure their kids are safe,” Eliyahu said.

Eliyahu believes a possible explanation for the shortage of lifeguards, who he said typically range from 15 to 22 years old, is because of the difficulty for many to renew their certification given the COVID-19 pandemic.

“For the first year of COVID, everything was shut down. The second year, a lot of the certification of current lifeguards are expiring,” Eliyahu said. “It expires every two years, so we didn’t generally renew lifeguards last year due to COVID and all the pools being shut down.”

Statistics from www.ZipRecruiter.com said the average wage for lifeguards is $11.57 per hour.

The fourth floor of St. Joseph City Hall has a board featuring open local government jobs. Open positions also can be found online at agency.governmentjobs.com/stjoemo/default.cfm.

With expanded unemployment benefits gone by the wayside, many may be looking for work, and the good news is, there are plenty of jobs available in St. Joseph.

Indeed.com lists more than 2,150 jobs available in the area. Those who want to get an even more local look can check open positions on jobs.saintjoseph.com.

However, the chamber isn’t leaving it at just that, as they are partnering with St. Joseph Job Center to host a job fair from 2 to 5 p.m. Wednesday, Sept. 29, in the parking lot at 2202 Frederick Ave.

“It’ll be family-friendly,” Arthur said. “If you don’t have a sitter, you’re welcome to bring your children.”

Food trucks, face painting, a fishing game and other family activities will take place at the event.

Networking at events like this or asking friends and family members to help with connections to potential employers are good ways to get a foot in the door.

Of course, in today’s world, many jobs are posted online, and companies utilize software to filter potential candidates before they review files. A recent Harvard Business School study, “Hidden Workers: Untapped Talent” showed that it can be difficult to find work online among some qualified workers because their applications are sifted out by algorithms.

“Be very careful with your resume. Make sure that it has keywords in it that associate with the job that you’re applying for as well as your cover letter,” Arthur said.

Arthur added that it’s important to research companies and ask questions to community members about their culture.

“You’re going to spend most of your time there, so make sure it’s the right fit for you,” Arthur said.

Students walk on Thursday to the Administration Building at Northwest Missouri State.

Prizes have been handed out to staff and students at local universities for getting a COVID-19 vaccine, and larger ones are yet to come.

The process to date has generated mixed reactions, with the question of personal autonomy at hand. Although calls are growing nationwide for more institutions to require vaccination, no support for that idea could be found at either Missouri Western State University or Northwest Missouri State.

Both universities have thus far made no move to consider a vaccine mandate for students, nor is there any evidence they will do so in the future. Instead, Northwest Student Senate President Bailey Hendrickson said an effort to persuade rather than force remains the best way to go about it.

Northwest announced at the end of August that it will draw names from registered students who have received a COVID-19 vaccine to grant a grand prize of $10,000 in scholarship money. A combined value of $50,000 in other new prizes is on offer in addition to the previous drawings for individual $2,500 grants, parking passes, Bearcat Bookstore gift cards and on-campus dining vouchers. The next drawing is Monday, Sept. 13, and the final drawing is Friday, Oct. 1.

However, Western sophomore Alyssa White said that no incentive will persuade her to get a vaccine, and, she said, the constant talk of the need to get one makes her feel unduly pressured. She would leave the university in the event of any mandate coming into force, she said.

“I feel like students should have their own opinion on what to do,” White said. “And just adding an incentive makes it feel like you’re pressured to get it ... instead of having your own opinion, your own free will.”

William Russell, professor of health and exercise science, registered for a staff drawing and received a $50 on-campus dining voucher. He likewise is opposed to the idea of a vaccine mandate but said he sees no harm in trying to persuade people to get the shot, a decision he made months ago.

“As serious as (the virus) is, with just several simple precautions — masks being one of them, hand washing, utilizing the vaccine — with more and more people doing those things, just being disciplined about those things, we should be OK,” Russell said.

Fred Flores, a junior at Western, is dedicated to following the campus rule of wearing a face covering indoors at all times, and he has been vaccinated. The question of an incentive, he said, is mostly not applicable to him as he would have done these things anyway. There also doesn’t seem to be as much awareness among students about the offer as there could be.

“I think it’s at least an effort,” he said. “I don’t how much of an effort it really, or how much of a push, it really makes people consider a vaccine.”

Russell said he understands that students may not necessarily engage well with an internet campaign about incentives, so he brings the matter up regularly in class.

“Getting the word out there face to face can never hurt,” he said.