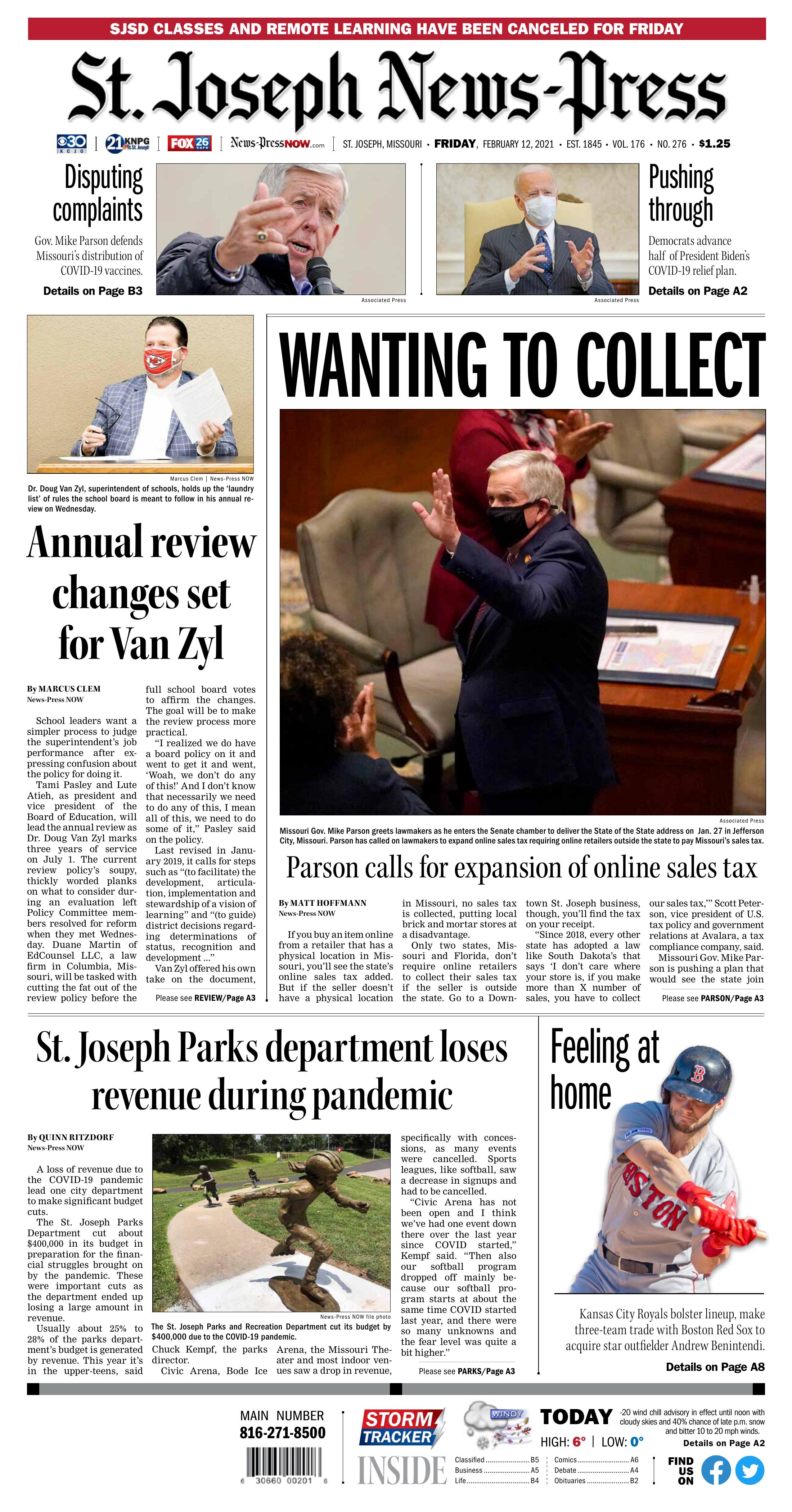 Dr. Doug Van Zyl, superintendent of schools, holds up the ‘laundry list’ of rules the school board is meant to follow in his annual review on Wednesday.

Larry Koch, SJSD Board of Education member, speaks on Wednesday regarding Policy CBG: Evaluation of the Superintendent.

School leaders want a simpler process to judge the superintendent’s job performance after expressing confusion about the policy for doing it.

Tami Pasley and Lute Atieh, as president and vice president of the Board of Education, will lead the annual review as Dr. Doug Van Zyl marks three years of service on July 1. The current review policy’s soupy, thickly worded planks on what to consider during an evaluation left Policy Committee members resolved for reform when they met Wednesday. Duane Martin of EdCounsel LLC, a law firm in Columbia, Missouri, will be tasked with cutting the fat out of the review policy before the full school board votes to affirm the changes. The goal will be to make the review process more practical.

Last revised in January 2019, it calls for steps such as “(to facilitate) the development, articulation, implementation and stewardship of a vision of learning” and “(to guide) district decisions regarding determinations of status, recognition and development ...”

Van Zyl offered his own take on the document, which contains “jargon” he described as normal for his line of work but may be hard to correctly understand and apply.

“If you’re going to do a laundry list of things, then I think you have to expect that that laundry list is only going to be done to a certain level,” Van Zyl said. “If you have some more specific goals, I think that that’s helpful.”

Pasley spoke to aspects of the current policy that appeal to her: “Formative valuation” and “summative evaluation.” The former, is essence, refers to reports Van Zyl gives each month to the school board. The latter sets up the procedure for determining how well he’s done his job, and is notably on the reverse side of a document that features 14 complex points of observation. Legal counsel will be asked to “red line” text from those points that isn’t necessary.

Committee member Larry Koch joined a consensus in the policy committee on how to solve this problem with an attorney’s assistance, but he added a precautionary note.

“My caution would be we don’t get too far away from the (Missouri School Boards Association) recommendation,” he said. “One of the things that (former board member) Lori (Prussman) and I fought for two years was we had so many local policies that did not match anybody else’s policy. We got most of those in line, which helps, I think, a great deal.”

Missouri Gov. Mike Parson greets lawmakers as he enters the Senate chamber to deliver the State of the State address on Jan. 27 in Jefferson City, Missouri. Parson has called on lawmakers to expand online sales tax requiring online retailers outside the state to pay Missouri’s sales tax.

Only two states, Missouri and Florida, don’t require online retailers to collect their sales tax if the seller is outside the state. Go to a Downtown St. Joseph business, though, you’ll find the tax on your receipt.

“Since 2018, every other state has adopted a law like South Dakota’s that says ‘I don’t care where your store is, if you make more than X number of sales, you have to collect our sales tax,’” Scott Peterson, vice president of U.S. tax policy and government relations at Avalara, a tax compliance company, said.

Missouri Gov. Mike Parson is pushing a plan that would see the state join the others in collecting online sales tax, regardless of where the store is located.

Parson’s legislation doesn’t have a clear path through the legislature. Both State Reps. Bill Falkner, R-St. Joseph, and J. Eggleston, R-Maysville, have proposed their own ideas.

Parson’s plan calls for the state to create an emergency fund with the online sales tax dollars.

“I know the argument up here is going to be who gets the money? How are you going to spend the money? And all of that stuff,” Parson said. “All I’m telling them is, ‘Pass the dang bill’ and at least ... start collecting the money. We’ll fight over where that money goes some other day, but even the playing field for business people.”

Peterson said that if all things are equal between a business with a location in Missouri and an online retailer without one, consumers pay more under current law when shopping at the store in Missouri.

“The folks who run stores think this is unfair,” Peterson said. “They’re competing with somebody outside the state, frankly, even outside the country. (They’re) selling the exact same thing for the exact same price for less money because they’re not charging the Missouri sales tax.”

Falkner previously told News-Press NOW that if local governments received online sales tax, they could drop other speciality taxes like the motel tax. Buchanan County and St. Joseph already have passed ordinances that would allow them to begin collecting online sales tax if legislation passes at the state level.

“My thought on this is if municipalities and counties are able to collect the sales tax that’s due to them, we may not need the extra specialty taxes because you’ll have the funding that you need,” he said.

Falkner said that his bill recently received a hearing Wednesday and had positive support. Eggleston’s bill advanced through the Ways and Means Committee at the statehouse Wednesday.

According to a Missouri Senate estimate, if the state collected its 4% online sales tax throughout the country, it could generate up to $142.5 million.

contributed to this report.

While many of the city’s parks facilities lost money due to the COVID-19 pandemic, Fairview Golf Course made close to $300,000 in revenue.

The St. Joseph Parks and Recreation Department cut its budget by $400,000 due to the COVID-19 pandemic.

A loss of revenue due to the COVID-19 pandemic lead one city department to make significant budget cuts.

The St. Joseph Parks Department cut about $400,000 in its budget in preparation for the financial struggles brought on by the pandemic. These were important cuts as the department ended up losing a large amount in revenue.

Usually about 25% to 28% of the parks department’s budget is generated by revenue. This year it’s in the upper-teens, said Chuck Kempf, the parks director.

Civic Arena, Bode Ice Arena, the Missouri Theater and most indoor venues saw a drop in revenue, specifically with concessions, as many events were cancelled. Sports leagues, like softball, saw a decrease in signups and had to be cancelled.

The budget cuts and loss in revenue affected labor and therefore the maintenance of the parks system.

“One area that suffered was our maintenance department with the loss of our inmate crews,” Kempf said. “It saved us a little bit of money because they weren’t working, but it also really affected the level of the maintenance that we were able to perform. There’s always a trade-off. If you save money, there’s going to be a drop-off in service level. You try and find a balance when you have to do that.”

For four weeks during the pandemic, 38 of the department’s 54 full-time employees and all part-time workers were put on leave. While this saved the department money, maintenance suffered.

Swimming lost $70,000 in revenue, the most of any activity, because most pools were closed during the peak summer season. But this also meant the department saved on operating costs.

“We ended up saving $190,000 in expenses, so kind of depends on how you want to look at that financially,” Kempf said. “You might even consider we came out ahead, but obviously we didn’t provide an important program to the community either.”

While nearly every program in the parks department lost revenue during the pandemic, golf was the one bright spot. Fairview Golf Course, which is owned by the city, made about $285,000 in revenue. Kempf said it could have been much more if the banquet room and concessions were fully open.

“That’s something that the people could still come and do, not have to be indoors, not have to be confined spaces,” said Jeff Atkins, the assistant parks director. “They’re outdoors, it’s easy to stay spread out when you’re outdoors. It’s a good physical activity that they could get out and still enjoy and be relatively safe while they were doing it.”

The pandemic has left an itch for people to get back to activities, especially outside. That’s why Kempf thinks this year will look much better for participation and revenues.

“Seems like the interest in outdoor recreation sports and activities has increased,” Kempf said. “That’s a good thing for a lot of reasons, so we’re hoping that will continue.”

Parks Revenue Down About 10 Percent