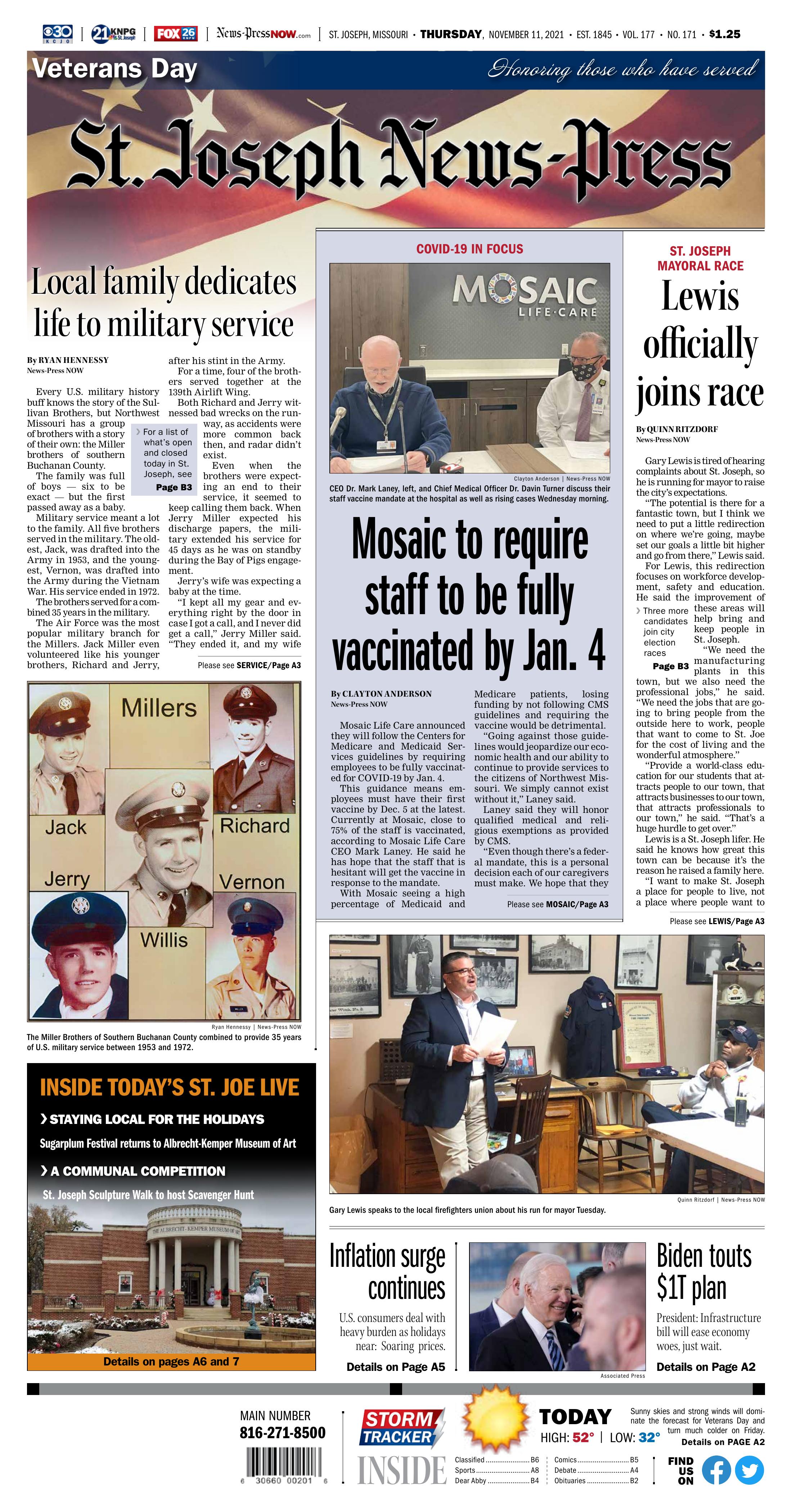 Mosaic Life Care announced they will follow the Centers for Medicare and Medicaid Services guidelines by requiring employees to be fully vaccinated for COVID-19 by Jan. 4.

This guidance means employees must have their first vaccine by Dec. 5 at the latest. Currently at Mosaic, close to 75% of the staff is vaccinated, according to Mosaic Life Care CEO Mark Laney. He said he has hope that the staff that is hesitant will get the vaccine in response to the mandate.

With Mosaic seeing a high percentage of Medicaid and Medicare patients, losing funding by not following CMS guidelines and requiring the vaccine would be detrimental.

“Going against those guidelines would jeopardize our economic health and our ability to continue to provide services to the citizens of Northwest Missouri. We simply cannot exist without it,” Laney said.

Laney said they will honor qualified medical and religious exemptions as provided by CMS.

“Even though there’s a federal mandate, this is a personal decision each of our caregivers must make. We hope that they will choose to become vaccinated and come into compliance so they can stay and work with them,” Laney said.

The vaccine mandate comes right in the face of the current COVID-19 caseload increasing. Currently, Mosaic Life Care has seen its positivity rate climb to 14%, and staff members are expecting to see hospitalizations continue to rise. As of now, there are 24 people hospitalized at Mosaic Life Care, most of whom are unvaccinated.

Mosaic Life Care’s Chief Medical Officer Dr. Davin Turner said the majority of their patients are in the older population, but they are seeing the delta variant cause people to get really sick.

“Well over 80% of all patients are unvaccinated that are being admitted to our hospital. We have had a couple of breakthrough infections, (but) predominantly they normally do very well,” Turner said.

Mosaic Life Care will hold a vaccination event for those over 12 at the old Gordmans in the East Hills Shopping Center on Nov. 17. Sign-ups can be made at mymlc.com. There will be upcoming pediatric vaccine events.

The Miller Brothers of Southern Buchanan County combined to provide 35 years of U.S. military service between 1953 and 1972.

Every U.S. military history buff knows the story of the Sullivan Brothers, but Northwest Missouri has a group of brothers with a story of their own: the Miller brothers of southern Buchanan County.

The family was full of boys — six to be exact — but the first passed away as a baby.

The brothers served for a combined 35 years in the military.

The Air Force was the most popular military branch for the Millers. Jack Miller even volunteered like his younger brothers, Richard and Jerry, after his stint in the Army.

For a time, four of the brothers served together at the 139th Airlift Wing.

Both Richard and Jerry witnessed bad wrecks on the runway, as accidents were more common back then, and radar didn’t exist.

Even when the brothers were expecting an end to their service, it seemed to keep calling them back. When Jerry Miller expected his discharge papers, the military extended his service for 45 days as he was on standby during the Bay of Pigs engagement.

Jerry’s wife was expecting a baby at the time.

“I kept all my gear and everything right by the door in case I got a call, and I never did get a call,” Jerry Miller said. “They ended it, and my wife was thrilled to death.”

Besides growing up in the military together, the boys also grew up on a farm in San Antonio, an unincorporated township in Buchanan County. Their farm had dairy cows and grew corn.

The day began with milking cows before walking a few miles to school, then working three jobs after school.

The brothers weren’t the first from the Miller household to serve in the military, and they aren’t the last either. Their father joined the Navy when he was just 15 years old.

Of course, when the military learned about his age, he got kicked out, but he later rejoined the service.

“He wanted Grandma and Grandpa to sign for him, and they wouldn’t do it, so he went on,” Richard Miller said.

Jerry has two grandsons that are currently serving in the Marines.

Richard, 85, is spending his first Veterans Day without his wife, who passed away this last year.

After a life centered around the military, Both Richard and Jerry offered advice to other veterans.

“You go through an awful lot, but at the end, you know, you’ll appreciate what you’ve done,” Jerry Miller said.

“Life, at times, seems, it’s pretty hard, but the good Lord will take care of you in time, so just take it one day at a time,” Richard Miller added.

Richard and Jerry Miller said they appreciate it when they are thanked for their service. They said the tribute makes them feel pride.

Gary Lewis speaks to the local firefighters union about his run for mayor Tuesday.

Gary Lewis is tired of hearing complaints about St. Joseph, so he is running for mayor to raise the city’s expectations.

“The potential is there for a fantastic town, but I think we need to put a little redirection on where we’re going, maybe set our goals a little bit higher and go from there,” Lewis said.

For Lewis, this redirection focuses on workforce development, safety and education. He said the improvement of these areas will help bring and keep people in St. Joseph.

“We need the manufacturing plants in this town, but we also need the professional jobs,” he said. “We need the jobs that are going to bring people from the outside here to work, people that want to come to St. Joe for the cost of living and the wonderful atmosphere.”

Lewis is a St. Joseph lifer. He said he knows how great this town can be because it’s the reason he raised a family here.

“I want to make St. Joseph a place for people to live, not a place where people want to leave,” he said.

Lewis went to Central High School and graduated from Missouri Western State University with a bachelor’s in nursing and later received his master’s in health care administration from the University of Missouri.

He has spent his entire life in the health care industry, including as a flight medic in the Air National Guard and a nurse at Heartland Regional Medical Center, now known as Mosaic Life Care, for about 15 years. He then spent 20 years in the pharmaceutical industry.

This experience with vulnerable patients helped him understand human behavior and how to build relationships.

Lewis now works as an occupational health nurse for Tyson Foods, which he said he will continue if elected mayor.

“I know there’s a lot of time involved,” he said. “I’m committed to that. I’ve worked two, three jobs before in the past, so I know what that takes. I’m committed to put that time in.”

“If I was elected mayor, I can’t do this by myself,” Lewis said. “It’s going to take the citizens of St. Joe to buy in to get these changes and get this city going in the right direction.”