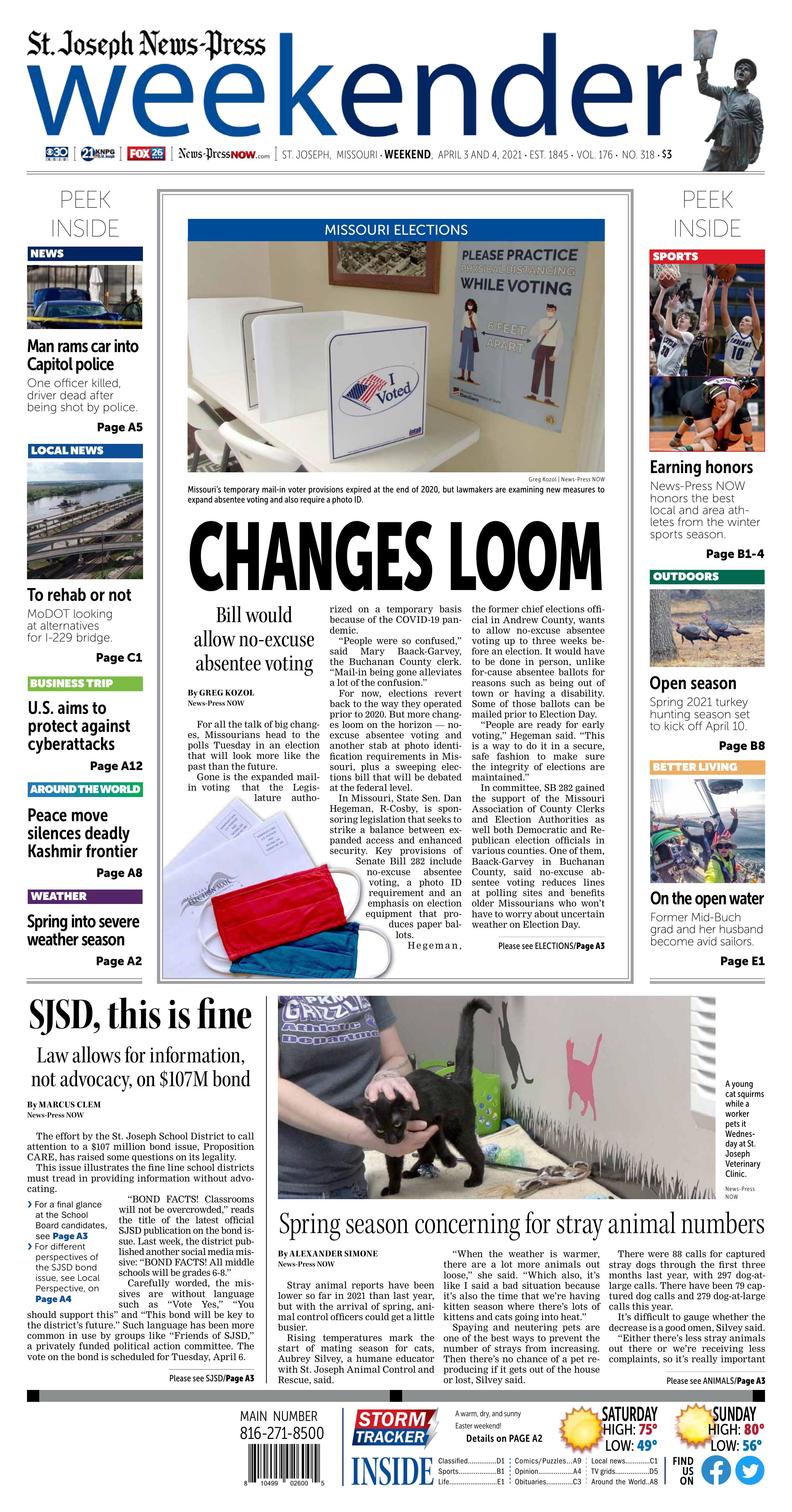 Missouri’s temporary mail-in voter provisions expired at the end of 2020, but lawmakers are examining new measures to expand absentee voting and also require a photo ID.

For all the talk of big changes, Missourians head to the polls Tuesday in an election that will look more like the past than the future.

Gone is the expanded mail-in voting that the Legislature authorized on a temporary basis because of the COVID-19 pandemic.

“People were so confused,” said Mary Baack-Garvey, the Buchanan County clerk. “Mail-in being gone alleviates a lot of the confusion.”

For now, elections revert back to the way they operated prior to 2020. But more changes loom on the horizon — no-excuse absentee voting and another stab at photo identification requirements in Missouri, plus a sweeping elections bill that will be debated at the federal level.

In Missouri, State Sen. Dan Hegeman, R-Cosby, is sponsoring legislation that seeks to strike a balance between expanded access and enhanced security. Key provisions of Senate Bill 282 include no-excuse absentee voting, a photo ID requirement and an emphasis on election equipment that produces paper ballots.

Hegeman, the former chief elections official in Andrew County, wants to allow no-excuse absentee voting up to three weeks before an election. It would have to be done in person, unlike for-cause absentee ballots for reasons such as being out of town or having a disability. Some of those ballots can be mailed prior to Election Day.

“People are ready for early voting,” Hegeman said. “This is a way to do it in a secure, safe fashion to make sure the integrity of elections are maintained.”

In committee, SB 282 gained the support of the Missouri Association of County Clerks and Election Authorities as well both Democratic and Republican election officials in various counties. One of them, Baack-Garvey in Buchanan County, said no-excuse absentee voting reduces lines at polling sites and benefits older Missourians who won’t have to worry about uncertain weather on Election Day.

“Especially in colder months, in November, if they have a nice day they can come out and get that ballot done earlier,” she said. “It alleviates them possibly lying to us that they’re actually going to be out of town or not.”

Hegeman’s bill awaits a final Senate vote, and some of its provisions were tacked to a similar measure, House Bill 738. It has its share of critics, including the AARP and the Missouri Voter Protection Coalition, an organization that has fought a proposed photo ID requirement for a number of years.

“It only gives a nod to no-excuse absentee voting,” said Denise Lieberman, director and general counsel of the Voter Protection Coalition. “It limits our most vulnerable voters from taking advantage.”

Lieberman takes issue with the bill’s failure to expand mail-in voting and with the decision to pursue a photo ID requirement. She said those two elements, if they become law, will disenfranchise minorities and older voters.

“We see a lot of common themes,” she said. “We have definitely seen an uptick in bills that would make it more difficult for Missouri’s voters.”

In 2016, Missouri voters approved a constitutional amendment that allowed lawmakers to move forward with a voter ID law. It resulted in a law that directed voters without a photo ID to sign a sworn affidavit, but the Missouri Supreme Court struck it down last year.

Hegeman’s bill eliminates the requirement to sign an affidavit and would allow a voter without a photo ID to submit a provisional ballot.

“A photo ID is a very secure way of allowing people to vote,” he said. “Of course, people can get a photo ID, free of charge, from a license bureau.”

Baack-Garvey estimates that 9-in-10 voters already show a driver’s license at the voting site. She said the big issue is the back and forth that creates a sense of confusion.

“It was here, it passed and then it went back to the courts,” she said. “I wish we could just have it or not have it.”

It remains to be seen whether any common ground is in the works on elections legislation, an issue that tends to be viewed through the absolutist prism of voter suppression on one end and election security on the other.

Is there any room in between? Maybe no-excuse absentee voting is a start. “Many voters have voted absentee for many years,” Hegeman said, “and they’ve always happened to be out of the district at election time. I think it’s time to do away with the charade.”

As superintendent, Dr. Doug Van Zyl can appear at public events and release messaging through the Downtown office that tells the public what a bond issue will or will not do, and why it is being proposed. But, he can’t ask for their votes.

Similarly to the ‘Friends of SJSD’ campaign for ‘Yes,’ the ‘No,’ campaign, anchored by the Facebook group ‘We the People 3 Schools,’ is a private effort.

Similarly to the 'Friends of SJSD' campaign for 'Yes,' the 'No,' campaign, anchored by the Facebook group 'We the People 3 Schools,' is a private effort.

A ‘Vote Yes’ sign is pictured along a sidewalk in St. Joseph. Such signage is not to be confused with SJSD communications, as it comes from a private group.

A 'Vote Yes' sign is pictured along a sidewalk in St. Joseph. Such signage is not to be confused with SJSD communications, as it comes from a private group.

The effort by the St. Joseph School District to call attention to a $107 million bond issue, Proposition CARE, has raised some questions on its legality.

This issue illustrates the fine line school districts must tread in providing information without advocating.

“BOND FACTS! Classrooms will not be overcrowded,” reads the title of the latest official SJSD publication on the bond issue. Last week, the district published another social media missive: “BOND FACTS! All middle schools will be grades 6-8.”

Carefully worded, the missives are without language such as “Vote Yes,” “You should support this” and “This bond will be key to the district’s future.” Such language has been more common in use by groups like “Friends of SJSD,” a privately funded political action committee. The vote on the bond is scheduled for Tuesday, April 6.

“There really aren’t many restrictions on what districts are allowed to say about bond issues,” said Vincenzo Iuppa, general counsel for the Missouri National Education Association. “... The district does need to walk a bit of a tightrope in verifying that they have used money wisely in the past and that they have been providing a good education with the funds they have had up to this point.”

Chapter No. 115, section No. 646 of Title IX of Missouri statute expressly forbids the use of public funds to support, advocate for or oppose any candidate for elected office or any ballot measure. However, the section “shall not be construed to prohibit any public official of a political subdivision from making public appearances or from issuing press releases concerning any such ballot measure.”

The principle, as presented by the Missouri Ethics Commission, is “educate, don’t advocate.” The Office of the Attorney General of Missouri ultimately enforces this statute. Attorneys general issue letters of opinion on such matters. Those opinions (AGOs) are considered guidelines for their successors and all those subject to their jurisdiction. However, they carry no force of law.

In AGO 54-90, the office defined the word “advocate” as, “to plead in favor of; defend in argument before a tribunal; support publicly.” Such actions, the AGO concludes, would be a violation of Missouri law if done by a public official using public monies.

An attorney for the ethics commission, citing its need to remain independent of any campaign or initiative that might conceivably come before it, declined to comment. There is no indication that Proposition CARE will or may be subject to such a process. Duane Martin, the district’s go-to for day-to-day legal consultation via the firm EdCounsel LLC of Columbia, Missouri, did not respond to a call for comment.

“It is important to hold the district accountable when they do discuss these matters, and we often have our local associations active in the conversation about bond or levy matters,” Iuppa said. “... In general, (the MNEA) support any additional funds that districts can get. It is important that districts remember they are working with public funds and with a duty to the students ... They must use the money wisely.”

St. Joseph Board of Education

A young cat squirms while a worker pets it Wednesday at St. Joseph Veterinary Clinic.

Stray animal reports have been lower so far in 2021 than last year, but with the arrival of spring, animal control officers could get a little busier.

“When the weather is warmer, there are a lot more animals out loose,” she said. “Which also, it’s like I said a bad situation because it’s also the time that we’re having kitten season where there’s lots of kittens and cats going into heat.”

Spaying and neutering pets are one of the best ways to prevent the number of strays from increasing. Then there’s no chance of a pet reproducing if it gets out of the house or lost, Silvey said.

It’s difficult to gauge whether the decrease is a good omen, Silvey said.

“Either there’s less stray animals out there or we’re receiving less complaints, so it’s really important that if people see something they call us and let us know,” she said.

The shelter began microchipping strays taken in there a few years ago, but many of the animals picked up still are found with no chip or other form of identification. That can make it difficult to know whether animals are lost or stray, Silvey said.

“If your animal isn’t microchipped or isn’t wearing registration, it’s really hard for us to get it back to you,” she said. “Especially if your dog came from Atchison or Kansas City, you don’t know where to look.”

A third of pets that get lost never make it home, Silvey said.

“Without an owner involvement, it’s pretty hard because there’s just free-roaming populations that receive no veterinary care whatsoever,” he said. “And so when your pet encounters that population, there’s a risk involved. So that’s why you want to make sure your own individual pets are well taken care of and vaccinated.”

Disease and parasites vary depending on the species, Mrkvicka said. Common concerns for cats include fleas, ticks and feline strains of leukemia and AIDS. Fleas and ticks also can be factors dogs, along with canine parvovirus and mange.

“Dogs can get sarcoptic mange and that can potentially be transmitted to people,” he said. “Cats, occasionally they’ll get mange mites, but usually it’s if they have something else running with them. But ringworm is pretty common in kittens and that’s definitely transmissible to people.”

Stray animal numbers aren’t the only thing that increases as weather warms up. Parasites also start to increase as the seasons change, Mrkvicka said.

“When the temperatures get warmer, the flea and tick population seems to thrive more and we see a lot more skin cases during that time of year,” he said.

Working with the shelter ensures that animals taken in at least get some check-ups and vaccinations, Mrkvicka said.