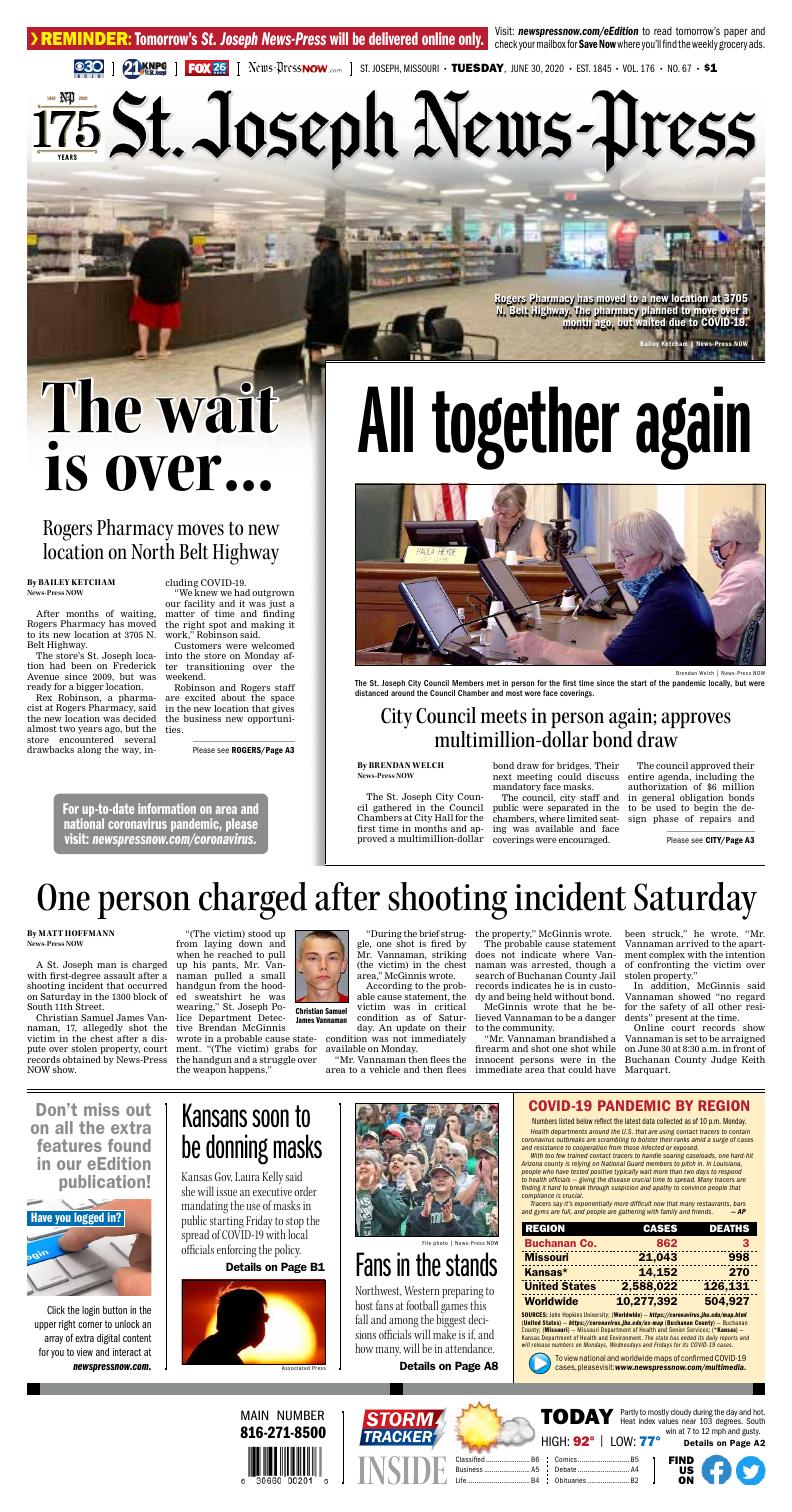 The St. Joseph City Council Members met in person for the first time since the start of the pandemic locally, but were distanced around the Council Chamber and most wore face coverings.

The 11th Street Bridge over Parkway Drive is one of a dozen that were rated ‘poor’ during a study last year. The City Council approved on Monday the use of voter-approved funds for the design phase of a project to repair or replace all of those bridges.

The St. Joseph City Council gathered in the Council Chambers at City Hall for the first time in months and approved a multimillion-dollar bond draw for bridges. Their next meeting could discuss mandatory face masks.

The council, city staff and public were separated in the chambers, where limited seating was available and face coverings were encouraged.

The council approved their entire agenda, including the authorization of $6 million in general obligation bonds to be used to begin the design phase of repairs and replacements for 12 bridges around the city. This item was the first part of a $20 million project to fix those bridges within the next two years.

Mayor Bill McMurray, who supported the GO bonds when they were sent to the voters for approval during the June election, is happy to see the project moving forward.

“We’re in great shape on the time table,” McMurray said. “This is the first part of it, we’re going to go out and get design assistance on all of these projects.”

He said he has been alerted by city staff that some bridges are in need of repairs relatively quickly.

Construction is expected to begin next May.

McMurray said he does feel comfortable continuing to hold council meetings in person at City Hall because of the precautions that are being taken.

During Monday night’s meeting, McMurray announced that the council, during its weekly COVID-19 work session, will be discussing the possibility of requiring face masks in St. Joseph due to spiking case numbers around the country.

“I would much rather appeal to personal responsibility than make another law, issue another order, but we’ll do what we have to do to prevent the spread of this virus,” McMurray said.

That meeting is scheduled for Thursday and will be held via Zoom.

Rogers Pharmacy has moved to a new location at 3705 N. Belt Highway. The pharmacy planned to move over a month ago, but waited due to COVID-19.

After months of waiting, Rogers Pharmacy has moved to its new location at 3705 N. Belt Highway.

The store’s St. Joseph location had been on Frederick Avenue since 2009, but was ready for a bigger location.

Rex Robinson, a pharmacist at Rogers Pharmacy, said the new location was decided almost two years ago, but the store encountered several drawbacks along the way, including COVID-19.

“We knew we had outgrown our facility and it was just a matter of time and finding the right spot and making it work,” Robinson said.

Customers were welcomed into the store on Monday after transitioning over the weekend.

Robinson and Rogers staff are excited about the space in the new location that gives the business new opportunities.

“It’s a night and day difference,” Robinson said. “We’ve got some room to grow here, where as we used up every square inch of the old store.”

Robinson said Rogers is fortunate to have grown over the years and more parking was a huge element that was needed.

“We just didn’t have enough parking to accommodate our customers, expand our delivery systems,” Robinson said.

Some future plans for Rogers are to increase the type of products it sells and create a more inviting environment for customers.

One aspect the previous store didn’t have was a drive-thru. Robinson said it’ll be something he expects many customers to take advantage of.

“People need to realize that a drive-thru is not like a fast food drive-thru, prescriptions take some time and we would encourage people to call ahead,” Robinson said.

In the old location it also was harder to social distance and staff needed to regulate the amount of people inside due to the smaller building.

“We got through that but now we’re into a new chapter,” Robinson said.

Most of the Rogers employees wear masks while at work and Robinson encourages customers to wear one while inside.

A St. Joseph man is charged with first-degree assault after a shooting incident that occurred on Saturday in the 1300 block of South 11th Street.

“(The victim) stood up from laying down and when he reached to pull up his pants, Mr. Vannaman pulled a small handgun from the hooded sweatshirt he was wearing,” St. Joseph Police Department Detective Brendan McGinnis wrote in a probable cause statement. “(The victim) grabs for the handgun and a struggle over the weapon happens.”

“During the brief struggle, one shot is fired by Mr. Vannaman, striking (the victim) in the chest area,” McGinnis wrote.

According to the probable cause statement, the victim was in critical condition as of Saturday. An update on their condition was not immediately available on Monday.

The probable cause statement does not indicate where Vannaman was arrested, though a search of Buchanan County Jail records indicates he is in custody and being held without bond.

McGinnis wrote that he believed Vannaman to be a danger to the community.

“Mr. Vannaman brandished a firearm and shot one shot while innocent persons were in the immediate area that could have been struck,” he wrote. “Mr. Vannaman arrived to the apartment complex with the intention of confronting the victim over stolen property.”

In addition, McGinnis said Vannaman showed “no regard for the safety of all other residents” present at the time.

Online court records show Vannaman is set to be arraigned on June 30 at 8:30 a.m. in front of Buchanan County Judge Keith Marquart. 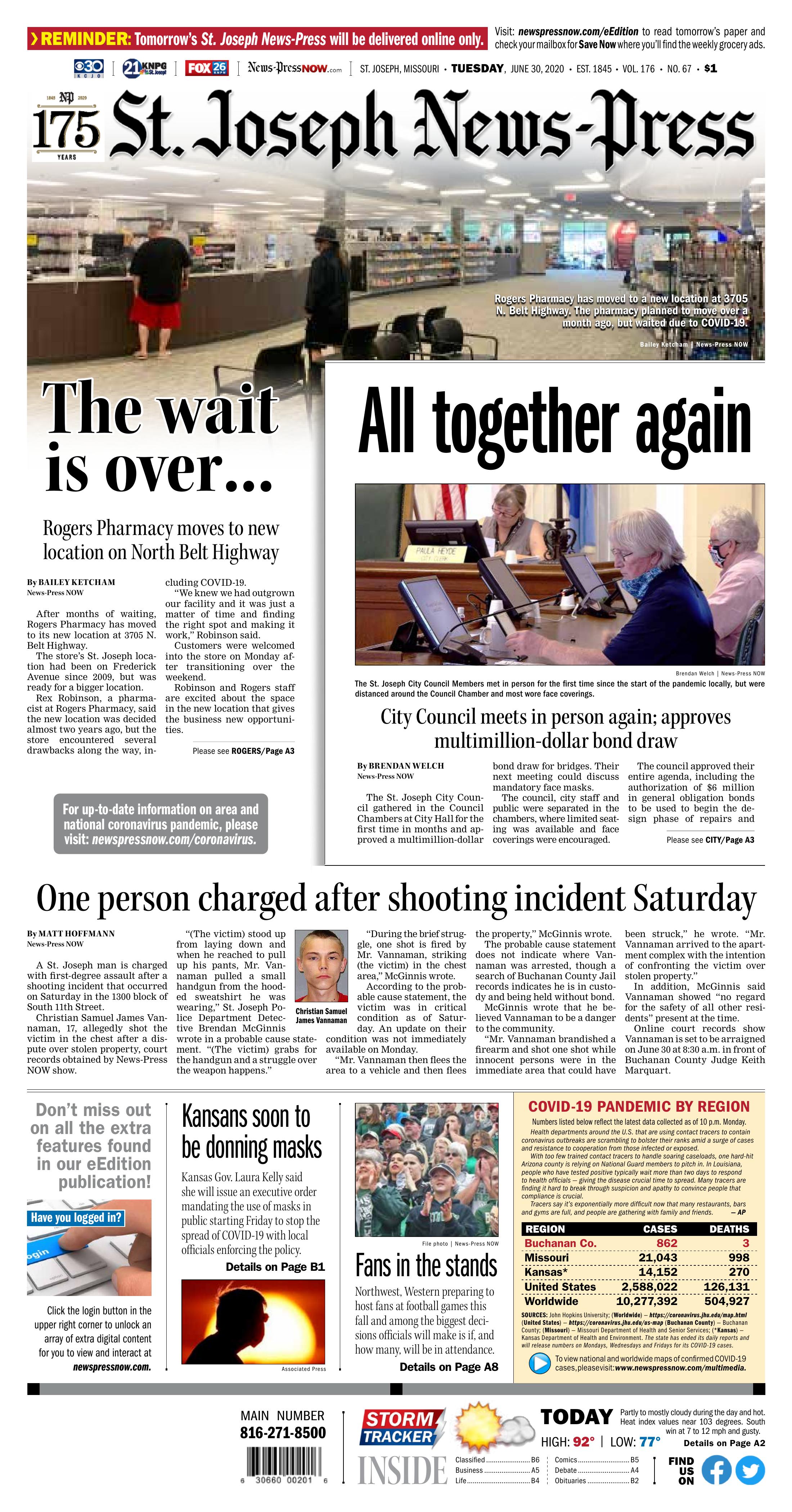