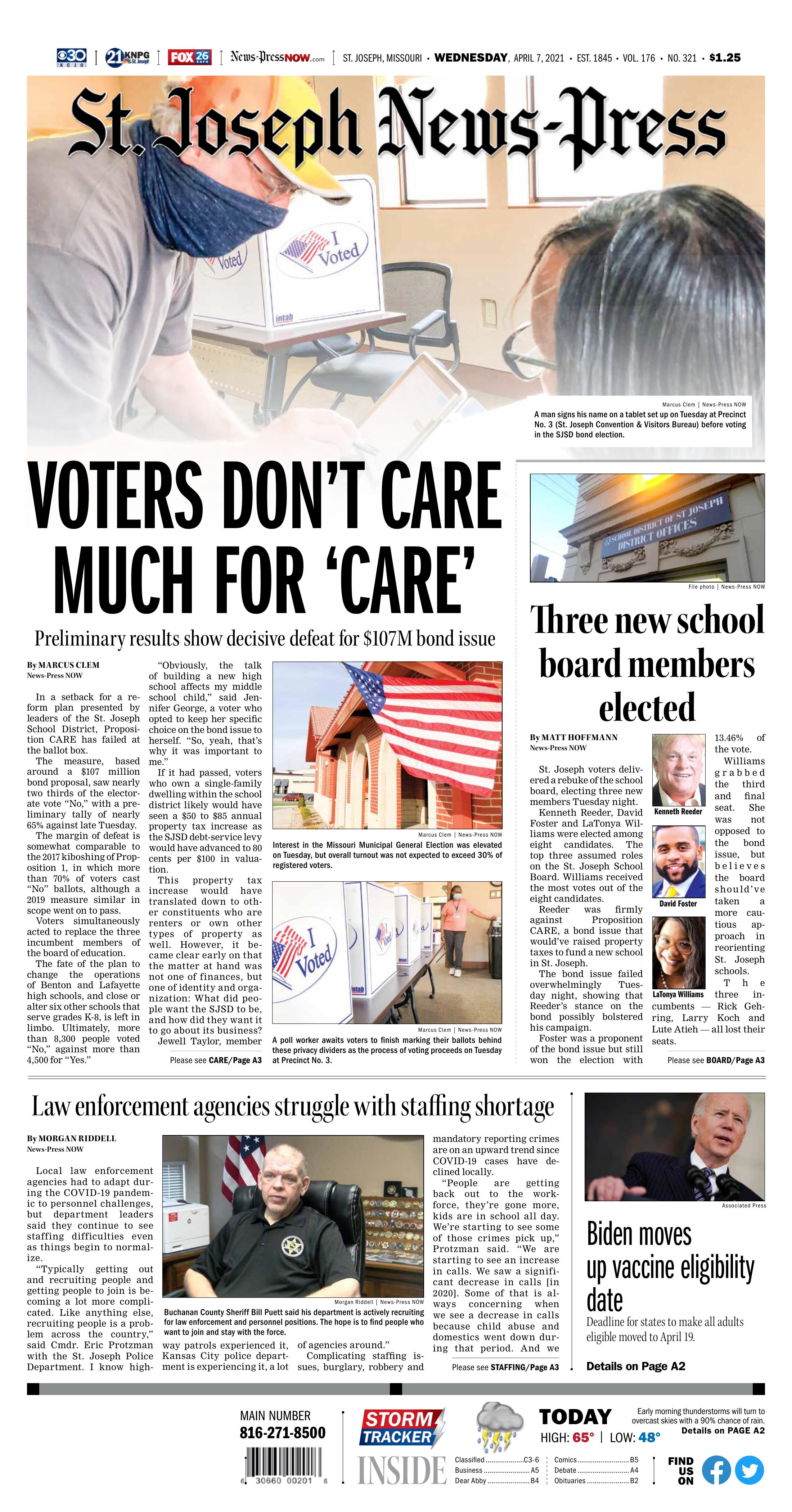 A man signs his name on a tablet set up on Tuesday at Precinct No. 3 (St. Joseph Convention & Visitors Bureau) before voting in the SJSD bond election.

A poll worker awaits voters to finish marking their ballots behind these privacy dividers as the process of voting proceeds on Tuesday at Precinct No. 3.

A man marks his ballot on Tuesday at Precinct No. 3 (St. Joseph Convention & Visitors Bureau) as a poll worker, left, clears and sanitizes voting areas.

Interest in the Missouri Municipal General Election was elevated on Tuesday, but overall turnout was not expected to exceed 30% of registered voters.

Voters are required to refrain from spreading campaign messages and imagery. T-shirts and other emblazoned clothing must be turned inside out or taken off.

In a setback for a reform plan presented by leaders of the St. Joseph School District, Proposition CARE has failed at the ballot box.

The measure, based around a $107 million bond proposal, saw nearly two thirds of the electorate vote “No,” with a preliminary tally of nearly 65% against late Tuesday.

The margin of defeat is somewhat comparable to the 2017 kiboshing of Proposition 1, in which more than 70% of voters cast “No” ballots, although a 2019 measure similar in scope went on to pass.

Voters simultaneously acted to replace the three incumbent members of the board of education.

The fate of the plan to change the operations of Benton and Lafayette high schools, and close or alter six other schools that serve grades K-8, is left in limbo. Ultimately, more than 8,300 people voted “No,” against more than 4,500 for “Yes.”

“Obviously, the talk of building a new high school affects my middle school child,” said Jennifer George, a voter who opted to keep her specific choice on the bond issue to herself. “So, yeah, that’s why it was important to me.”

If it had passed, voters who own a single-family dwelling within the school district likely would have seen a $50 to $85 annual property tax increase as the SJSD debt-service levy would have advanced to 80 cents per $100 in valuation.

This property tax increase would have translated down to other constituents who are renters or own other types of property as well. However, it became clear early on that the matter at hand was not one of finances, but one of identity and organization: What did people want the SJSD to be, and how did they want it to go about its business?

Jewell Taylor, member of the Benton High School Class of 1975, said she voted “No” after careful thought on the future of the school, the need to invest more in education, and BHS’ importance to the community.

“I think it is important for us to have a say in this, and so that’s why I voted ‘No,’” she said. “I think they might listen to us a little bit now, but they’re still probably going to do what they want to do.”

Tom Keller said he voted “No” in considering how, in his view, this election was of critical importance both from a quality of education standpoint and with regard to the future of the community.

“I don’t think they’ve thought all of this through,” he said. “I don’t think the plan is a good one at all. Because it shows favoritism in areas that it shouldn’t ... Geographically, and yes, that’s exactly the point.”

Keller added that he hopes district leaders will take this result and move to renovate the buildings they currently have, and make alterations to the buildings operational status only after exhaustive review and consultation with members of the community.

Buchanan County Sheriff Bill Puett said his department is actively recruiting for law enforcement and personnel positions. The hope is to find people who want to join and stay with the force.

Local law enforcement agencies had to adapt during the COVID-19 pandemic to personnel challenges, but department leaders said they continue to see staffing difficulties even as things begin to normalize.

“Typically getting out and recruiting people and getting people to join is becoming a lot more complicated. Like anything else, recruiting people is a problem across the country,” said Cmdr. Eric Protzman with the St. Joseph Police Department. I know highway patrols experienced it, Kansas City police department is experiencing it, a lot of agencies around.”

Complicating staffing issues, burglary, robbery and mandatory reporting crimes are on an upward trend since COVID-19 cases have declined locally.

Buchanan County Sheriff Bill Puett said while calls may be increasing, staffing is not improving anywhere.

Officials are hopeful that declining COVID-19 cases and more community events may give the departments the opportunity to reach more people for recruiting.

“We recruit online on our Facebook page and lots of things have been electronic since COVID,” Puett said. “I think some of the hiring fairs will open back up and this will kind of move forward, but none of that is in place.”

Both Protzman and Puett said they are going to be recruiting for positions. The hope is to find people who want to stay with the departments long-term.

Kenneth Reeder, David Foster and LaTonya Williams were elected among eight candidates. The top three assumed roles on the St. Joseph School Board. Reeder received the most votes out of the eight candidates.

Reeder was firmly against Proposition CARE, a bond issue that would’ve raised property taxes to fund a new school in St. Joseph.

Foster was a proponent of the bond issue but still won the election with 13.46% of the vote.

Williams grabbed the third and final seat. She was not opposed to the bond issue, but believes the board should’ve taken a more cautious approach in reorienting St. Joseph schools.

The board now will wrestle with future plans for the district. Until Tuesday, the board had made it clear it seeks to reduce the number of high schools in St. Joseph down to two, no matter the outcome of the election. Under a secondary plan in case the bond issue failed, Benton High School would be left uncertain.

Four board members remain from the group that placed the bond issue on the ballot. If they don’t change their minds those four would retain the majority.

Williams said “the people have spoken” and that she’ll review the two-school plan as a board member.

“For me, it means that I need to go to the beginning at the drawing board,” Williams said. “Because I know the board has made some choices and I was not a part of those. And so I need to look at everything.”

Foster said he thought the bond might fail and is contemplating his position in light of the election.

Reeder couldn’t be reached for comment by phone Tuesday night but he posted a message on his Facebook page.

“The people know what they want and wanted to be heard,” Reeder posted.

Most Voters Don't Care Much for Prop. CARE