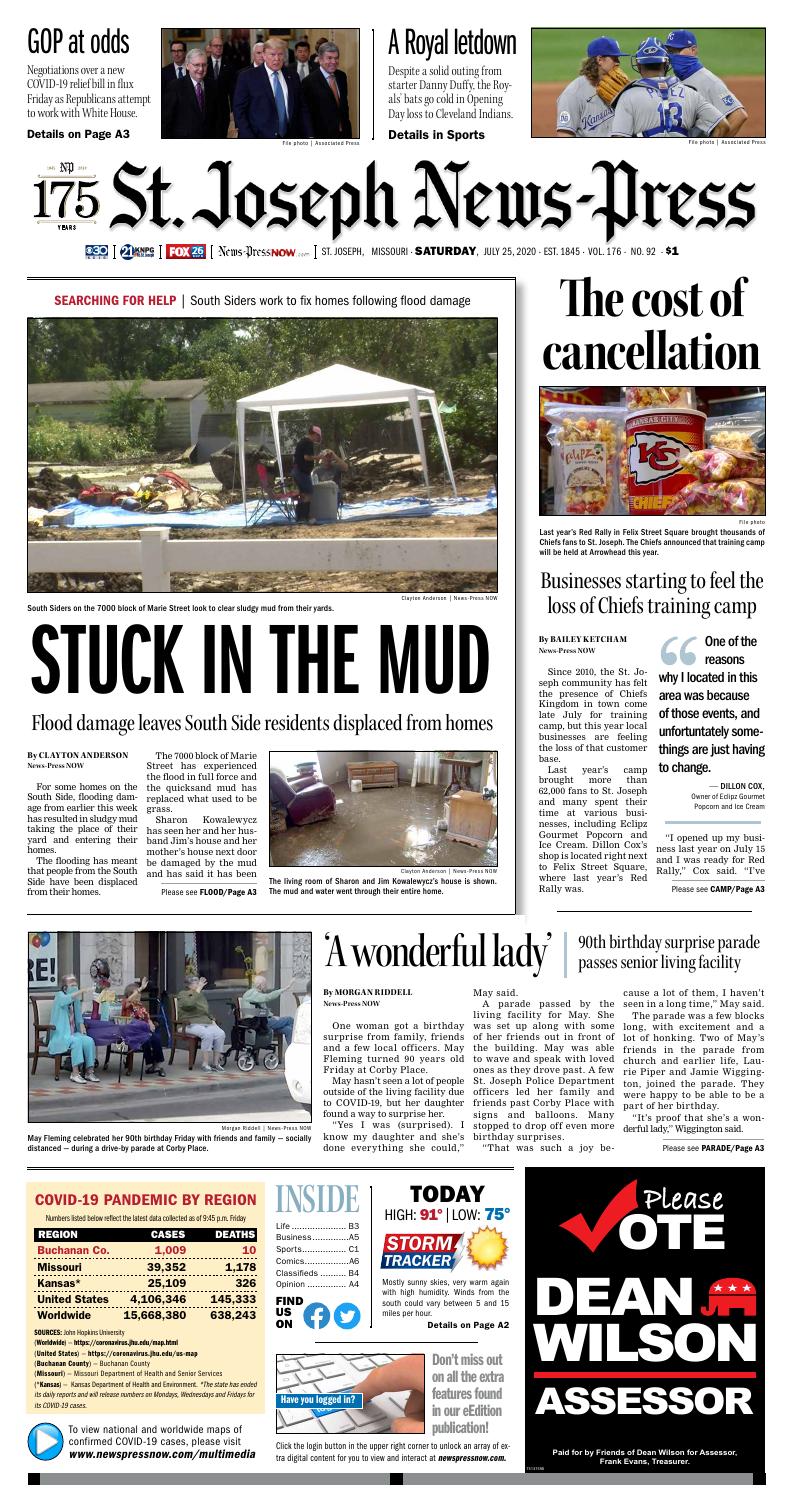 South Siders on the 7000 block of Marie Street look to clear sludgy mud from their yards.

The living room of Sharon and Jim Kowalewycz’s house is shown. The mud and water went through their entire home.

Buchanan County workers remove any furniture or items from the front of houses impacted by the flood.

For some homes on the South Side, flooding damage from earlier this week has resulted in sludgy mud taking the place of their yard and entering their homes.

The flooding has meant that people from the South Side have been displaced from their homes.

The 7000 block of Marie Street has experienced the flood in full force and the quicksand mud has replaced what used to be grass.

Sharon Kowalewycz has seen her and her husband Jim’s house and her mother’s house next door be damaged by the mud and has said it has been an emotional week.

“People don’t know what you do when you go through this,” Sharon Kowalewycz said. “I’ve cried all week. It’s like, what use is it to cry and it’s not like it is doing any good.”

The community on Marie Sreet expressed frustration and said they had not seen much support from the city or the county.

“The thing that gripes me is if something like this happened on Ashland Avenue, Frederick Avenue, Noyes Boulevard, the city would be up and down through here and this would have been cleaned up in two days,” Jim Kowalewycz said.

Western District Buchanan County Commissioner Ron Hook said the process for cleanup may take a bit, but he said a variety of different groups are working together to provide the cleanup.

“I do understand that people are anxious to get back in their homes as quick as possible. This area that’s down there was hit pretty hard,” Hook said. “We’re having an effort right now and trying to get dumpsters to people.”

Hook said around 200 households were impacted, and they are looking to help people move items out of their house.

Sharon and Jim said they are thankful to have flood insurance, but they are worried for their neighbors who don’t. They said the work being done has been a community effort and all they can do is hope.

“I guess you have to take it one day at a time. We go to church, we believe in the Lord and the Lord is going to take care of us,” Sharon Kowalewycz said.

The reality of the cleanup could be overwhelming.

“It’s just a mess.” Jim Kowalewycz said. “What can you do with this stuff?”

The American Red Cross is currently helping displaced families go to a hotel for four to five nights.

Eclipz plans to make Chiefs gourmet popcorn throughout the football season. The shop opened for the first time right before the Chiefs 2019 training camp.

Il Lazzarone advertises with 810 Sports Radio at Chiefs training camp each year to bring in customers. The restaurant is used to long lines out the door after camp each day.

Last year’s Red Rally in Felix Street Square brought thousands of Chiefs fans to St. Joseph. The Chiefs announced that training camp will be held at Arrowhead this year.

Since 2010, the St. Joseph community has felt the presence of Chiefs Kingdom in town come late July for training camp, but this year local businesses are feeling the loss of that customer base.

Last year’s camp brought more than 62,000 fans to St. Joseph and many spent their time at various businesses, including Eclipz Gourmet Popcorn and Ice Cream. Dillon Cox’s shop is located right next to Felix Street Square, where last year’s Red Rally was.

“I opened up my business last year on July 15 and I was ready for Red Rally,” Cox said. “I’ve only had one season of what I thought was going to be my normal or how I would base my sales.”

This year the square is a lot quieter not only because events like the Red Rally aren’t happening, but also in part because barely any events are taking place Downtown.

“One of the reasons why I located in this area was because of those events, and unfortunately some things are just having to change because I no longer have that traffic,” Cox said.

Another business that loses out on a significant amount of traffic is the wood-fired pizza spot, Il Lazzarone. Manager Ronnie Phroper said it’s a whole different atmosphere inside the restaurant during camp days.

“It’s typically the complete opposite of what you see right now,” Phroper said. “We do a lot of advertising with 810 Sports Radio so everyone at training camp hears about us.”

By the end of camp days, Phroper said the restaurant would have close to 40 people lined up outside the door.

“It killed us and it killed everyone in town because there’s no way it’s not good business for everyone and this town really needs it and it’s just not happening,” Phroper said.

Both businesses already had been seeing slower foot traffic due to the pandemic and residents being cautious about going into places.

In order to still celebrate the season, Cox plans on having his Chiefs popcorn again, along with popcorn for additional NFL teams.

Cox and Phroper agree that the next month will be hard for business, but they are looking forward to Chiefs Kingdom returning to St. Joe next summer.

May Fleming celebrated her 90th birthday Friday with friends and family — socially distanced — during a drive-by parade at Corby Place.

One woman got a birthday surprise from family, friends and a few local officers. May Fleming turned 90 years old Friday at Corby Place.

May hasn’t seen a lot of people outside of the living facility due to COVID-19, but her daughter found a way to surprise her.

“Yes I was (surprised). I know my daughter and she’s done everything she could,” May said.

A parade passed by the living facility for May. She was set up along with some of her friends out in front of the building. May was able to wave and speak with loved ones as they drove past. A few St. Joseph Police Department officers led her family and friends past Corby Place with signs and balloons. Many stopped to drop off even more birthday surprises.

“That was such a joy because a lot of them, I haven’t seen in a long time,” May said.

The parade was a few blocks long, with excitement and a lot of honking. Two of May’s friends in the parade from church and earlier life, Laurie Piper and Jamie Wiggington, joined the parade. They were happy to be able to be a part of her birthday.

“Very wonderful, she’s impacted a lot of lives in her life,” Piper said.

May sat with a birthday crown and mask as people passed. A table with flowers next to May filled up with gifts and cards from people in the parade.

“I think if anybody could have a birthday like I’ve had, it’d be a blessing.”

May couldn’t thank her friends and family for coming out enough.

“I want to thank everyone more than once for what a beautiful day they made it. Because I’m not used to having all this,” May said.

After the parade, she had lunch and cake in the living facility. May said the excitement of the day tired her out. 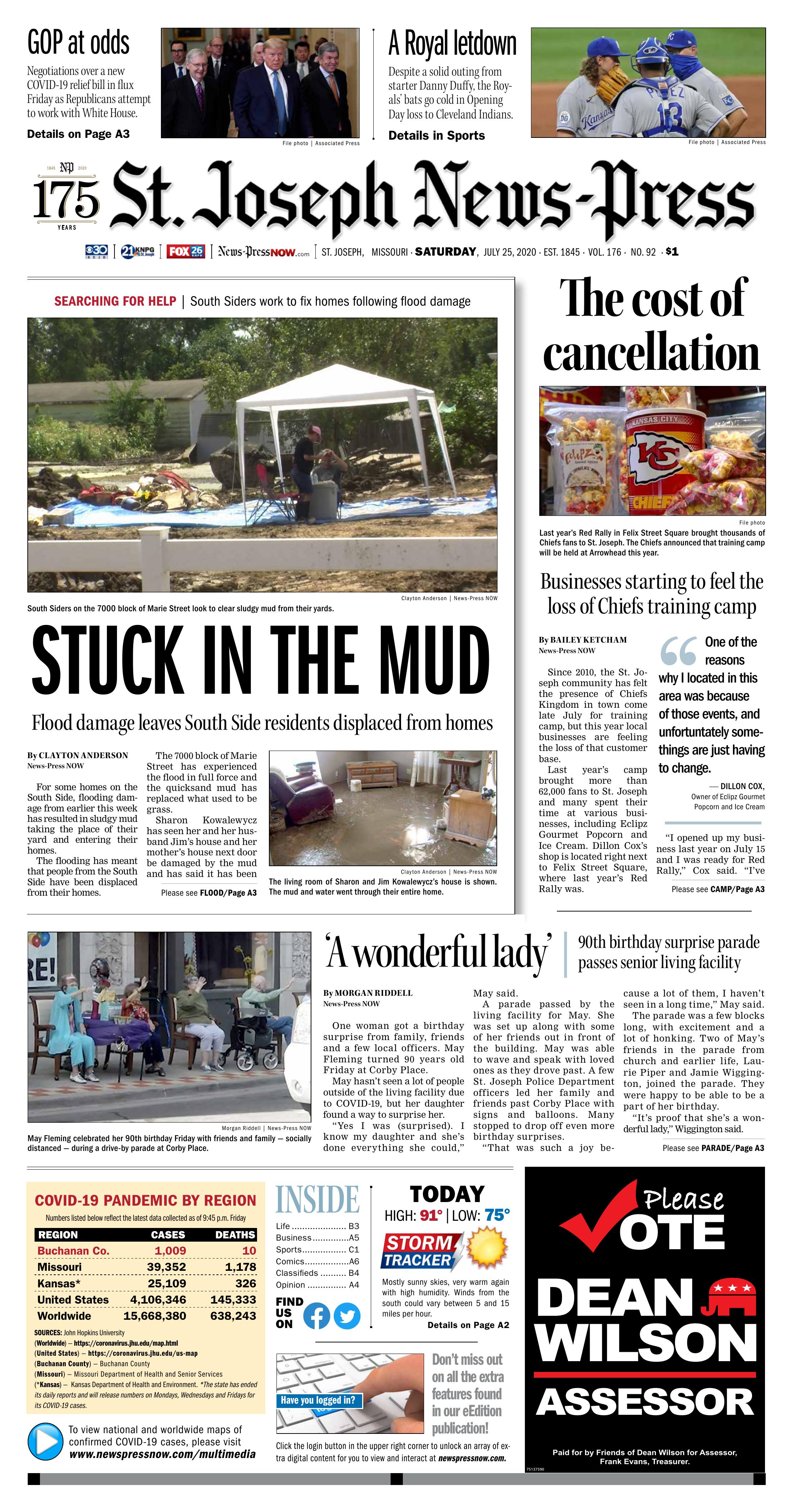