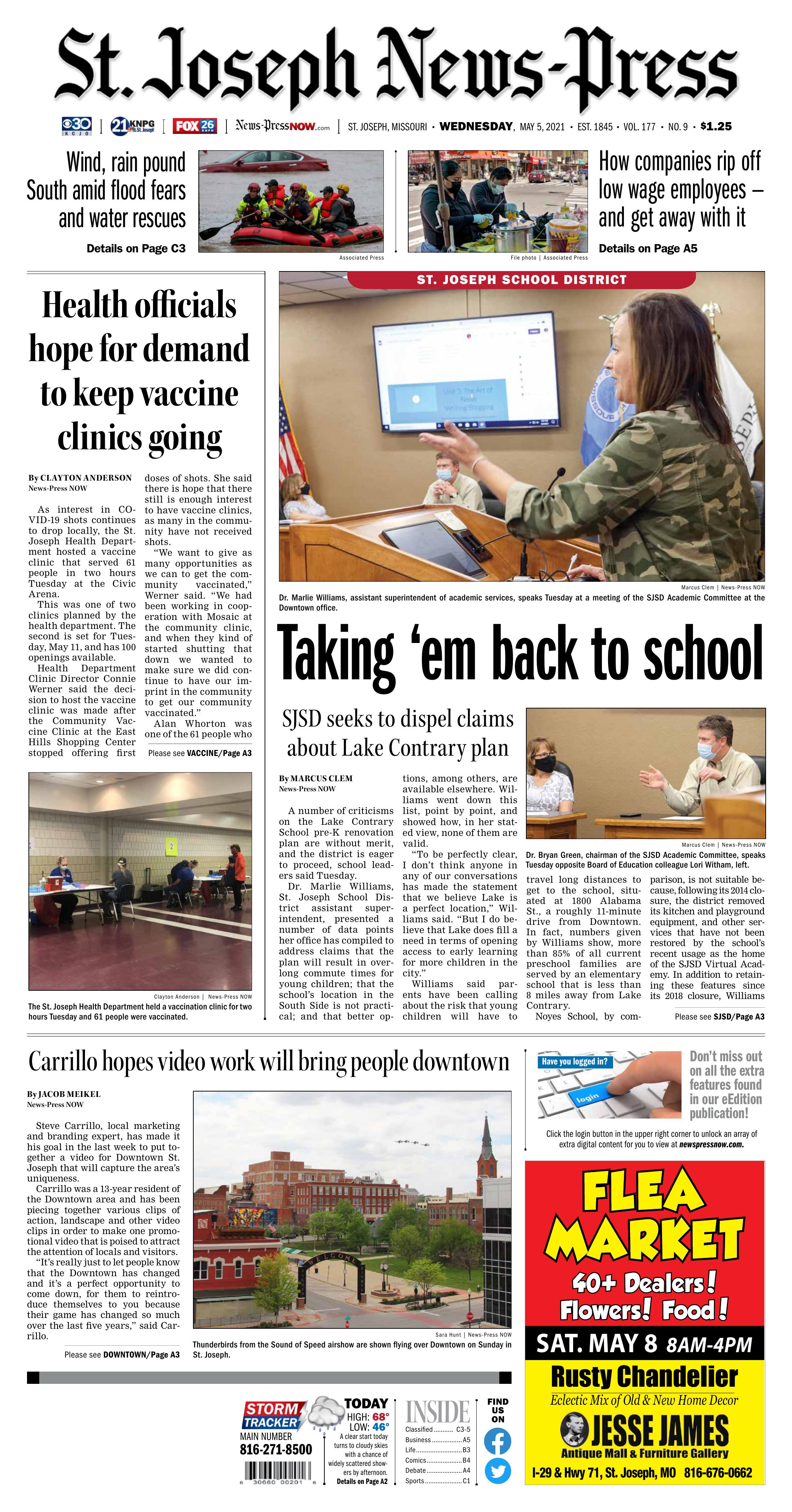 Laurie Witham, member of the Board of Education, points to a video monitor while asking a question at a Tuesday meeting of the SJSD Academic Committee.

Dr. Marlie Williams, assistant superintendent of academic services, speaks Tuesday at a meeting of the SJSD Academic Committee at the Downtown office.

A number of criticisms on the Lake Contrary School pre-K renovation plan are without merit, and the district is eager to proceed, school leaders said Tuesday.

Dr. Marlie Williams, St. Joseph School District assistant superintendent, presented a number of data points her office has compiled to address claims that the plan will result in overlong commute times for young children; that the school’s location in the South Side is not practical; and that better options, among others, are available elsewhere. Williams went down this list, point by point, and showed how, in her stated view, none of them are valid.

“To be perfectly clear, I don’t think anyone in any of our conversations has made the statement that we believe Lake is a perfect location,” Williams said. “But I do believe that Lake does fill a need in terms of opening access to early learning for more children in the city.”

Williams said parents have been calling about the risk that young children will have to travel long distances to get to the school, situated at 1800 Alabama St., a roughly 11-minute drive from Downtown. In fact, numbers given by Williams show, more than 85% of all current preschool families are served by an elementary school that is less than 8 miles away from Lake Contrary.

Noyes School, by comparison, is not suitable because, following its 2014 closure, the district removed its kitchen and playground equipment, and other services that have not been restored by the school’s recent usage as the home of the SJSD Virtual Academy. In addition to retaining these features since its 2018 closure, Williams observed, Lake Contrary is situated on one floor, a significant safety and accessibility advantage.

Per Williams, this is especially important because the school district — as have many of its peers — anticipates low-incidence classrooms will be in ever-increasing demand. “Low-incidence” refers to a class of delayed/disadvantaged development conditions and disabilities experienced by preschool-age children.

Board member David Foster inquired as to the advantage of a single preschool site. Williams told him this enhances staff collaboration, and supports boons such as the ability to provide hot meals to kids, instead of boxed meals for elsewhere.

“That collaboration is priceless, and then the kids benefit from that,” Board President Tami Pasley said. “And yes, it’s a benefit for teachers, but they still collaborate across town. This way, the child — every single child — will benefit from all of the collaboration of our teachers, right there. And what one teacher notices, or another teacher is especially good at, the benefit to the students is just ... You can’t put a price on it.”

Board member Kenneth Reeder, a critic of the Lake Contrary plan, did not attend.

As interest in COVID-19 shots continues to drop locally, the St. Joseph Health Department hosted a vaccine clinic that served 61 people in two hours Tuesday at the Civic Arena.

This was one of two clinics planned by the health department. The second is set for Tuesday, May 11, and has 100 openings available.

Health Department Clinic Director Connie Werner said the decision to host the vaccine clinic was made after the Community Vaccine Clinic at the East Hills Shopping Center stopped offering first doses of shots. She said there is hope that there still is enough interest to have vaccine clinics, as many in the community have not received shots.

Alan Whorton was one of the 61 people who received a shot Tuesday at the vaccine clinic. He said it was an easy process and is glad he made the decision to get the vaccine. He also said he will encourage people he knows to do so as well.

“It was very easy. I would recommend it to anyone who wants to do it,” Whorton said. “I’ll still probably wear a mask, but it’s still just good to have that extra confidence.”

Sign-ups for the May 11 clinic are open and registration can be done at signup.com/go/tNdgirq.

The future of vaccination clinics will depend on the demand, which is already falling. In Buchanan County, the percent of people who have received at least one dose of a COVID-19 vaccine is under 20%.

Werner said officials are going to try to be involved with the vaccination process and have the capability to host clinics at the Civic Arena if demand is still there.

“The COVID virus is still in our community, the variations of the COVID virus are out in the world, so COVID isn’t going away just because we want it to be gone,” Werner said.

Thunderbirds from the Sound of Speed Airshow are shown flying over Downtown on Sunday in St. Joseph, Missouri.

The Downtown Community Improvement District of St. Joseph launched a new website for Downtown St. Joseph just several months ago as a way for visitors to browse the different businesses and attractions throughout Downtown.

Steve Carrillo, local marketing and branding expert, has made it his goal in the last week to put together a video for Downtown St. Joseph that will capture the area’s uniqueness.

Carrillo was a 13-year resident of the Downtown area and has been piecing together various clips of action, landscape and other video clips in order to make one promotional video that is poised to attract the attention of locals and visitors.

“It’s really just to let people know that the Downtown has changed and it’s a perfect opportunity to come down, for them to reintroduce themselves to you because their game has changed so much over the last five years,” said Carrillo.

Carrillo’s Downtown campaign video has been seen in shorter versions on the Downtown St. Joseph Facebook page and is expected to be seen in an extended format soon. His method of hooking the audience the second they see the short version or extended version is one many video production experts will use.

Carrillo was approached with the idea of doing a video for Downtown by Felix Street Gourmet and Room 108 owner, Pat Modlin, with whom Carrillo had done video work previously.

“Getting with Steve, he’s so creative. We talked about how we create a kind of a theme for people to get out and walk around. Just talking with Steve, he has so many ideas and just kind of ran with it,” said Modlin.

The last 12 months for Downtown has made for some turbulence and some excitement. From the welcoming of migrating businesses such as Hazel’s Coffee and Three Wishes Bakery to the closing and reopening of businesses like Brioche Cafe and Bakery and Felix Street Pub, Carrillo’s video production will have a specific goal in mind.

Related
1:57 Bringing Attention To Downtown St Joseph
Updated May 4, 2021
Back

On the Contrary, It's a Good Idea, SJSD says