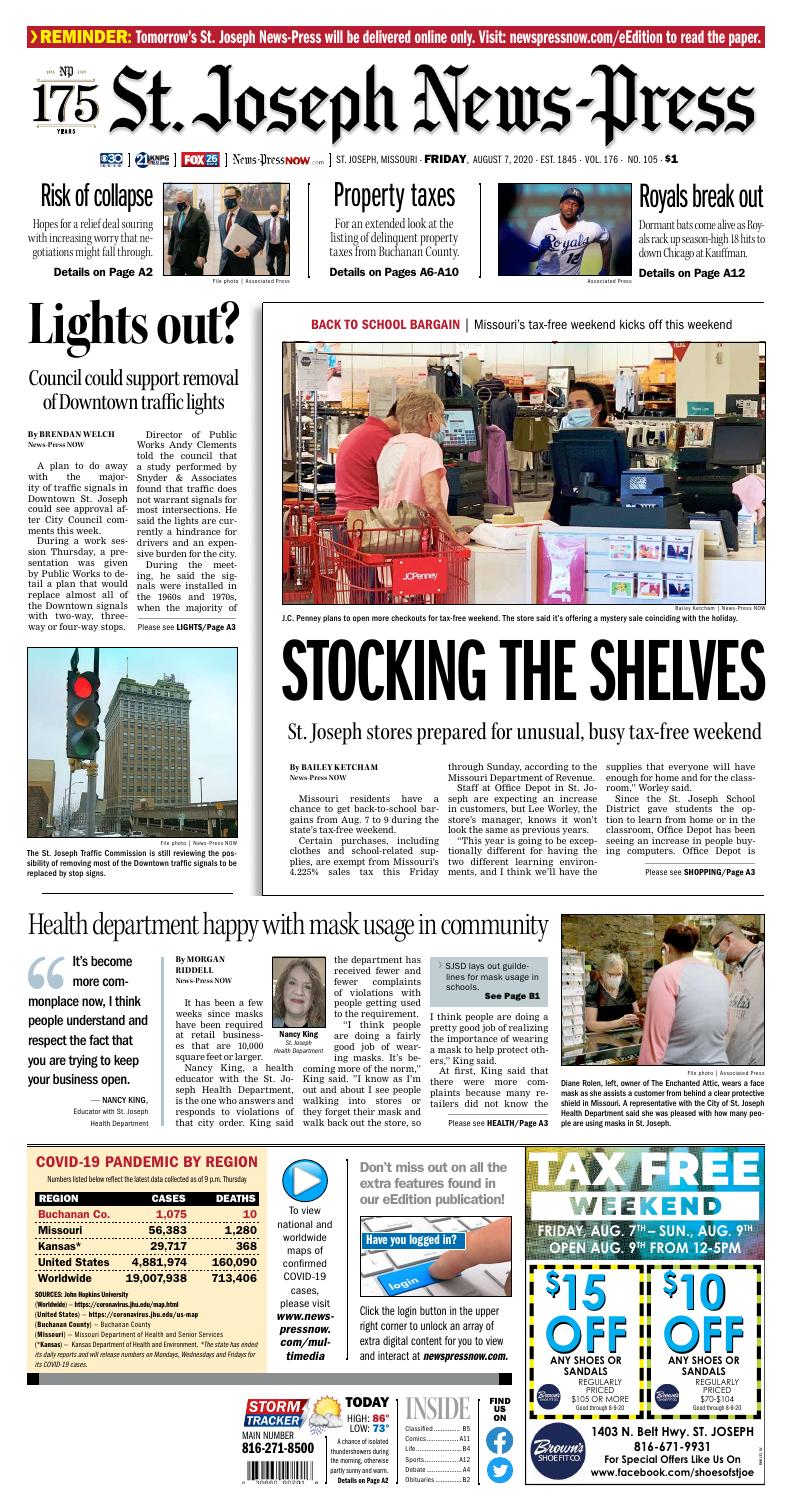 The St. Joseph City Council passed an ordinance on September 8 that will see all but two of the city’s downtown stoplights removed.

A graphic showing proposed changes to intersections in the Downtown St. Joseph corridor

A plan to do away with the majority of traffic signals in Downtown St. Joseph could see approval after City Council comments this week.

During a work session Thursday, a presentation was given by Public Works to detail a plan that would replace almost all of the Downtown signals with two-way, three-way or four-way stops.

Director of Public Works Andy Clements told the council that a study performed by Snyder & Associates found that traffic does not warrant signals for most intersections. He said the lights are currently a hindrance for drivers and an expensive burden for the city.

During the meeting, he said the signals were installed in the 1960s and 1970s, when the majority of the city’s shopping took place Downtown and there weren’t highways that diverted traffic around the area.

“That is really not a good thing to have your method of traffic control that was designed for a downtown area literally being the same 50 years later when the downtown is completely different,” Clements told the Council.

The majority of council members viewing via Zoom felt that the change would be good for the city, though there were some concerns.

Councilmember P.J. Kovac suggested that there be effective ways to go each direction through Downtown, and does not want to see too many four-way stops that could cause congestion. Clements said the study only suggests four-ways at the busiest intersections, and there is planned flow for every direction.

There also was talk about how the change could affect response times for police, fire and EMS crews that have to go through the Downtown district.

Police Chief Chris Connally, who also is the interim city manager, said he has looked at the study and believes it would be beneficial for everyone driving in the area, including emergency services.

“It sounds like it’ll work well for everybody, make it a little easier for all of us to move Downtown,” Connally said. “I like what was said about emergency services. Those lights take up time, (they cause ) a little more time to get places. I think it’ll be helpful.”

Mayor Bill McMurray said he would be happy to vote for the change if it is what the professionals believe is best, but he invites the public to get involved.

“I’m no traffic engineer, so I’ll trust the experts,” McMurray told News-Press NOW. “This is their recommendation and they’re going to put an ordinance before the council ... probably in a couple of meetings. Come on down and voice your opinion about it.”

The St. Joseph Traffic Commission saw several drafts of the study done by Snyder and voted to recommend approving the plan in March of this year.

The work session on Thursday where the traffic signal changes were discussed also was a weekly update on the COVID-19 pandemic.

Data from the City of St. Joseph Health Department and Professor Gary Clapp of Missouri Western State University both show seven-day average figures that suggest a decline in local cases. McMurray said graphs suggesting that daily numbers and hospitalizations have been staying flat or slightly going down mean no changes will be made to the current emergency order, which only requires that masks be worn inside retail stores of 10,000 square feet or more.

That order is set to expire next month and will continue to be reviewed weekly.

Office Depot expects to sell a large amount of computers during tax-free weekend. The computers are offered throughout the weekend without Missouri’s 4.225% sales tax.

Missouri residents have a chance to get back-to-school bargains from Aug. 7 to 9 during the state’s tax-free weekend.

Certain purchases, including clothes and school-related supplies, are exempt from Missouri’s 4.225% sales tax this Friday through Sunday, according to the Missouri Department of Revenue.

Staff at Office Depot in St. Joseph are expecting an increase in customers, but Lee Worley, the store’s manager, knows it won’t look the same as previous years.

“This year is going to be exceptionally different for having the two different learning environments, and I think we’ll have the supplies that everyone will have enough for home and for the classroom,” Worley said.

Since the St. Joseph School District gave students the option to learn from home or in the classroom, Office Depot has been seeing an increase in people buying computers. Office Depot is working with the school district, which is completing a bid process for 500 computers.

Along with school supplies, Office Depot has a large stock of personal protective equipment.

“You can get your mask, thermometer, hand sanitizer and things you’ll need both for home and in the classroom,” Worley said.

J.C. Penney is also expecting an increase in traffic from Friday to Sunday. Lindsey Davis, store manager, said they’ve scheduled more employees to be working this weekend to stay prepared.

“We’re also doing the best we can to open up additional check-out areas,” Davis said.

Even though some students won’t be returning to the classroom, staff at the store still expect kids will be needing clothes for home and school.

“We have $10 kids cuts in the salon and we also have a mystery sale coinciding with tax-free,” Davis said.

Saturday is expected to be the busiest day of the weekend, but the stores warn that there will be an increase in traffic all weekend and advise customers can also take place in online shopping with curbside pick-up.

It has been a few weeks since masks have been required at retail businesses that are 10,000 square feet or larger.

Nancy King, a health educator with the St. Joseph Health Department, is the one who answers and responds to violations of that city order. King said the department has received fewer and fewer complaints of violations with people getting used to the requirement.

“I think people are doing a fairly good job of wearing masks. It’s becoming more of the norm,” King said. ”I know as I’m out and about I see people walking into stores or they forget their mask and walk back out the store, so I think people are doing a pretty good job of realizing the importance of wearing a mask to help protect others,” King said.

At first, King said that there were more complaints because many retailers did not know the exact square footage of their building. When there was an issue, health department staff would contact businesses and explain the situation. Now, King encourages even smaller businesses to place their own requirements regardless of square footage.

“That doesn’t mean that a business cannot require masks for people entering their store. I think it’s become more commonplace now, I think people understand and respect the fact that you are trying to keep your business open and so you want to make sure your employees are protected as well as the customers coming in,” King said.

King added there are a few exceptions to the mask requirement for people with medical needs. She said people have been responsible about not taking advantage of that and have been receptive to mask-required signage.

“I think people are responsible and they don’t take advantage of that exception to the rule and only use it when it truly applies to their situation,” she said. “It’s just a piece of fabric on your face that you’re going to wear very briefly while you’re in the store, but it can protect the people around you.”

King encourages continued social distancing and mask usage while in any public setting.

The health department has an active COVID-19 hotline for people with questions regarding the ongoing pandemic and any updates they might seek. It can be reached at 816-271-4613. 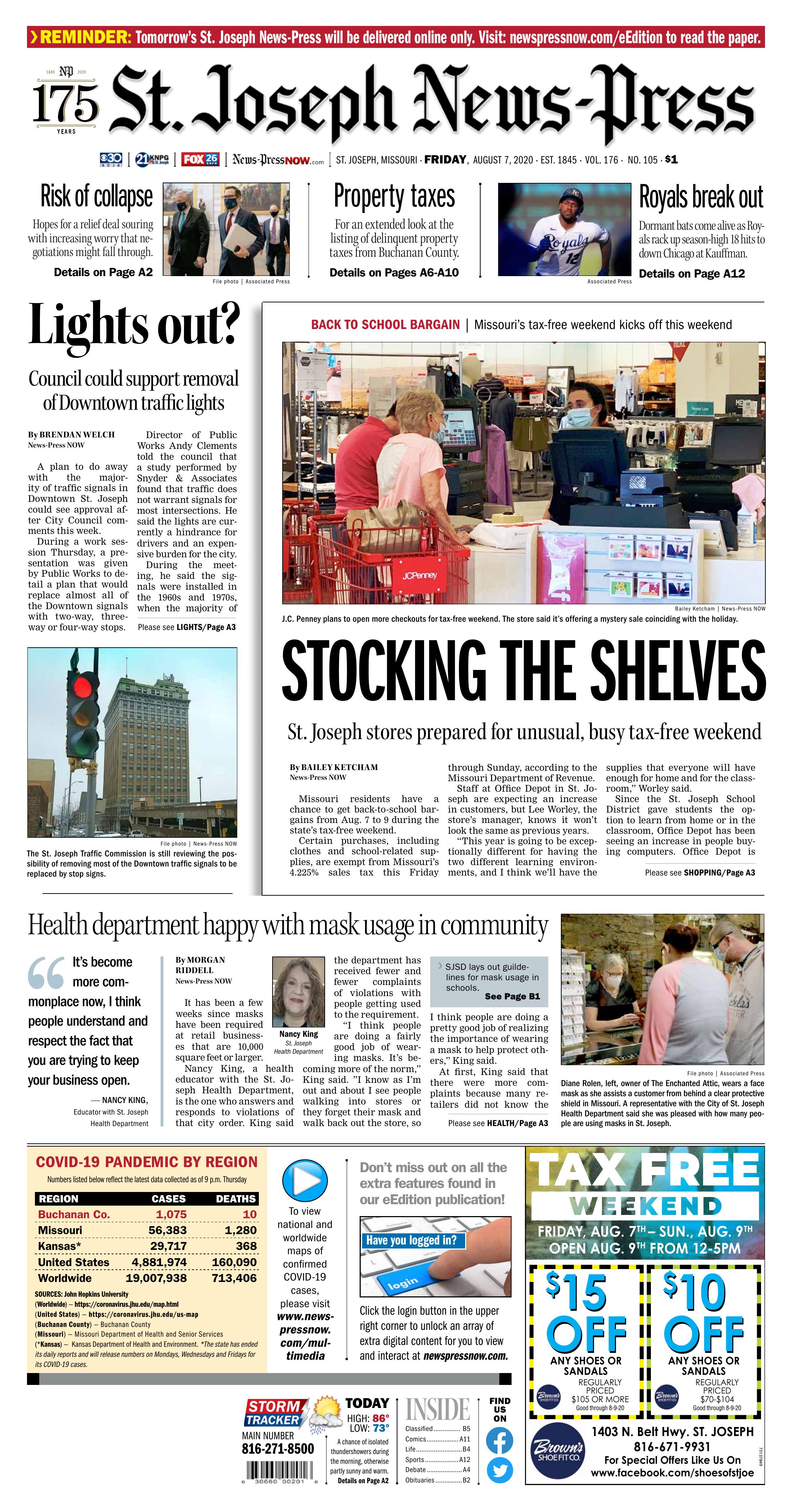