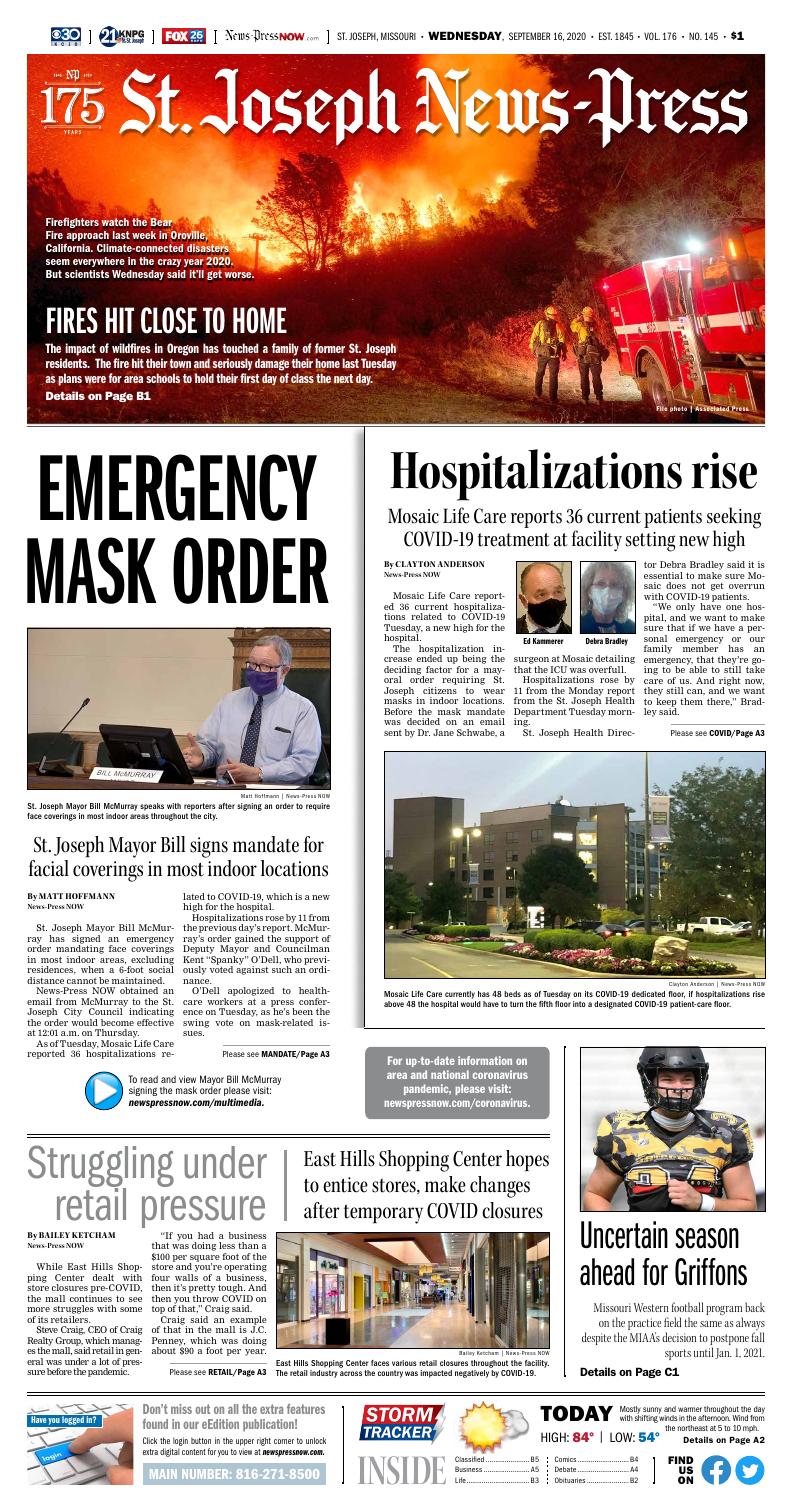 The impact of wildfires in Oregon has touched a family of former St. Joseph residents. The fire hit their town and seriously damage their home last Tuesday as plans were for area schools to hold their first day of class the next day.

Details on Page B1

While East Hills Shopping Center dealt with store closures pre-COVID, the mall continues to see more struggles with some of its retailers.

Steve Craig, CEO of Craig Realty Group, which manages the mall, said retail in general was under a lot of pressure before the pandemic.

“If you had a business that was doing less than a $100 per square foot of the store and you’re operating four walls of a business, then it’s pretty tough. And then you throw COVID on top of that,” Craig said.

Craig said an example of that in the mall is J.C. Penney, which was doing about $90 a foot per year. J.C. Penney filed for Chapter 11 bankruptcy protection in May after temporary store closures due to the pandemic accelerated the company’s troubles.

“It was announced that Brookfield and Simon Property Group are going to buy the company and operate most all of the stores, and I’m hoping St. Joseph won’t be one of the ones closing,” Craig said.

East Hills currently has 42 retailers. A few stores that recently closed at the mall are Gordmans, Victoria Secret and its sister store Pink, Justice and The Children’s Place.

A Victoria Secret spokesperson said in May the business announced a significant reorganization of the company-owned store footprint and estimated closing approximately 250 stores in the U.S. and Canada in 2020.

Craig said malls are going to continue to see companies close that were on the edge and struggling before the pandemic.

“Now it’s our opportunity to build back, and I suspect some of that build back will not be retail but maybe more entertainment and food oriented,” Craig said.

Craig plans to look at working with more local businesses and said one in particular that he’s enjoyed helping build back up is Leibowitz Menswear.

Myles Antle, Leibowitz manager, said members of that business are thankful that they’ve been able to quickly adapt to the ongoing changes.

“We’ve been doing well and we’re lucky because we have a lot of good support and good customers,” Antle said.

Antle reiterates the negative impact COVID has had on the retail industry, but he said he’s excited for the mall’s future and to see more local businesses come into the area.

“Small businesses really do make up the community and it’s good to have all the local shops you can around you because it brings like-minded shoppers,” Antle said.

Two other local businesses Craig has enjoyed seeing progress in the mall are Lino’s Pizza and VanZino’s BBQ.

“They’re knocking it out of the park and doing a fantastic job in there,” Craig said.

Within the next month Craig said the mall will see a local jeweler move in and a local florist will occupy the last vacant location on the outside of the mall next to Rally House.

“It won’t be what it was, but it’ll be a variety of uses and it’ll still be an important center piece for the community,” Craig said.

St. Joseph Mayor Bill McMurray speaks with reporters after signing an order to require face coverings in most indoor areas throughout the city.

News-Press NOW obtained an email from McMurray to the St. Joseph City Council indicating the order would become effective at 12:01 a.m. on Thursday.

As of Tuesday, Mosaic Life Care reported 36 hospitalizations related to COVID-19, which is a new high for the hospital.

Hospitalizations rose by 11 from the previous day’s report. McMurray’s order gained the support of Deputy Mayor and Councilman Kent “Spanky” O’Dell, who previously voted against such an ordinance.

O’Dell apologized to health-care workers at a press conference on Tuesday, as he’s been the swing vote on mask-related issues.

“And I didn’t know this could happen so fast,” O’Dell said. “But here on Tuesday we’re at 36 (people hospitalized) and it’s just going too fast.”

Prior to the order’s signing, Mosaic Life Care physician Dr. Jane Schwabe sent an email to all city council members describing an “over full” ICU. Schwabe also called for the type of mandate McMurray later signed.

Madison Davis, Gary Roach, PJ Kovac and Marty Novak, four council members who have voted against any sort of mask mandate, didn’t respond to a request for comment for this story. Without O’Dell’s support, the voting group would be unable to overturn the order.

Brian Myers, perhaps the most vocal city council member in support of a broad mask mandate, said in an email that he supported the mayor’s decision. Brenda Blessing and Russell Moore, the remaining council members, also didn’t respond to a request for comment.

St. Joseph’s mandate lags behind similar orders enacted in Platte County and Maryville, Missouri, in July. The Centers for Disease Control and Prevention has called for the use of masks since at least April.

To date, 19 people have died from COVID-19 in Buchanan County. In July, when the orders were enacted by nearby governments, Buchanan County drew the scrutiny of the White House because of the county’s infection rate.

“As I’ve told you before, it’s about the numbers,” McMurray said at the Tuesday press conference. “Back in June and July, we didn’t go from 16 to 36 people in the hospital.”

McMurray said the key metric he tracks is the hospitalization rate, something he told News-Press NOW in July.

Under the mayor’s order, only owners and managers of establishments can be fined for violating the rule, not members of the public who refuse to comply. The St. Joseph Health Department has been charged with enforcing the mayor’s previous mask orders.

Buchanan County officials now will have to decide if the order will be expanded to rural areas. County commissioners told News-Press NOW they intend to decide the issue within 24 hours, but the vote could be pushed to Thursday because of public notice requirements.

Mosaic Life Care currently has 48 beds as of Tuesday on its COVID-19 dedicated floor, if hospitalizations rise above 48 the hospital would have to turn the fifth floor into a designated COVID-19 patient-care floor.

The hospitalization increase ended up being the deciding factor for a mayoral order requiring St. Joseph citizens to wear masks in indoor locations. Before the mask mandate was decided on an email sent by Dr. Jane Schwabe, a surgeon at Mosaic detailing that the ICU was overfull.

Hospitalizations rose by 11 from the Monday report from the St. Joseph Health Department Tuesday morning.

St. Joseph Health Director Debra Bradley said it is essential to make sure Mosaic does not get overrun with COVID-19 patients.

“We only have one hospital, and we want to make sure that if we have a personal emergency or our family member has an emergency, that they’re going to be able to still take care of us. And right now, they still can, and we want to keep them there,” Bradley said.

Mosaic Life Care has 48 beds on their designated COVID-19 fourth floor. Dr. Edward Kammerer, Chief Quality Officer at Mosaic, said once the COVID-19 inpatient count gets to 48 there will start to be concern as they would have to open up the negative pressure 48-bed fifth floor which would require for them to move all patients that are currently on the floor.

Mosaic currently has five COVID-19 patients in the intensive care unit in a pod. Kammerer said that the hospital tries to provide as many ICU services to the fourth floor as possible so they don’t have to create another pod in the ICU and push out patients that are there for non COVID issues.

“The concern when it comes to ICU beds and these type of issues is, ‘How do we make sure that we provide the essential services?’ We may have to talk about stopping some of those elective things ts we have the nursing and the personnel to take care of the COVID patients if the numbers continue to go up,” Kammer said.

Staffing will be another concern Mosaic may have to address Kammerer said. He said taking care of a COVId-19 patient takes twice the nurses as a normal patient would take.

“Normally, we would have about four patients per one nurse. And so, that nurse is responsible for taking care of four patients. On the COVID ward, we broke that down to one and two, because you have to do a lot more for them, you have to put all your gear on in order to go in every time you come out, you gotta take your gear off, it just is a lot more time intensive,” Kammerer said.

The full interview regarding hospitalization spike with Dr. Edward Kammerer

Missouri Western football program back on the practice field the same as always despite the MIAA’s decision to postpone fall sports until Jan. 1, 2021. 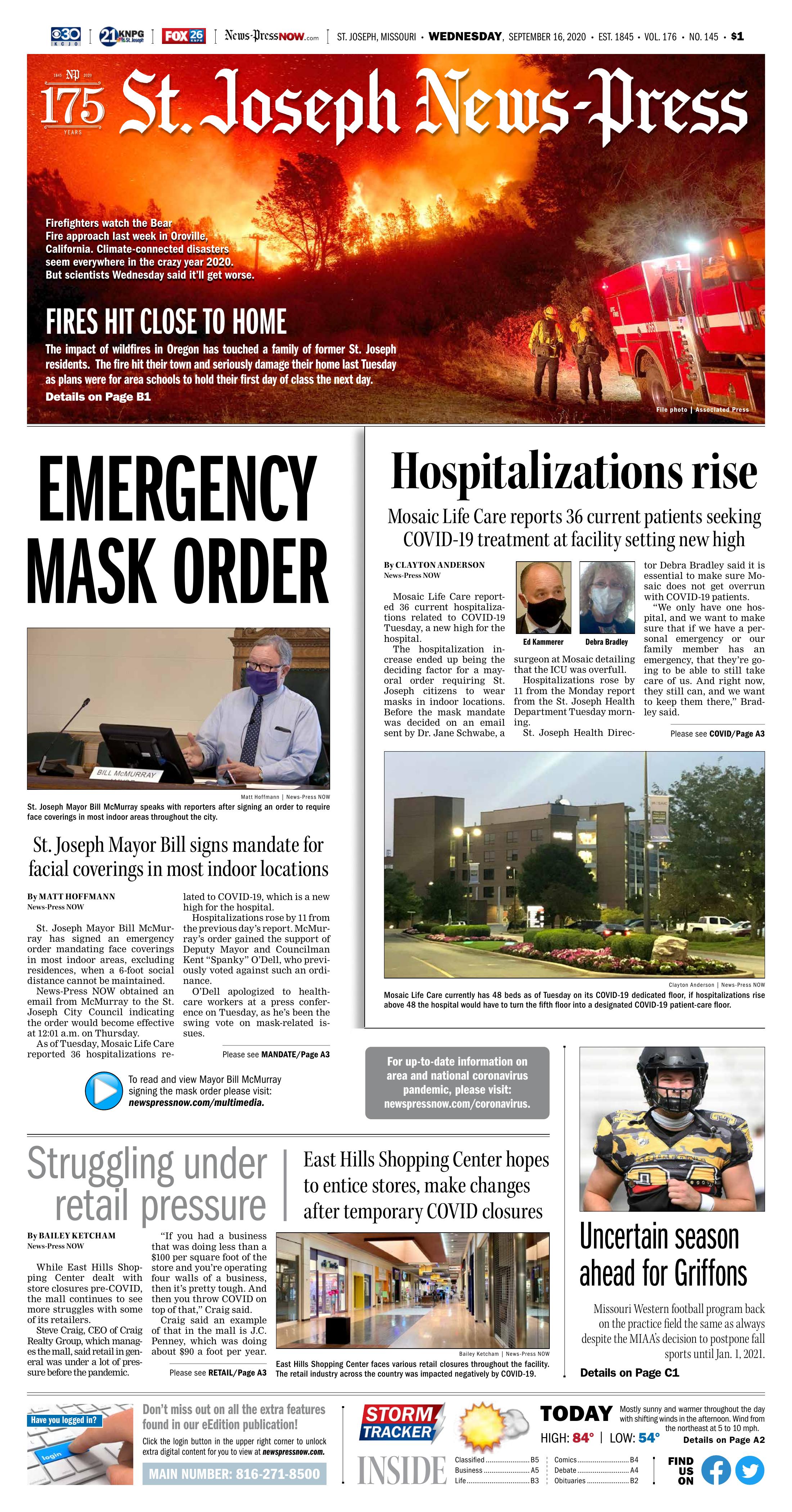