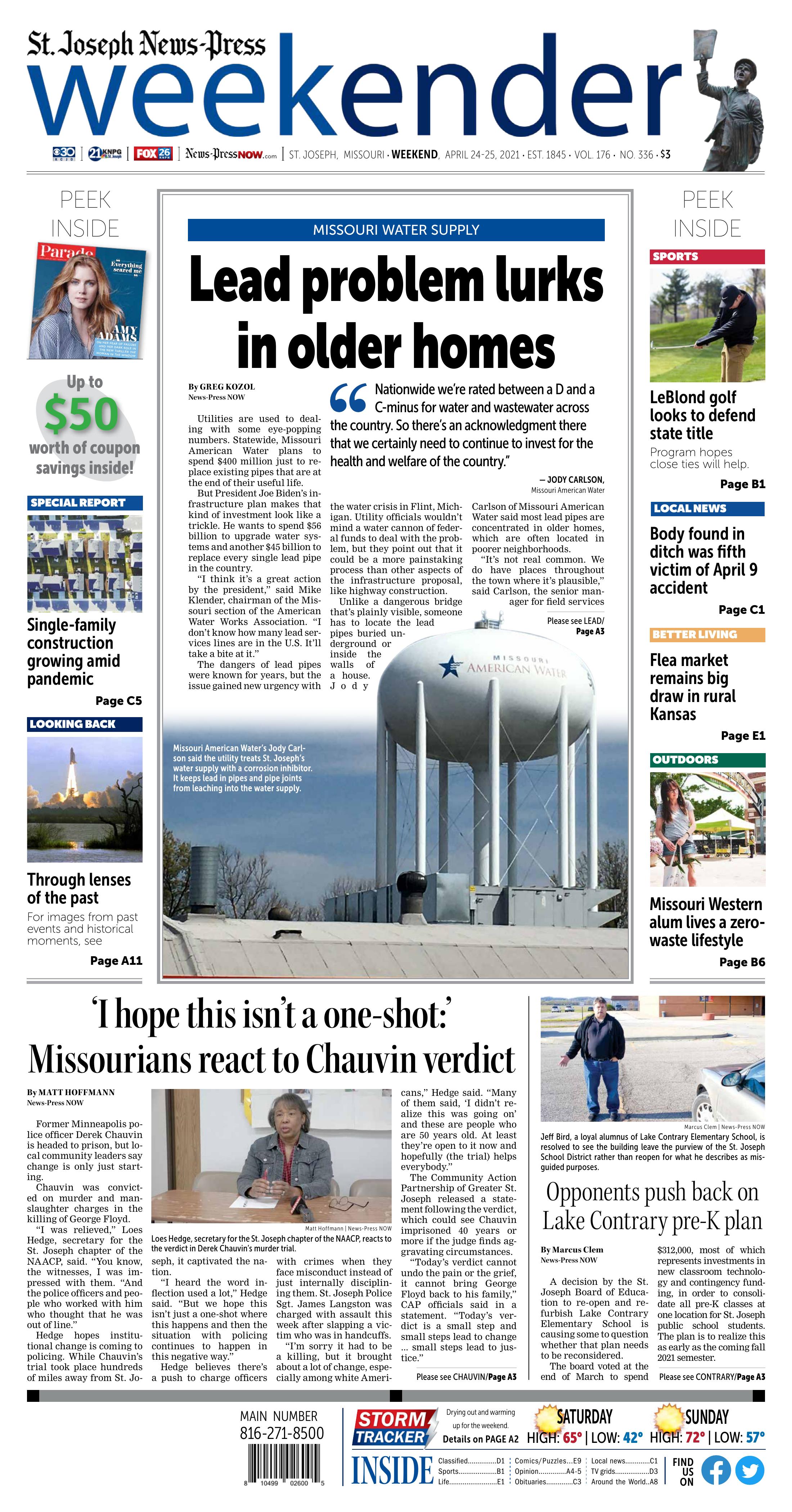 Utilities are used to dealing with some eye-popping numbers. Statewide, Missouri American Water plans to spend $400 million just to replace existing pipes that are at the end of their useful life.

But President Joe Biden’s infrastructure plan makes that kind of investment look like a trickle. He wants to spend $56 billion to upgrade water systems and another $45 billion to replace every single lead pipe in the country.

“I think it’s a great action by the president,” said Mike Klender, chairman of the Missouri section of the American Water Works Association. “I don’t know how many lead services lines are in the U.S. It’ll take a bite at it.”

The dangers of lead pipes were known for years, but the issue gained new urgency with the water crisis in Flint, Michigan. Utility officials wouldn’t mind a water cannon of federal funds to deal with the problem, but they point out that it could be a more painstaking process than other aspects of the infrastructure proposal, like highway construction.

Unlike a dangerous bridge that’s plainly visible, someone has to locate the lead pipes buried underground or inside the walls of a house. Jody Carlson of Missouri American Water said most lead pipes are concentrated in older homes, which are often located in poorer neighborhoods.

“It’s not real common. We do have places throughout the town where it’s plausible,” said Carlson, the senior manager for field services and production with the utility’s northwest operations. “Most often you see it on the inside of homes.”

The location is critical because it determines who is responsible for the lead pipes. In the past, Missouri American and other utilities would take responsibility for replacement up to the meter at a home or business. Changes in Environmental Protection Agency rules prompted Missouri American to replace some lead pipes all the way up to a home’s foundation.

“Our policy right now is if we are out, we’ve got a service that either is broken or leaking or things along those lines, we will replace that if there’s any indication that there’s been any lead there at all,” Carlson said.

He estimated the utility has replaced lead pipe infrastructure at 30 or 40 locations in St. Joseph this year, with the homeowner often urged to take a closer look inside the house itself.

Biden’s push to replace lead pipes comes as the EPA proposes an expansion of its Lead and Copper Rule, which is aimed at reducing lead exposure in drinking water. The agency is proposing a public inventory of lead service lines, testing requirements for schools and day cares and mandated replacement of utility-owned service lines when a property owner replaces lead pipes inside a house. The EPA will take public comment until December.

A core problem is that no one knows how many lead pipes exist locally or nationwide. The Missouri Department of Health lists Buchanan County as exceeding the state population-adjusted average for lead exposure in children, with 37 cases in 2018, but most of those incidents were not believed to involve drinking water.

A spokeswoman for the St. Joseph Health Department did not return a call seeking additional information.

Whether the problem is lead or just decaying infrastructure, Carlson said he welcomes the attention given to drinking water and wastewater in Washington, D.C. The Biden administration estimates that Missouri will need $8.9 billion for drinking water infrastructure in the next two decades.

“The important part is the recognition that nationwide there is a huge infrastructure need,” Carlson said. “Nationwide we’re rated between a D and a C-minus for water and wastewater across the country. So there’s an acknowledgment there that we certainly need to continue to invest for the health and welfare of the country.”

Loes Hedge, secretary for the St. Joseph chapter of the NAACP, reacts to the verdict in Derek Chauvin’s murder trial.

Chauvin was convicted on murder and manslaughter charges in the killing of George Floyd.

“I was relieved,” Loes Hedge, secretary for the St. Joseph chapter of the NAACP, said. “You know, the witnesses, I was impressed with them. “And the police officers and people who worked with him who thought that he was out of line.”

Hedge hopes institutional change is coming to policing. While Chauvin’s trial took place hundreds of miles away from St. Joseph, it captivated the nation.

“I heard the word inflection used a lot,” Hedge said. “But we hope this isn’t just a one-shot where this happens and then the situation with policing continues to happen in this negative way.”

Hedge believes there’s a push to charge officers with crimes when they face misconduct instead of just internally disciplining them. St. Joseph Police Sgt. James Langston was charged with assault this week after slapping a victim who was in handcuffs.

“I’m sorry it had to be a killing, but it brought about a lot of change, especially among white Americans,” Hedge said. “Many of them said, ‘I didn’t realize this was going on’ and these are people who are 50 years old. At least they’re open to it now and hopefully (the trial) helps everybody.”

The Community Action Partnership of Greater St. Joseph released a statement following the verdict, which could see Chauvin imprisoned 40 years or more if the judge finds aggravating circumstances.

“My view is that, as a former prosecutor, I trust juries,” Hawley said. “This jury heard lots and lots of testimony over many days, they deliberated for quite a number of hours, and I trust that they reached the right result.”

Hedge said she believes the Floyd family received both justice and accountability.

“If you commit a crime, and that is what the jury said that he did, that you need to pay for that with punishment, which is going to prison,” she said. “As for accountability, he was made to be judged. He was judged to be guilty.”

Jeff Bird, a loyal alumnus of Lake Contrary Elementary School, is resolved to see the building leave the purview of the St. Joseph School District rather than reopen for what he describes as misguided purposes.

A decision by the St. Joseph Board of Education to re-open and refurbish Lake Contrary Elementary School is causing some to question whether that plan needs to be reconsidered.

The board voted at the end of March to spend $312,000, most of which represents investments in new classroom technology and contingency funding, in order to consolidate all pre-K classes at one location for St. Joseph public school students. The plan is to realize this as early as the coming fall 2021 semester.

Jeff Bird, who spent his kindergarten through sixth grade years at Lake Contrary, is among those in the South Side who lamented its closure in 2018. He’s a proud alumnus of Benton High School, and his two sons walked for commencement in Cardinal red, the youngest in 2005. The neighborhood deserves more investment in locally oriented education, in his stated view.

As always, it’s about location, location, location. When a previous school board voted to trim its expenses in the midst of a budget crisis and shut Lake Contrary down, Bird noted, the school’s relative remoteness southwest on Alabama Street — relatively far from the core of the district — was cited as a reason why St. Joe could go without it. That has not changed.

“I think a more central location would be better,” said Bird, who is in favor of the basic idea of concentrating all pre-K services in one building. “In talking with parents and concerned voters, there is some concern about the kids traveling that far. And the district has said it has 2,000 empty seats (at the elementary school level). It seems there’s consolidation possible, maybe more centrally located.”

Board President Tami Pasley, who has previously called the Lake Contrary project “the best $312,000 we’ve ever spent for as long as I’ve been on the board,” declined to comment for this story.

Her new colleague on the board, Kenneth Reeder, has been somewhat more vocal. Unlike Bird, Reeder advocates against the idea of a pre-K consolidation. For reasons of geographic access and fairness, Reeder said — much like the more prominent high school debate — the district will be in need of at least two preschool facilities going forward, Reeder said.

It can start, he suggested, by shifting its St. Joseph Virtual Academy, which is housed at the former Noyes Elementary School, to space for preschoolers. Noyes is located near the center of the city. This idea is not embraced by the current SJSD administration.

"Noyes School would not be suitable for pre-school students," said Eileen Houston Stewart, director of communications, in a Monday statement sent to rebut Reeder. "It is not (U.S. Americans with Disabilities Act) compliant. No playground, no cafeteria facilities, too many stairs for small children to navigate, and restrooms are not suited for 3- and 4-year olds."

The coming school year likely will see fewer students studying online as the pandemic subsides. For his part, Reeder advanced the idea that Lake Contrary itself is not suitable for preschoolers.

“You can’t take an old building down there, right next door to the (industrial) plants, and ship our most tender children, ages 3, 4, and 5,” he said. “And put them on a bus for an hour."

On Monday, Houston-Stewart said that claim by Reeder on travel time is inaccurate, as most of the students involved live in Midtown and in the South Side neighborhood itself. However, Reeder said, the Lake Contrary project remains a "ridiculous idea."

Houston-Stewart said Monday that Reeder is incorrect; the cost to renovate Noyes for its current virtual academy purpose was $229,116, not "a million."

Bird said he perceives the Lake Contrary plan as a well-intentioned effort to respond to South Side frustration with the idea that the district does not place a high priority on serving them, from an education perspective. Nevertheless, “all things change with time.”

Bird said he believes the community already has moved on from Lake Contrary and will accept its permanent dispensation as a new plan is sought out. Public agencies often are not successful, he noted, in obtaining full market value for disused properties. Yet he embraces the cause of cutting back on unnecessary expenses to redirect more funds to currently-in-use education buildings. Spending more money here, he said, isn’t sensible.

“I am as loyal to Lake Contrary as anyone and hated to see it close,” he said. “But the district needs to make a decision and sell the building.”

Houston-Stewart said Lake Contrary, in fact, was selected as the new site because it meets the needs and standards for a preschool setting.

"People are entitled to their opinions, but we must make sure the facts are correct," she said.