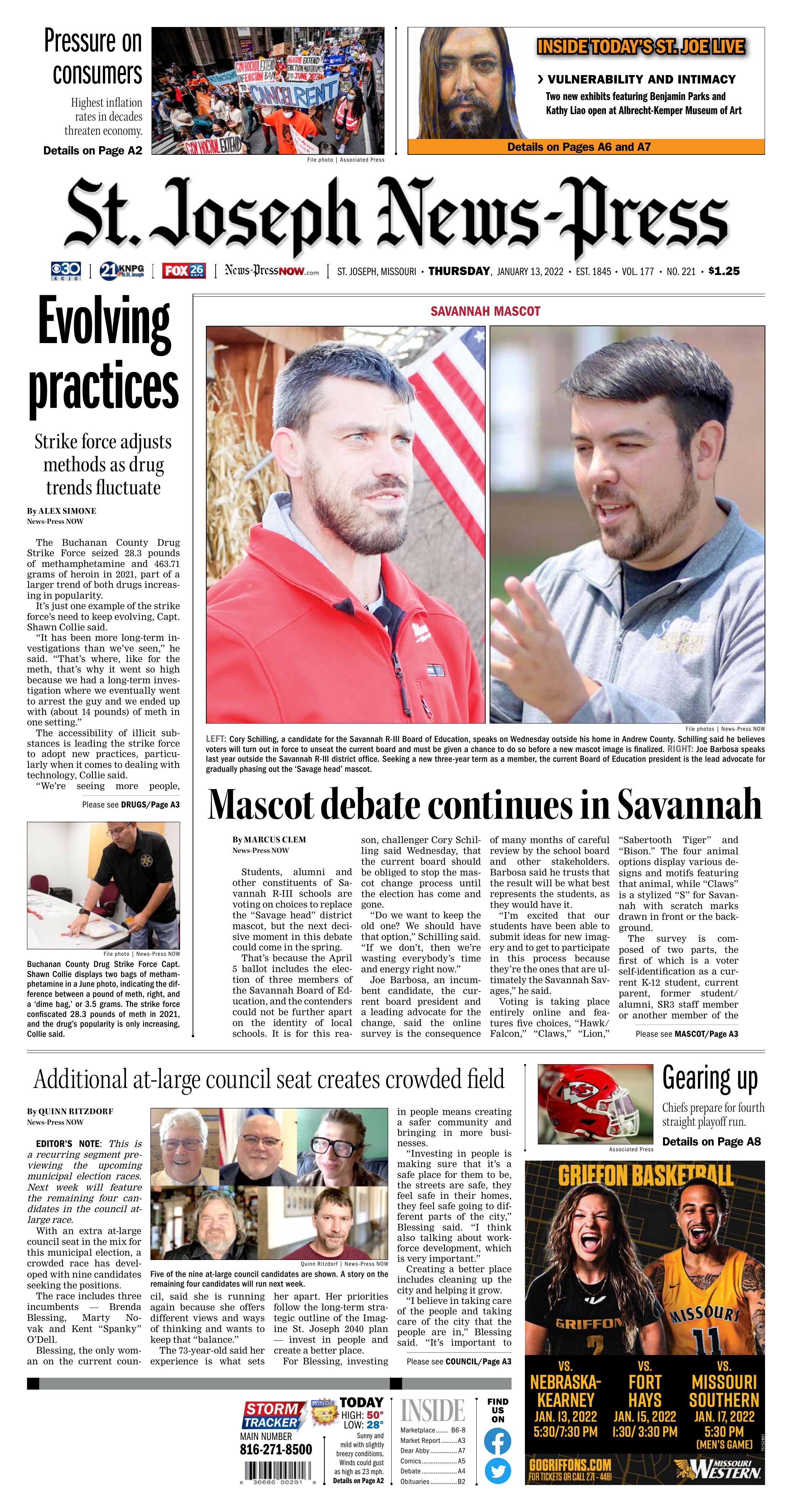 Buchanan County Drug Strike Force Capt. Shawn Collie displays two bags of methamphetamine in a June photo, indicating the difference between a pound of meth, right, and a ‘dime bag,’ or 3.5 grams. The strike force confiscated 28.3 pounds of meth in 2021, and the drug’s popularity is only increasing, Collie said.

The Buchanan County Drug Strike Force seized 28.3 pounds of methamphetamine and 463.71 grams of heroin in 2021, part of a larger trend of both drugs increasing in popularity.

The accessibility of illicit substances is leading the strike force to adopt new practices, particularly when it comes to dealing with technology, Collie said.

“We’re seeing more people, maybe, coming up with new drugs ... even from other continents,” he said. “They’re able to easily access those types of drugs, unfortunately. The other thing we were seeing, and more so maybe toward some of the bigger cities, was we were seeing trends where robberies or even homicides were up based on social media. People showing off money or drugs, basically letting other criminals know.”

Fighting those factors hinges on educating the community, particularly younger residents. They need to be taught not to trust social media when it comes to experimenting with drugs or posting about personal details since someone on the other end can be taking advantage, Collie said.

The strike force also took in 5,518 pills worth of controlled substances, with many often being laced with fentanyl.

The strike force does not have a category specific to the amount of fentanyl confiscated but that might have to change soon, Collie said.

“We’re seeing so many overdoses related specifically to fentanyl that we’re probably going to have to adjust our stats to start tracking fentanyl, or other drugs that are laced with fentanyl, to try to come up with that,” he said.

Of the pills taken in during 2021, more than half were believed to contain fentanyl, Collie said.

Dealing with meth, heroin and fentanyl also necessitate a change in strategy because their effects on behavior can be extreme and dangerous, Collie said.

“The arrest warrants, the search warrants, everything we do we kind of have to adapt it to a new type of culture and a new type of drug that we’re dealing with,” he said. “Not only for officer safety but for community safety and the safety of the suspect.”

There also is increased emphasis on being more than mere enforcers. It’s important for the strike force to work with the community and addiction service centers to assist with addicts’ recovery efforts, Collie said.

The ‘Bison,’ ‘Lion,’ ‘Claws,’ ‘Sabertooth Tiger’ and ‘Hawk/Falcon’ options are seen in this graphic overlay of the ‘Savage head’ mascot, which is set for phase-out as Savannah’s school mascot.

Joe Barbosa speaks last year outside the Savannah R-III district office. Seeking a new three-year term as a member, the current Board of Education president is the lead advocate for gradually phasing out the ‘Savage head’ mascot.

LEFT: Cory Schilling, a candidate for the Savannah R-III Board of Education, speaks on Wednesday outside his home in Andrew County. Schilling said he believes voters will turn out in force to unseat the current board and must be given a chance to do so before a new mascot image is finalized. RIGHT: Joe Barbosa speaks last year outside the Savannah R-III district office. Seeking a new three-year term as a member, the current Board of Education president is the lead advocate for gradually phasing out the ‘Savage head’ mascot.

Students, alumni and other constituents of Savannah R-III schools are voting on choices to replace the “Savage head” district mascot, but the next decisive moment in this debate could come in the spring.

That’s because the April 5 ballot includes the election of three members of the Savannah Board of Education, and the contenders could not be further apart on the identity of local schools. It is for this reason, challenger Cory Schilling said Wednesday, that the current board should be obliged to stop the mascot change process until the election has come and gone.

“Do we want to keep the old one? We should have that option,” Schilling said. “If we don’t, then we’re wasting everybody’s time and energy right now.”

Joe Barbosa, an incumbent candidate, the current board president and a leading advocate for the change, said the online survey is the consequence of many months of careful review by the school board and other stakeholders. Barbosa said he trusts that the result will be what best represents the students, as they would have it.

“I’m excited that our students have been able to submit ideas for new imagery and to get to participate in this process because they’re the ones that are ultimately the Savannah Savages,” he said.

Voting is taking place entirely online and features five choices, “Hawk/Falcon,” “Claws,” “Lion,” “Sabertooth Tiger” and “Bison.” The four animal options display various designs and motifs featuring that animal, while “Claws” is a stylized “S” for Savannah with scratch marks drawn in front or the background.

The survey is composed of two parts, the first of which is a voter self-identification as a current K-12 student, current parent, former student/alumni, SR3 staff member or another member of the community. There is no credential or password required to participate. The second prompts a selection from the five choices, with example images and descriptive text.

Schilling said the survey contains no option for people to indicate if they prefer the old mascot or to write in a message of support for it.

Barbosa explained that in his view, the debate already has evolved beyond the old image. No effort, he said, will be made to “whitewash history,” and alumni gifts, trophies, icons and other such installations on district property will remain in place.

Yet, there’s no going back on delisting the “Savage head” from official recognition.

“The board felt that the name ‘Savannah Savages’ was very much tied to the community’s identity and our schools,” Barbosa said. “We also felt that the imagery associated with that name has changed and evolved since the 1920s. Personally, I see this as the next chapter of the evolution.”

Five of the nine at-large council candidates are shown. A story on the remaining four candidates will run next week.

EDITOR’S NOTE: This is a recurring segment previewing the upcoming municipal election races. Next week will feature the remaining four candidates in the council at-large race.

With an extra at-large council seat in the mix for this municipal election, a crowded race has developed with nine candidates seeking the positions.

Blessing, the only woman on the current council, said she is running again because she offers different views and ways of thinking and wants to keep that “balance.”

The 73-year-old said her experience is what sets her apart. Her priorities follow the long-term strategic outline of the Imagine St. Joseph 2040 plan — invest in people and create a better place.

For Blessing, investing in people means creating a safer community and bringing in more businesses.

“Investing in people is making sure that it’s a safe place for them to be, the streets are safe, they feel safe in their homes, they feel safe going to different parts of the city,” Blessing said. “I think also talking about workforce development, which is very important.”

Creating a better place includes cleaning up the city and helping it grow.

Of all the incumbents running for reelection, O’Dell, 65, has the most experience. After two terms as a councilman, he said there is still more to be done.

During his eight years, he is most proud of improving the city’s streets through a use tax that brought in $10 million last year. His top priority for the upcoming election is building sidewalks near local schools.

“We need to make sure we get some sidewalks around Pershing and Pickett and Spring Garden,” O’Dell said. “All these schools are in desperate need of some kind of safe passage for these kids.”

O’Dell said the second installment of American Rescue Plan Act funds and money freed up in the budget from the parks tax could be used for the sidewalks. He said his institutional knowledge of the budget is what sets him apart from other candidates and why citizens should be wary of changing the entire council.

“The worst thing that this town can do is to go with a clean face and not reelect somebody or a few faces back, because it would be like starting from scratch and that’s the worst thing we can do,” O’Dell said.

The last incumbent in the at-large race is the current District 2 representative. Novak, 66, decided to run at-large when the districts were changed and he lost about 80% of his area.

But representing a district helped Novak build a constituency base and understand the problems in St. Joseph. He said that’s what sets him apart from other candidates.

His top priorities are public safety and infrastructure, specifically making sure the police and fire departments receive the salary increases that are promised to them to help with staffing.

Those salary increases, which were partially implemented at the beginning of the year, will force the new council to make budget cuts — a top priority for at-large candidate Carl Jennings.

“There’s no certain aspect, I want to make our city a better place,” Jennings said. “I’d like to take our budget or the monies we have and use them in an economical manner.”

Jennings, 51, is a union electrician for Action Electric and is a member of the Downtown Association. He is running to represent and be a voice for the blue-collar workers in town.

Andy Montee, the owner of Mokaska, also said he would bring a different perspective to the council, as he is the youngest candidate in any of the municipal races at the age of 33.

“I think there is a lot of value in our youth in St. Joe and young people who are professionals,” Montee said. “There could be more done to both attract them and also keep them here.”

Montee has spent the last 10 years teaching and wants to enhance the city’s education policies and increase LGBTQ and racial representation by expanding workplace and housing protections. While this partially involves the school district, Montee believes there is overlap and he can have influence while on the council.

He also mentioned the Interstate 229 double-decker bridge. While he doesn’t have a position on what should be done yet, he said there should be better communication.

“I think a lot of people have felt left out of that discussion and have not had an adequate way to have their voices heard, especially given just the difficulty with meeting in person for the last couple of years,” Montee said. “A lot of the people kind of have been a little upset that a lot of this stuff kind of happened without their input. That’s something I’d like to change.”

The at-large council race will hold primaries on Feb. 8 and the general election is April 5.