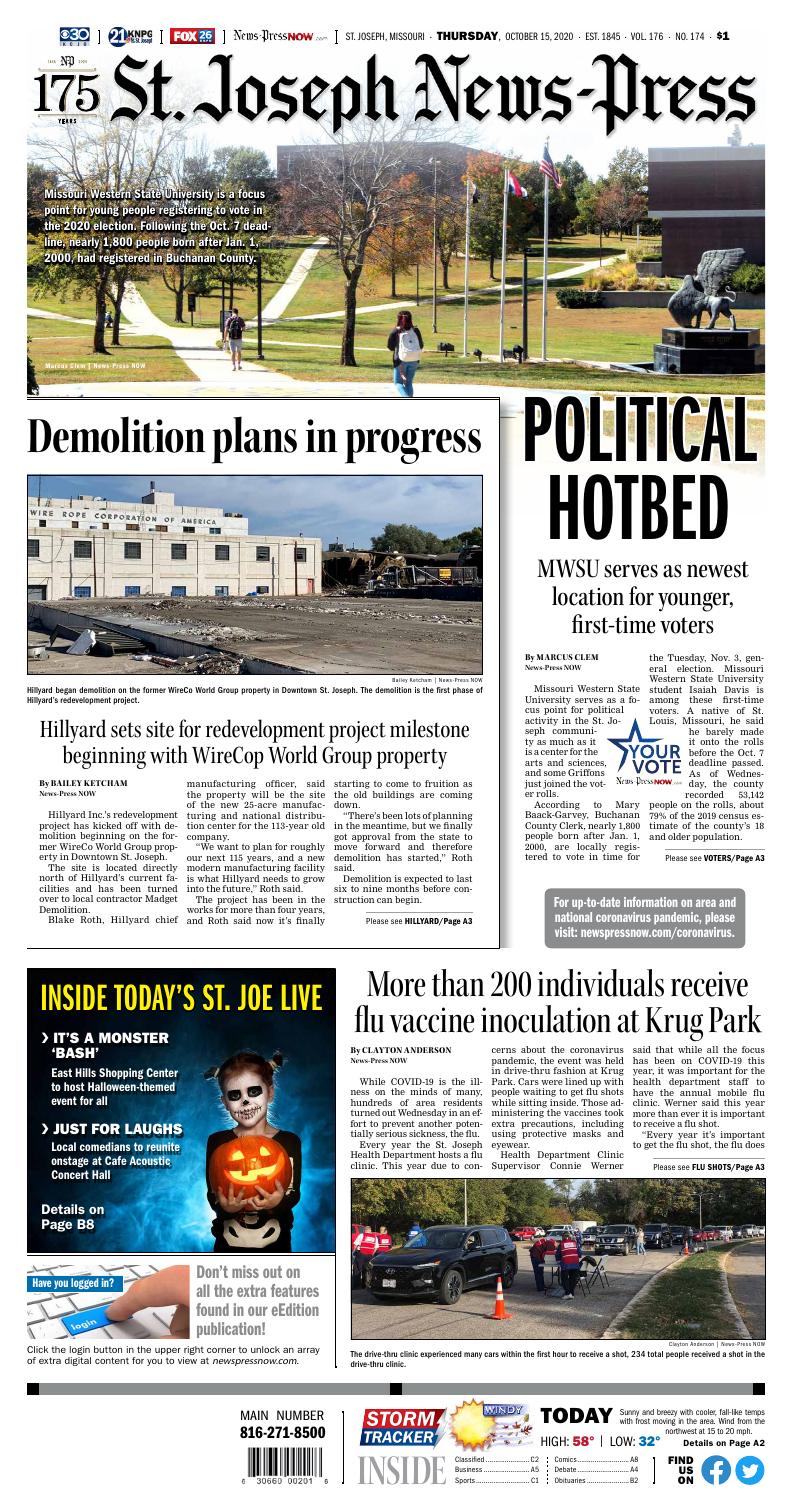 The site is located directly north of Hillyard’s current facilities and has been turned over to local contractor Madget Demolition.

Blake Roth, Hillyard chief manufacturing officer, said the property will be the site of the new 25-acre manufacturing and national distribution center for the 113-year old company.

“We want to plan for roughly our next 115 years, and a new modern manufacturing facility is what Hillyard needs to grow into the future,” Roth said.

The project has been in the works for more than four years, and Roth said now it’s finally starting to come to fruition as the old buildings are coming down.

“There’s been lots of planning in the meantime, but we finally got approval from the state to move forward and therefore demolition has started,” Roth said.

Demolition is expected to last six to nine months before construction can begin.

“From there, the first building that will go up will more than likely be our new distribution center and after that we’ll determine what our manufacturing needs are,” Roth said.

Brett Carolus, Hillyard’s chief administration officer, said the company is excited to be moving forward with the project.

“Like Hillyard, WireCo has been a fixture in the Downtown community for generations and we understand the demolition may be bittersweet for some,” Carolus said. “Our goal is to be good stewards of the property as we continue to provide opportunities for growth and reinvestment in the Downtown area.”

Roth said it’s a huge plus being able to have its new facility adjacent to current operations and it’ll have an increase in technology.

“They’ll be increased automation throughout our project both in distribution and manufacturing,” Roth said.

The public is encouraged to stay away from the area as it will be an active demolition site.

While COVID-19 is the illness on the minds of many, hundreds of area residents turned out Wednesday in an effort to prevent another potentially serious sickness, the flu.

Every year the St. Joseph Health Department hosts a flu clinic. This year due to concerns about the coronavirus pandemic, the event was held in drive-thru fashion at Krug Park. Cars were lined up with people waiting to get flu shots while sitting inside. Those administering the vaccines took extra precautions, including using protective masks and eyewear.

Health Department Clinic Supervisor Connie Werner said that while all the focus has been on COVID-19 this year, it was important for the health department staff to have the annual mobile flu clinic. Werner said this year more than ever it is important to receive a flu shot.

“Every year it’s important to get the flu shot, the flu does cause a lot of damage each year, but because we have no way to differentiate the symptoms of COVID from the flu this is so much more important to be able to have any protection we can to try to keep you as healthy as you can,” Werner said.

“We are doing our best to be able to fulfill the need of the community while keeping those same safety measures in place,” Werner said.

Teddy Carpenter, who showed up to the drive-thru flu shot clinic Wednesday, said this was the first year he had ever made it a point to get a flu shot. Carpenter said he felt it was necessary to do so in order to protect his family.

“I have a kid coming in November as the first one, and I’m trying to do things to be extra cautious, which people need to do today,” Carpenter said.

Health department officials wanted to stress that those who were unable to make it to the drive-thru flu clinic should seek out flu vaccinations at any of the many pharmacies and health-care providers that are providing them.

East Hills Shopping Center to host Halloween-themed event for all

MWSU student Arden Beard has yet to decide who to vote for in the Nov. 3 elections, but she recently took advantage of a Snapchat registration drive which directs new voters to the Missouri Secretary of State’s website.

MWSU student Isaiah Davis thought he was registered to vote in St. Louis, Missouri, his home town. When the Oct. 7 deadline drew near, he checked and found out this was not the case, and decided to re-register locally.

Missouri Western State University is a focus point for young people registering to vote in the 2020 election. Following the Oct. 7 deadline, nearly 1,800 people born after Jan. 1, 2000, had registered in Buchanan County.

Isaiah Colbert has been helping to register voters among students of Missouri Western State University as part of an initiative of his Sigma Kappa chapter of the Alpha Phi Alpha fraternity.

Missouri Western State University serves as a focus point for political activity in the St. Joseph community as much as it is a center for the arts and sciences, and some Griffons just joined the voter rolls.

According to Mary Baack-Garvey, Buchanan County Clerk, nearly 1,800 people born after Jan. 1, 2000, are locally registered to vote in time for the Tuesday, Nov. 3, general election. Missouri Western State University student Isaiah Davis is among these first-time voters. A native of St. Louis, Missouri, he said he barely made it onto the rolls before the Oct. 7 deadline passed. As of Wednesday, the county recorded 53,142 people on the rolls, about 79% of the 2019 census estimate of the county’s 18 and older population.

“So, always double check, make sure that you know you’re a registered voter, and where you are,” Davis said.

He had thought he was registered to vote back home, but he checked his status earlier this month and saw this was not so. As he’s living in St. Joseph during the time he’s studying business and playing football at Missouri Western, it made sense to get registered in Buchanan County.

Davis said he often hears that voting won’t make a difference. But the revival of the Civil Rights Movement that has arisen nationwide in 2020 leaves him convinced that young Black adults like himself must vote to see government leaders take the concerns of his community seriously. He urges patience and solidarity among his peers.

“Your voice will be heard,” he said. “You probably think ‘Aw, my vote don’t matter.’ But it does.”

Isaiah Colbert has been registered to vote for several years in Kansas City, Missouri, and intends to drive back home before the polls close to do his civic duty. But he’s been working on campus with his Sigma Kappa/Missouri Western chapter of Alpha Phi Alpha, the nation’s oldest historically Black fraternity.

“Everybody has a voice, believe it or not, and ... you know, your vote counts,” Colbert said. “So we all need to get out and vote, as a people.”

Like Davis, Colbert affirms the importance of increasing minority voter turnout so as to address via policy reform the disadvantages many Black voters unfairly experience, as Colbert described it. However, within the context of voting, he affirms Missouri Western’s tradition as an open-access campus. Just as MWSU attempts to admit and graduate as many people as possible, regardless of criteria like test scores, Colbert said he believes that democracy only works if as many people as possible vote, despite disagreements.

MWSU sophomore Arden Beard hasn’t decided how she’ll vote yet. But, she said, the opportunity can’t be passed up. 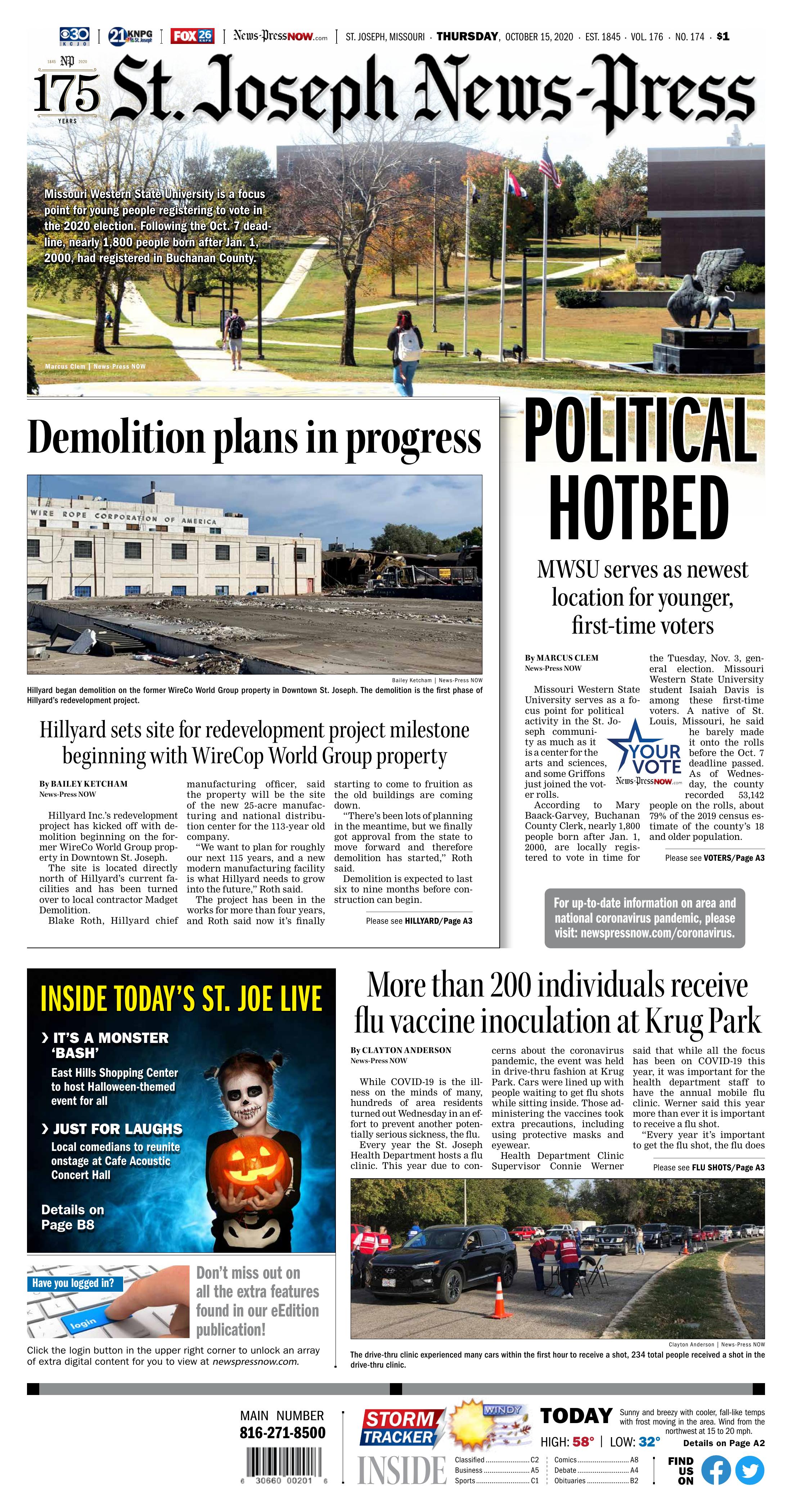