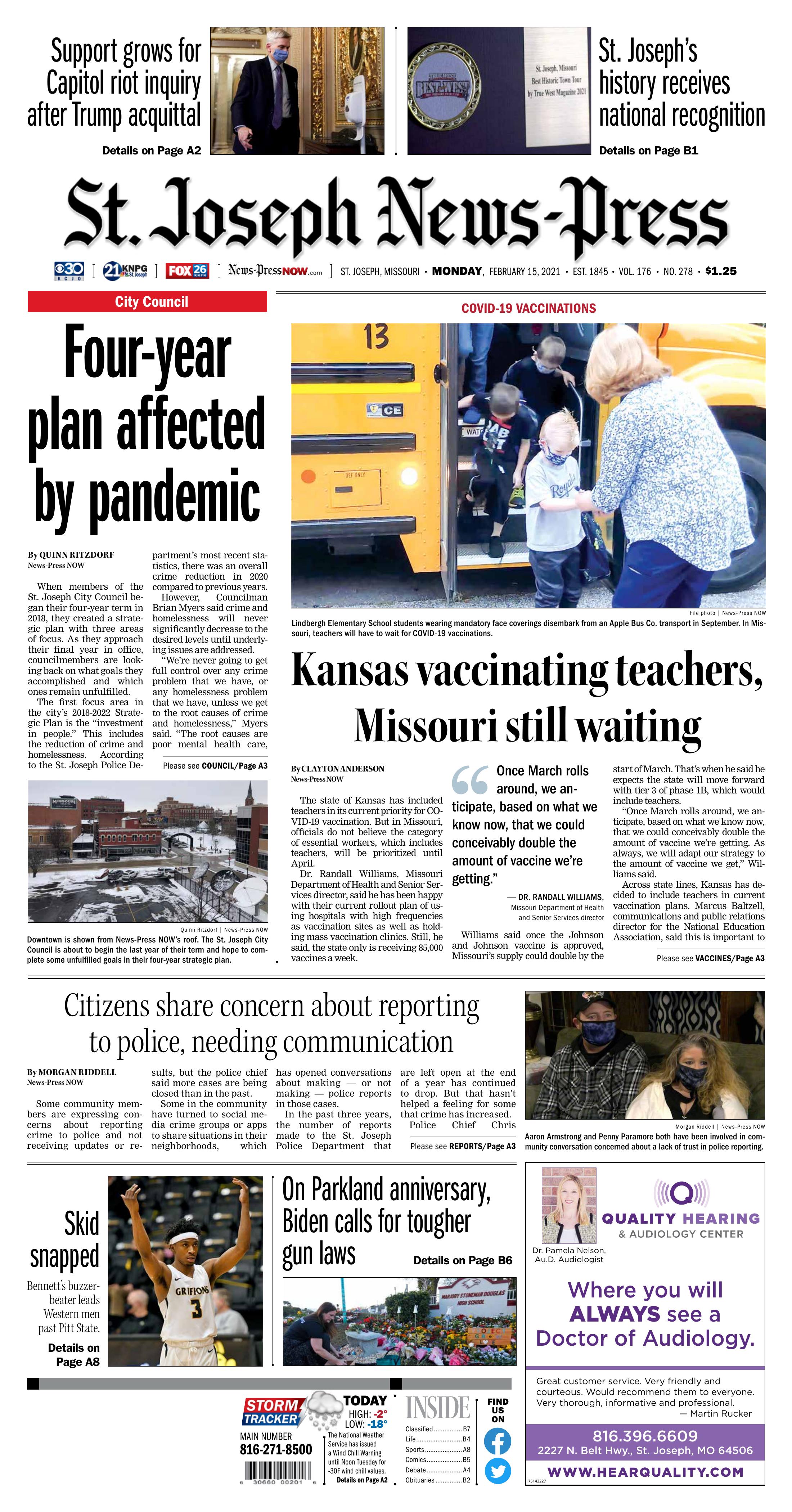 The state of Kansas has included teachers in its current priority for COVID-19 vaccination. But in Missouri, officials do not believe the category of essential workers, which includes teachers, will be prioritized until April.

Dr. Randall Williams, Missouri Department of Health and Senior Services director, said he has been happy with their current rollout plan of using hospitals with high frequencies as vaccination sites as well as holding mass vaccination clinics. Still, he said, the state only is receiving 85,000 vaccines a week.

Williams said once the Johnson and Johnson vaccine is approved, Missouri’s supply could double by the start of March. That’s when he said he expects the state will move forward with tier 3 of phase 1B, which would include teachers.

Across state lines, Kansas has decided to include teachers in current vaccination plans. Marcus Baltzell, communications and public relations director for the National Education Association, said this is important to ensuring kids get back in the classroom and is done safely throughout the state.

“One thing we all have in common is this: we have two big goals that all educators share. Number one is getting back with their students, and number two is staying safe while we do it. And that’s, that’s the big goal,” Baltzell said.

Baltzell said he understands the system is not perfect when distributing vaccines, but he does believe it is important for teachers to be in the line and start receiving shots in arms.

“It hasn’t been perfect and the reason we’re hearing a lot of that is because of something we’ve said all along, and that is that it’s very difficult to locally control a global pandemic,” Baltzell said. “When you give those resources out to communities and then you leave it in strictly ... this kind of open book of how to do anything, then people make different decisions. “

For the St. Joseph School District, the time for all teachers to get vaccinated will have to wait. But Maria Burnham, district health coordinator, said 30% of the district’s staff fall into the current tier in Missouri and she is encouraging them to get vaccinated.

In a survey done by the district, about 60% of the staff said they would take the vaccine, Burnham said.

Aaron Armstrong and Penny Paramore both have been involved in community conversation concerned about a lack of trust in police reporting.

Some community members are expressing concerns about reporting crime to police and not receiving updates or results, but the police chief said more cases are being closed than in the past.

Some in the community have turned to social media crime groups or apps to share situations in their neighborhoods, which has opened conversations about making — or not making — police reports in those cases.

In the past three years, the number of reports made to the St. Joseph Police Department that are left open at the end of a year has continued to drop. But that hasn’t helped a feeling for some that crime has increased.

Police Chief Chris Connally said a reason why people may have a perception of crime on the rise is that the system the St. Joseph Police Department used for tracking reporting changed in 2018.

The new system allows multiple crimes per incident to be tracked. For example, the old system would categorize a statistic for a rape and homicide as a homicide only.

Beyond what looked like an uptick in incidents, Connally said a lack of reporting is far from a local issue.

“National Crime Victimization Surveys ... provide a detailed picture of crime incidents from a victim’s perspective. It is another index of crime but not an accurate measure. Traditionally, depending on the type of crime, the disparity is about 50%. NCVS is a survey sample,” Connally said.

According to the U.S. department of Justice, in 2018 64% of property crimes in the United States went unreported to police, and 55% of personal crimes went unreported. Some citizens have shared that a lack of contact after a report is made has hurt their trust in reporting.

Aaron Armstrong, a St. Joseph resident, started a social media conversation and it blew up with people sharing their experiences.

“They haven’t got no call backs stating where their case is at ... and I don’t want to say that’s every case, but my understanding from a lot of residents in town is that it’s happening all too often where they’re not getting a call back,” Armstrong said.

But Armstrong is not blaming officers or detectives, rather a lack of manpower and communication between the community and law enforcement.

Penny Paramore is another concerned citizen who said she felt like police took too long to respond to an incident where she found a door to her home open. Other instances concern her as well.

“My sister has her car sitting out front. There’s been two or three times her car has been ransacked. I asked ‘Did you call the cops?’ She looked at me and said ‘Why?’ They’re not going to do nothing.”

But police said it is important to report all crimes to give an accurate reflection of what is going on. Some of the most common incidents shared among local social media users are car and home thefts. According to the St. Joseph Police Department’s end of 2020 Crime Statistics, theft and motor vehicle theft reports were down in 2020.

“These residents are fed up already, there’s residents refusing to file reports about anything else that’s happened to their property,” Armstrong said. “Let’s start laying the footwork. Let’s get together, start setting up to work together. And work on something that will work.”

Downtown is shown from News-Press NOW’s roof. The St. Joseph City Council is about to begin the last year of their term and hope to complete some unfulfilled goals in their four-year strategic plan.

When members of the St. Joseph City Council began their four-year term in 2018, they created a strategic plan with three areas of focus. As they approach their final year in office, councilmembers are looking back on what goals they accomplished and which ones remain unfulfilled.

The first focus area in the city’s 2018-2022 Strategic Plan is the “investment in people.” This includes the reduction of crime and homelessness. According to the St. Joseph Police Department’s most recent statistics, there was an overall crime reduction in 2020 compared to previous years.

However, Councilman Brian Myers said crime and homelessness will never significantly decrease to the desired levels until underlying issues are addressed.

St. Joseph Mayor Bill McMurray said there seem to be more people who are homelessness in town, but there also has been an increase in resources.

The second focus area is to “create a better place” by advancing riverfront development, community enhancements, the park system and Downtown.

The city has started on riverfront development, including a hike and bike trail along the bluff and a nearby RV park. Discussions surrounding park improvements, specifically at Krug Park, have also taken place.

Myers said the city has taken steps to enhance the town’s image through a vacant property registry, rental inspections and addressing dilapidated commercial and residential structures through the city’s Land Bank.

“We want to make this community look as appealing as possible, so other people from the outside will look at it as an attractive investment place that they’d want to move their family,” Myers said. “If we improve the overall appearance for our own citizens, it will make us more likely to invest in ourselves. I think that goes a long way.”

As for Downtown, Councilman Kent O’Dell said it used to be a “ghost town” but has improved in recent years.

“It’s evolved in just a matter of six, seven years to where a lot of the buildings are no longer sitting there not doing anything,” O’Dell said. “The bad part of course is the pandemic — that set everybody back quite a bit, trying to keep the small businesses open.”

In the past year, the council hasn’t been able to focus on some goals because their time, energy and budget were dedicated to surviving the pandemic.

“We had so many other things breathing down our throat with mask mandates, the numbers and the deaths and the sicknesses and the ICUs in the hospital, we weren’t able to focus like we normally do,” O’Dell said. “But hopefully, starting within the next month, when we’re going to actually start having meetings again in person, we can kind of finish up with a bang with some of these (projects).”

No focus area in the strategic plan suffered more during the pandemic than the goal to grow prosperity through economic development.

“The Chamber (of Commerce) has always done a good job at giving us prospects for individuals and companies to move into the city,” Myers said. “I think the focus of the chamber throughout the pandemic has had to shift. Instead of just focusing on economic attraction, they’ve had to look at economic retention.”

In April, the current council will begin the last year of their term. Many hope they can move on from the pandemic and begin to focus back on the goals that have gone unfulfilled.

“I don’t blame everything on the pandemic,” O’Dell said. “That last year we’ve had, that’s a bell ringer and it put us back on our heels. I think we’re finally coming back onto the balls of our feet and starting to see the light and starting to move forward.”