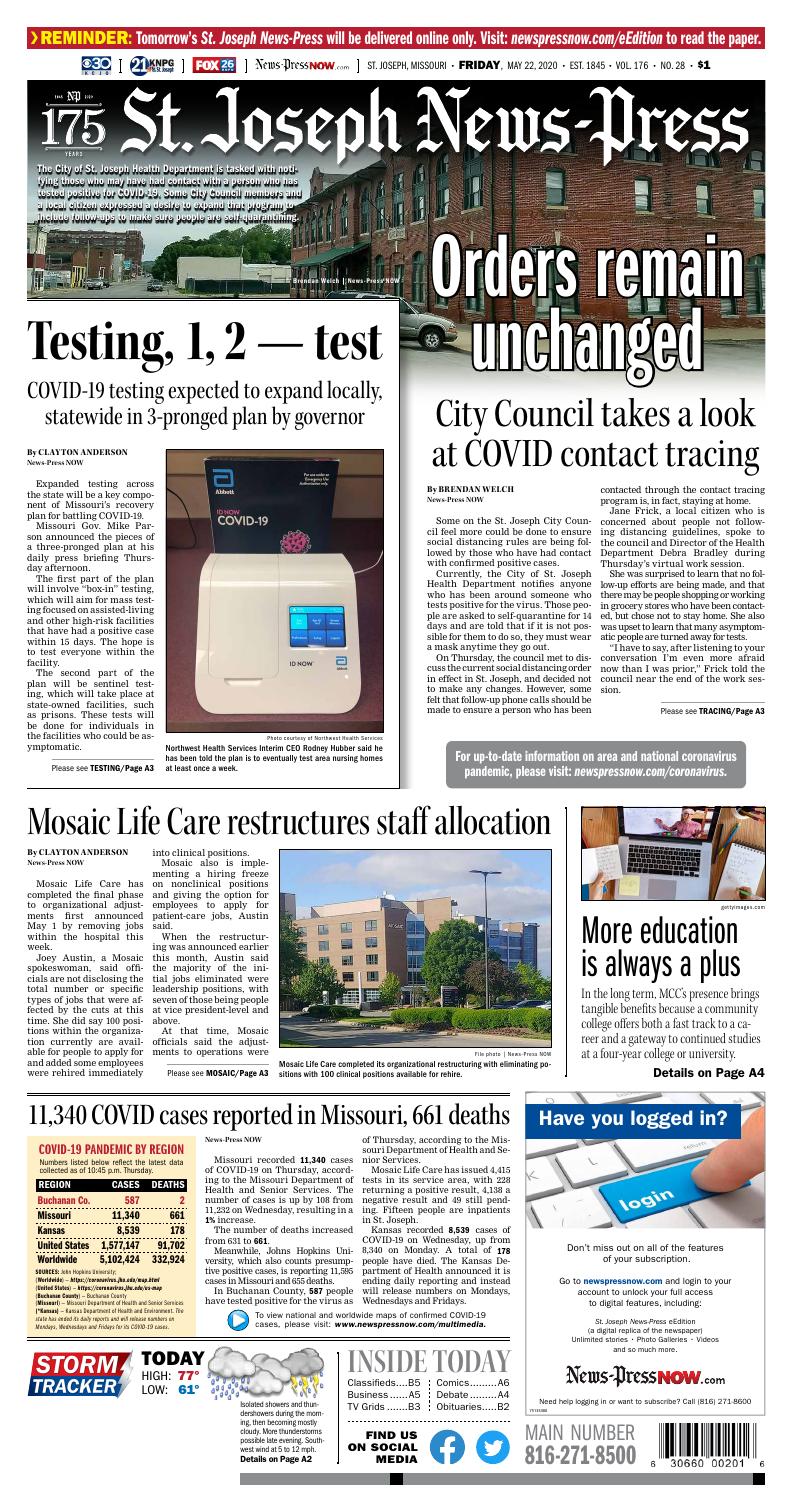 Some on the St. Joseph City Council feel more could be done to ensure social distancing rules are being followed by those who have had contact with confirmed positive cases.

Currently, the City of St. Joseph Health Department notifies anyone who has been around someone who tests positive for the virus. Those people are told to self-quarantine for 14 days. If a person is an employee of an essential business and does not have symptoms, they are allowed to go to work if they wear personal protective equipment and if their employer wants them to return. They are told not to go anywhere besides work and home.

On Thursday, the council met to discuss the current social distancing order in effect in St. Joseph, and decided not to make any changes. However, some felt that follow-up phone calls should be made to ensure a person who has been contacted through the contact tracing program is, in fact, staying at home.

Jane Frick, a local citizen who is concerned about people not following distancing guidelines, spoke to the council and Director of the Health Department Debra Bradley during Thursday’s virtual work session.

She was surprised to learn that no follow-up efforts are being made, and that there may be people shopping or working in grocery stores who have been contacted, but chose not to stay home. She also was upset to learn that many asymptomatic people are turned away for tests.

“I have to say, after listening to your conversation I’m even more afraid now than I was prior,” Frick told the council near the end of the work session.

She said she hopes to see tracing follow-ups become a norm, and wants to see aggressive testing done in St. Joseph.

Mayor Bill McMurray said another community testing event, similar to the one that was done last weekend, is being worked on. It will use the remaining 400 tests that were not used last time.

McMurray said the Health Department’s contact tracing process is in compliance with Centers for Disease Control and Prevention guidelines and extra effort would require extra funds. He is planning to speak with the Buchanan County Commission about possible funding, which recently received $10 million in COVID-19 relief to be used in the county.

“We’re following the CDC guidelines currently,” McMurray told News-Press NOW. “We can always do more than the guidelines require. I know the county has received a big number of $10 million and I’ll see if we can spend some of that money on augmenting our follow-ups.”

Municipal fines are a possibility if the local prosecutor is called in to deal with noncompliance of any part of the current order, but Kovac said that process likely will take too long to be of major effect.

“If you’re going to start using the prosecutor, that’s going to be a long, slow process,” Kovac said. “I don’t know if you have tried going through the court system, but there’s nothing fast about it.”

“This is a matter of personal responsibility,” McMurray said. “We all have a stake in this. we’re all in this together.”

He said the continued number of positive cases is concerning, but the number of people in the hospital is what he is keeping an eye on, and that number has stayed relatively steady.

A report given by the Health Department on Thursday showed that there are currently 15 people in Buchanan County hospitalized by the virus. Of those, eight are in the ICU, four of which are on bipap (nasal oxygen) and four are on ventilators.

McMurray said that if hospitalizations get above 20 or nearing 30, he may make the call to bring tighter restrictions back into effect.

Northwest Health Services Interim CEO Rodney Hummer said he has been told the plan is to eventually test area nursing homes at least once a week.

Expanded testing across the state will be a key component of Missouri’s recovery plan for battling COVID-19.

The first part of the plan will involve “box-in” testing, which will aim for mass testing focused on assisted-living and other high-risk facilities that have had a positive case within 15 days. The hope is to test everyone within the facility.

The second part of the plan will be sentinel testing, which will take place at state-owned facilities, such as prisons. These tests will be done for individuals in the facilities who could be asymptomatic.

The final part of the plan is community sampling, which will be done statewide in different counties and allow anyone to be tested. Five hundred tests are scheduled to be performed in Andrew County on Friday as part of this plan, in collaboration with Mosaic Medical Center-Maryville and Northwest Health Services.

The goal is to build up to 7,500 coronavirus tests per day statewide. Parson said everyone at nursing homes and other long-term care facilities will be tested, with a goal of 1,850 tests at those locations per day. Another 1,440 tests per day are planned at prisons, mental health facilities and other state-run housing.

Hummer said he has been told nursing homes and long-term care facilities could be tested weekly at some point.

“Some guidance on that has come out, and I know it’s changed multiple times, the most recent is that they would potentially like them (nursing homes), tested every week,” Hummer said.

According to the St. Joseph Health Department’s daily briefing, the lowest number of positive cases in Buchanan County involved those 80 and older. However, in the state of Missouri, the 80-plus group is the highest age category for positive cases, according to the Department of Health and Senior Services with 1,316 cases out of 11,340 total.

Hummer, who worked in nursing homes for 11 years, said he has had conversations with local administrators of such facilities, and he believes the low numbers among elderly residents here are due to proactive steps taken early by the residential facilities.

Dr. Randall Williams, director of the Missouri Department of Health and Senior Services, said at the governor’s briefing Thursday that the process to test those in nursing homes will be done on an ongoing basis as part of the plan.

contributed to this story.

Mosaic Life Care has completed the final phase to organizational adjustments first announced May 1 by removing jobs within the hospital this week.

Joey Austin, a Mosaic spokeswoman, said officials are not disclosing the total number or specific types of jobs that were affected by the cuts at this time. She did say 100 positions within the organization currently are available for people to apply for and added some employees were rehired immediately into clinical positions.

Mosaic also is implementing a hiring freeze on nonclinical positions and giving the option for employees to apply for patient-care jobs, Austin said.

When the restructuring was announced earlier this month, Austin said the majority of the initial jobs eliminated were leadership positions, with seven of those being people at vice president-level and above.

At that time, Mosaic officials said the adjustments to operations were to combat financial challenges from the COVID-19 pandemic.

In addition to the job eliminations, all officers, physicians, vice presidents and directors incurred a percentage salary decrease that began in March, Mosaic officials said.

Missouri recorded 11,340 cases of COVID-19 on Thursday, according to the Missouri Department of Health and Senior Services. The number of cases is up by 108 from 11,232 on Wednesday, resulting in a 1% increase.

In Buchanan County, 587 people have tested positive for the virus as of Thursday, according to the Missouri Department of Health and Senior Services.

Mosaic Life Care has issued 4,415 tests in its service area, with 228 returning a positive result, 4,138 a negative result and 49 still pending. Fifteen people are inpatients in St. Joseph.

Kansas recorded 8,539 cases of COVID-19 on Wednesday, up from 8,340 on Monday. A total of 178 people have died. The Kansas Department of Health announced it is ending daily reporting and instead will release numbers on Mondays, Wednesdays and Fridays. 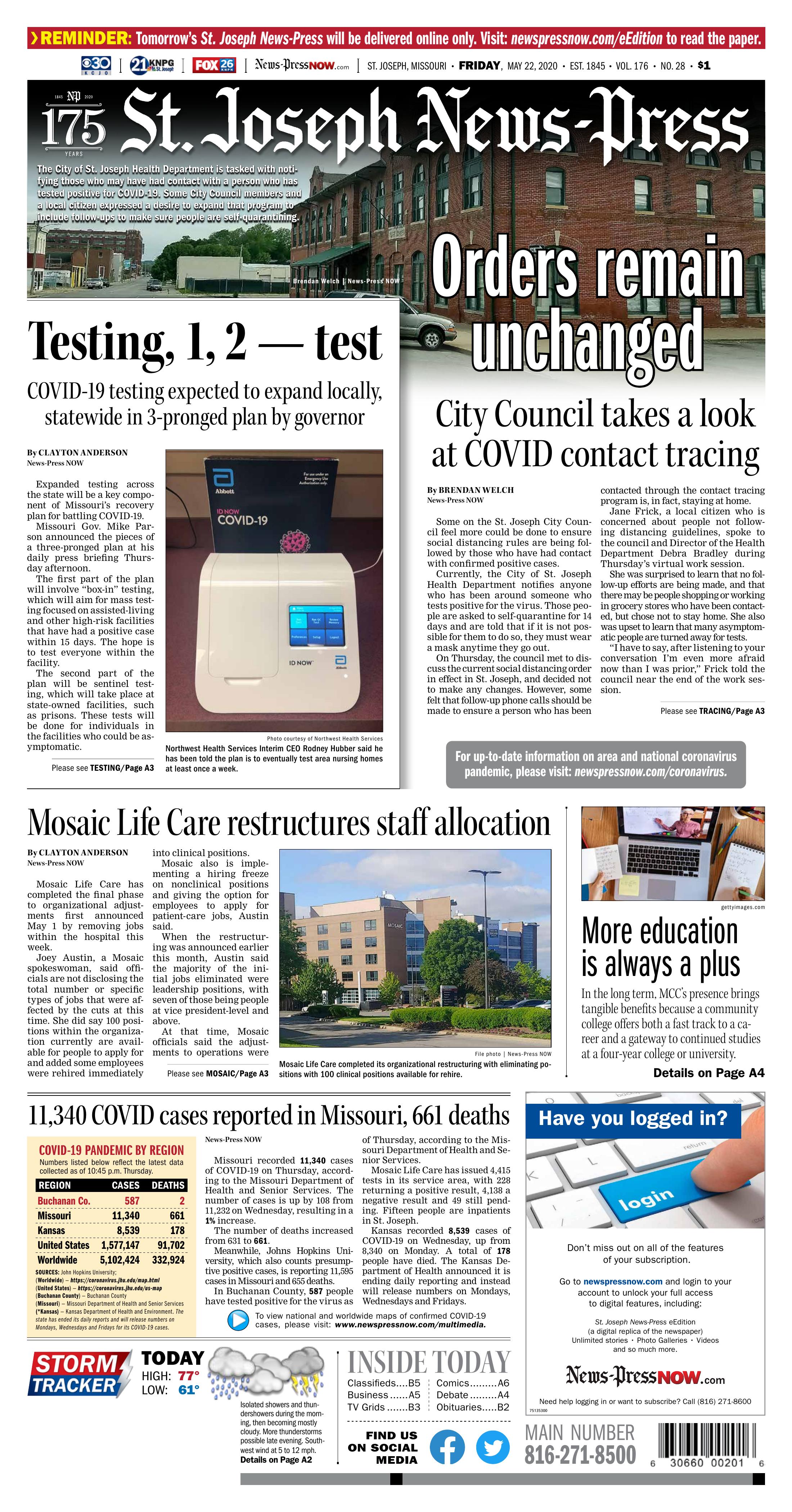