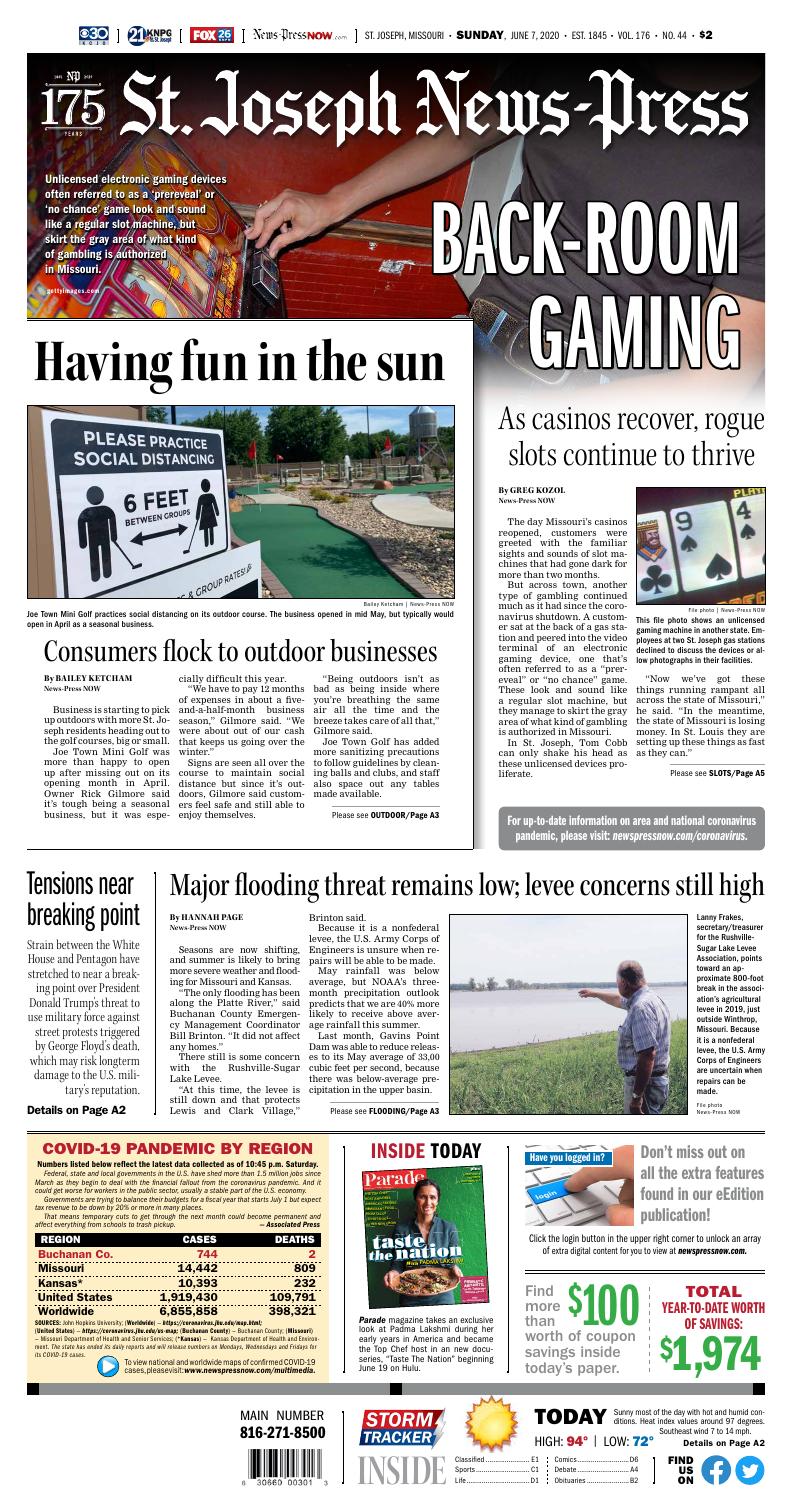 This file photo shows an unlicensed gaming machine in another state. Employees at two St. Joseph gas stations declined to discuss the devices or allow photographs in their facilities.

The day Missouri’s casinos reopened, customers were greeted with the familiar sights and sounds of slot machines that had gone dark for more than two months.

But across town, another type of gambling continued much as it had since the coronavirus shutdown. A customer sat at the back of a gas station and peered into the video terminal of an electronic gaming device, one that’s often referred to as a “prereveal” or “no chance” game. These look and sound like a regular slot machine, but they manage to skirt the gray area of what kind of gambling is authorized in Missouri.

In St. Joseph, Tom Cobb can only shake his head as these unlicensed devices proliferate.

In St. Joseph, too. The unregulated machines were found in at least two convenience stores on the South Belt Highway.

Cobb, owner and president of ACME Music & Vending in St. Joseph, said it’s common for his employees to report seeing these electronic devices when stopping in some gas stations to get snacks. There are an estimated 14,000 of the devices statewide, tucked into convenience stores, truck stops and fraternal organizations.

It creates another problem for Cobb’s business, which already faces the headwinds of an economic downturn. His company, a supplier of pool, darts, pinball and other legal games, finds itself losing market share to these rogue machines.

“It’s very, very depressing to try to run a legitimate business,” he said. “There are only so many discretionary dollars to go around.”

It’s a problem that isn’t isolated to Cobb’s business.

Missouri’s casinos and the state lottery both lose out. State lottery officials, in testimony in Jefferson City, estimate that unlicensed gambling siphoned off about $50 million.

That’s money that Missouri isn’t able to tax at a time when schools face painful cuts in state aid. With unlicensed machines, most of the profits go to the device maker and the gas station that houses it.

Adding insult to injury, some of these rogue machines didn’t face the same 10-week coronavirus shutdown as Missouri’s 13 riverboat casinos. Missouri lost an estimated $1 million a day in casino tax revenue during the shutdown.

“Unlike casinos, illegal slot machines do not generate taxes to fund public education or other state programs,” Mike Winter, executive director of the Missouri Gaming Association, said in a statement on the trade group’s website. “We support legislation to eliminate illegal slot machines all together.”

The degree that these devices operate outside the law is a matter of debate. An executive director of the Missouri Gaming Commission, the regulatory authority for Missouri’s casinos, said they violate the law. But the commission may lack statutory authority to enforce that opinion. Device makers, including one whose lobbyist maintains close ties to Missouri Gov. Mike Parson, point to ambiguities and workarounds that allow the machines to operate.

The Gaming Commission is closely watching a court case involving the operator of a video poker machine in Platte County.

Conway guesses that a resolution could be folded into the broader question of whether casino gambling is limited to the two major rivers and where sports wagering will be allowed, once the legislature decides on that issue.

“So you’ve got the illegals, you’ve got sports wagering and you’ve got the casinos trying to operate,” Conway said. “It’s been a pretty complex last 90 days for the gaming industry in Missouri.”

This year, Missouri lawmakers debated competing proposals for unlicensed slot machines, one that would open the door to legalization and another that sought to make them illegal, plain and simple. The bill to ban the devices passed in the Senate but couldn’t make it out of a conference committee.

For Cobb, it was a depressing end to the legislative session. He’s hoping the issue can come up in a special session.

“I don’t know why when the lottery asks to expand, they scream about gambling being expanded. But they turn a blind eye to these illegal games all across the state,” he said.

Joe Town Mini Golf practices social distancing on its outdoor course. The business opened in mid May, but typically would open in April as a seasonal business.

Fairview Golf Course employee disinfects golf carts after they were used. Golf carts are limited to one per person unless the golfers live in the same household.

Business is starting to pick up outdoors with more St. Joseph residents heading out to the golf courses, big or small.

Joe Town Mini Golf was more than happy to open up after missing out on its opening month in April. Owner Rick Gilmore said it’s tough being a seasonal business, but it was especially difficult this year.

“We have to pay 12 months of expenses in about a five-and-a-half-month business season,” Gilmore said. “We were about out of our cash that keeps us going over the winter.”

Signs are seen all over the course to maintain social distance but since it’s outdoors, Gilmore said customers feel safe and still able to enjoy themselves.

“Being outdoors isn’t as bad as being inside where you’re breathing the same air all the time and the breeze takes care of all that,” Gilmore said.

Joe Town Golf has added more sanitizing precautions to follow guidelines by cleaning balls and clubs, and staff also space out any tables made available.

“It’s set up where you can have a group on each hole and easily be separated,” Gilmore said.

Another spot St. Joseph residents have taken advantage of since it has reopened is Fairview Golf Course. Chuck Kempf, St. Joseph director of parks, recreation and civic facilities, said tee times have been filling up quicker on the weekends than previous years.

“This year it’s different, we have solid tee times from 7 a.m. to about 4 p.m. with very little exception on the weekends,” Kempf said. “During the week it’s a little less busy because of people working.”

Some aspects at the course have changed, including the one person per cart rule. Family members can share a cart, but if individuals don’t live together they have to separate.

“That rule in itself is really altering the way we can play golf, because we can’t have any special events, tournaments or leagues because it requires people who don’t live together to be in the same cart,” Kempf said.

Kempf hopes in the future the restrictions will be modified to allow people who want to ride together to do so.

The course is also encouraging golfers to play touchless golf. There are no trash cans or ball washers on the course to eliminate items commonly touched.

”The pins and the flags are in the holes, but we are asking that people not touch the flags,” Kempf said.

Fairview also keeps the doors locked into the clubhouse to limit the amount of people coming, and once someone walks out they can’t come back in. Restrooms are available outside, and food and drinks must be ordered on the back deck and then someone brings it out.

Staff ask that people participating in mini golf or at the golf course be patient and support them as they handle changes and work to meet everyone’s needs.

”We just want them to be safe and take care of themselves and the people around them,” Kempf said.

Lanny Frakes, secretary/treasurer for the Rushville-Sugar Lake Levee Association, points toward an approximate 800-foot break in the association’s agricultural levee in 2019, just outside Winthrop, Missouri. Because it is a nonfederal levee, the U.S. Army Corps of Engineers are uncertain when repairs can be made.

Seasons are now shifting, and summer is likely to bring more severe weather and flooding for Missouri and Kansas.

“The only flooding has been along the Platte River,” said Buchanan County Emergency Management Coordinator Bill Brinton. “It did not affect any homes.”

There still is some concern with the Rushville-Sugar Lake Levee.

“At this time, the levee is still down and that protects Lewis and Clark Village,” Brinton said.

Because it is a nonfederal levee, the U.S. Army Corps of Engineers is unsure when repairs will be able to be made.

May rainfall was below average, but NOAA’s three-month precipitation outlook predicts that we are 40% more likely to receive above average rainfall this summer.

Last month, Gavins Point Dam was able to reduce releases to its May average of 33,00 cubic feet per second, because there was below-average precipitation in the upper basin.

The U.S. Army Corps of Engineers recently gave a summer update over a web meeting.

In St. Joseph, the Missouri River started off June between the action and minor flood stage at 15.5 feet. Going into this week, the river is expected to continue dropping to near 12 feet.

Parade magazine takes an exclusive look at Padma Lakshmi during her early years in America and became the Top Chef host in an new docuseries, “Taste The Nation” beginning June 19 on Hulu. 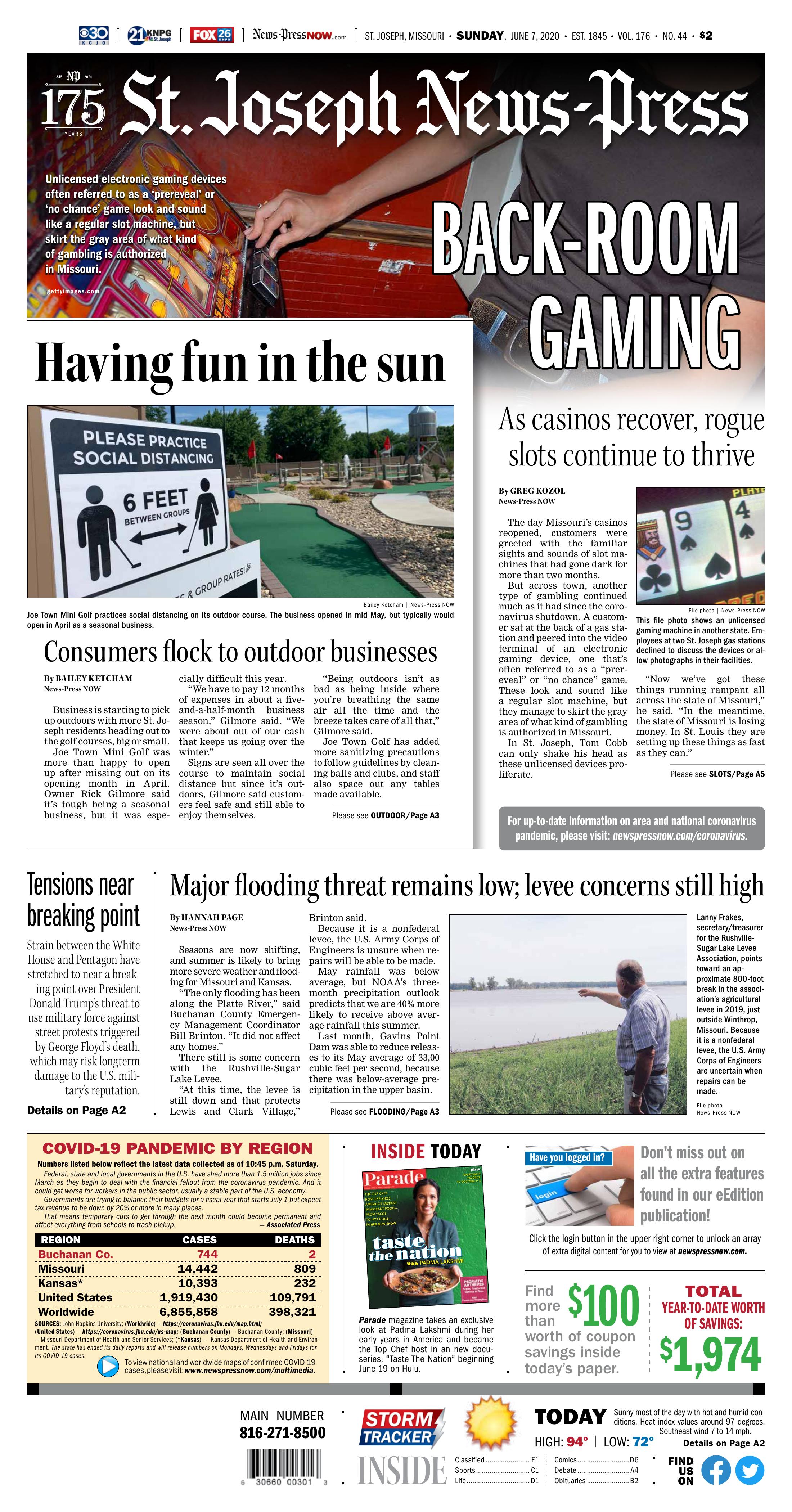