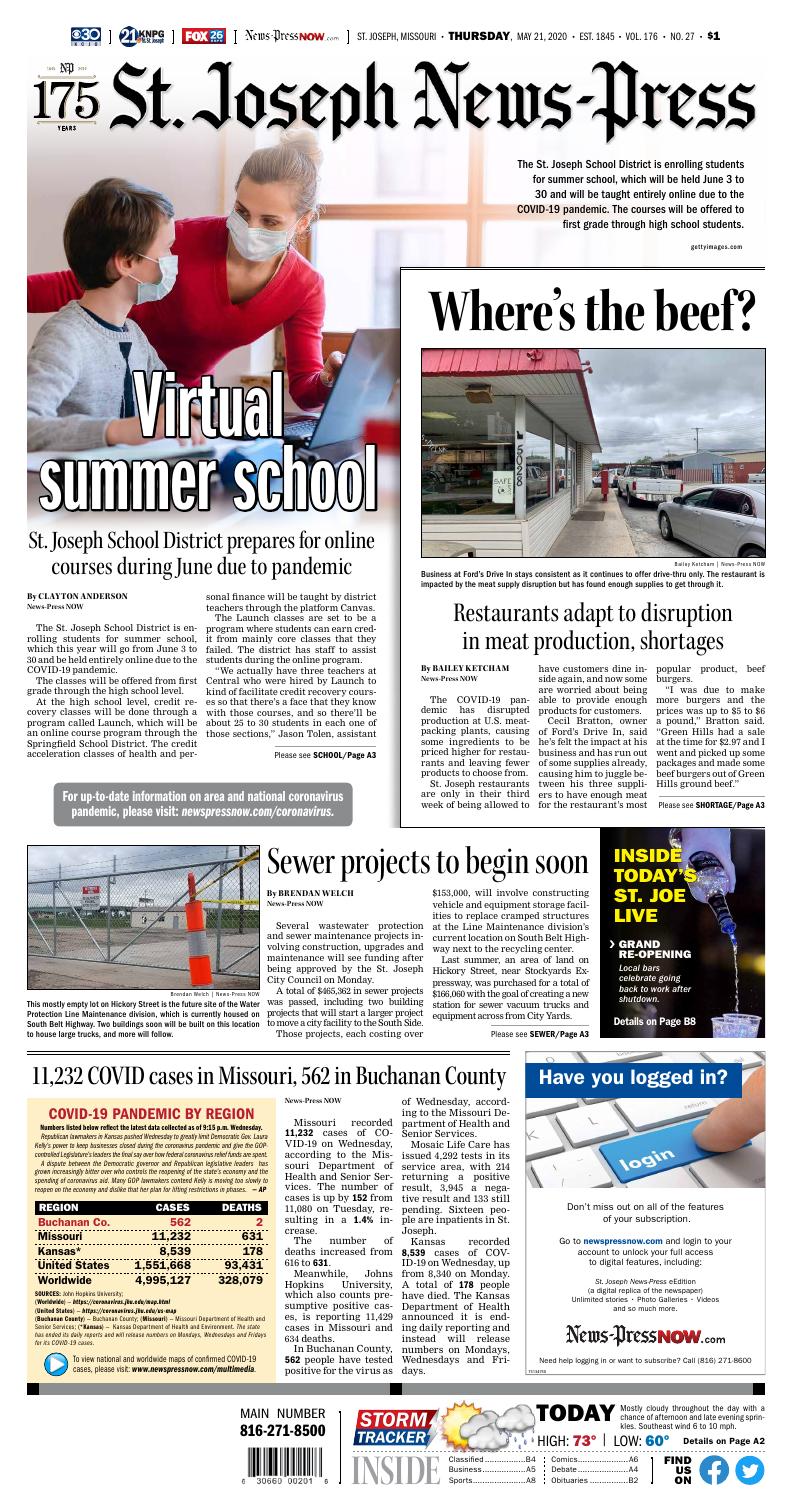 The St. Joseph School District is enrolling students for summer school, which will be held June 3 to 30 and will be taught entirely online due to the COVID-19 pandemic. The courses will be offered to first grade through high school students.

Credit recovery classes will be done through a program called Launch, which will be an online course program through the Springfield School District. The credit acceleration classes of health and personal finance will be taught by district teachers through the Canvas platform.

The St. Joseph School District is enrolling students for summer school, which this year will go from June 3 to 30 and be held entirely online due to the COVID-19 pandemic.

The classes will be offered from first grade through the high school level.

At the high school level, credit recovery classes will be done through a program called Launch, which will be an online course program through the Springfield School District. The credit acceleration classes of health and personal finance will be taught by district teachers through the platform Canvas.

The Launch classes are set to be a program where students can earn credit from mainly core classes that they failed. The district has staff to assist students during the online program.

“We actually have three teachers at Central who were hired by Launch to kind of facilitate credit recovery courses so that there’s a face that they know with those courses, and so there’ll be about 25 to 30 students in each one of those sections,” Jason Tolen, assistant principal at Central High School, said. “That staff is supposed to reach out, motivate, push and make contact with parents of the kids who aren’t making progress with those courses.”

Tolen, who is the director for summer school, said enrollment is down with some classes not being offered by Launch for credit recovery, but Central currently has 274 students enrolled.

For elementary students, the Launch website program will have theme-focused course offerings and summer learning academies to develop reading, math and coding skills.

Business at Ford’s Drive In stays consistent as it continues to offer drive-thru only. The restaurant is impacted by the meat supply disruption but has found enough supplies to get through it.

San Jose Steakhouse and Mexican grill is still offering taco Tuesdays and Thursdays amidst meat shortages. The restaurants suppliers said they should be able to supply enough meat but it’ll be higher prices.

The COVID-19 pandemic has disrupted production at U.S. meatpacking plants, causing some ingredients to be priced higher for restaurants and leaving fewer products to choose from.

St. Joseph restaurants are only in their third week of being allowed to have customers dine inside again, and now some are worried about being able to provide enough products for customers.

Cecil Bratton, owner of Ford’s Drive In, said he’s felt the impact at his business and has run out of some supplies already, causing him to juggle between his three suppliers to have enough meat for the restaurant’s most popular product, beef burgers.

“I was due to make more burgers and the prices was up to $5 to $6 a pound,” Bratton said. “Green Hills had a sale at the time for $2.97 and I went and picked up some packages and made some beef burgers out of Green Hills ground beef.”

Bratton said the only other alternative is to stop selling his most popular product until prices go down, but he doesn’t want to have to do that. Since Ford’s isn’t a franchise business, Bratton said he feels fortunate he can go to alternative places to get his supplies.

“Wendy’s or McDonald’s have certain product, but Cisco has a quarter pound patty and when I’m out of my regular patty I can use an alternative patty just to keep the product going,” Bratton said.

San Jose Steakhouse and Mexican Grill has come across similar issues with its suppliers’ prices going up, but owners Manuel Enriquez and Kevin Talbot said the restaurant is keeping its specials, including $1 beef tacos on Tuesdays and Thursdays.

“We’re adjusting day to day and if it looks like prices are going to get too high then we’ll raise the price of tacos, but right now we’re going to keep it at the dollar price to keep customers happy,” Talbot said.

Talbot said if the restaurant’s suppliers do run out then they’ll just go to stores for alternative products like everyone else. However, they’ve been told by suppliers that they’ll have enough to get through but prices will be high.

“It makes us feel good that we can get it, but every time you turn around the price changes on us and goes up,” Talbot said.

Both restaurants said they’ll just have to continue to adapt and substitute items if need be, but they are confident they can manage the supply disruption and still have enough food to sell to customers.

This mostly empty lot on Hickory Street is the future site of the Water Protection Line Maintenance division, which is currently housed on South Belt Highway. Two buildings soon will be built on this location to house large trucks, and more will follow.

Several wastewater protection and sewer maintenance projects involving construction, upgrades and maintenance will see funding after being approved by the St. Joseph City Council on Monday.

A total of $465,362 in sewer projects was passed, including two building projects that will start a larger project to move a city facility to the South Side.

Those projects, each costing over $153,000, will involve constructing vehicle and equipment storage facilities to replace cramped structures at the Line Maintenance division’s current location on South Belt Highway next to the recycling center.

Last summer, an area of land on Hickory Street, near Stockyards Expressway, was purchased for a total of $166,060 with the goal of creating a new station for sewer vacuum trucks and equipment across from City Yards.

Director of Public Works Andy Clements said the old buildings were just barely large enough to park the big trucks, and pulling out of the facility onto the Belt was difficult.

He said these buildings are the first of five that will be needed in order to move the entire operation.

“When they’re out of that (facility), we’ll do some renovations on the back end where recycling is and then we will sell the Belt Highway frontage and we will put that money back in our fund balance and move on,” Clements said.

He said the whole move is expected to be finished by summer of 2021.

The council also approved a $93,570 agreement with Visu-Sewer of Missouri LLC through contract price bidding through the city of Carthage, Missouri, to repair and line manholes.

The project will involve using fiberglass lining to repair and protect manholes from hydrogen sulfide gas, which is common in sewer lines, especially in areas with restaurants, industry or high elevation changes.

During an inspection two years ago, 11 concrete manholes in and around The Shoppes at North Village, along North Carriage Drive and on Stockyards Expressway were in need of repairs.

Clements said the funds should be enough for between 10 and 12 repairs, depending on the depth of the manholes.

The council also approved a $65,000 purchase of a pump station from Smith and Loveless Inc. to repair an aging one at the Water Protection facility.

“I believe the current pump station was installed in the early 1990s. Usually these package stations have a life of 25 to 30 years,” Clements said. “What was going on with that station is it was literally just rotting apart.”

Clements said replacement of the failing pump will begin when the supplies are received from the manufacturer of the Everest 1000 pump station.

Missouri recorded 11,232 cases of COVID-19 on Wednesday, according to the Missouri Department of Health and Senior Services. The number of cases is up by 152 from 11,080 on Tuesday, resulting in a 1.4% increase.

In Buchanan County, 562 people have tested positive for the virus as of Wednesday, according to the Missouri Department of Health and Senior Services.

Mosaic Life Care has issued 4,292 tests in its service area, with 214 returning a positive result, 3,945 a negative result and 133 still pending. Sixteen people are inpatients in St. Joseph.

Kansas recorded 8,539 cases of COVID-19 on Wednesday, up from 8,340 on Monday. A total of 178 people have died. The Kansas Department of Health announced it is ending daily reporting and instead will release numbers on Mondays, Wednesdays and Fridays. 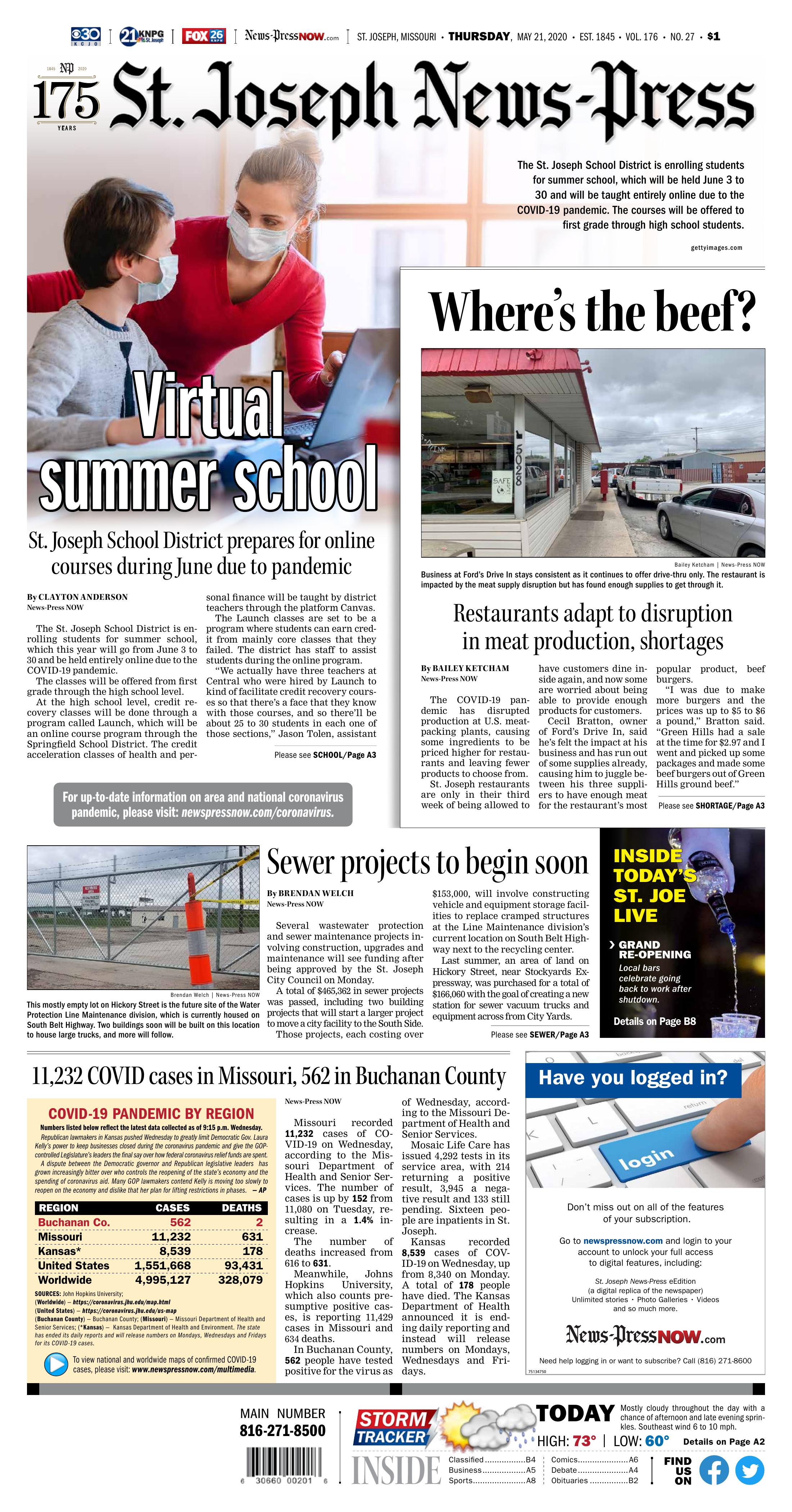