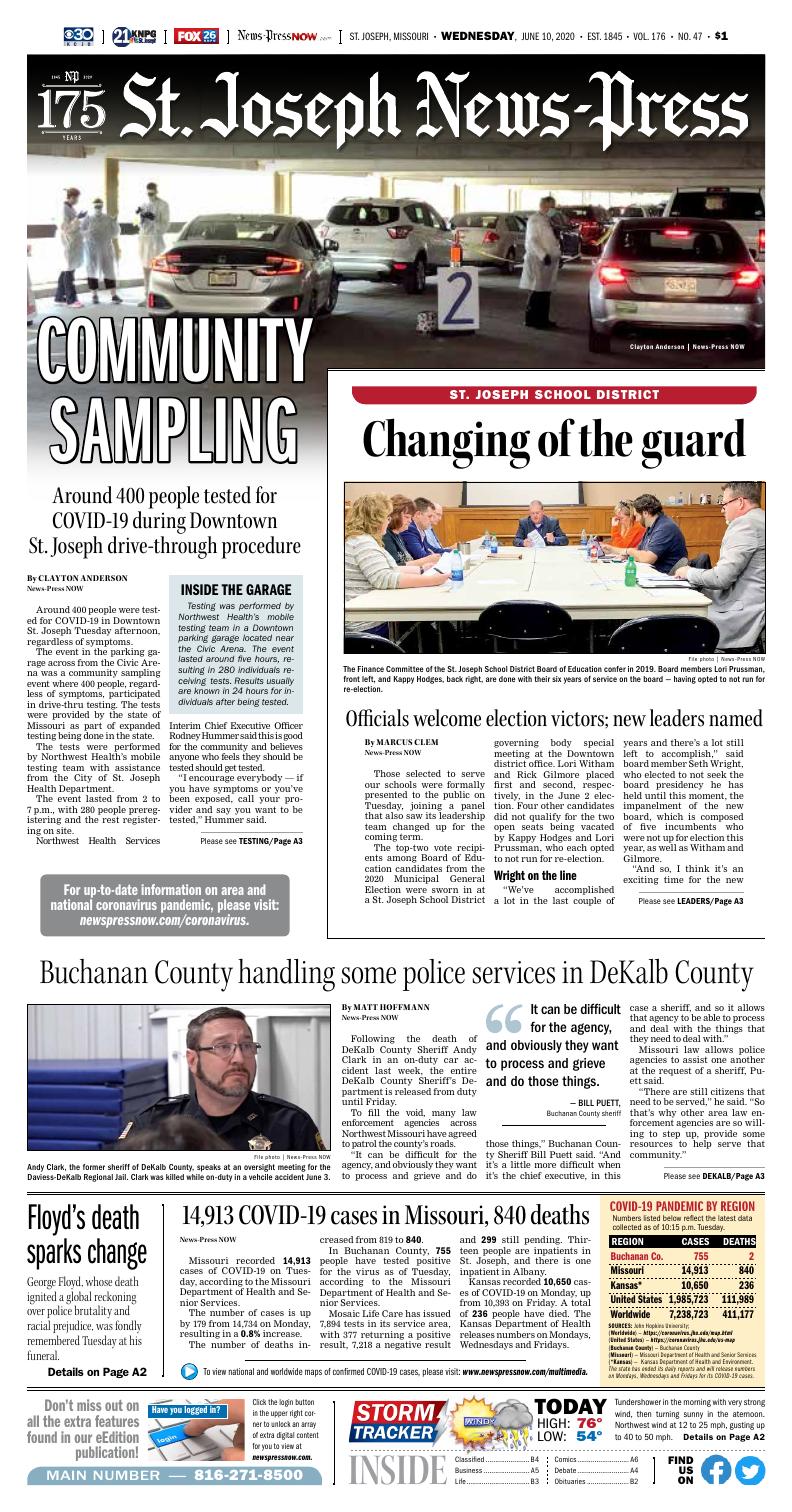 Cars lined through a drive-thru loop in the Downtown parking garage across from the Civic Arena in St. Joseph to get tested Tuesday afternoon.

Nurses swabbed individuals while seatd in their vehciles. Around 400 people who signed up were tested Tuesday during the Downtown event.

Around 400 people were tested for COVID-19 in Downtown St. Joseph Tuesday afternoon, regardless of symptoms.

The event in the parking garage across from the Civic Arena was a community sampling event where 400 people, regardless of symptoms, participated in drive-thru testing. The tests were provided by the state of Missouri as part of expanded testing being done in the state.

The tests were performed by Northwest Health’s mobile testing team with assistance from the City of St. Joseph Health Department.

The event lasted from 2 to 7 p.m., with 280 people preregistering and the rest registering on site.

Northwest Health Services Interim Chief Executive Officer Rodney Hummer said this is good for the community and believes anyone who feels they should be tested should get tested.

“I encourage everybody — if you have symptoms or you’ve been exposed, call your provider and say you want to be tested,” Hummer said.

While the temperature reached the 90s, Health Department Director Debra Bradley said all of the hard work by the staff helped the drive-thru testing go smoothly.

“It’s been a huge sacrifice on everybody’s part to be here in this heat. Northwest health and Health Department staff have had to be in full protective equipment in order to be that close to individuals, so we want them protected, but it’s it’s very warm inside those gowns and those face shields and mask, especially when you do it for six hours at a time,” Bradley said.

Hummer said he heard from multiple attendees how surprised they were with how quick the process went. He said the drive-thru testing has become very efficient with the mobile testing teams.

Bradley said this test will help the department understand the presence of the virus in the community and who could be carrying it.

“There are a lot of people who may be carrying the virus that they’re not aware, so this test scene is one of the ways that people can find If they have the virus, and if they need to take further steps to protect other people in their community,” Bradley said.

The Finance Committee of the St. Joseph School District Board of Education confer in 2019. Board members Lori Prussman, front left, and Kappy Hodges, back right, are done with their six years of service on the board — having opted to not run for re-election.

Those selected to serve our schools were formally presented to the public on Tuesday, joining a panel that also saw its leadership team changed up for the coming term.

The top-two vote recipients among Board of Education candidates from the 2020 Municipal General Election were sworn in at a St. Joseph School District governing body special meeting at the Downtown district office. Lori Witham and Rick Gilmore placed first and second, respectively, in the June 2 election. Four other candidates did not qualify for the two open seats being vacated by Kappy Hodges and Lori Prussman, who each opted to not run for re-election.

Wright on the line

“We’ve accomplished a lot in the last couple of years and there’s a lot still left to accomplish,” said board member Seth Wright, who elected to not seek the board presidency he has held until this moment, the impanelment of the new board, which is composed of five incumbents who were not up for election this year, as well as Witham and Gilmore.

“And so, I think it’s an exciting time for the new board,” Wright added. “I think it’s time to turn it over to someone else and let someone else kind of have the opportunity to lead the board as we kind of go in a new and different direction.”

With Superintendent Dr. Doug Van Zyl presiding, Wright nominated Tami Pasley to take over the presidency, with a tenure to last until April 2021. The nomination carried unanimously.

“I’m pleased to serve as your president, and look forward to having a good year,” Pasley said.

Wright followed up by nominating Lute Atieh to serve as board vice president. That vote also carried without objection. Wright then nominated Donna Baker as board secretary and Dr. Gabe Edgar as board treasurer. The vote carried unanimously. Wright retains his seat on the regular board and cast a vote in all of the matters at hand.

Before the special meeting at the district office, which took place without a live audience — as has each organized gathering of the school district’s governing body since March — for the sake of social distancing, Witham and Gilmore got right to work with the finance committee guided by Edgar, the assistant superintendent of business and operations.

Edgar called the committee’s attention to how the district has been subject to declining revenues in months past, in addition to emergency restrictions from the governor’s office from the aid payments Missouri provides to the district. However he emphasized that the school tax collection rate will be the biggest issue for the future, from a financial perspective.

The district typically enjoys a collection rate of 96 to 97%, Edgar said. However, at least $3.5 million likely will not be collected from local taxpayers that likely would have been available had COVID-19 not occurred. It is best to work with a conservative estimate, Edgar has argued; if his fears are realized, no more than 9 in 10 taxpayers will pay what is obligated.

As the district prepares to enter Fiscal Year 2021, the money is lined up to meet obligations for now, but the planning process for FY 2022 begins this fall and that is when the significant shortfall must be accounted for.

More than 3 in 4 of all the dollars the district spends on an annual basis is directed to paying staff, faculty and administrators either directly or in funding benefit programs. Thus, a major shortfall is certain to mean position eliminations, though the district hopes to do this primarily via allowing people to retire and then go without replacement, rather than by laying off personnel.

“I think it will come in higher than 90 (percent payment),” Edgar said. “But, it’s hard to guess. Obviously, we’ve never been in a position like this before. So, I think 90 is a good number.”

Andy Clark, the former sheriff of DeKalb County, speaks at an oversight meeting for the Daviess-DeKalb Regional Jail. Clark was killed while on-duty in a vehcile accident June 3.

To fill the void, many law enforcement agencies across Northwest Missouri have agreed to patrol the county’s roads.

“It can be difficult for the agency, and obviously they want to process and grieve and do those things,” Buchanan County Sheriff Bill Puett said. “And it’s a little more difficult when it’s the chief executive, in this case a sheriff, and so it allows that agency to be able to process and deal with the things that they need to deal with.”

Missouri law allows police agencies to assist one another at the request of a sheriff, Puett said.

“There are still citizens that need to be served,” he said. “So that’s why other area law enforcement agencies are so willing to step up, provide some resources to help serve that community.”

In addition, the Cameron Police Department is assisting with dispatch coverage.

Clark will be laid to rest at 1:30 p.m. Wednesday in Amity, Missouri. The St. Joseph Police Department, Missouri Department of Conservation and the Missouri Funeral Assistance Team were involved in the planning of Clark’s procession. The burial will be open to the public and take place at the Oak Cemetery.

Puett told News-Press NOW on Tuesday that more than 40 different law enforcement agencies have served as a “casket guard” for Clark’s body, meaning his casket has been attended at all times.

“The big focus and takeaway here is that everybody wants to honor and pay respect to a very good man and an outstanding sheriff,” Puett said. “They want to honor and support his family, as well as his DeKalb County Sheriff’s Office family.”

According to a Missouri State Highway Patrol crash report and social media posts by Northwest Missouri law enforcement agencies, Clark was killed when his vehicle was struck on Missouri Highway 33 while responding to a request for assistance from a fellow deputy.

Missouri recorded 14,913 cases of COVID-19 on Tuesday, according to the Missouri Department of Health and Senior Services.

In Buchanan County, 755 people have tested positive for the virus as of Tuesday, according to the Missouri Department of Health and Senior Services.

Mosaic Life Care has issued 7,894 tests in its service area, with 377 returning a positive result, 7,218 a negative result and 299 still pending. Thirteen people are inpatients in St. Joseph, and there is one inpatient in Albany.

Kansas recorded 10,650 cases of COVID-19 on Monday, up from 10,393 on Friday. A total of 236 people have died. The Kansas Department of Health releases numbers on Mondays, Wednesdays and Fridays. 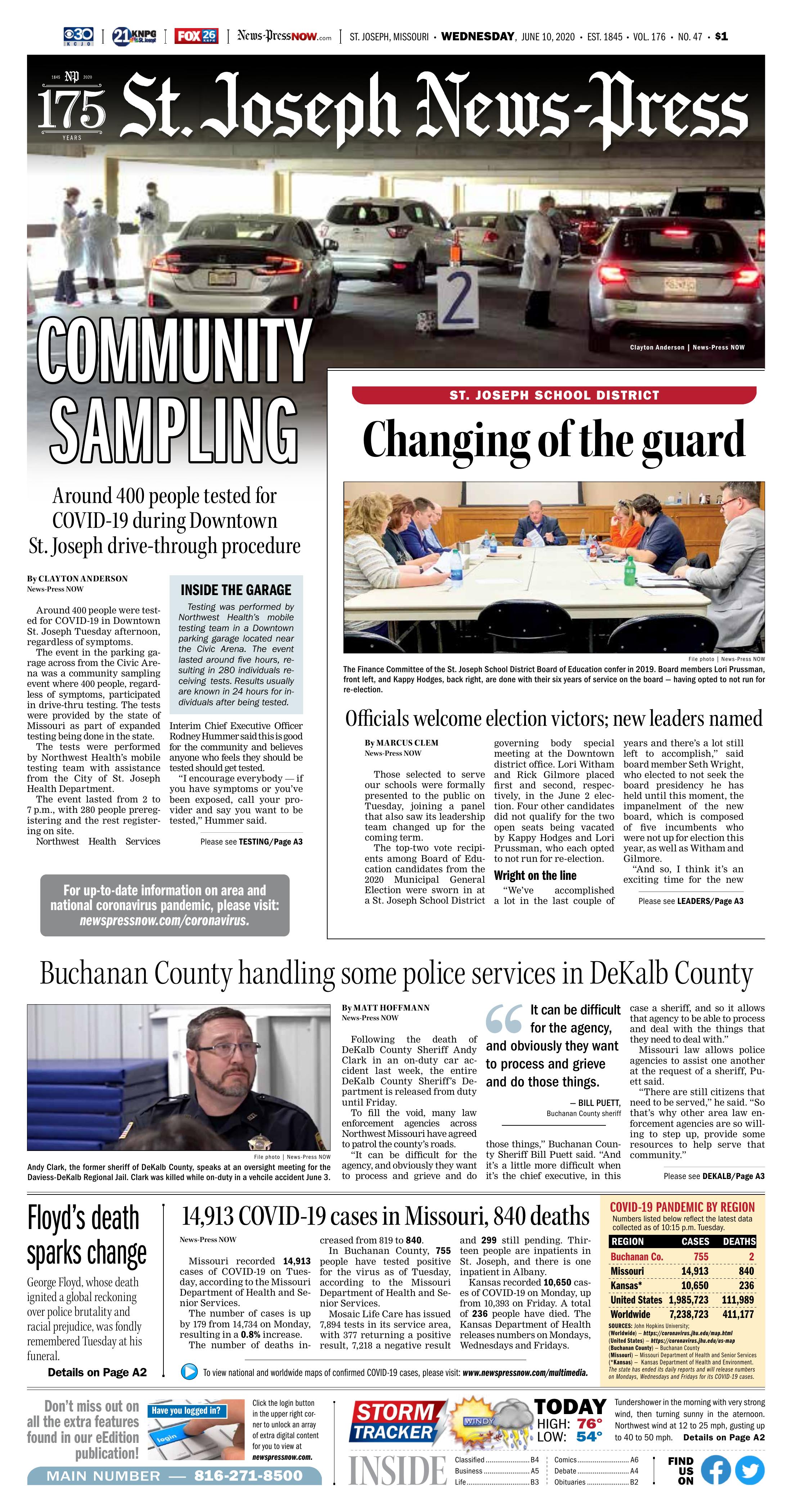 June 9, 2020 Board of Education / Reorganization Meeting