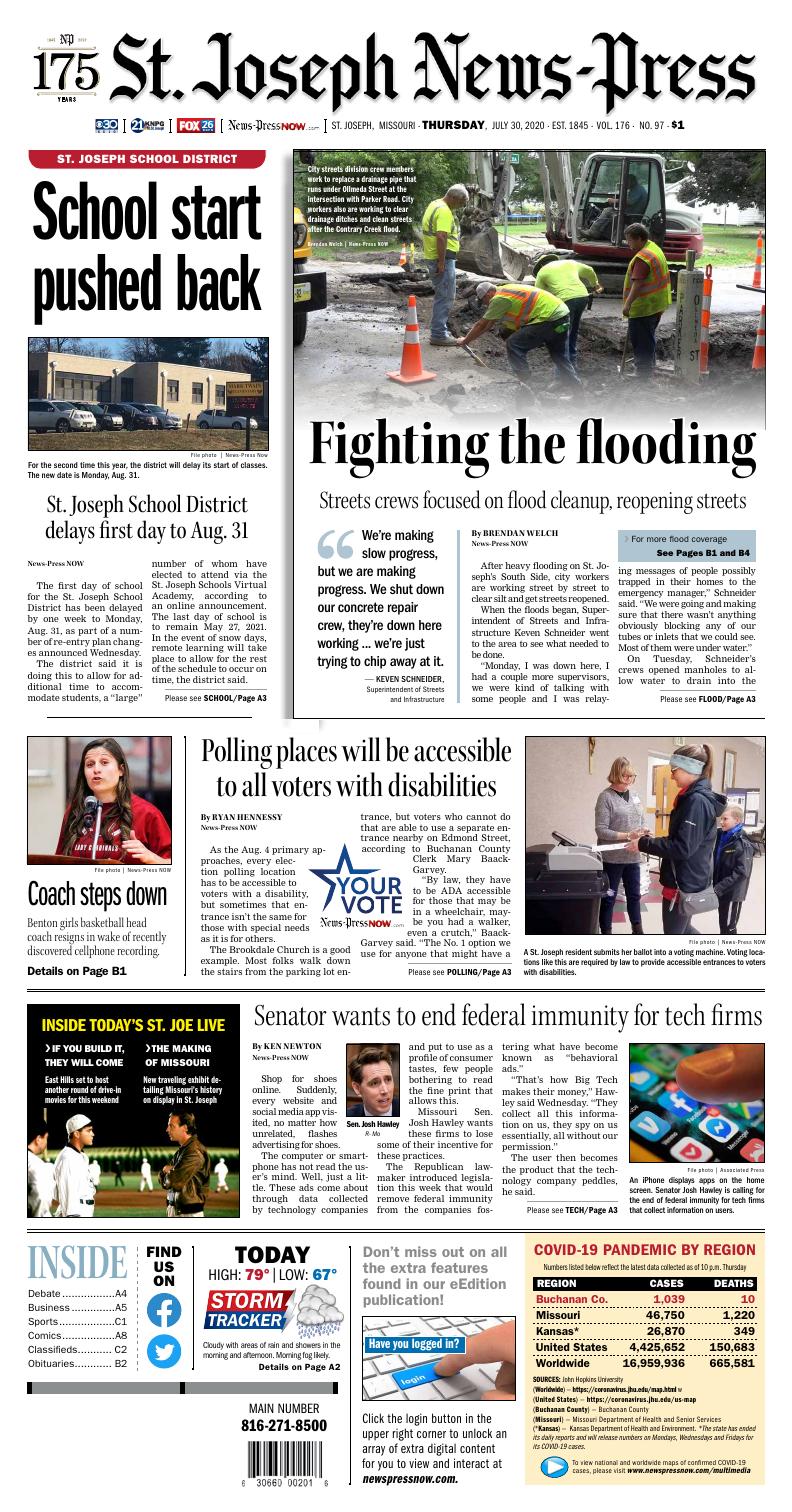 The original start of classes is in the rear-view mirror. A previous delay to Monday, Aug. 24, will be extended so that the first day of school will now be Monday, Aug. 31.

The first day of school for the St. Joseph School District has been delayed by one week to Monday, Aug. 31, as part of a number of re-entry plan changes announced Wednesday.

The district said it is doing this to allow for additional time to accommodate students, a “large” number of whom have elected to attend via the St. Joseph Schools Virtual Academy, according to an online announcement. The last day of school is to remain May 27, 2021. In the event of snow days, remote learning will take place to allow for the rest of the schedule to occur on time, the district said.

The district said it will use the one week delay to carve out additional time for IEP meetings; professional development for elementary staff persons; training on building re-entry guidelines; rearrangement of rooms; adjustments to schedules as necessary; staff “settl(ing) into” buildings; and training for the remote learning program.

In addition, face covering rules will be tightened. Anyone who enters a district facility or uses its transportation service will be required to wear a face covering at all times; this is a step up from the previous “expectation.” One stated exception will allow for removal of face coverings in situations where social distancing can be “clearly maintained for an extended period of time.”

“As a district, we want to protect the health and safety of everyone in our buildings,” the district said in its announcement. “Please talk to your children about the requirement of wearing a mask during the school day. Please plan to send a mask with your child daily, as a limited number of masks will be available at the school buildings.”

For more information, visit the Back to School section of the district website: https://www.sjsd.k12.mo.us/back_to_school.

City streets division crew members work to replace a drainage pipe that runs under Ollmeda Street at the intersection with Parker Road. City workers also are working to clear drainage ditches and clean streets after the Contrary Creek flood.

After heavy flooding on St. Joseph’s South Side, city workers are working street by street to clear silt and get streets reopened.

When the floods began, Superintendent of Streets and Infrastructure Keven Schneider went to the area to see what needed to be done.

“Monday, I was down here, I had a couple more supervisors, we were kind of talking with some people and I was relaying messages of people possibly trapped in their homes to the emergency manager,” Schneider said. “We were going and making sure that there wasn’t anything obviously blocking any of our tubes or inlets that we could see. Most of them were under water.”

On Tuesday, Schneider’s crews opened manholes to allow water to drain into the sewer system, which, according to Schneider, was not significantly damaged by the floods.

This week, cleanup continued for the drainage ditches and streets themselves. Extra crews have been assigned to help in order to speed up the long task.

“We’re making slow progress, but we are making progress,” Schneider said. “Our normal drainage crew is down here, we shut down our concrete repair crew, they’re down here working, doing some ditching also. So, we’re just trying to chip away at it.”

Schneider said the ditches will need to be cleared of muck and debris before the streets can be fully cleaned so that the water and mud has somewhere to go. The ditches also will help keep more flooding from occurring during regular rain events.

“They wouldn’t have really helped with all the water coming through, but since they are filled up with silt we’re trying to get it so if we have a normal rainfall, it will handle everything,” he said. “We’re ditching all the streets, then once we get that done we’re going to come through and sweep and flush them.”

City employees are limited to what they can do on private property, but residents and volunteers could be seen this week scraping streets with bulldozers and cleaning up debris.

A city crew on Wednesday was replacing a drainage pipe under Ollmeda Street near Parker Road in order to connect ditches on either sides.

Schneider said the cleanup will take some time and it will be awhile before the area will be back to normal as once green yards with pools, playlets and trampolines stood covered in silt from the nearby creek.

The City Council is looking into moving city workers around to provide more cleanup help and encourages the public to volunteer to help those affected by the flood.

On Wednesday, Mayor Bill McMurray released a video via YouTube asking for contributions or direct help.

“Please consider volunteering or making a donation to help those who were displaced as a result of the flooding,” McMurray said in the video. “InterServ is coordinating the relief efforts and is accepting food and financial donations. Financial contributions will be used for temporary housing needs, food, clothing and immediate needs.”

The video can be viewed at newspressnow.com.

As the Aug. 4 primary approaches, every election polling location has to be accessible to voters with a disability, but sometimes that entrance isn’t the same for those with special needs as it is for others.

The Brookdale Church is a good example. Most folks walk down the stairs from the parking lot entrance, but voters who cannot do that are able to use a separate entrance nearby on Edmond Street, according to Buchanan County Clerk Mary Baack-Garvey.

“By law, they have to be ADA accessible for those that may be in a wheelchair, maybe you had a walker, even a crutch,” Baack-Garvey said. “The No. 1 option we use for anyone that might have a disability, maybe a hard time getting out or a heart condition, whatever that may be, we always offer them the absentee ballot.”

So individuals with a disability have two options for voting in the Tuesday primary: in person at their assigned polling place or at the clerk’s office inside the courthouse on Jules Street.

Similarly, people who may be leaving town for work or may have a conflicting surgery also can vote absentee at the clerk’s office during business hours until Monday at 5 p.m.

Individuals who failed to register to vote in the primary still have time to register before the November election. Call the clerk’s office at 816-271-1412 to start the process.

“The last day to register to vote for November is on Oct. 7,” Baack-Garvey said. “If you want to request an absentee ballot, that always starts six weeks out, so I suggest that people wait to call mid-September, after Labor Day.”

In Missouri, voters can request a party ballot during the primary. A request to vote Democrat or Republican is not recorded in any way. However, voters cannot vote in both primaries.

Employers have to allow employees the chance to vote on election day. The statute allows for up to three hours to be taken out of the work day.

Missouri Sen. Josh Hawley, R-Mo., has introduced legislation, the BAD ADS Act, that would remove some federal protections from technology companies that use behavioral advertising or provide data intended for use in those ads.

Shop for shoes online. Suddenly, every website and social media app visited, no matter how unrelated, flashes advertising for shoes.

The computer or smartphone has not read the user’s mind. Well, just a little. These ads come about through data collected by technology companies and put to use as a profile of consumer tastes, few people bothering to read the fine print that allows this.

Missouri Sen. Josh Hawley wants these firms to lose some of their incentive for these practices.

The Republican lawmaker introduced legislation this week that would remove federal immunity from the companies fostering what have become known as “behavioral ads.”

“That’s how Big Tech makes their money,” Hawley said Wednesday. “They collect all this information on us, they spy on us essentially, all without our permission.”

The user then becomes the product that the technology company peddles, he said.

The legislation bears the title of Behavioral Advertising Decisions Are Downgrading Services Act. Or, for short, the BAD ADS Act.

A consistent critic of technology and social media platforms that lay claim to considerable consumer information, Hawley intends for the bill to remove liability immunity afforded to companies by Section 230 of federal communications law.

In an interview Wednesday with the News-Press NOW, the senator said Washington should not be in the business of subsidizing these highly lucrative companies.

“Right now the federal government gives Big Tech this special immunity, and they get it even when they’re engaging in this kind of systematic manipulation,” Hawley said. “So my bill would withdraw that federal subsidy, that federal shield, and make them stand on their own two feet.”

Also on Wednesday, the chief executive officers of some of the biggest technology companies, including Google, Apple, Amazon and Facebook, provided testimony in an anti-trust hearing held by a U.S. House subcommittee.

Hawley, on the Senate side of the Capitol, wishes he had an opportunity to question the witnesses, who appeared over internet connections.

“I’d like to know, first of all, where’s the actual competition in any of their industries?” he said. “Can any one of them point to an actual competitor who is anywhere close to ballpark to them in terms of market power and control?” 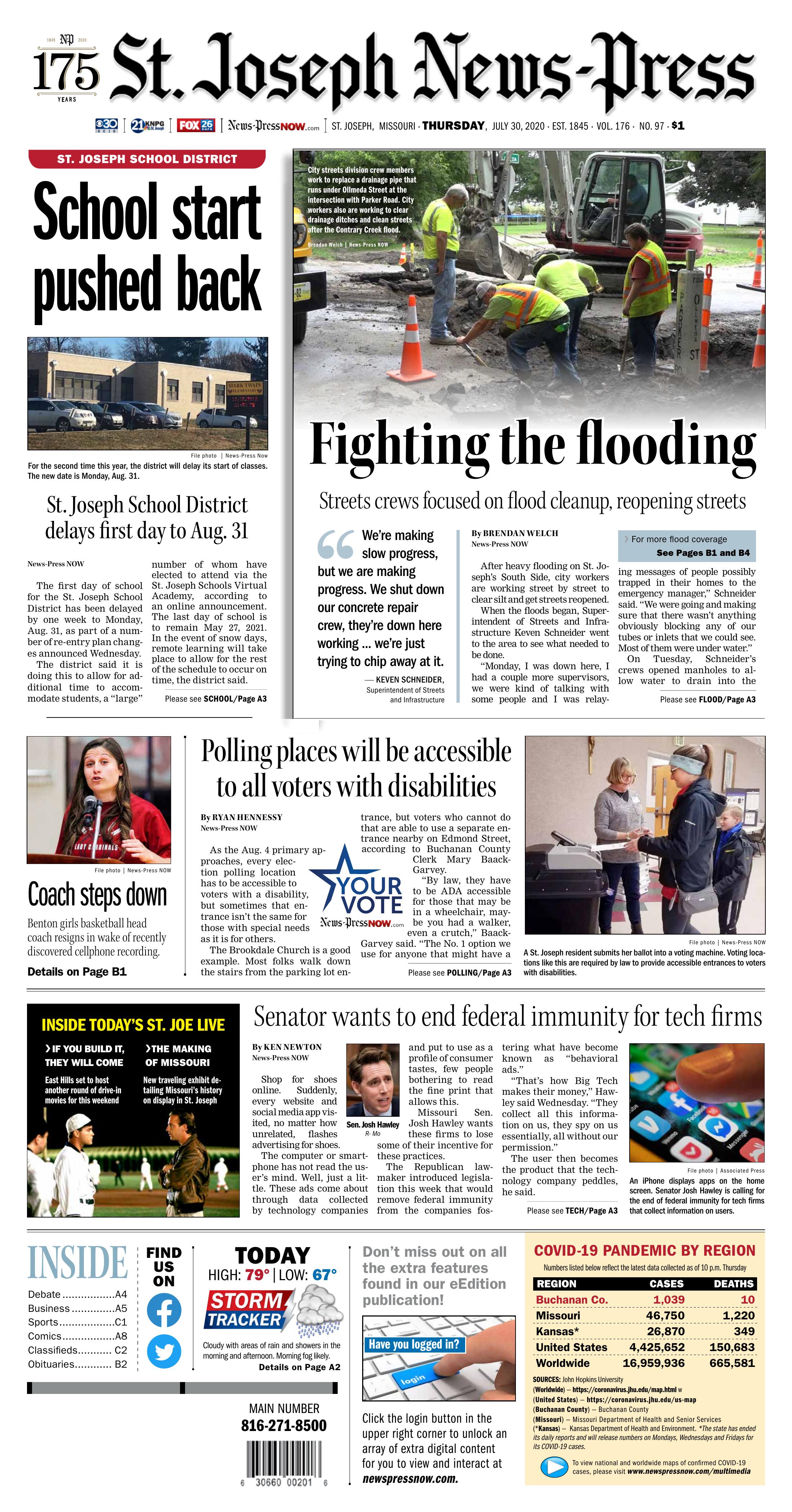 All polls are ADA compliant