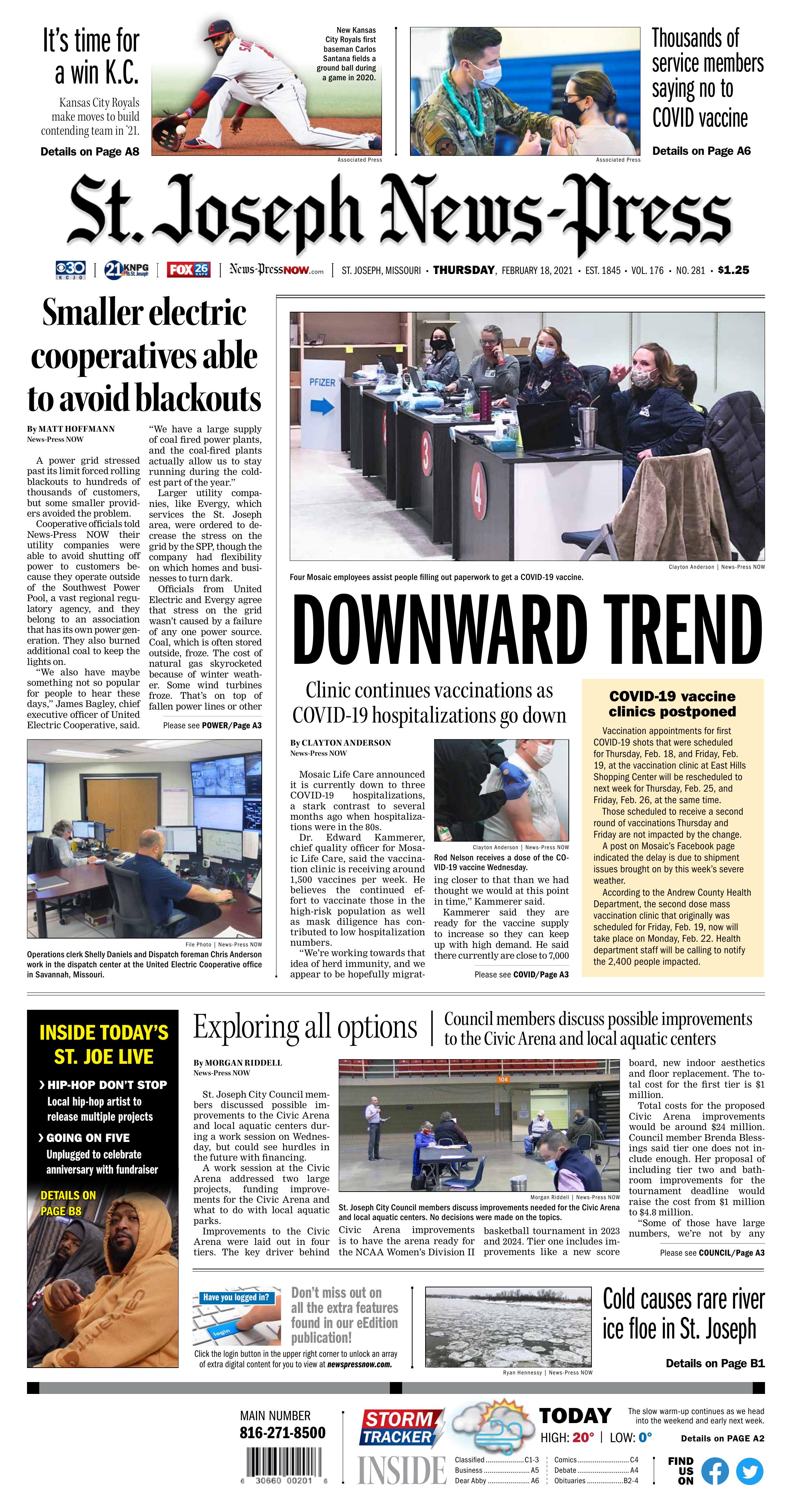 Four Mosaic employees assist people filling out paperwork to get a COVID-19 vaccine.

Michelle Nelson receives a dose of the COVID-19 vaccine Wednesday. As more people get vaccinated, hospitalization numbers are trending downward.

Rod Nelson receives a dose of the COVID-19 vaccine Wednesday.

Dr. Edward Kammerer, chief quality officer for Mosaic Life Care, said the vaccination clinic is receiving around 1,500 vaccines per week. He believes the continued effort to vaccinate those in the high-risk population as well as mask diligence has contributed to low hospitalization numbers.

“We’re working towards that idea of herd immunity, and we appear to be hopefully migrating closer to that than we had thought we would at this point in time,” Kammerer said.

Kammerer said they are ready for the vaccine supply to increase so they can keep up with high demand. He said there currently are close to 7,000 people on the waiting list.

“We’re still having a significant appetite in our region to get the vaccination done,” Kammerer said.

When COVID-19 hospitalizations were at their high point at Mosaic Life Care, officials had said staffing was tight and they were looking at agency nursing staffs to help with the demand. With the numbers dramatically dropping, staff have been able to receive some much needed rest.

“This has been super beneficial for our staff, we’ve been able to take a little bit of a breather, we have people who now can take vacations ... and not spend so much time on overtime,” Kammerer said.

“It’s not impossible that we won’t see another spike moving forward, especially once we start to relax our restrictions inside of our country, the people who are unvaccinated are going to be at risk,” Kammerer said.

Related
Some vaccinations set for Thursday, Friday moved to next week
By News-Press NOW
Updated Feb 17, 2021

Vaccination appointments for first COVID-19 shots that were scheduled for Thursday, Feb. 18, and Friday, Feb. 19, at the vaccination clinic at…

Those scheduled to receive a second round of vaccinations Thursday and Friday are not impacted by the change.

A post on Mosaic's Facebook page indicated the delay is due to shipment issues brought on by this week's severe weather.

According to the Andrew County Health Department, the second dose mass vaccination clinic that originally was scheduled for Friday, Feb. 19, now will take place on Monday, Feb. 22. Health department staff will be calling to notify the 2,400 people impacted.

A power grid stressed past its limit forced rolling blackouts to hundreds of thousands of customers, but some smaller providers avoided the problem.

Cooperative officials told News-Press NOW their utility companies were able to avoid shutting off power to customers because they operate outside of the Southwest Power Pool, a vast regional regulatory agency, and they belong to an association that has its own power generation. They also burned additional coal to keep the lights on.

“We also have maybe something not so popular for people to hear these days,” James Bagley, chief executive officer of United Electric Cooperative, said. “We have a large supply of coal fired power plants, and the coal-fired plants actually allow us to stay running during the coldest part of the year.”

Larger utility companies, like Evergy, which services the St. Joseph area, were ordered to decrease the stress on the grid by the SPP, though the company had flexibility on which homes and businesses to turn dark.

Officials from United Electric and Evergy agree that stress on the grid wasn’t caused by a failure of any one power source. Coal, which is often stored outside, froze. The cost of natural gas skyrocketed because of winter weather. Some wind turbines froze. That’s on top of fallen power lines or other mechanical issues.

“We’re part of an independent system of cooperatives that basically has its own power generation and transmission system,” Garrett Poorman, communications director for Platte-Clay, said. “So the reason that that system has been able to maintain power up to this point without having to institute any forced outages is because we have an extremely diverse (power) supply.”

In contrast, the SPP covers a 17 state region, with power generation coming from dozens of sources and locations. Normally, the larger region benefits companies like Evergy because they can receive additional power when needed from an area of the country that has an excess.

But with brutal winter conditions blanketing much of the United States, there wasn’t excess power to go around. The Associated Electric Cooperative is more centralized than the SPP, serving just three states, Missouri, Oklahoma and Iowa, according to its website.

The SPP also used coal as its primary energy generation Tuesday, during the forced outages, but Evergy and other power companies were required to institute blackouts.

SPP is considered a regional transmission organization, while the Associated Electric Cooperative is not.

“If you’re in an RTO, at times you have rules come into play on the cross flows between one company to another,” Bagley said. “But in our case, not being a member of an RTO, we can make our own plans. In our case, having independence helped us get through without having rolling blackouts.”

Bagley acknowledged that United Electric was “very close” to instituting rolling blackouts but forecasted that would likely be unnecessary going forward.

Both Poorman and Bagley recognized customers would be seeing a significant increase in their electricity bills because of increased costs. Power plants are running at max capacity, and employees are being paid overtime to keep the grid online.

Poorman urged Platte-Clay customers to get in touch with a customer service representative if they cannot pay their bill, and that the co-op would work out an individual payment plan. Customers will also soon receive credits because they are part owners of the company under its structure.

Bagley said United-Electric has imposed a moratorium on disconnections until April, and consumers, who are also part-owners, could be put on yearlong payment plans if necessary.

Both the SPP, Platte Clay and United Electric are all encouraging consumers to limit their power consumption as the grid still experiences stress.

St. Joseph City Council members discuss improvements needed for the Civic Arena and local aquatic centers. No decisions were made on the topics.

St. Joseph City Council members discussed possible improvements to the Civic Arena and local aquatic centers during a work session on Wednesday, but could see hurdles in the future with financing.

Improvements to the Civic Arena were laid out in four tiers. The key driver behind Civic Arena improvements is to have the arena ready for the NCAA Women’s Division II basketball tournament in 2023 and 2024. Tier one includes improvements like a new score board, new indoor aesthetics and floor replacement. The total cost for the first tier is $1 million.

Total costs for the proposed Civic Arena improvements would be around $24 million. Council member Brenda Blessings said tier one does not include enough. Her proposal of including tier two and bathroom improvements for the tournament deadline would raise the cost from $1 million to $4.8 million.

“Some of those have large numbers, we’re not by any means putting this in front of you saying we want all this approval, we just want to show you what we are looking at,” said Bryan Carter, St. Joseph’s interim city manager.

Council member Brian Meyers shared concerns about the foundation of the Civic Arena and asked for a yearly gross revenue report before making decisions. Some improvements include cracking in walls due to heavy cement as well as sidewalk failures.

Discussions then shifted to the aquatic centers in St. Joseph. Lap pools at St. Joseph Aquatic Park and Northside Complex are up to 20 years past its expected useful life.

Carter said key reasons for pool improvements are because they are outdated and getting shut down. The proposal for local pools includes four options. The first option, which would cost roughly $6 million, would replace Aquatic Park or Krug Pool but not improve any amenities. Another option would require over $15 million to redesign and improve the existing Aquatic Park.

The second option has additional costs because it was discovered there is a floodplain or floodway near the area. New construction cannot be done in the area without engineered hydrological analysis. Analysis deemed a new site would be needed for new construction.

Russell Moore said he is not sure why it would flood if it never has. He says if that is a true concern, then they would save more by filling in the lap pool and giving attention elsewhere.

Council member Kent O’Dell said they should look at replacing the lap pool near Krug park with a smaller option.

Council members took a tour of the Civic Arena to view items in need of improvement. Members shared concerns about long term revenue for these projects. Nothing was officially voted on at the work session. How these improvements will be funded has not been decided on.