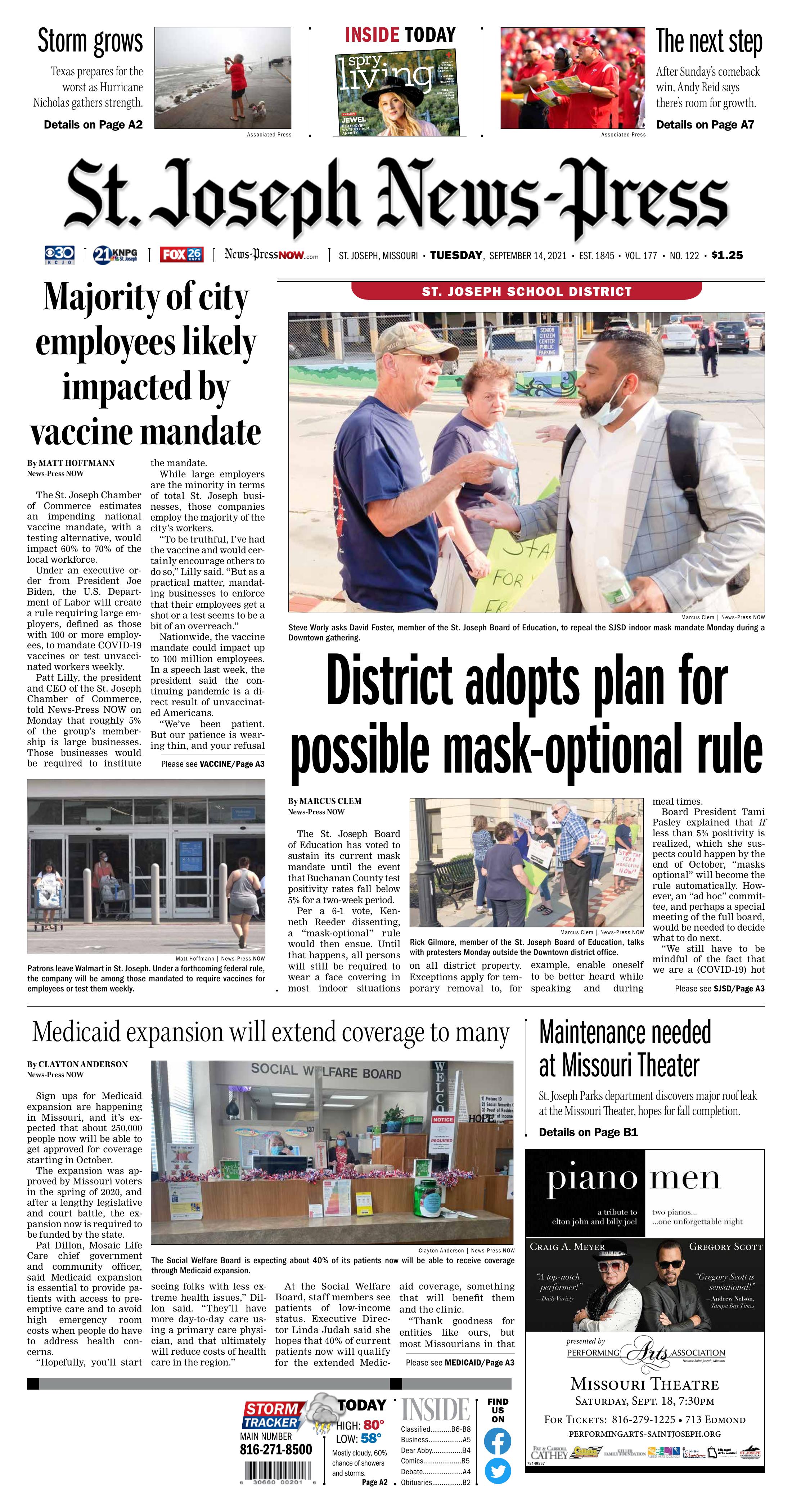 The St. Joseph Board of Education has voted to sustain its current mask mandate until the event that Buchanan County test positivity rates fall below 5% for a two-week period.

Per a 6-1 vote, Kenneth Reeder dissenting, a “mask-optional” rule would then ensue. Until that happens, all persons will still be required to wear a face covering in most indoor situations on all district property. Exceptions apply for temporary removal to, for example, enable oneself to be better heard while speaking and during meal times.

Board President Tami Pasley explained that if less than 5% positivity is realized, which she suspects could happen by the end of October, “masks optional” will become the rule automatically. However, an “ad hoc” committee, and perhaps a special meeting of the full board, would be needed to decide what to do next.

“We still have to be mindful of the fact that we are a (COVID-19) hot spot,” Pasley said. “According to the State of Missouri, and according to the county medical associations around the state, much of the area is still a hot spot. We can’t just arbitrarily say one day, ‘No masks,’ and then the next day it goes up, and then we’re ping ponging back and forth.”

According to data compiled by the U.S. Department of Health and Human Services, as of Monday, the 14-day average test positivity for the county was about 10%. The school board reviewed data showing that the latest daily figure is 7.51% test positivity. The 14-day trend is updated weekly.

Before the meeting, about 20 people showed up outside the Downtown district office to demand a complete repeal of the mask mandate. A little more than a dozen then went inside to observe the meeting and display signs such as “No Mask Mandates.” However, no public comment session was part of the board agenda. Nobody made the attempt to speak after Pasley advised interruptions could prompt removal. A St. Joseph Police Department officer attended to assist with meeting security.

The motion approved 6-1, verbatim, was “to continue the mask mandate until the county positivity rate falls below 5% for two weeks straight.”

“Just to clarify for everybody, masks are still in place until there’s two weeks straight of below 5% test positivity,” Superintendent Doug Van Zyl said.

Reeder said he voted “no” because he believes that most parents don’t want a mask mandate, and whether their child should wear one is a matter of “parental choice.”

A new community survey — of the kind the board conducted last month — should take place to confirm this, Reeder said. Results in August showed just over half of voting constituents wanted a mask mandate at that time. However, district leaders acknowledged at the time that there was no hard-and-fast mechanism to stop double voting; instead, certain data sets were filtered afterward.

However, on Monday, Reeder did not win immediate support for an effort to organize a new survey. He said he will continue to work on this, as he wants more public input before the board takes further action, rather than just relying on COVID-19 test data.

“I think it’s almost like playing the lottery at this point,” he said. “I don’t know what to expect on it. We need to monitor it closely.”

The St. Joseph Chamber of Commerce estimates an impending national vaccine mandate, with a testing alternative, would impact 60% to 70% of the local workforce.

Under an executive order from President Joe Biden, the U.S. Department of Labor will create a rule requiring large employers, defined as those with 100 or more employees, to mandate COVID-19 vaccines or test unvaccinated workers weekly.

Patt Lilly, the president and CEO of the St. Joseph Chamber of Commerce, told News-Press NOW on Monday that roughly 5% of the group’s membership is large businesses. Those businesses would be required to institute the mandate.

While large employers are the minority in terms of total St. Joseph businesses, those companies employ the majority of the city’s workers.

“To be truthful, I’ve had the vaccine and would certainly encourage others to do so,” Lilly said. “But as a practical matter, mandating businesses to enforce that their employees get a shot or a test seems to be a bit of an overreach.”

Nationwide, the vaccine mandate could impact up to 100 million employees. In a speech last week, the president said the continuing pandemic is a direct result of unvaccinated Americans.

“We’ve been patient. But our patience is wearing thin, and your refusal has cost all of us,” Biden said last week.

Mosaic Life Care also would be impacted, but the hospital system previously announced it is requiring vaccines for all employees in a staggered system.

The News-Press and Gazette Company also would fall under the mandate.

“I think there begins to be some question, for example, in a manufacturing environment,” said Lilly, musing about requiring vaccines or testing for all kinds of businesses. “I think it becomes a little more questionable what the effect is of not having the shot relative to workplace safety.”

Biden’s executive order requires the Department of Labor to craft a regulation mandating the shots or testing. The text of that regulation has not yet been released, and it could be some time before the rule goes into effect.

The rule will be enforced by the Occupational Safety and Health Administration and carries penalties of $14,000 per violation, an administration official told the Associated Press.

Buchanan County continues to lag behind the country and the state in vaccination rates. For example, in Platte County, more than 54% of eligible residents are fully vaccinated. In Buchanan County, only about 22% of residents have received both shots.

contributed to this report

The Social Welfare Board is expecting about 40% of its patients now will be able to receive coverage through Medicaid expansion.

Sign ups for Medicaid expansion are happening in Missouri, and it’s expected that about 250,000 people now will be able to get approved for coverage starting in October.

The expansion was approved by Missouri voters in the spring of 2020, and after a lengthy legislative and court battle, the expansion now is required to be funded by the state.

At the Social Welfare Board, staff members see patients of low-income status. Executive Director Linda Judah said she hopes that 40% of current patients now will qualify for the extended Medicaid coverage, something that will benefit them and the clinic.

“Thank goodness for entities like ours, but most Missourians in that coverage gap could not get care, and that’s when you start seeing unnecessary visits to the emergency room because they’re using the ER as their primary care doctor,” Judah said.

Judah said she hopes to see upward of $200,000 per year from Medicaid reimbursement payments to her clinic. That will raise the percentage from 6% to 20% of the operating cost being funded by Medicaid.

The board is funded by 18 different entities, with the major contribution coming from the county and the city. With limited ability to fundraise, Medicaid expansion could be a game-changer, she said.

“We’ve not been able to do virtually any fundraising for the last two years, and so that has put a big damper on our operations,” Judah said. “We’ve had to be creative, and trying to find revenues and other capacities, thank goodness for a lot of generous people in this community. But, you know, that’s not sustainable.”

The Social Welfare Board and Mosaic Life Care are working with patients to help educate them on getting signed up for coverage.

Related
1:14 Medicaid Expansion Will Be Available In October
Updated Sep 13, 2021
Back

Medicaid Expansion Will Be Available In October