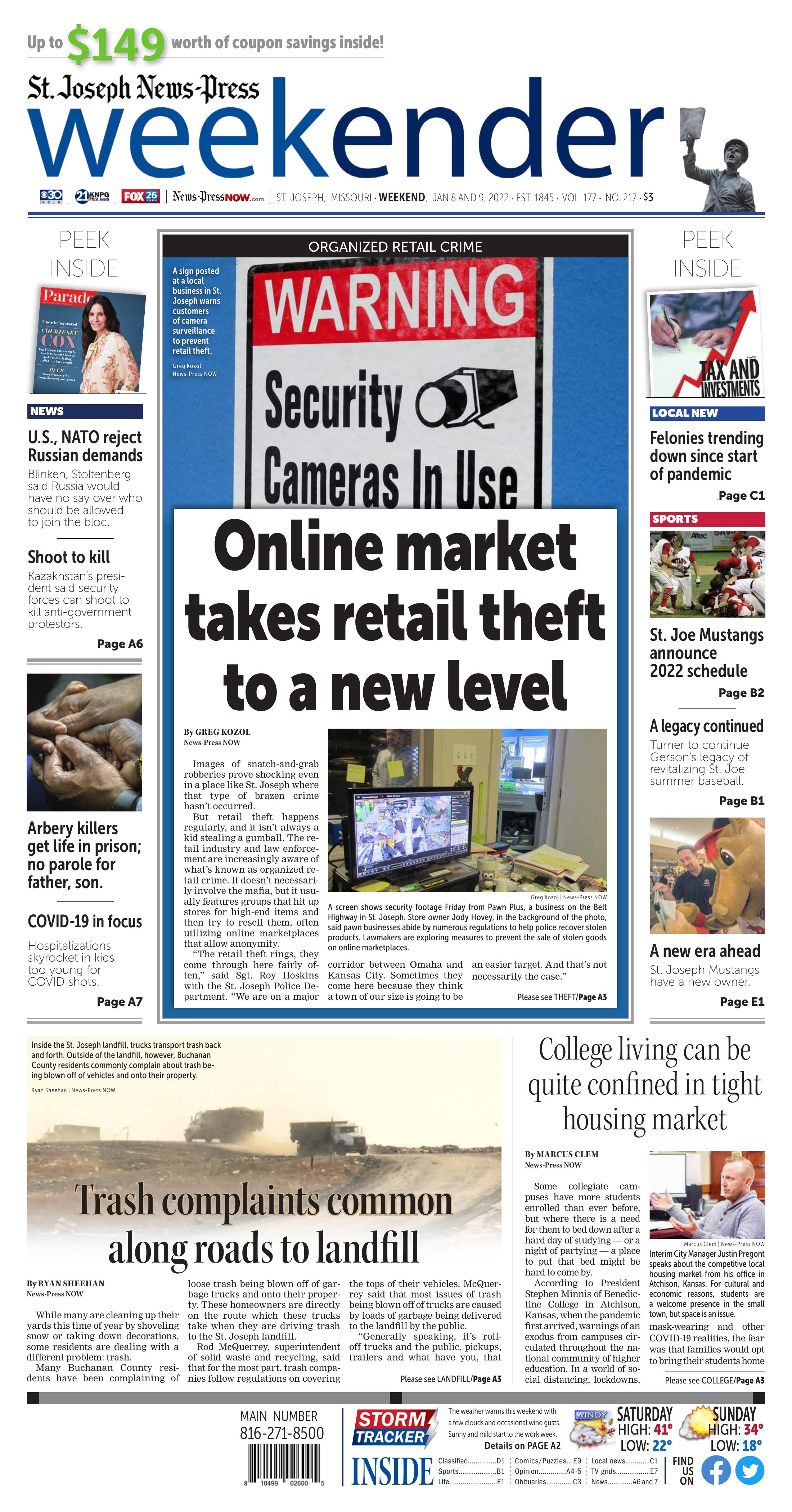 A screen shows security footage Friday from Pawn Plus, a business on the Belt Highway in St. Joseph. Store owner Jody Hovey, in the background of the photo, said pawn businesses abide by numerous regulations to help police recover stolen products. Lawmakers are exploring measures to prevent the sale of stolen goods on online marketplaces.

A sign posted at a local business in St. Joseph warns customers of camera surveillance to prevent retail theft.

Images of snatch-and-grab robberies prove shocking even in a place like St. Joseph where that type of brazen crime hasn’t occurred.

But retail theft happens regularly, and it isn’t always a kid stealing a gumball. The retail industry and law enforcement are increasingly aware of what’s known as organized retail crime. It doesn’t necessarily involve the mafia, but it usually features groups that hit up stores for high-end items and then try to resell them, often utilizing online marketplaces that allow anonymity.

“The retail theft rings, they come through here fairly often,” said Sgt. Roy Hoskins with the St. Joseph Police Department. “We are on a major corridor between Omaha and Kansas City. Sometimes they come here because they think a town of our size is going to be an easier target. And that’s not necessarily the case.”

Hoskins, who works in crime prevention, said St. Joseph isn’t targeted as much as bigger cities. Overall, St. Joseph police reported 2,278 thefts in 2021, a 21% drop from the previous year. There was no breakdown on how many were thefts from businesses, but police officials said shoplifting cases were down in 2021.

But retail officials aren’t always worried about the number of thefts. They’re concerned about the amount of the loss.

A National Retail Federation survey found that organized retail crime now costs stores an average of $700,000 per $1 billion in sales. A retailer’s average loss per shoplifting incident climbed from $270 in 2019 to $461 in 2020, according to the survey. About half of retailers reported an average dollar loss of $1,000, according to the NRF.

Retailers try to counter the trend with security, locking up high-end items and using technology like GPS tracking and alarm tags. But Tony Sheppard, director of loss prevention solutions for ThinkLP, said the trend continues to grow because of the ease of reselling stolen items online.

“There was more demand for product in the online market and therefore more demand for stolen products,” Sheppard said in a National Retail Federation podcast. In addition to electronics, organized theft gangs tend to target clothing, laundry detergent, designer handbags, allergy medicine, razors, high-end liquor and pain relievers, according to the retail federation.

In Missouri, one state representative filed legislation that seeks to define organized retail crime and stiffen penalties for those who steal from multiple stores.

“It acknowledges the fact that there are groups of people who do this in an organized fashion,” said Rep. Lane Roberts, R-Joplin. “It’s a big, big deal. Retail theft is a high-dollar crime. It has a big impact on the economy.”

Under House Bill 2108, a person engaged in organized retail theft would face a Class C or Class B felony, depending on the dollar amount of the stolen merchandise. Roberts, a former Joplin police chief, also seeks greater accountability from the online platforms that can be used to resell stolen items.

His proposal would require online marketplaces to verify certain information from high-volume, third-party sellers. This could include bank information, a photo ID or a physical address, phone number or email account.

Roberts anticipates some pushback, but he believes this is the best way to tackle the problem. A comparison could be made with a pawn shop, which has a legal responsibility to work with police and avoid dealing in stolen items.

“I wrestled with the idea,” Roberts said. “There is some level of responsibility.”

Hoskins, in St. Joseph, said he supports tougher action against shoplifting. It’s a crime that might fly under the radar, but it still has an impact on businesses and police resources.

“There’s so many different motivations behind it,” he said. “Some steal food to provide for their family. Some do it as an impulsive thing, as a thrill perhaps. Some do it for resale. Retail crime, shoplifting, has always been there, and it probably always will be.”

Inside the St. Joseph landfill, trucks transport trash back and forth. Outside of the landfill, however, Buchanan County residents commonly complain about trash being blown off of vehicles and onto their property.

While many are cleaning up their yards this time of year by shoveling snow or taking down decorations, some residents are dealing with a different problem: trash.

Many Buchanan County residents have been complaining of loose trash being blown off of garbage trucks and onto their property. These homeowners are directly on the route which these trucks take when they are driving trash to the St. Joseph landfill.

Rod McQuerrey, superintendent of solid waste and recycling, said that for the most part, trash companies follow regulations on covering the tops of their vehicles. McQuerrey said that most issues of trash being blown off of trucks are caused by loads of garbage being delivered to the landfill by the public.

“Generally speaking, it’s roll-off trucks and the public, pickups, trailers and what have you, that load their stuff up and don’t get it secure properly,” he said.

McQuerrey said that roll-off trucks, which are vehicles with box tops, and pickups are the biggest problem because their loads are not secured by a tarp and trash can be blown off.

He said the landfill does charge fees for both commercial and public drivers for transporting loads without a tarp.

For picking up trash, McQuerrey said the landfill has an agreement with the Missouri Department of Transportation on which stretches of highway each cover.

Buchanan County Sheriff Bill Puett said that any law enforcement officer, including those from his office, can provide a summons for a truck that is improperly securing a load of trash.

Not only does the St. Joseph landfill receive calls on the subject, but the Buchanan County Commission does as well.

“We get quite a few (calls), daily,” said Ron Hook, Western Buchanan County Commissioner. “We get people that (are) either along that area or people that live in other parts of the county that drive that area and just see a lot of trash laying along roadsides.”

For general trash pick up in Buchanan County, county government employees assist, along with the sheriff’s office’s inmate clean-up crew as well.

Hook said they will sometimes receive calls about trash from the same county residents.

“We do. And we don’t discourage it,” he said. “In fact, we ask them to because they’re the best eyes for us out there, as far as trash goes.”

With its apartment-style residence halls of the kind seen in the background, Benedictine College can currently support about 75% of its student body. The rest must find some other place to live, a situation both the college and some residents aren’t keen to sustain. A new 112-bed unit is under construction.

Interim City Manager Justin Pregont speaks about the competitive local housing market from his office in Atchison, Kansas. For cultural and economic reasons, students are a welcome presence in the small town, but space is an issue.

Some collegiate campuses have more students enrolled than ever before, but where there is a need for them to bed down after a hard day of studying — or a night of partying — a place to put that bed might be hard to come by.

According to President Stephen Minnis of Benedictine College in Atchison, Kansas, when the pandemic first arrived, warnings of an exodus from campuses circulated throughout the national community of higher education. In a world of social distancing, lockdowns, mask-wearing and other COVID-19 realities, the fear was that families would opt to bring their students home to weather the storm. Mere months later, Benedictine shattered a school record for enrollment, with the headcount surpassing 2,000 for the first time.

“Pleasant surprise” would be an understatement, before the reality dawned that the campus only has enough living space for about 75% of those enrolled. This has now inspired the construction of a new residence hall on the northwest fringe of the campus, which will add 122 beds upon completion. Further developments are envisioned.

“We have 2,000 students, 1,500 beds, that means we have 500 people living out in the community, which is awesome,” Minnis said. “Our kids are great for the community, and I think the community loves having them around.”

So no big deal, they just move off-campus and the problem is solved, right? Atchison’s Interim City Manager Justin Pregont explained how it’s not that simple.

“There’s a crunch because students can’t attend school if they don’t have someplace to live,” he said. “And while Benedictine is very committed to their residential campus, when they enroll more kids, more kids are off-campus. And so they have to find housing out here in the community.”

In recent years, the city has seen a persistent trend wherein — for example — someone who bought a $50,000 home has seen the value of that home nearly double. Over the time they’ve owned it, they were renting out space, to college students for example.

Now the situation has changed. They are incentivized to sell, and the stock of available rooms in suitable condition has collapsed. What is left behind are, more often than not, blighted properties with structural deficiencies, broken fixtures and poorly maintained roofs, insulation and/or heating/air conditioning. For all renters, the Atchison government has struggled to try to reduce this problem for years. The growing demand for student housing just puts an onus on the problem.

“I’m sure there are some students in, I would certainly say, that are in housing that’s not suitable to be occupied,” Pregont said. “I hope that’s not, that they’re not any imminent danger or anything like that. But when you’re going to school, you don’t expect to be in some of the conditions that some of these students have to be in.”

To the extent that housing supply is an issue in other college towns, like Maryville, Missouri, the new reality of higher education greatly reduces it. Although more people — more than 7,800 — are enrolled at Northwest Missouri State University, a healthy chunk of that is all-online. As never before, decisions are made to obtain a college degree without ever living on-campus or off-campus in the surrounding community.

“Much of Northwest’s enrollment growth is the online market, which does not impact the on- or off-campus housing markets, leaving the university with ample housing space,” said Mark Hornickel, Northwest spokesman.

At any rate, Benedictine is difficult to compare to other colleges. To the extent there’s a need to have fewer kids living in Atchison and more living on campus at Benedictine, the college wholeheartedly agrees. In general, to study there, one has to live in the residence halls. There are exceptions, such as for those age 23 or older, or who are married. The idea is to build a culture of leadership, Minnis explained.

“That’s pretty unusual for most colleges around this area, or even around the country,” he said. “So they are required to live on campus every year, all four years unless we don’t have housing for them ... But we lose too many leaders that way, and we want our leaders to be on campus with us.”