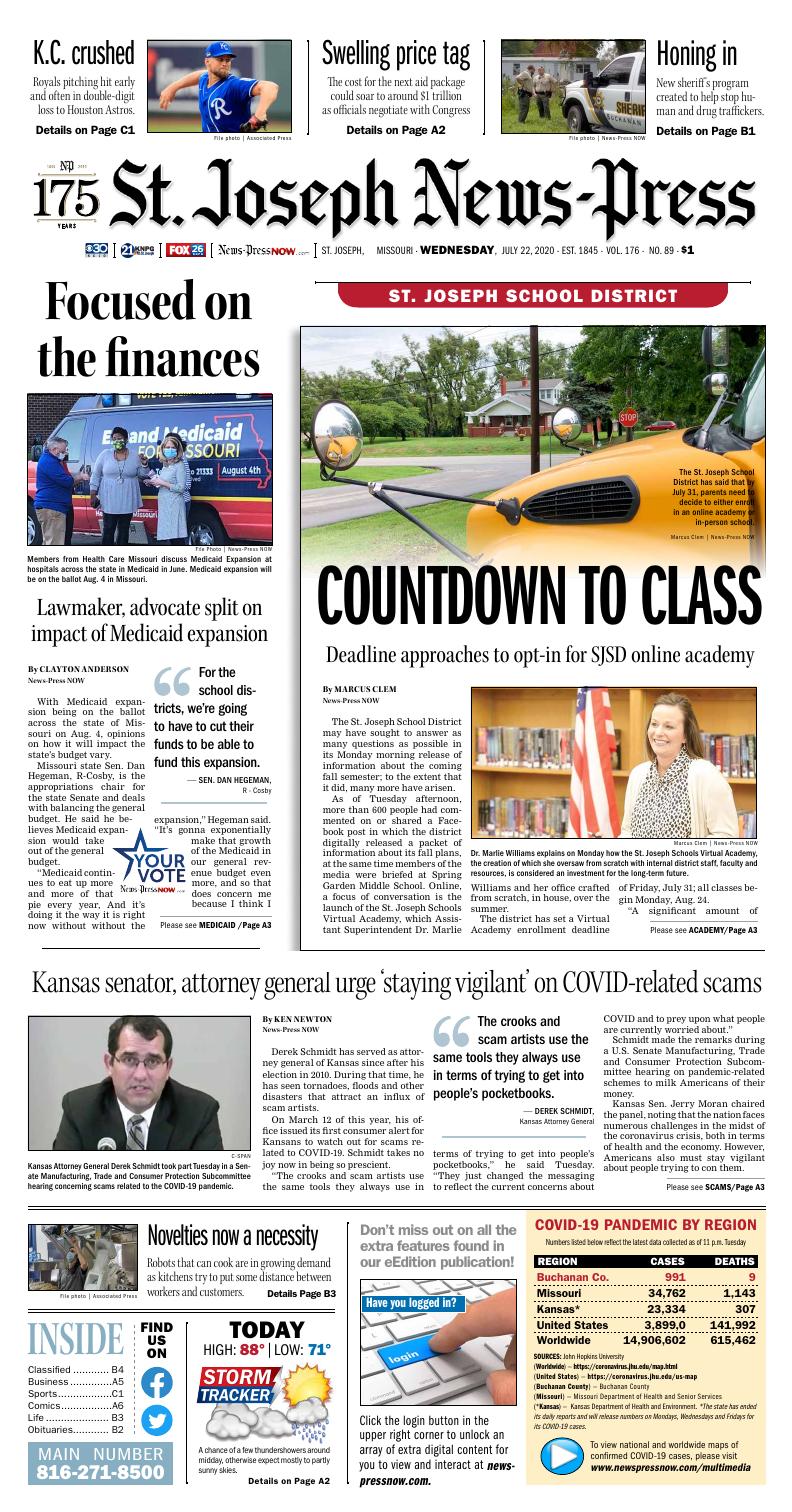 With Medicaid expansion being on the ballot across the state of Missouri on Aug. 4, opinions on how it will impact the state’s budget vary.

“Medicaid continues to eat up more and more of that pie every year, And it’s doing it the way it is right now without without the expansion,” Hegeman said. “It’s gonna exponentially make that growth of the Medicaid in our general revenue budget even more, and so that does concern me because I think I value some of the other services, the basic services that the state provides in the state of Missouri.”

“A study just this spring by Health Management Associates actually looked at three other Midwest states, Ohio, Indiana, and Arkansas, and what it found in those other three Midwest states is that by expanding Medicaid and moving to that 90-10 split, as opposed to the 65-35 that currently is paid by Medicaid, is that actually freed up general revenue dollars for other state priorities like education, and transportation. So this cost savings the Medicaid expansion is going to produce is obviously needed now more than ever,” Jack Cardetti, a spokesman for Yes on 2 said.

Hegeman said he is legitimately worried for areas such as education and public safety to receive budget cuts if Medicaid expansion passes.

“For the school districts, we’re going to have to cut their funds to be able to fund this expansion,” Hegeman said. “That’s pretty difficult because you value public education in the state, and that’s most likely the source of what will have to be tapped into to utilize it.”

The St. Joseph School District has said that by July 31, parents need to decide to either enroll in an online academy or in-person school.

Dr. Marlie Williams explains on Monday how the St. Joseph Schools Virtual Academy, the creation of which she oversaw from scratch with internal district staff, faculty and resources, is considered an investment for the long-term future.

Spring Garden Middle School is ready to accept in-person pupils for the first time since March, but when the first classes begin on Monday, Aug. 24, it remains anyone’s guess as to how many kids will be there.

The St. Joseph School District may have sought to answer as many questions as possible in its Monday morning release of information about the coming fall semester; to the extent that it did, many more have arisen.

As of Tuesday afternoon, more than 600 people had commented on or shared a Facebook post in which the district digitally released a packet of information about its fall plans, at the same time members of the media were briefed at Spring Garden Middle School. Online, a focus of conversation is the launch of the St. Joseph Schools Virtual Academy, which Assistant Superintendent Dr. Marlie Williams and her office crafted from scratch, in house, over the summer.

“A significant amount of work, time, energy, vision and passion has gone into the work over the summer, in creating a group of comprehensive classes; and these have all been designed by our teachers,” Williams said at the media event.

The St. Joseph chapter of the National Education Association, the nation’s largest labor union that represents local teachers, communicated on Tuesday that its own online/return-to-school plan assessment is underway. It intends to comment afterward.

Lydia Bell, a Pickett Elementary School mother, said she laments how the work schedules within her family, as well as the high cost of professional child care, precluded her son’s enrollment in the academy. She is concerned about the potential spread of COVID-19 within school buildings.

The district has made it clear that families, once enrolled in one option or the other, will not be able to change their minds mid-semester, although as with every other part of its reopening plan, this remains subject to alterations. What is most important to Bell is that these rules, if they remain as they are, be made known to the entire community while time remains.

“I personally didn’t receive an email regarding the deadline, and so, I know a lot of people don’t have news, or they don’t have Facebook, so I don’t know if people are aware that there is a deadline,” she said.

Derek Schmidt has served as attorney general of Kansas since after his election in 2010. During that time, he has seen tornadoes, floods and other disasters that attract an influx of scam artists.

On March 12 of this year, his office issued its first consumer alert for Kansans to watch out for scams related to COVID-19. Schmidt takes no joy now in being so prescient.

“The crooks and scam artists use the same tools they always use in terms of trying to get into people’s pocketbooks,” he said Tuesday. “They just changed the messaging to reflect the current concerns about COVID and to prey upon what people are currently worried about.”

Schmidt made the remarks during a U.S. Senate Manufacturing, Trade and Consumer Protection Subcommittee hearing on pandemic-related schemes to milk Americans of their money.

Kansas Sen. Jerry Moran chaired the panel, noting that the nation faces numerous challenges in the midst of the coronavirus crisis, both in terms of health and the economy. However, Americans also must stay vigilant about people trying to con them.

“During this time of national crisis and coordinated recovery, there are fraudsters and scam artists that seek to take advantage of consumers, especially the nation’s most vulnerable communities like that of our nation’s seniors,” the Republican lawmaker said.

The Federal Trade Commission, Moran said, has reported more than 136,000 cases of COVID-related scams totaling about $90 million in fraud losses this year. Consumers in Kansas have reported 500 of those cases amounting to $800,000 in losses.

“These are only the reported cases,” the senator said. “It is safe to assume there are a number of consumer scams that have not been reported to date.”

One of the first scams to emerge, Schmidt said, involved text messages saying the recipient had been in contact with someone who tested positive for the virus. A link then directed the person to a fraudulent website that sought personal information.

Other types of scams, according to the attorney general, include:

Sales of products claiming to help keep a person from contracting the virus.

Sales of personal protective equipment, like masks, either ineffective or stolen.

Callers posing as government officials, such as from the Small Business Administration, offering assistance with loans or unemployment benefits.

Use of stolen identities to file claims for government services.

Schmidt, who testified by video link from his office in Topeka to the hearing room on Capitol Hill, told the story of one individual already being sued by the attorney general’s office for providing private autopsy and forensic services without being a physician or qualified as a pathologist.

Though the court prohibited him from this in Kansas, the defendant began traveling to other states.

“We received information after the pandemic erupted into the public consciousness that our enjoined defendant had set up some new companies and was peddling essentially the same services, although in a new package, outside of Kansas,” Schmidt said.

An expanded restraining order stopped this.

Sen. Richard Blumenthal, the top Democrat on the subcommittee and a former attorney general in Connecticut, said such schemes inevitably arise with new disaster.

“There are always bottom feeders and con artists who exploit people’s fears and hopes,” he said. “They have defied both science and common decency in taking advantage of people financially.” 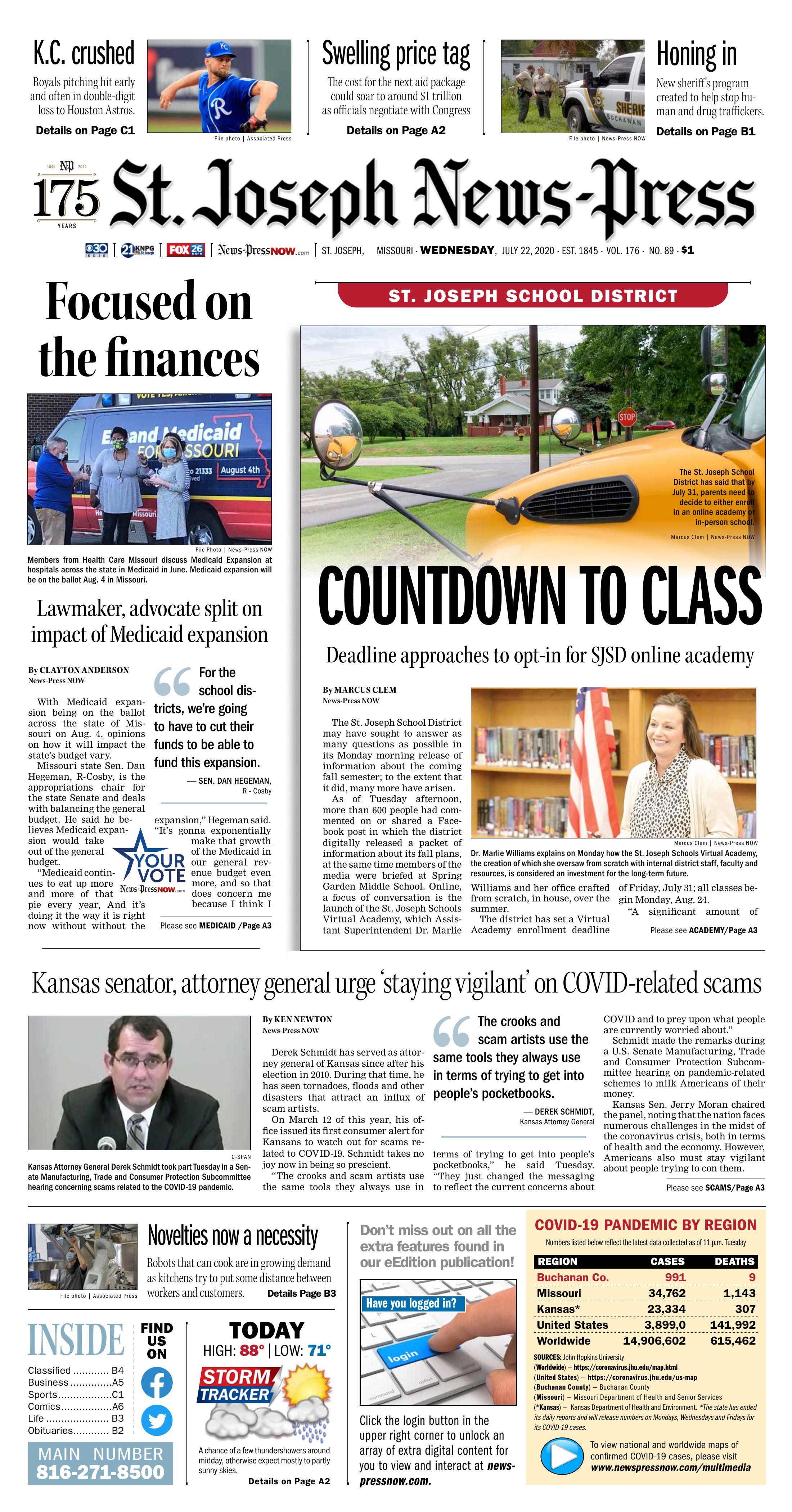