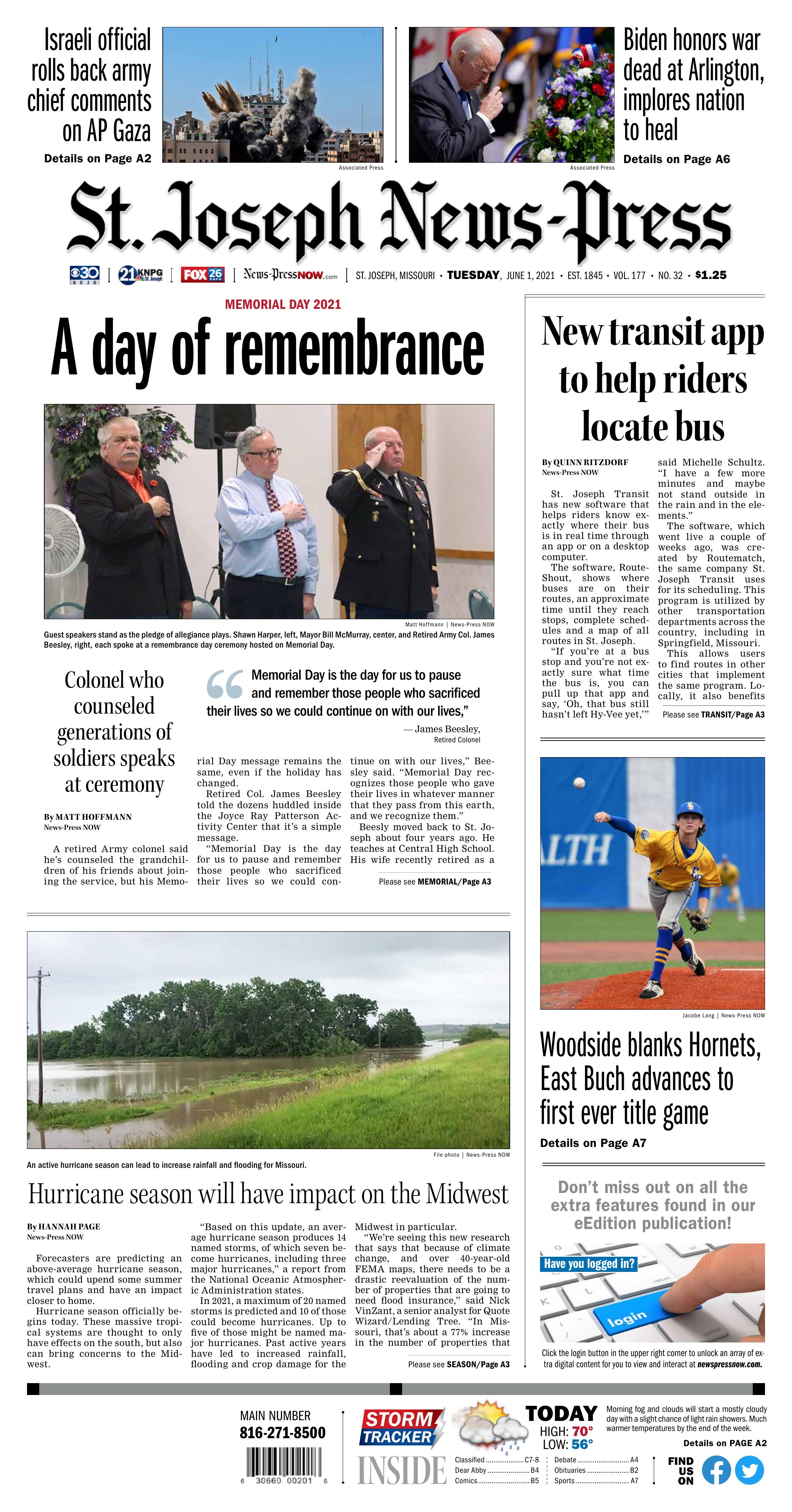 A retired Army colonel said he’s counseled the grandchildren of his friends about joining the service, but his Memorial Day message remains the same, even if the holiday has changed.

Beesly moved back to St. Joseph about four years ago. He teaches at Central High School. His wife recently retired as a JROTC instructor at Lafayette High School.

In a sometimes emotional speech, Beesly said he remembers friends lost in the Korean and Gulf wars. Some of his family members survived World War II.

His son’s team leader died in Afghanistan. In many ways, Beesly’s story embodies the holiday those in attendance gathered to celebrate Monday.

“There’s a lot of emotion involved. And I’m so very fortunate to have survived the conflicts that I’ve been in when other people weren’t as fortunate,” Beesly said. “Sometimes, they’re just at the wrong place at the wrong time.”

As Beesly told the crowd, his grandmother, born in the 19th century, still calls it “decoration day.”

“It was a time to remember those people who had been in the Civil War,” Beesly said. “So for her, it was much more immediate that someone who’s just reading about it.”

Tragically, today’s generations haven’t had a time without conflict, Beesly said, leaving a lot of soldiers to keep in hearts and minds.

“I’m literally teaching the grandchildren of people I went to high school with, it’s amazing,” Beesly said. “It’s a lot of fun to be able to connect with those children and my friends.”

St. Joseph Transit has a new app to help riders know where their bus is in real time.

St. Joseph Transit has new software that helps riders know exactly where their bus is in real time through an app or on a desktop computer.

The software, RouteShout, shows where buses are on their routes, an approximate time until they reach stops, complete schedules and a map of all routes in St. Joseph.

“If you’re at a bus stop and you’re not exactly sure what time the bus is, you can pull up that app and say, ‘Oh, that bus still hasn’t left Hy-Vee yet,’” said Michelle Schultz. “I have a few more minutes and maybe not stand outside in the rain and in the elements.”

The software, which went live a couple of weeks ago, was created by Routematch, the same company St. Joseph Transit uses for its scheduling. This program is utilized by other transportation departments across the country, including in Springfield, Missouri.

This allows users to find routes in other cities that implement the same program. Locally, it also benefits transit dispatchers.

“It’s more of a case of people will call into our dispatch and ask them, ‘Where’s my bus? Where’s my bus?’ People just wanted to judge their time a little bit better,” Schultz said. “It is as helpful for our dispatchers as it is for the public, so they can have a quick glance to see exactly where that bus is at.”

The software is still new for St. Joseph Transit, so there are some glitches. Officials are trying to fix any complications, so if users experience any issues, they should contact the transit department at 816-233-6700.

The app is free to use and can be downloaded at www.routeshout.com/.

An active hurricane season can lead to increase rainfall and flooding for Missouri.

Forecasters are predicting an above-average hurricane season, which could upend some summer travel plans and have an impact closer to home.

Hurricane season officially begins today. These massive tropical systems are thought to only have effects on the south, but also can bring concerns to the Midwest.

“Based on this update, an average hurricane season produces 14 named storms, of which seven become hurricanes, including three major hurricanes,” a report from the National Oceanic Atmospheric Administration states.

In 2021, a maximum of 20 named storms is predicted and 10 of those could become hurricanes. Up to five of those might be named major hurricanes. Past active years have led to increased rainfall, flooding and crop damage for the Midwest in particular.

“We’re seeing this new research that says that because of climate change, and over 40-year-old FEMA maps, there needs to be a drastic reevaluation of the number of properties that are going to need flood insurance,” said Nick VinZant, a senior analyst for Quote Wizard/Lending Tree. “In Missouri, that’s about a 77% increase in the number of properties that will need flood insurance moving forward.”

FEMA is getting ready to put out new rules regarding flooding insurance and risk factors for policyholders.

“Now FEMA has listed 157,000 properties that need flood insurance, and new research indicates that number should actually be around 280,000 properties,” VinZant said. “For new policyholders, this would go into effect on Oct. 1, 2021, and April 1, 2022, for existing policies.”

Premium coverage prices are expected to rise when more properties are added in flood-prone areas.

Hurricanes also take a toll on the economy when oil rigs are affected. Gas prices often take the biggest hit. Gas prices already are expected to spike up to 34%, according to the Environmental Protection Agency.

While the weather remains unpredictable, there are a few tips that both the city and county emergency management departments want to remind people of ahead of peak severe weather season.

“It’s recommended to have supplies in your emergency kit to hold you over for 72 to 96 hours,” Buchanan County Emergency Eanager Bill Brinton said. “In the kit, there should be food, water, flashlights and any medicines.”

Other things people may not think of should be included, as well.

“Cash is good to have in case credit card machines are not available,” said Bill Lamar, St. Joseph emergency manager. “I know people like to keep items ready to go in a garage or basement.”

Make sure to have a family plan in case you are not home during an event or end up getting displaced after a tornado or flood.

“What I try to tell everybody is to make sure, if they have a smartphone, ... to have the weather apps available,’’ Lamar hurricane season. “The city folks can download and subscribe to Nixle alerts.”

Nixle is a free communication that will send out alerts directly to your phone the instant a warning is issued.

“Knowing what’s coming is half the battle,” Lamar said.