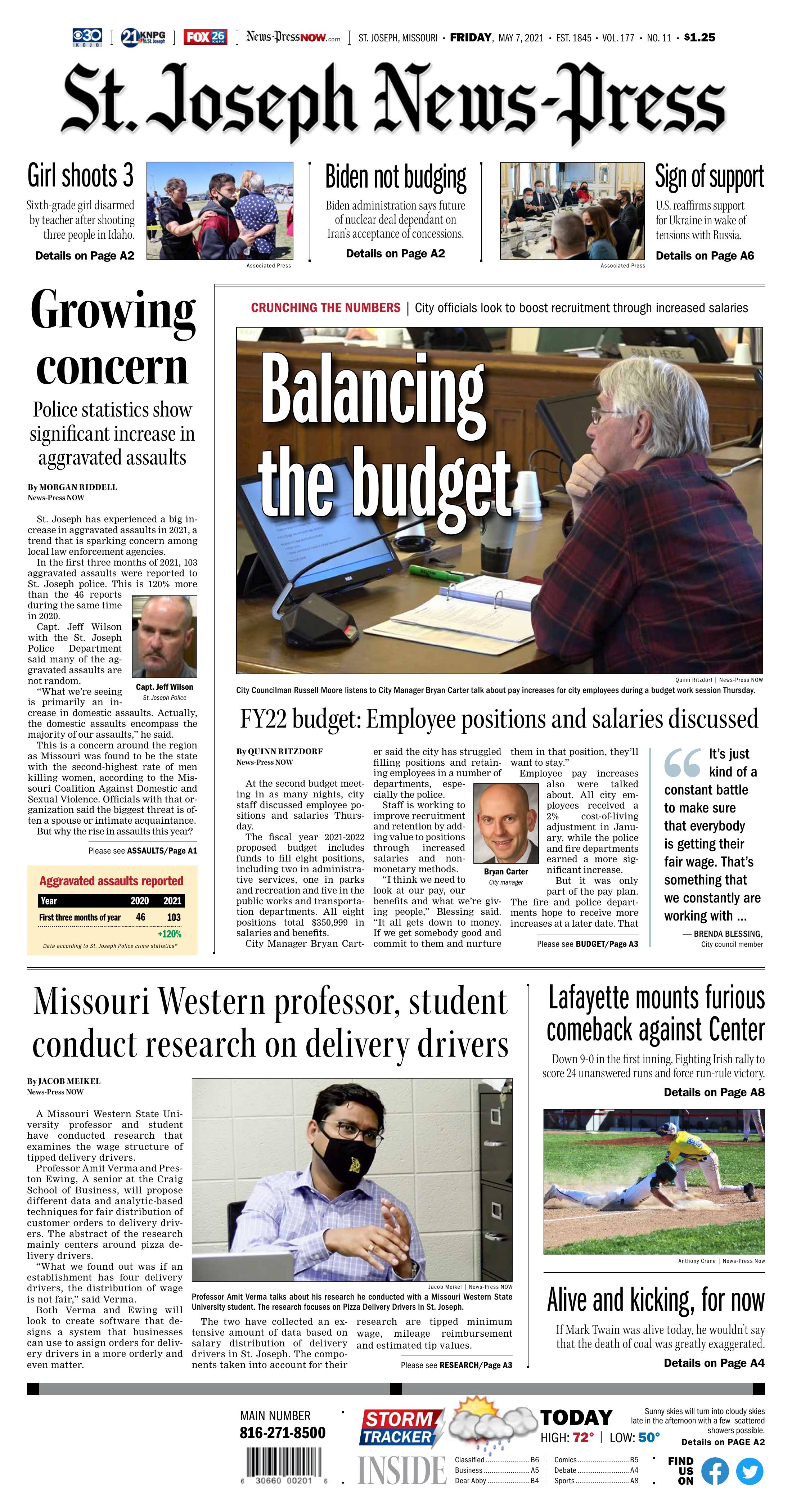 At the second budget meeting in as many nights, city staff discussed employee positions and salaries Thursday.

The fiscal year 2021-2022 proposed budget includes funds to fill eight positions, including two in administrative services, one in parks and recreation and five in the public works and transportation departments. All eight positions total $350,999 in salaries and benefits.

City Manager Bryan Carter said the city has struggled filling positions and retaining employees in a number of departments, especially the police.

Staff is working to improve recruitment and retention by adding value to positions through increased salaries and non-monetary methods.

“I think we need to look at our pay, our benefits and what we’re giving people,” Blessing said. “It all gets down to money. If we get somebody good and commit to them and nurture them in that position, they’ll want to stay.”

Employee pay increases also were talked about. All city employees received a 2% cost-of-living adjustment in January, while the police and fire departments earned a more significant increase.

But it was only part of the pay plan. The fire and police departments hope to receive more increases at a later date. That may or may not happen in fiscal year 2022, as the budget doesn’t include wage adjustments. However, the city will revisit raises around November.

“It’s just kind of a constant battle to make sure that everybody is getting their fair wage,” Blessing said. “That’s something that we constantly are working with and making promises and trying to keep those promises.”

During the last half of the meeting, a couple department directors talked about their individual budgets, including not having enough staff.

“It’s a real concern with departments coming up that have maybe a half position and they need a full position,” Blessing said. “We need to find that and try to help them out.”

A couple more budget meetings are planned for next week.

Details regarding the individual department budgets discussed during the meeting are below:

These funds mostly cover conferences and training activities. Mayor Bill McMurray said this budget likely will be amended and raised to give the next council enough funds to cover training.

This budget is more than usual due to $80,000 of expenses for the primary and general city council elections next spring.

The city council also discussed adding a position or increasing a part-time employee to full time to help Paula Heyde, the city clerk.

This department will be saving about $4,000 by changing to a different legal search engine.

This department plans on saving about $300,000 by not covering the costs of credit card fees. This went into effect this year, and those costs have been placed on the customer.

Tom Mahoney, the director of administrative services, said the department is short staffed. The city is looking to fill an assistant director and an accountant position to address that.

This budget slightly increased compared to last year due to multiple programs to address vacant and blighted properties.

The department decreased the amount to the Land Bank, because funds have rolled over as the board has had limited costs the past couple of years.

Clint Thompson, the director of planning and community development, said property maintenance is short staffed and relies on temporary labor.

This department will save about $31,000 as it eliminates two positions. It also plans to buy a new payroll software.

Professor Amit Verma talks about his research he conducted with a Missouri Western State University student. The research focuses on Pizza Delivery Drivers in St. Joseph.

A Missouri Western State University professor and student have conducted research that examines the wage structure of tipped delivery drivers.

Professor Amit Verma and Preston Ewing, A senior at the Craig School of Business, will propose different data and analytic-based techniques for fair distribution of customer orders to delivery drivers. The abstract of the research mainly centers around pizza delivery drivers.

“What we found out was if an establishment has four delivery drivers, the distribution of wage is not fair,” said Verma.

Both Verma and Ewing will look to create software that designs a system that businesses can use to assign orders for delivery drivers in a more orderly and even matter.

The two have collected an extensive amount of data based on salary distribution of delivery drivers in St. Joseph. The components taken into account for their research are tipped minimum wage, mileage reimbursement and estimated tip values.

“In my area of research, I work with routing,” said Verma. “In the field of routing, your typical objective is how do I minimize cost? In that sense, this is a different problem altogether because we are not worried about minimizing cost, we’re trying to create fair routes.”

The basic version of the software the two are designing is almost completed. From there, they will look to receive feedback in which they can tweak the software and create a full version in order to share with companies who wish to utilize the system they have designed.

St. Joseph has experienced a big increase in aggravated assaults in 2021, a trend that is sparking concern among local law enforcement agencies.

Capt. Jeff Wilson with the St. Joseph Police Department said many of the aggravated assaults are not random.

This is a concern around the region as Missouri was found to be the state with the second-highest rate of men killing women, according to the Missouri Coalition Against Domestic and Sexual Violence. Officials with that organization said the biggest threat is often a spouse or intimate acquaintance.

But why the rise in assaults this year?

“That’s the million-dollar question. That’s the question that as officers, investigators, YWCA personnel, victim advocates, all of us wish that we had the answer to,” Wilson said. “There’s substance abuse, there are emotional problems that need to be treated and the list goes on and on and on. We see all of that when we’re looking into these things.”

As law enforcement and advocates work to help those who are reporting such crimes, they ask that victims continue reaching out.

“Report, report, report. Keep calling us,” Wilson said. “If you are a victim of domestic violence, please reach out to somebody, us, a good friend, a hotline, whatever you need to do reach out. Do not be a victim in this. Let us know you need help so we can get you in that right direction.”

Missouri Coalition Against Domestic and Sexual Violence has many resources around the state and Northwest Missouri. Locally, the YWCA works very closely with them, local law enforcement and the prosecutor’s office.

Assault On The Rise