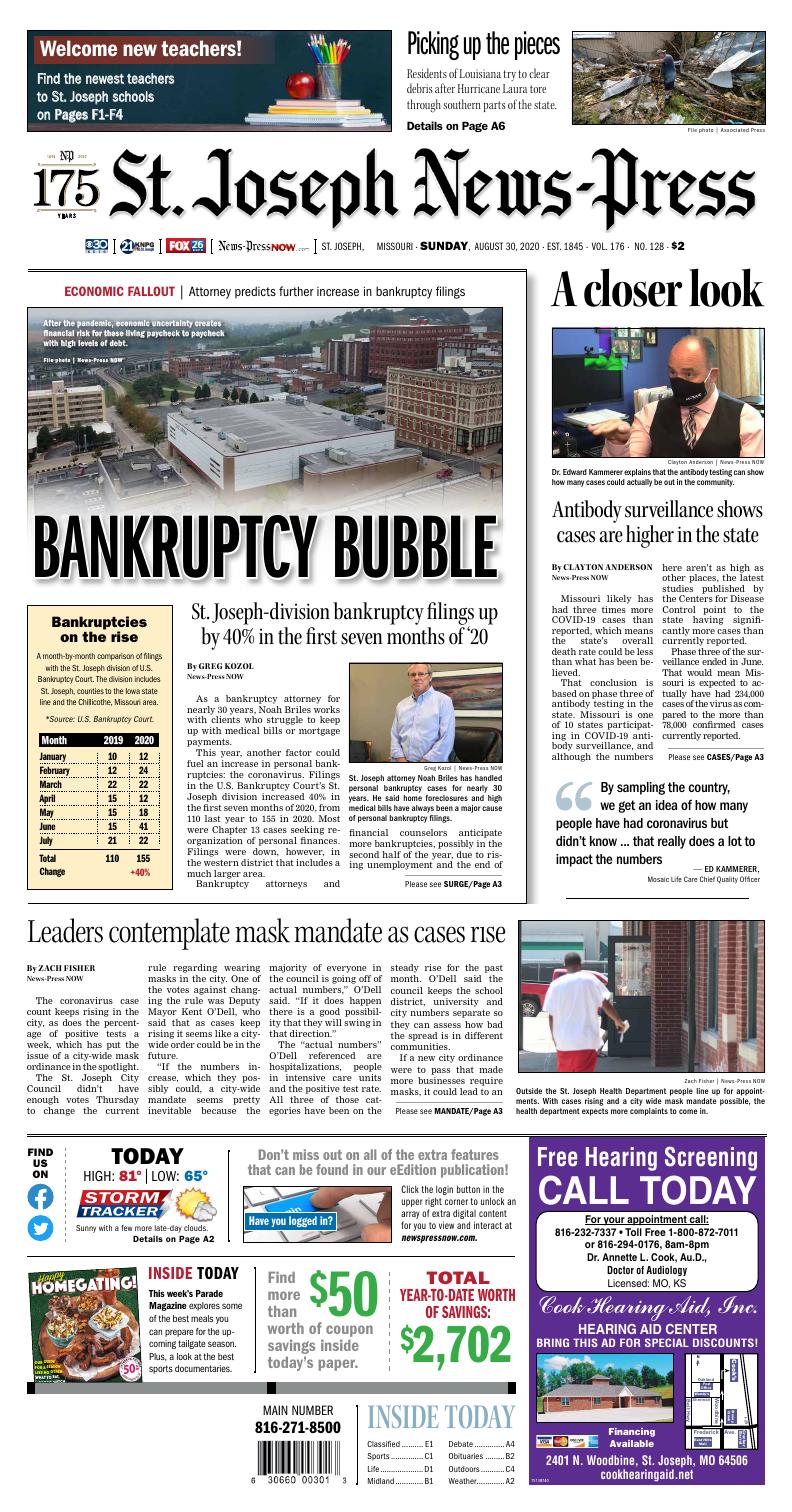 As a bankruptcy attorney for nearly 30 years, Noah Briles works with clients who struggle to keep up with medical bills or mortgage payments.

This year, another factor could fuel an increase in personal bankruptcies: the coronavirus. Filings in the U.S. Bankruptcy Court’s St. Joseph division increased 40% in the first seven months of 2020, from 110 last year to 155 in 2020. Most were Chapter 13 cases seeking reorganization of personal finances. Filings were down, however, in the western district that includes a much larger area.

Bankruptcy attorneys and financial counselors anticipate more bankruptcies, possibly in the second half of the year, due to rising unemployment and the end of relief measures designed to blunt the pandemic’s economic damage.

“Some of these things take a little while to hit,” Briles said. “People don’t immediately think of filing for bankruptcy. I think it’s eventually going to catch up for a lot of these people who have been out of work and are falling behind on mortgages and other payments.”

Heading into 2020, a booming economy might have masked the precarious financial position of some households. On the eve of pandemic, the Federal Reserve Bank of New York reported total U.S. household debt of $14.3 trillion, more than the previous high mark prior to the 2008 economic collapse. A separate Harris Poll found that just more than half of American adults don’t keep a household budget and 14% have more than $2,500 in credit card debt.

After the pandemic, economic uncertainty creates financial risk for those living paycheck to paycheck with high levels of debt.

“I think we are on the precipice of a major wave of insolvency,” said Bruce McClary, vice president of communications for the National Foundation for Credit Counseling. The organization provides information and links to nonprofit credit counseling for individuals who are considering bankruptcy or going through the process.

“There is going to be a bankruptcy bubble,” he said. “We need to be prepared for what will happen.”

The size of that bubble may depend on whether coronavirus relief measures like increased unemployment insurance benefits are extended. More than 4 in 10 of Missouri’s households include someone who lost employment income during the pandemic, according to Empower Missouri, an advocacy group for low-income Missourians.

“The common thought is there is going to be a rush of cases filed once the federal stimulus package stops,” said Todd Griffee, another bankruptcy attorney in St. Joseph. “People, we think, have been living off credit card debt for necessities like food and clothing.”

Briles said many of the consumer relief measures at the height of the pandemic granted moratoriums on making payments on utility bills, rent or mortgages. But they didn’t extend the loan or modify the terms, even if the consumer is behind on payments. That means the bill, quite possibly a big one, is about to come due.

“It’s kind of kicking the can down the road a little bit,” Briles said. “Unfortunately, it can seem worse than ever when you finally get to the end of that road.”

Briles has seen spikes in bankruptcies before, most recently immediately following the 2008 recession. Bankruptcy filings can track home foreclosures closely, with debtors seeking Chapter 13 restructuring in order to hold on to a house. The mortgage analytics company CoreLogic found that 7% of home mortgages were delinquent in May, the highest rate since 2014.

The rates of foreclosures and delinquencies can vary from market to market, but many homeowners are experiencing similar pressures.

“Whether it’s three months from now or six months from now, I think it’s going to catch up with people who are out of work and falling behind on mortgages and other payments,” Briles said.

Griffee said bankruptcies are cyclical, meaning that a significant surge in filings might not happen until spring, which tends to be the busy season.

“Filings are up substantially in March, April and May,” he said. “People are getting their tax refunds back and recovering from Christmas.”

Bankruptcies on the rise

A month-by-month comparison of filings with the St. Joseph division of U.S. Bankruptcy Court. The division includes St. Joseph and counties to the Iowa state line and the Chillicothe, Missouri area.

Dr. Edward Kammerer explains that the antibody testing can show how many cases could actually be out in the community.

After doing some quick math, Dr. Edward Kammerer showcases that around 3.6 million Missourians would have to had been exposed to COVID-19 to reach herd immunity.

Missouri likely has had three times more COVID-19 cases than reported, which means the state’s overall death rate could be less than what has been believed.

That conclusion is based on phase three of antibody testing in the state. Missouri is one of 10 states participating in COVID-19 antibody surveillance, and although the numbers here aren’t as high as other places, the latest studies published by the Centers for Disease Control point to the state having significantly more cases than currently reported.

Phase three of the surveillance ended in June. That would mean Missouri is expected to actually have had 234,000 cases of the virus as compared to the more than 78,000 confirmed cases currently reported.

The study in three phases showed round one had at least 24 times the number of reported cases and round two showed 13 times the actual number. In Missouri, as more antibody testing was done, the estimate has gone down quite a bit, however.

Dr. Edward Kammerer, chief quality officer for Mosaic Life Care, has been taking the results of antibody testing in Buchanan County. He said the sampling is designed to give an idea of the spread of the virus and how close certain areas are to herd immunity.

“By sampling the country, we get an idea of how many people have had coronavirus but didn’t know it or didn’t at least seek care to get a positive swab, and that really does a lot to impact the numbers,” Kammerer said.

While Missouri’s numbers are not as high as in other states, Kammerer said people have been doing a good job fighting the pandemic, evidenced by the death toll and hospitalizations being down.

“I think there is reason for hope and optimism — this is not the big boogeyman, it’s not the nightmare we once thought it was going to be,” Kammerer said.

Kammerer said Mosaic has good treatments, support care and methods to reduce community spread, which would reduce the likelihood of the virus becoming a more permanent issue.

Buchanan County antibody testing results for the 2,500 samples taken here should be made available in the upcoming weeks, but as of now it appears like the community has not had as big of a jump in infection rates.

“My suspicion is that our penetrance, our number of people who have had it and don’t realize they’ve had it, is lower in this community,” Kammerer said. “I think we’ve done a great job in St. Joseph and have been actually socially isolating, we’ve been wearing our masks reasonably well.”

Kammerer said he expects a vaccine to be fully available in around eight months, and it should come before the community is close to reaching herd immunity. He said that in order to reach herd immunity, the infection rate must reach 60%. According to his estimates, Buchanan County is at around 7%.

Kammerer said Missouri would have to have about 3.6 million people infected with the virus in order to get to herd immunity.

Outside the St. Joseph Health Department people line up for appointments. With cases rising and a city wide mask mandate possible, the health department expects more complaints to come in.

The coronavirus case count keeps rising in the city, as does the percentage of positive tests a week, which has put the issue of a city-wide mask ordinance in the spotlight.

The St. Joseph City Council didn’t have enough votes Thursday to change the current rule regarding wearing masks in the city. One of the votes against changing the rule was Deputy Mayor Kent O’Dell, who said that as cases keep rising it seems like a citywide order could be in the future.

“If the numbers increase, which they possibly could, a city-wide mandate seems pretty inevitable because the majority of everyone in the council is going off of actual numbers,” O’Dell said. “If it does happen there is a good possibility that they will swing in that direction.”

The “actual numbers” O’Dell referenced are hospitalizations, people in intensive care units and the positive test rate. All three of those categories have been on the steady rise for the past month. O’Dell said the council keeps the school district, university and city numbers separate so they can assess how bad the spread is in different communities.

If a new city ordinance were to pass that made more businesses require masks, it could lead to an uptick of complaints filed with the St. Joseph Health Department.

The department has been in charge of dealing with businesses not complying with city ordinance. According to Director Debra Bradley, the complaint number would rise if a citywide mandate is implemented.

“I believe the complaints will pick up but I think that the three (employees) that we have right now manage it and do a great job,” Bradley said.

Bradley said that there have been a couple of businesses that routinely had complaints, but for the most part every business and every person is doing what they need to do. Staff members would not need to be added for a possible heavier workload of complaints as it has been manageable so far.

When a complaint is filed, the business or property receives a visit from an environmental health specialist explaining why they need to follow the order. If the individual or company still does not comply, a letter is sent making them aware of the issue. From there the person can be recommended to municipal court for a summons.

But if there is someone in a business who refuses to follow the rules, the police department could be called to remove the individual. This has not had to happen in town yet, officials said.

“Honestly we aren’t experiencing a problem at this point. Not to say we won’t in the future, but we have not had a problem with businesses at this point,” St. Joseph Police Department Capt. Jeff Wilson said. Wilson did acknowledge that police do receive calls about complaints but nothing that has been too serious.

And if a more extensive ordinance is passed, it would not mean more strict penalties for the non-compliant.

“We won’t extend ourselves to arresting people,” O’Dell said. “You won’t be arrested for not wearing a mask.”

The council meets this Thursday to decide on a mask order once again. 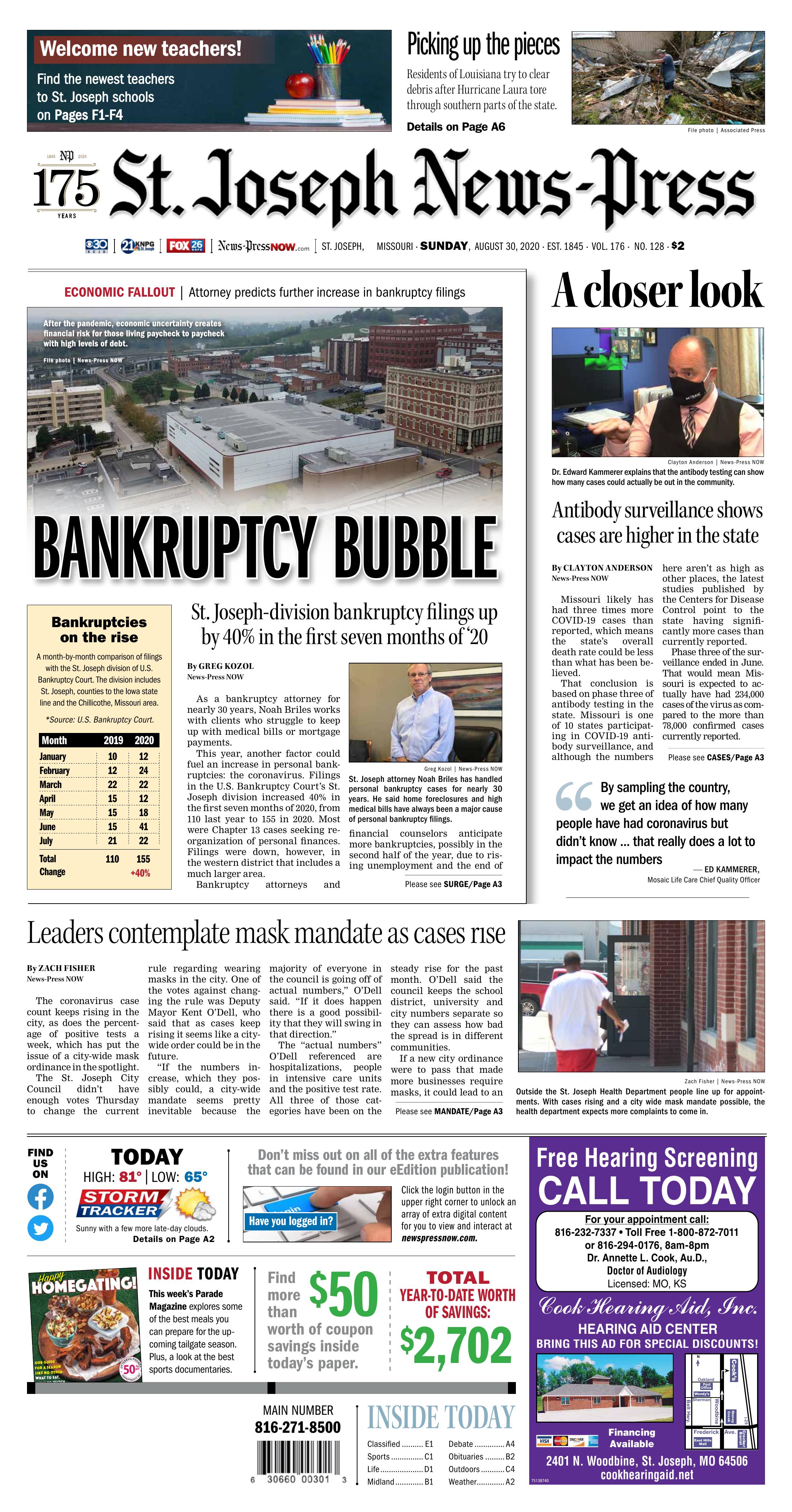