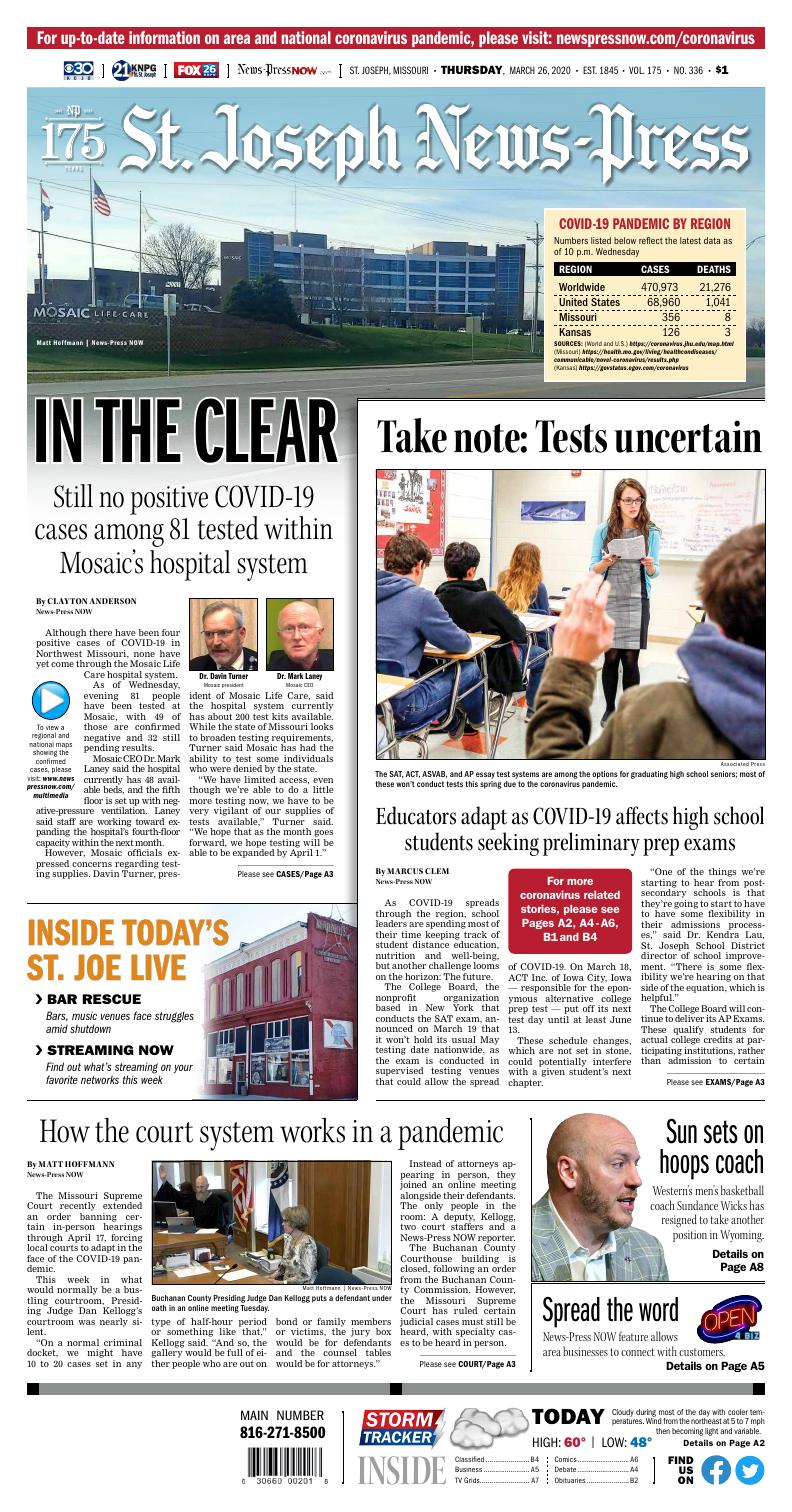 A teacher assists a student in taking the SAT test in January.

The SAT, ACT, ASVAB, and AP essay test systems are among the options for graduating high school seniors; most of these won’t conduct tests this spring due to the coronavirus pandemic.

As COVID-19 spreads through the region, school leaders are spending most of their time keeping track of student distance education, nutrition and well-being, but another challenge looms on the horizon: The future.

The College Board, the nonprofit organization based in New York that conducts the SAT exam, announced on March 19 that it won’t hold its usual May testing date nationwide, as the exam is conducted in supervised testing venues that could allow the spread of COVID-19. On March 18, ACT Inc. of Iowa City, Iowa — responsible for the eponymous alternative college prep test — put off its next test day until at least June 13.

These schedule changes, which are not set in stone, could potentially interfere with a given student’s next chapter.

“One of the things we’re starting to hear from post-secondary schools is that they’re going to start to have to have some flexibility in their admissions processes,” said Dr. Kendra Lau, St. Joseph School District director of school improvement. “There is some flexibility we’re hearing on that side of the equation, which is helpful.”

The College Board will continue to deliver its AP Exams. These qualify students for actual college credits at participating institutions, rather than admission to certain schools, although AP Exam results often are cited in college applications. Because these rely on student essays and other forms of substantial, original written input on a timed basis, remote testing sessions conducted online are considered practical, without a high risk of cheating.

According to Lau, essentially all graduating seniors — roughly 800 students out of the total student body just under 10,800 — use some form of college preparatory exam or submission process. The district supplies resources for students to prepare for these exams, but considers them a “self-selected” group, in that students choose one or more preparatory pathways to follow.

Particularly for those students preparing for military service or other government work, the Armed Services Vocational Aptitude Battery is an available alternative, and produces an SAT-like score. The U.S. Department of Defense conducts the ASVAB at a number of venues, such as Military Entrance Processing Stations, at no cost, and students can elect to take the test without the results being shared with military recruiters. No changes have yet been announced for ASVAB test-takers.

Lau is confident the situation will shake out in the course of time and that students will be able to take the tests they need to take. Right now, the district is focusing on encouraging students to respond to the immediate threat of COVID-19.

“I certainly think this situation is unprecedented. I think it’s uncharted waters,” she said. “Right now, testing is not the primary concern. The primary concern is the safety of the students and of our testing staff. That’s the tip of the spear ... from my lens and my particular position.

“I think it’s wise; (testing) is not something we are considering as important as we typically do this time of year. We have a lot of really serious concerns that we’re addressing, and those are the reasons we’re not in school right now.”

The Missouri Supreme Court recently extended an order banning certain in-person hearings through April 17, forcing local courts to adapt in the face of the COVID-19 pandemic.

This week in what would normally be a bustling courtroom, Presiding Judge Dan Kellogg’s courtroom was nearly silent.

“On a normal criminal docket, we might have 10 to 20 cases set in any type of half-hour period or something like that,” Kellogg said. “And so, the gallery would be full of either people who are out on bond or family members or victims, the jury box would be for defendants and the counsel tables would be for attorneys.”

Instead of attorneys appearing in person, they joined an online meeting alongside their defendants. The only people in the room: A deputy, Kellogg, two court staffers and a News-Press NOW reporter.

In order to access the courthouse, patrons need to call the office they have business with.

“We tried to make clear that the courts are going on regardless of this. There are certain cases, however, that we are not doing in person at all,” Kellogg said.

Proceedings that must still occur in person include protection orders, cases involving COVID-19 and emergency health orders. The full list of exempt proceedings can be found on the Missouri Supreme Court’s website.

The court’s order also suspended any local rules that would prohibit technology to be used in the courtroom by judges. Even if hearings are held in person, the court ruled they can be held without spectators.

Mosaic Life Care is eliminating positions due to COVID-19.

Although there have been four positive cases of COVID-19 in Northwest Missouri, none have yet come through the Mosaic Life Care hospital system.

As of Wednesday, evening 81 people have been tested at Mosaic, with 49 of those are confirmed negative and 32 still pending results.

Mosaic CEO Dr. Mark Laney said the hospital currently has 48 available beds, and the fifth floor is set up with negative-pressure ventilation. Laney said staff are working toward expanding the hospital’s fourth-floor capacity within the next month.

However, Mosaic officials expressed concerns regarding testing supplies. Davin Turner, president of Mosaic Life Care, said the hospital system currently has about 200 test kits available. While the state of Missouri looks to broaden testing requirements, Turner said Mosaic has had the ability to test some individuals who were denied by the state.

“We have limited access, even though we’re able to do a little more testing now, we have to be very vigilant of our supplies of tests available,” Turner said. “We hope that as the month goes forward, we hope testing will be able to be expanded by April 1.”

Laney said the hospital’s supply chain with regard to protective equipment is adequate.

The hospital currently is screening visitors by asking symptom questions and taking their temperature. Visitors also have been limited to one per patient. This is what is considered tier three out of a possible six levels the hospital can take. Officials are taking these precautions due to a positive case within the hospital’s coverage area, although that case did not come through a Mosaic hospital.

So far positive COVID-19 cases have been reported in Clinton and Platte counties in Northwest Missouri. Also, a prisoner who had been first in Cameron’s Western Missouri Correctional Center before being moved to St. Joseph’s Western Reception, Diagnostic and Correctional Center tested positive at a Kansas City area hospital after being taken there. Additionally, a positive case has been reported in Doniphan County, Kansas.

Missouri now has 356 confirmed cases of COVID-19, up from 255 yesterday, according to the Missouri Department of Health & Senior Services. It is an increase of 39.6%. 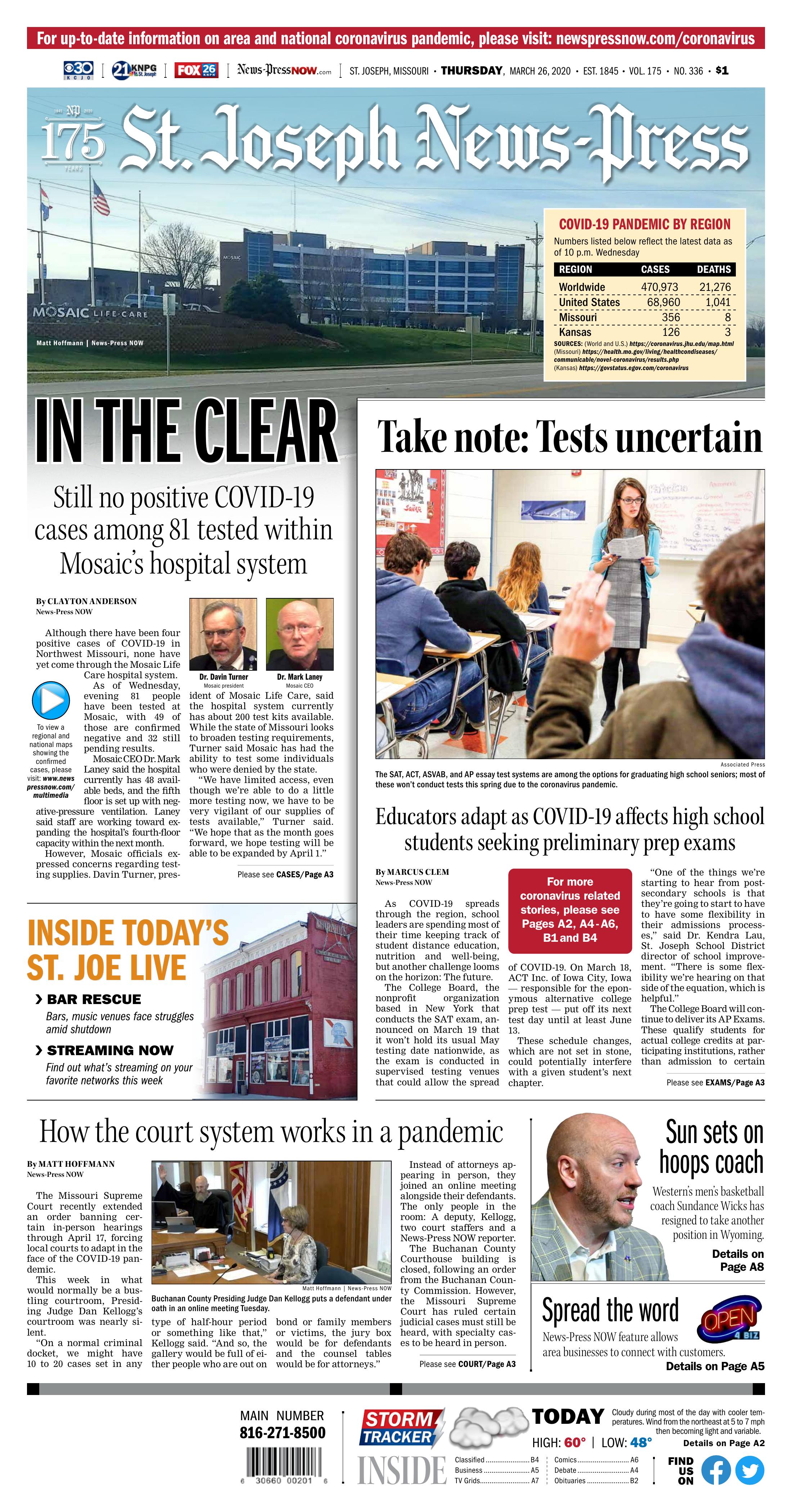