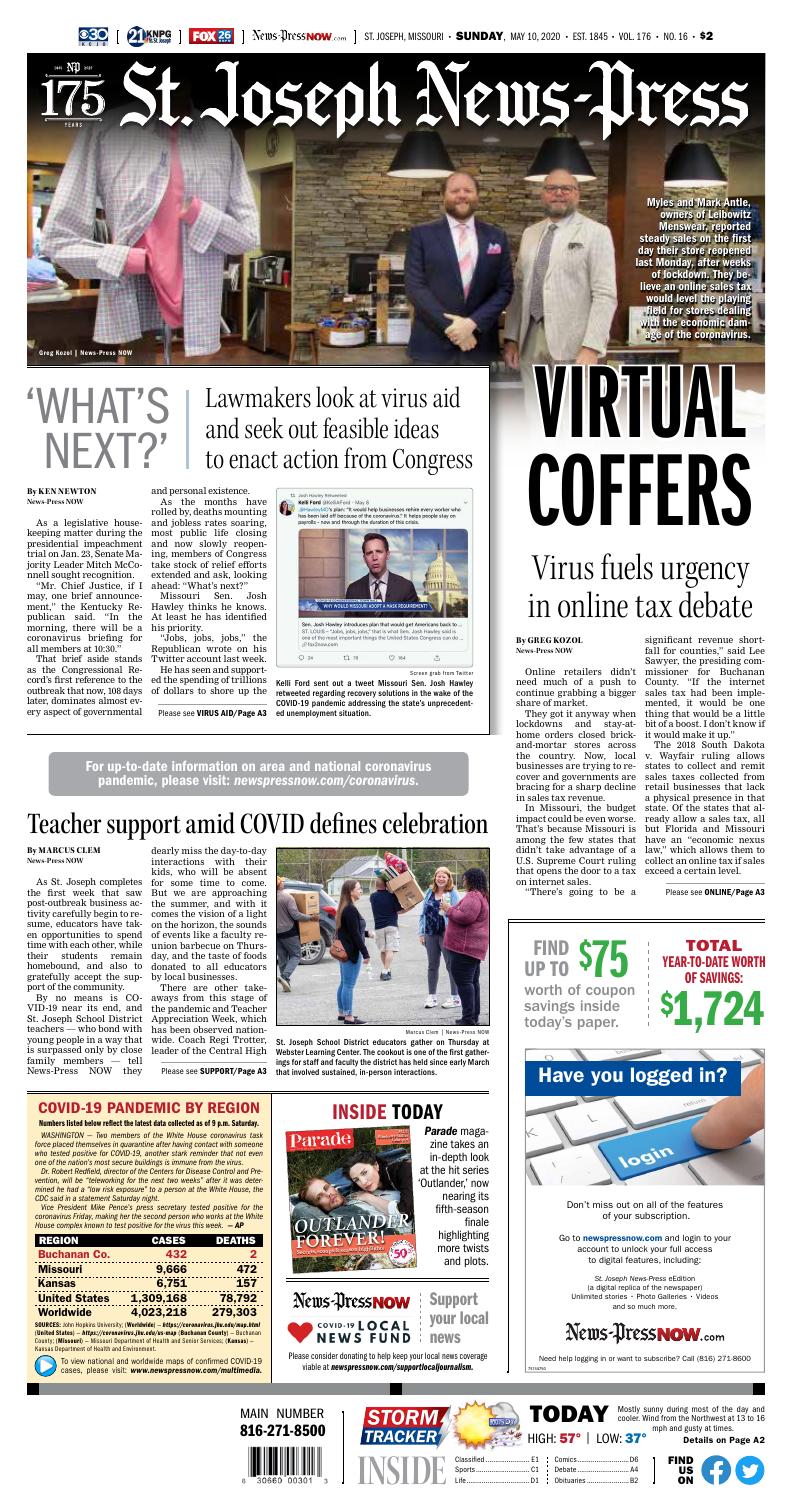 Myles and Mark Antle, owners of Leibowitz Menswear, reported steady sales on the first day their store reopened last Monday, after weeks of lockdown. They believe an online sales tax would level the playing field for stores dealing with the economic damage of the coronavirus.

Online retailers didn’t need much of a push to continue grabbing a bigger share of market.

They got it anyway when lockdowns and stay-at-home orders closed brick-and-mortar stores across the country. Now, local businesses are trying to recover and governments are bracing for a sharp decline in sales tax revenue.

In Missouri, the budget impact could be even worse. That’s because Missouri is among the few states that didn’t take advantage of a U.S. Supreme Court ruling that opens the door to a tax on internet sales.

“There’s going to be a significant revenue shortfall for counties,” said Lee Sawyer, the presiding commissioner for Buchanan County. “If the internet sales tax had been implemented, it would be one thing that would be a little bit of a boost. I don’t know if it would make it up.”

The 2018 South Dakota v. Wayfair ruling allows states to collect and remit sales taxes collected from retail businesses that lack a physical presence in that state. Of the states that already allow a sales tax, all but Florida and Missouri have an “economic nexus law,” which allows them to collect an online tax if sales exceed a certain level.

Last year, Missouri Gov. Mike Parson threw his support behind the concept of a sales tax on purchases made over the internet. The measure didn’t pass in 2019, and various proposals languish amid other unfinished legislative business with one week to go in this year’s session, which has already been disjointed because of the coronavirus.

“We were hopeful the internet tax would make it through,” Sawyer said. “It was one of the things that got high-centered.”

Sawyer said he’s not yet sure how much county sales tax revenue has declined, but next week’s April report could be an eye-opener. On the city side, budget discussions began with talk of some revenue sources being off 30%. The federal government’s coronavirus stimulus bill includes $150 billion in direct aid to state and local governments, but that money has to be used on costs directly related to the pandemic, not to shore up budget gaps.

The Missouri Department of Revenue projects that a tax on e-commerce could bring in as much as $145 million in revenue, though that’s a moving target and some legislative proposals include income tax cuts as an offset. Retailers who are just emerging from the shutdown believe an online tax is necessary, not just to shore up budgets but to boost brick-and-mortar stores that are reeling.

“We are at a disadvantage every day, especially now that folks have been forced to shop online at home,” said Mark Antle, owner of Leibowitz Menswear at the East Hills Shopping Center. “People that are selling on the internet and online should have to help produce that tax base, especially with the economy in the situation it’s going to be in when this is all said and done.”

To understand the impact, East Hill Shopping Center owner Steven L. Craig points to the experience of one of his company’s retail developments in Oregon. Credit card receipts showed large numbers of customers were willing to drive hundreds of miles, from Washington state and California, just to take advantage of a lower tax rate.

Imagine the impact if those customers don’t have to drive at all. They shop from home now.

“Taxes do make a difference,” Craig said. “People are very cognizant of it. The shutdown affected everyone, but it’s an advantage we don’t have.”

State Rep. J. Eggleston, R-Maysville, said he’s hopeful an internet taxation bill can be addressed in the last week of session or possibly in a special session. He is chairman of the House Subcommittee on Internet Taxation.

“Mr. Chief Justice, if I may, one brief announcement,” the Kentucky Republican said. “In the morning, there will be a coronavirus briefing for all members at 10:30.”

That brief aside stands as the Congressional Record’s first reference to the outbreak that now, 108 days later, dominates almost every aspect of governmental and personal existence.

As the months have rolled by, deaths mounting and jobless rates soaring, most public life closing and now slowly reopening, members of Congress take stock of relief efforts extended and ask, looking ahead: “What’s next?”

Missouri Sen. Josh Hawley thinks he knows. At least he has identified his priority.

He has seen and supported the spending of trillions of dollars to shore up the economy and provide aid to medical professionals and first responders for combating the virus. With the Senate returning to Washington last week, ideas began circulating about the next wave of help.

Numbers provide a stark explanation of the economic problem. In December, the Bureau of Labor Statistics pointed to 15 states with unemployment rates below 3.5%.

On Friday, the federal government revealed that the jobless rate had climbed to nearly 15%. The number of people losing their jobs in April topped 20 million.

For comparison’s sake, the one-month job losses amount to the population of St. Joseph, 267 times over.

Attention to this should be the next action of Congress, Hawley said.

“We’ve got 30 million people, over 400,000 in Missouri, who have claimed unemployment benefits,” Hawley told News-Press NOW last week before the release of the April jobs report.

If able to write the next phase of COVID-19 relief legislation, Hawley said he would focus on getting people rehired.

“I think we need to give businesses the support to rehire laid-off workers,” the Republican said. “We need to make sure that workers who currently have a job, keep their job, so that’s why I propose a payroll-tax rebate that will actually put money back into the hands of workers using the payroll system.”

Missouri’s senior senator, Roy Blunt, also a Republican, chairs the appropriating subcommittee that funds federal health programs. He has championed a process like the reality show “Shark Tank” that can launch a competition to create new technologies by raising bold ideas in the public and private sectors.

On the Senate floor last week, he said this model can be employed to help Americans feel secure in returning to the workplace and improving the economy.

The senator insisted that Americans need this to happen on all fronts.

“We need tests that are easier to take and get a quick response. We need millions of these tests that millions of Americans will take more than once,” he said.

St. Joseph School District educators gather on Thursday at Webster Learning Center. The cookout is one of the first gatherings for staff and faculty the district has held since early March that involved sustained, in-person interactions.

Displays list the food available at the Thursday gathering at Webster Learning Center, and the message, 'Miss You! Can't Wait to 'Ketchup' Soon!'

Quentin Trotter, Coach Regi Trotter's son, looks over the display of desserts with his father on Wednesday at Country Cookie.

As St. Joseph completes the first week that saw post-outbreak business activity carefully begin to resume, educators have taken opportunities to spend time with each other, while their students remain homebound, and also to gratefully accept the support of the community.

By no means is COVID-19 near its end, and St. Joseph School District teachers — who bond with young people in a way that is surpassed only by close family members — tell News-Press NOW they dearly miss the day-to-day interactions with their kids, who will be absent for some time to come. But we are approaching the summer, and with it comes the vision of a light on the horizon, the sounds of events like a faculty reunion barbecue on Thursday, and the taste of foods donated to all educators by local businesses.

There are other takeaways from this stage of the pandemic and Teacher Appreciation Week, which has been observed nationwide. Coach Regi Trotter, leader of the Central High Indians football program and a physical education instructor, believes these experiences will provide a lesson in physical and mental toughness for an entire generation that will be invaluable.

“I tell my students, take this time to enjoy your time with your family,” Trotter said. “Continue to be resilient. Take that resiliency with you.”

The Webster Learning Center, host of Thursday’s barbecue, which served up hamburgers and hot dogs to staff and faculty — including to those driving through in their vehicles to maintain social distancing — also has been affected by the COVID-19 shutdown. Betty Wymore, director of adult education, said some aspects of the school district’s program for adults have been brought to a halt.

Language learners in the ESL program have enough challenges in their studies as it is, but to funnel coursework through the internet is another hill to climb. Language and technology barriers have proven to be a vexing obstruction that has required creativity and determination to resolve. Wymore is grateful for the community’s support during this situation.

“A lot of our students do not have access to technology,” Wymore said. “Others are just completely unfamiliar with it. They may know about Zoom, and how to open it up, but there’s been a lot of training involved. We’ve taken it step by step.”

J. Eric Simmons ordinarily provides materials for his visual arts classes to participant students, or provides supply lists for students to fulfill when they attend courses. In today’s environment, they have to work with what they can find around the house.

Simmons is also president of the St. Joseph chapter of the National Education Association, the largest teacher trade union in the U.S. The community’s support in times like these is greatly appreciated, he said, but he also affirmed that one of the most important ways school constituents can show their support for educators is by making sure elected officials are providing them the resources they need to succeed.

“Especially today, we need to be making sure that we are providing the services and the equipment and the tools our educators need to really prepare our students for the future.” 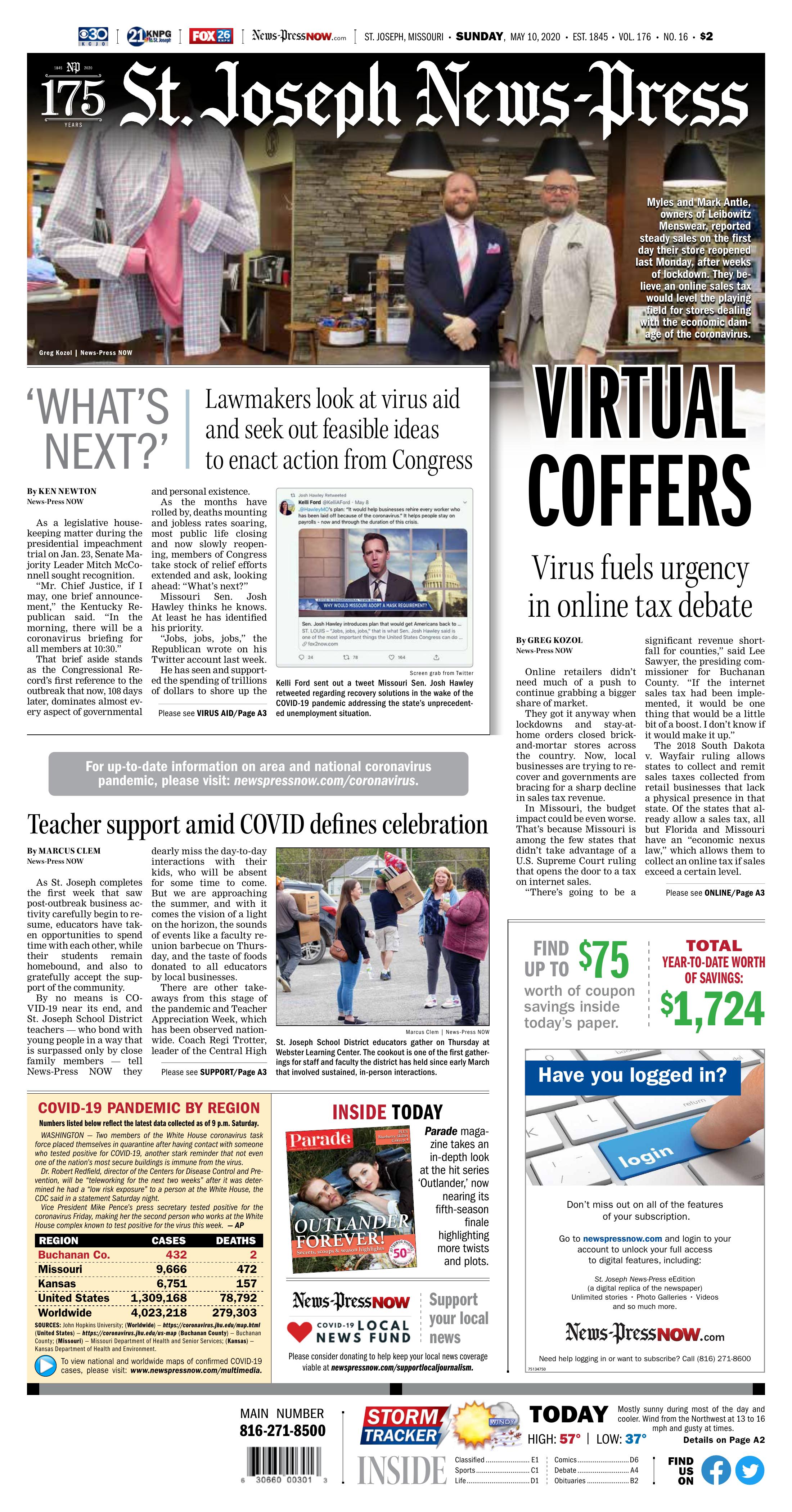