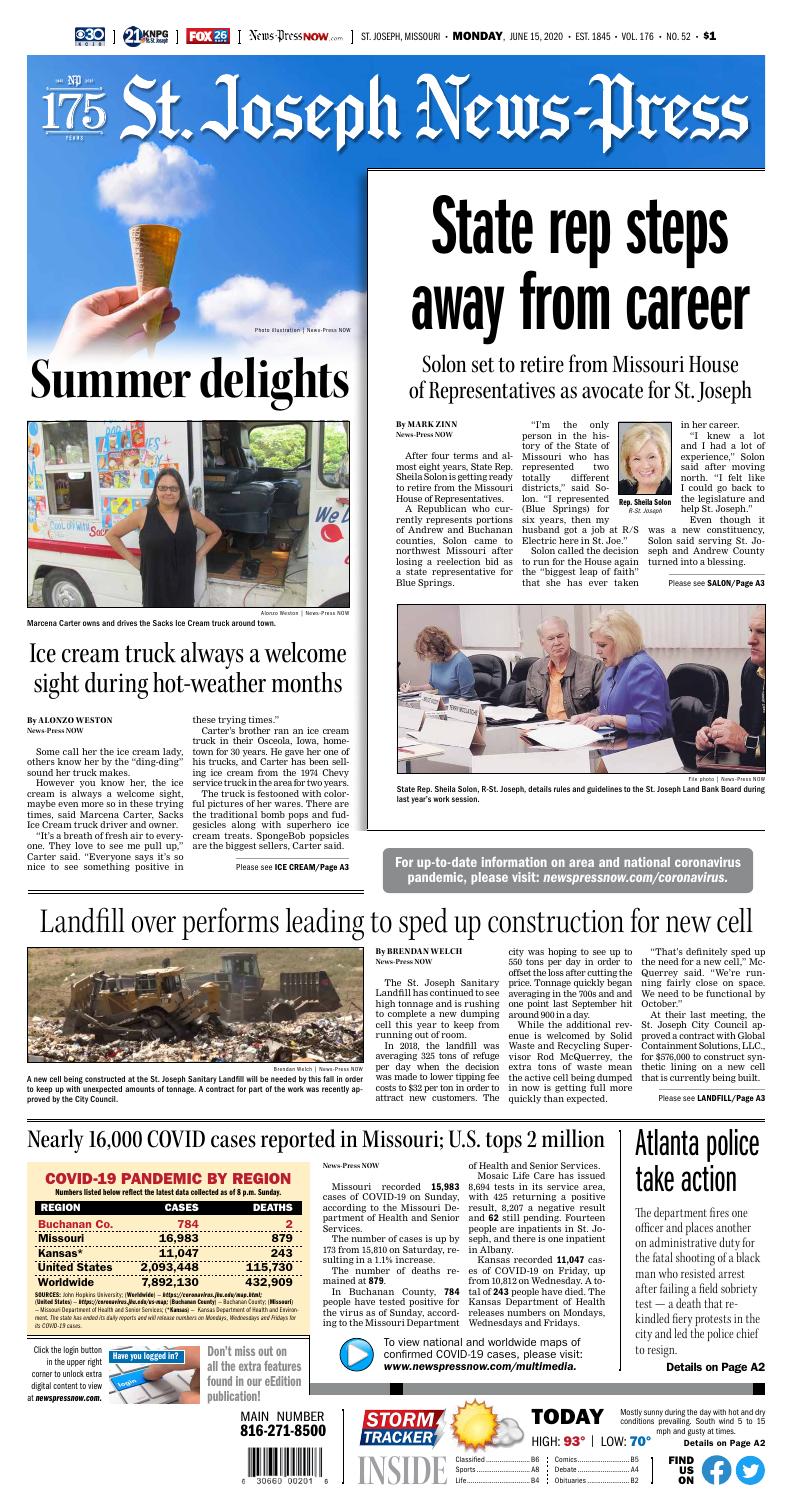 After four terms and almost eight years, State Rep. Sheila Solon is getting ready to retire from the Missouri House of Representatives.

A Republican who currently represents portions of Andrew and Buchanan counties, Solon came to northwest Missouri after losing a reelection bid as a state representative for Blue Springs.

“I’m the only person in the history of the State of Missouri who has represented two totally different districts,” said Solon. “I represented (Blue Springs) for six years, then my husband got a job at R/S Electric here in St. Joe.”

Solon called the decision to run for the House again the “biggest leap of faith” that she has ever taken in her career.

“I knew a lot and I had a lot of experience,” Solon said after moving north. “I felt like I could go back to the legislature and help St. Joseph.”

Even though it was a new constituency, Solon said serving St. Joseph and Andrew County turned into a blessing.

“These last two years, I will say, have been the best two years of service,” she said in an interview with News-Press NOW.

Solon was able to accomplish several legislative achievements while in St. Joseph, including a measure last year that created the St. Joseph Land Bank and reforms to the state’s foster care apparatus.

“This year, I passed House Bill 1414, which was a lot of really big changes to our foster care system,” Solon said. “A lot of things that we’ve been trying to get changed for the last five or ten years.

“We got that accomplished to add greater transparency and accountability to our foster care system, ways to help attract more foster parents and probably the most important parts of this is to help these kids that are our responsibility in the foster care system be listened to.”

First elected to the House in 2010, Solon represented the 55th District in Blue Springs. After redistricting, the district she called her home was District 31. She won reelection in 2012 and 2014, but was unseated in a contentious 2016 Republican primary with Dan Stacy, now a state representative who served along Solon the last two sessions.

Solon was once again voted into state office in 2018, an election cycle that saw several open House seats in St. Joseph as well as a closely watched Senate election that ended in a victory for first-time officeholder Sen. Tony Luetkemeyer, a Republican who represents Buchanan and Platte counties. Also elected that year: State Reps. Brenda Shields and Bill Falkner, both freshman legislators from St. Joseph.

As for future political endeavors, Solon said she is leaving the door open.

“I had my life pretty well planned out: I was gonna run for the Senate in my previous seat in the Kansas City area, then everything changed and I moved here,” she said. “I love St. Joe and the community, and we’ve made so many friends here.

“I don’t know really what the future holds. I’ve had a lot of offers, but I want to be a great state rep to the very end.”

Some call her the ice cream lady, others know her by the “ding-ding” sound her truck makes.

However you know her, the ice cream is always a welcome sight, maybe even more so in these trying times, said Marcena Carter, Sacks Ice Cream truck driver and owner.

“It’s a breath of fresh air to everyone. They love to see me pull up,” Carter said. “Everyone says it’s so nice to see something positive in these trying times.”

Carter’s brother ran an ice cream truck in their Osceola, Iowa, hometown for 30 years. He gave her one of his trucks, and Carter has been selling ice cream from the 1974 Chevy service truck in the area for two years.

The truck is festooned with colorful pictures of her wares. There are the traditional bomb pops and fudgesicles along with superhero ice cream treats. SpongeBob popsicles are the biggest sellers, Carter said.

“All ice cream is prepackaged. When I hand them the ice cream, it’s the first time it’s been touched,” she said.

Once a week, Carter drives to Kansas City to pick up her ice cream wares. She spends the rest of the week driving all over Andrew, Buchanan and Clinton counties.

“I try to get out to all the areas every week. I have lots of regular customers,” Carter said.

Adults are just as excited to see her as the kids, she added. Men working in hot garages welcome her as she makes the rounds Downtown.

The pandemic restrictions have changed the way she delivers the ice cream to neighborhoods somewhat.

“Each house stands individually and waits for me to pull up to their house instead of everyone congregating on the corner,” she said. “Once you get one person, the whole neighborhood comes out.”

Every ice cream truck has its own music. Sacks Ice Cream uses a bright, cheery 1940s carnival tune to herald her coming.

Carter said she gets great joy from her job and bringing wonderful childhood memories back to people.

Everyone makes statements like ‘I haven’t seen one of these since I was a kid,’” Carter said.

People can make reservations for birthday parties and other events by visiting the Sacks Ice Cream Facebook page or by calling 641-414-6561.

A new cell being constructed at the St. Joseph Sanitary Landfill will be needed by this fall in order to keep up with unexpected amounts of tonnage. A contract for part of the work was recently approved by the City Council.

The St. Joseph Sanitary Landfill has continued to see high tonnage and is rushing to complete a new dumping cell this year to keep from running out of room.

In 2018, the landfill was averaging 325 tons of refuge per day when the decision was made to lower tipping fee costs to $32 per ton in order to attract new customers. The city was hoping to see up to 550 tons per day in order to offset the loss after cutting the price. Tonnage quickly began averaging in the 700s and and one point last September hit around 900 in a day.

While the additional revenue is welcomed by Solid Waste and Recycling Supervisor Rod McQuerrey, the extra tons of waste mean the active cell being dumped in now is getting full more quickly than expected.

“That’s definitely sped up the need for a new cell,” McQuerrey said. “We’re running fairly close on space. We need to be functional by October.”

At their last meeting, the St. Joseph City Council approved a contract with Global Containment Solutions, LLC., for $576,000 to construct synthetic lining on a new cell that is currently being built.

McQuerrey explained that the excavation of that cell is ongoing, and then a layer of clay will be added before the synthetic liner can be constructed. The final step will involve adding a layer of sand to act as a drainage media.

It may have been expected that the shelter-in-place period brought on by the coronavirus pandemic would slow down daily tonnage, but McQuerrey said the numbers stayed high and even grew. In May, the landfill saw around 355 vehicles bring in 888 tons of waster per day.

“It appears that everybody that was supposed to be staying at home decided it was a good time to clean their house and bring it to the landfill,” McQuerrey said.

The council also approved an annually required commitment to the Missouri Department of Natural Resources that assures closure and post-closure care of the landfill would be funded if the City of St. Joseph decided to no longer own and operate the facility.

“It calculates how much money, essentially, that if St. Joseph was to just throw their hands up and walk away from it, the state would have to have to basically come in and close it and maintain it for the next 30 years,” McQuerrey said.

The $15.7 million estimate would be taken from taxes and other funding sources available to the city to complete the obligation until the post-closure phase had ended.

He said it is very unlikely the city would ever give up operations of the landfill.

If unexpected tonnage continues to come in, it will eventually effect the overall space at the landfill, but McQuerrey said it would still likely be several decades before that is a concern.

Missouri recorded 15,983 cases of COVID-19 on Sunday, according to the Missouri Department of Health and Senior Services.

The number of deaths remained at 879.

In Buchanan County, 784 people have tested positive for the virus as of Sunday, according to the Missouri Department of Health and Senior Services.

Mosaic Life Care has issued 8,694 tests in its service area, with 425 returning a positive result, 8,207 a negative result and 62 still pending. Fourteen people are inpatients in St. Joseph, and there is one inpatient in Albany.

Kansas recorded 11,047 cases of COVID-19 on Friday, up from 10,812 on Wednesday. A total of 243 people have died. The Kansas Department of Health releases numbers on Mondays, Wednesdays and Fridays. 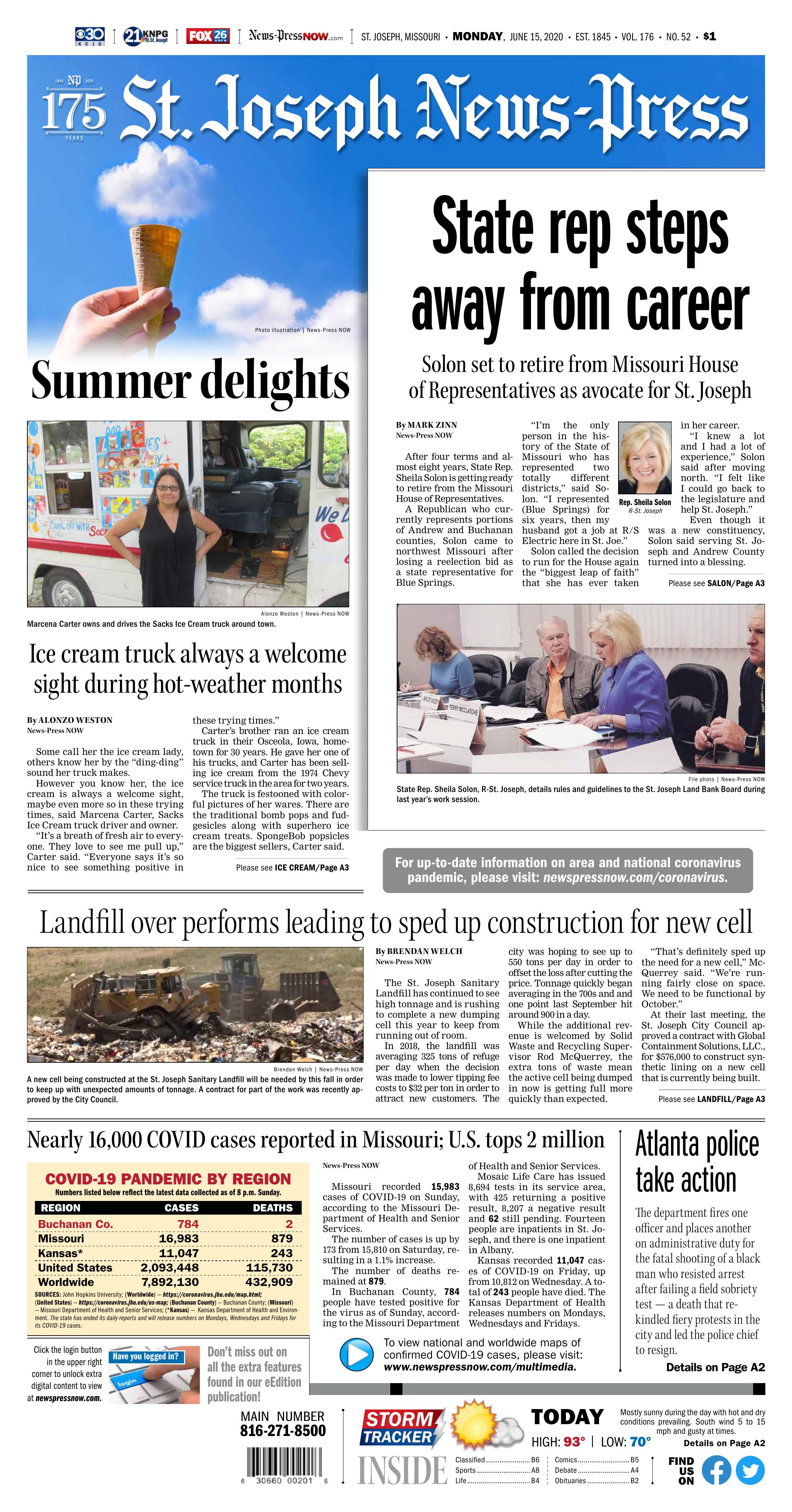