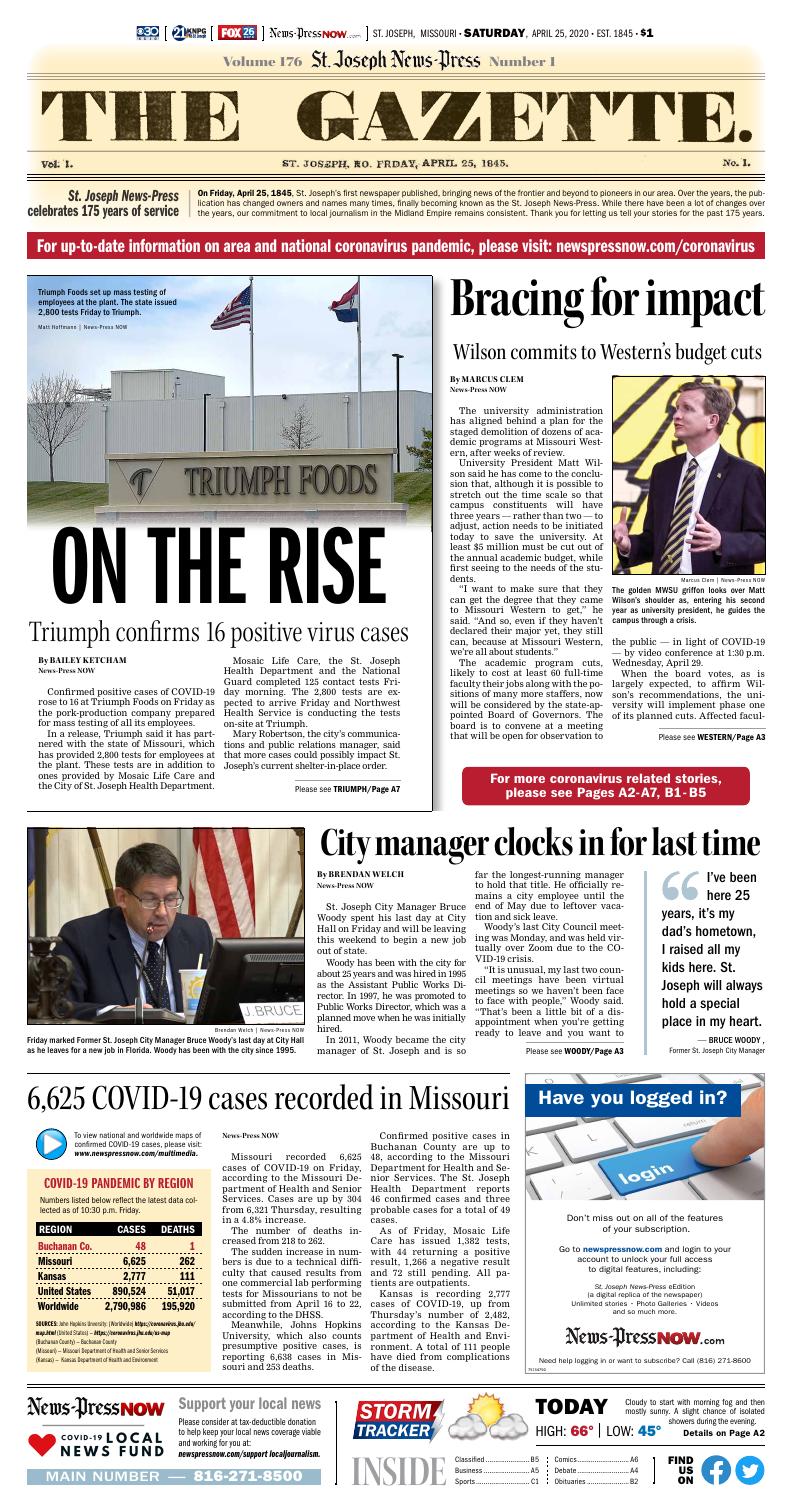 Triumph Foods set up mass testing of employees at the plant. The state issued 2,800 tests Friday to Triumph.

Confirmed positive cases of COVID-19 rose to 16 at Triumph Foods on Friday as the pork-production company prepared for mass testing of all its employees.

In a release, Triumph said it has partnered with the state of Missouri, which has provided 2,800 tests for employees at the plant. These tests are in addition to ones provided by Mosaic Life Care and the City of St. Joseph Health Department.

“If we’re seeing a significant amount of positives coming back from the testing, I’m sure the council will reconvene and discuss what needs to happen moving forward with the order,” Robertson said.

Dr. Randall Williams, director of Missouri Department of Health and Senior Services, said Triumph will be testing individuals who are not showing symptoms in addition to those who do have them.

“Based on other meat-packing plant experiences, we thought we ought to test everyone,” Williams said.

Williams said the majority of the employees being tested will be asymptomatic because Triumph doesn’t allow employees to work if they have a fever or cough.

“We have a very small group of people who are positive, but we are doing comprehensive surveillance to identify anyone else out there that’s infected, and we don’t usually do that,” Williams said.

Williams has been working with Triumph on a daily basis to provide assistance, and he said they’re using commercial and state labs to help with testing. Results from all tests are expected to come back between 24 and 48 hours after they are taken.

“The testing will be about 500 a day, so it will take about four days to complete the testing,” Williams said.

Williams said the company and health department are paying close attention to where people testing positive live, because that could be where some contracted the virus. While employees wait to be tested, Williams encouraged them to continue rigorous hand washing and take temperatures one to two times a day.

“It’s a hallmark of this disease that a lot of people eventually will develop a fever,” Williams said.

Williams said Triumph currently isn’t classified as an outbreak due to the number of employees the company has, and he hopes the testing will keep the numbers limited.

”We probably wouldn’t have been able to do this weeks ago because we just didn’t have the capacity and didn’t have enough tests,” Williams said.

Triumph officials stated they are taking protective measures to protect employees, including enhanced cleaning and sanitizing work areas throughout the plant, providing face masks for all employees and installing plexiglass dividers to help with social distancing.

The results of each round of testing are expected to come back as early as the following day. Officials have stated getting results on testing should take about 24 to 48 hours.

Dark days have fallen on Missouri Western State University, but the future beyond is said to be bright once sustainability is attained via budget cuts.

The golden MWSU griffon looks over Matt Wilson’s shoulder as, entering his second year as university president, he guides the campus through a crisis.

The cuts are less of a sacrifice, President Wilson says, and more of a recognition that Missouri Western can’t be all things for all people as much as it has been.

The university administration has aligned behind a plan for the dismantling of dozens of academic programs at Missouri Western, after weeks of review.

University President Matt Wilson said he has come to the conclusion that, although it is possible to stretch out the time scale so that campus constituents will have three years — rather than two — to adjust, action needs to be initiated today to save the university. At least $5 million must be cut out of the annual academic budget, while first seeing to the needs of the students.

The academic program cuts, likely to cost at least 60 full-time faculty their jobs along with the positions of many more staffers, now will be considered by the state-appointed Board of Governors. The board is to convene at a meeting that will be open for observation to the public — in light of COVID-19 — by video conference at 1:30 p.m. Wednesday, April 29.

Wilson emphasized that not all of the sacrifices will be coming out of academia. While declining to discuss specifics — citing personnel privacy concerns — Wilson said at least $600,000 will be saved by reducing administrator compensation. At least $500,000 will be stripped out of the Missouri Western Athletics general fund. These steps, among others, will be implemented without delay on Wilson’s authority, and follow-up measures taken last fall to reduce the number of administrative positions, leave other positions open and lower operating costs.

Wilson spoke at length about how these measures are not being implemented in a vacuum, but as part of a large array of reforms and initiatives that are designed to secure Missouri Western’s future for the long term. He estimates that at least $300,000 in annual revenue will be generated by the new women’s lacrosse program, for which Head Coach Rachel Benzing was hired in January. In an NCAA Division II environment, Wilson explained, it is often advantageous for a university to expand into new athletic ventures. Students, who attend specifically to participate in the new program, generally won’t be doing so on the basis of athletic scholarships, and thus inject capital in the form of tuition, fees, room and board and other contributions.

Wilson described his actions and his recommendations to the Board of Governors as a sad, necessary reality.

“Really, here is what it is,” he said. “What is going to be translatable to our workforce today? What are we going to be able to sell to students to get them to want to come here? What attracted me to Missouri Western has not disappeared. It will not disappear. This will involve some very difficult steps. But through those steps, I mean, we’re going to come out, and we’re going to be OK.”

The major programs subject to some degree of phase out within the next three years are as follows, after University President Matt Wilson announced final adjustments on Friday:

Bachelor of Fine Arts with major emphasis in Studio Art;

Bachelor of Science in Engineering, major in Art;

Bachelor of Music, major in Music Performance and Industry;

BSE, major in Speech and Theatre;

A complete list of all minors and academic concentrations subject to change can be found via www.tinyurl.com/mwsurecs

Friday marked Former St. Joseph City Manager Bruce Woody’s last day at City Hall as he leaves for a new job in Florida. Woody has been with the city since 1995. 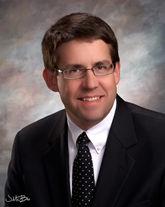 St. Joseph City Manager Bruce Woody spent his last day at City Hall on Friday and will be leaving this weekend to begin a new job out of state.

In 2011, Woody became the city manager of St. Joseph and is so far the longest-running manager to hold that title. He officially remains a city employee until the end of May due to leftover vacation and sick leave.

Woody’s last City Council meeting was Monday, and was held virtually over Zoom due to the COVID-19 crisis.

“It is unusual, my last two council meetings have been virtual meetings so we haven’t been face to face with people,” Woody said. “That’s been a little bit of a disappointment when you’re getting ready to leave and you want to say goodbye to everybody. It’s difficult when we’re in this environment where everybody has to be so impersonal.”

At that meeting, former St. Joseph Mayor and state Rep. Bill Falkner joined Woody and Mayor Bill McMurray in the Council Chamber, where Falkner read a resolution from the state thanking Woody and acknowledging his work.

“I thought the city was very fortunate to have him as city manager,” Falkner said. “He would come and tell us all the information. He would tell us what we might want to do and how we might want to do it. He let us decide, as he should have, us being the elected officials.”

He said Woody always gave them “the good, the bad and the ugly” when it came to information.

Woody was then presented the Key to the City by McMurray.

Woody said he was honored to be recognized, and thanked his staff for working hard with him over the years.

He has an engineering background and said he was always fond of public works projects, especially CIP projects, which are chosen by the citizens.

“They’re important projects to the community at large,” Woody said. “They’re fun projects, usually, because they’re either a major improvement to an existing facility or maybe an all new project altogether. So, those have always been very enjoyable projects.”

One major capital project was the Blacksnake Creek project, which included a massive tunnel boring aspect. This project was controversial, but the goal it is expected to achieve was mandated.

Faulkner said Woody worked hard to keep prices down, and saved the people more money than they realize.

“He did an excellent job of navigating the sewer mandate we were under,” Falkner said. “He was able to work with the different parties to lessen the burden on what was originally going to be asked of the city and from the citizens to pay on the sewer bills.”

Woody worked in the Kansas City area before moving to St. Joseph, but has always had family in the city and considers it a home.

“I love St. Joe,” Woody said. “I’ve been here 25 years, it’s my dad’s hometown, I raised all my kids here. St. Joseph will always hold a special place in my heart.“

Missouri recorded 6,625 cases of COVID-19 on Friday, according to the Missouri Department of Health and Senior Services. Cases are up by 304 from 6,321 Thursday, resulting in a 4.8% increase.

The sudden increase in numbers is due to a technical difficulty that caused results from one commercial lab performing tests for Missourians to not be submitted from April 16 to 22, according to the DHSS.

Confirmed positive cases in Buchanan County are up to 48, according to the Missouri Department for Health and Senior Services. The St. Joseph Health Department reports 46 confirmed cases and three probable cases for a total of 49 cases.

As of Friday, Mosaic Life Care has issued 1,382 tests, with 44 returning a positive result, 1,266 a negative result and 72 still pending. All patients are outpatients.

Kansas is recording 2,777 cases of COVID-19, up from Thursday’s number of 2,482, according to the Kansas Department of Health and Environment. A total of 111 people have died from complications of the disease. 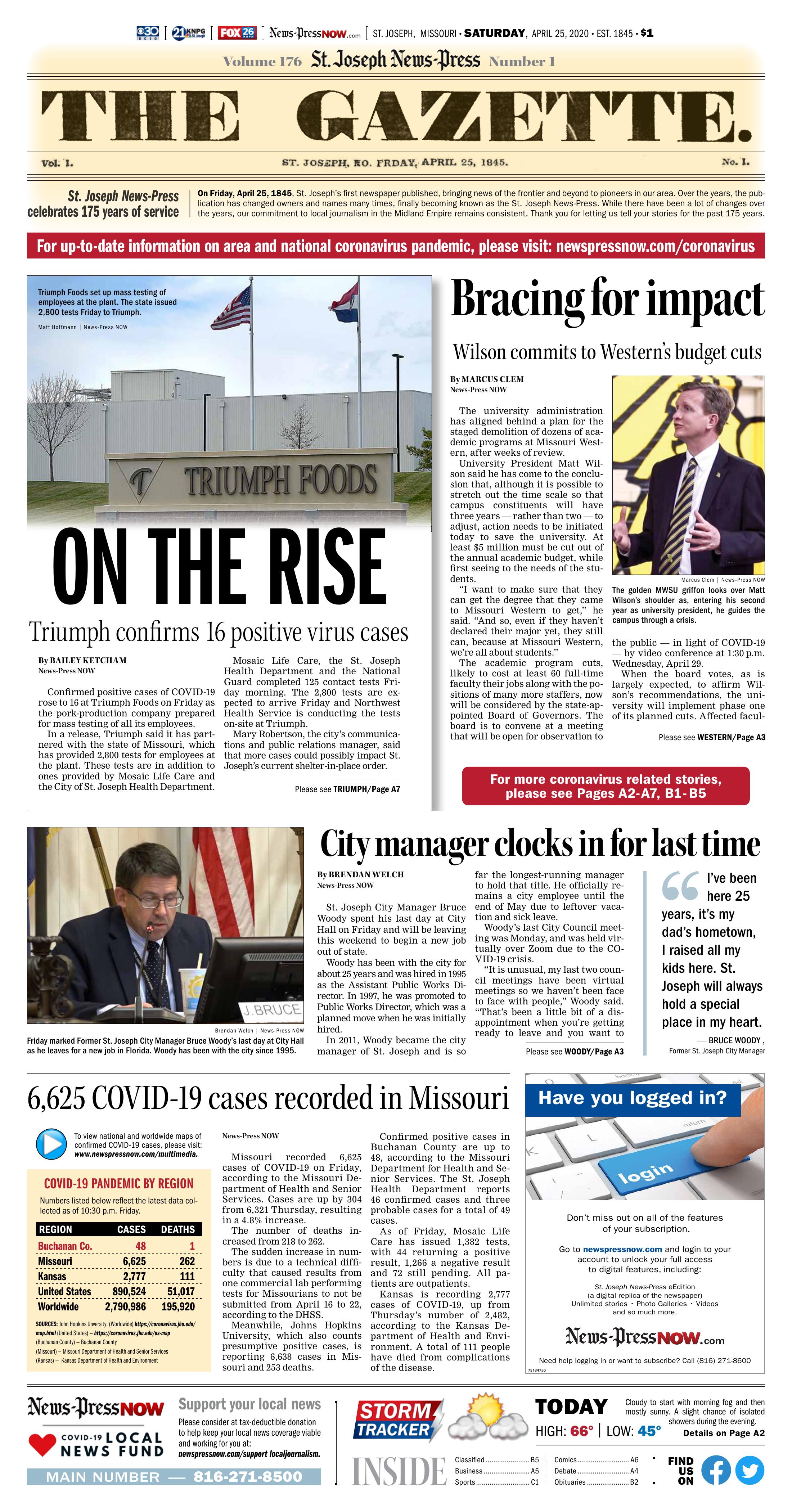