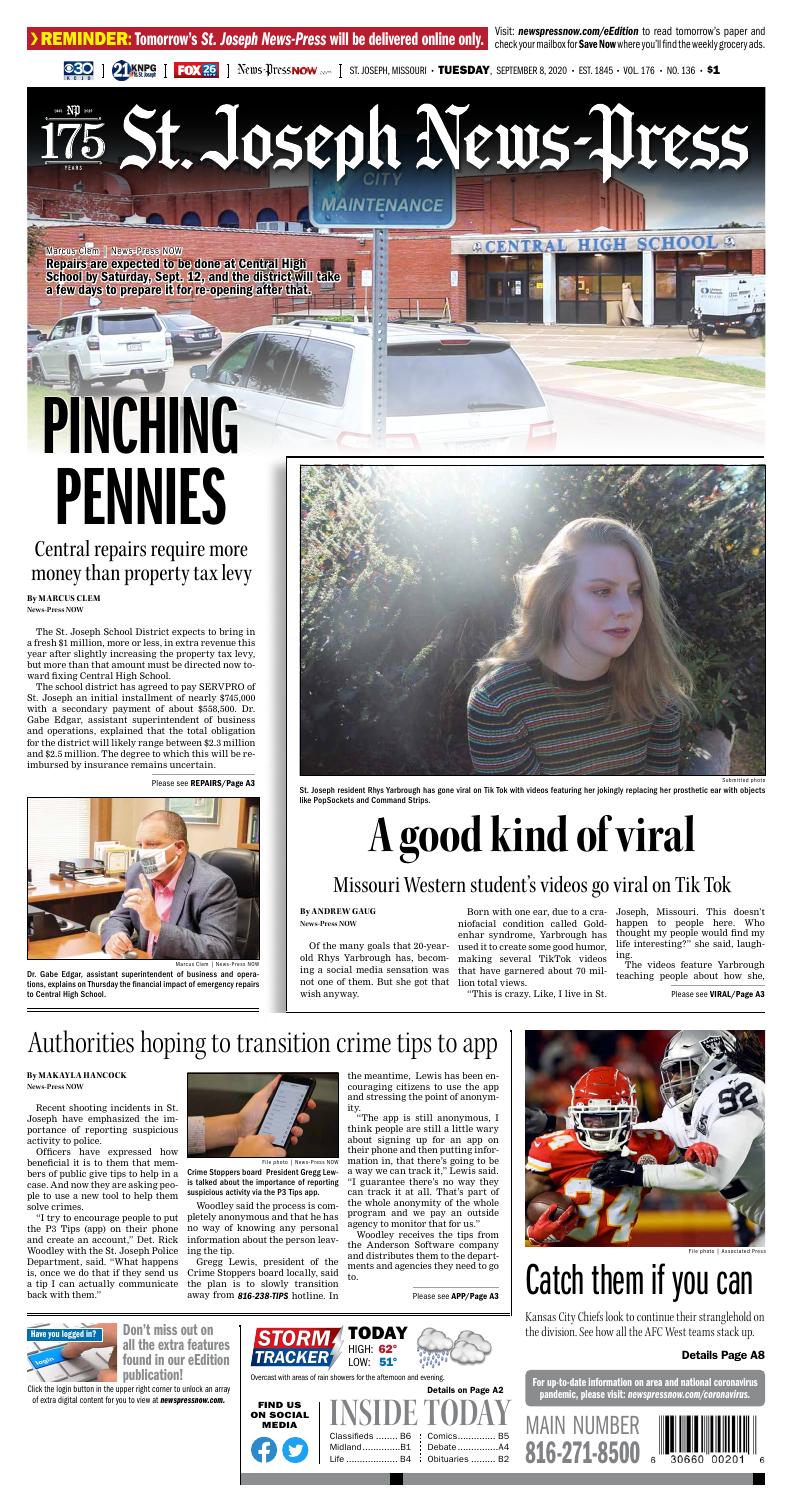 Repairs are expected to be done at Central High School by Saturday, Sept. 12, and the district will take a few days to prepare it for re-opening after that.

The St. Joseph School District expects to bring in a fresh $1 million, more or less, in extra revenue this year after slightly increasing the property tax levy, but more than that amount must be directed now toward fixing Central High School.

The school district has agreed to pay SERVPRO of St. Joseph an initial installment of nearly $745,000 with a secondary payment of about $558,500. Dr. Gabe Edgar, assistant superintendent of business and operations, explained that the total obligation for the district will likely range between $2.3 million and $2.5 million. The degree to which this will be reimbursed by insurance remains uncertain.

Mold spores were found to have extensively contaminated the annex on Aug. 15, forcing emergency repairs and a building closure until at least mid-September. Meanwhile, Central students are studying online.

The situation leaves the district in a precarious financial position, at least if it wishes to avoid significant deficit spending, as Edgar reiterated he is determined to do. Although more than $40 million in property tax revenues are forecast for Fiscal Year 2021, which began July 1 and runs through June 30, 2021, the district has little flexibility in a time where seven-figure cuts already have been made to its annual revenue by the state.

Edgar said he considers the district fortunate to have received the first cut in June; revenues for FY 2020 helped absorb it. The remaining budget restriction arrived in July, and it was anticipated and built into the FY 2021 budget. Altogether, the district lost about $3.2 million in one-time losses.

That is in part what motivated Edgar to propose a nearly 10-cent increase in the base property tax levy, to about $3.83 per $100 in assessed valuation. Now the Central repair, at least for this year, cancels out that gain. And the financial picture is not getting any rosier as time goes on.

Sen. Dan Hegeman, R-Cosby, chair of the Missouri Senate Appropriations Committee, said he is worried the state Legislature also will be prompted to reduce K-12 funding for FY 2022. He said the decision by Missouri voters to approve a Medicaid expansion program by referendum in August, combined with an ongoing collapse in state tax revenues driven by COVID-19’s economic impacts, leaves the governing body with limited flexibility.

Crime Stoppers board President Gregg Lewis talked about the importance of reporting suspicious activity via the P3 Tips app.

Recent shooting incidents in St. Joseph have emphasized the importance of reporting suspicious activity to police.

Officers have expressed how beneficial it is to them that members of public give tips to help in a case. And now they are asking people to use a new tool to help them solve crimes.

“I try to encourage people to put the P3 Tips (app) on their phone and create an account,” Det. Rick Woodley with the St. Joseph Police Department, said. “What happens is, once we do that if they send us a tip I can actually communicate back with them.”

Woodley said the process is completely anonymous and that he has no way of knowing any personal information about the person leaving the tip.

Gregg Lewis, president of the Crime Stoppers board locally, said the plan is to slowly transition away from 816-238-TIPS hotline. In the meantime, Lewis has been encouraging citizens to use the app and stressing the point of anonymity.

“The app is still anonymous, I think people are still a little wary about signing up for an app on their phone and then putting information in, that there’s going to be a way we can track it,” Lewis said. “I guarantee there’s no way they can track it at all. That’s part of the whole anonymity of the whole program and we pay an outside agency to monitor that for us.”

Woodley receives the tips from the Anderson Software company and distributes them to the departments and agencies they need to go to.

The 238-TIPS line is still in use and those who call will be asked the same questions that are found on the app, which helps provide better information to law enforcement.

In addition, the app helps track tips and allows officers to confirm if a tip did in fact lead to an arrest and can result in a reward.

“We just had a recent one where a gentleman was picked up on a warrant and they were requesting a reward. The process is I send that information to the board with a recommendation on the amount of the reward and they vote on it.”

Though the number of tips vary from month to month, Woodley noticed a spike where people used the tip line to complain in June when a social media video of an officer went viral.

Another point Woodley makes besides the tip line and app not being a complaint hotline is that it is not used to make a formal report.

“I can communicate with the tipster as long as they open their end of it, I can put a narrative in there and tell them that they need to either call the (communications) center to make the report or I need more information and we’ve done that before,” Woodley said, “People have sent back more information that we were able to get and I was able to forward it on to an investigator who could follow up.”

A still from a Tik Tok video by Rhys Yarbrough. The Missouri Western student’s videos have garnered more than 70 million views.

Of the many goals that 20-year-old Rhys Yarbrough has, becoming a social media sensation was not one of them. But she got that wish anyway.

Born with one ear, due to a craniofacial condition called Goldenhar syndrome, Yarbrough has used it to create some good humor, making several TikTok videos that have garnered about 70 million total views.

“This is crazy. Like, I live in St. Joseph, Missouri. This doesn’t happen to people here. Who thought my people would find my life interesting?” she said, laughing.

The videos feature Yarbrough teaching people about how she, jokingly, wears face masks comfortably. One has her attaching a PopSocket to her head, another has her using Command Strips and a third has her attaching her prosthetic ear.

The idea came to Yarbrough through a mixture of suggestions from friends and encouragement from her boyfriend when she was shopping.

“I was in the parking lot and I just put them on. I didn’t even watch the final videos. I just posted them,” she said.

Becoming a sensation literally overnight on the video platform, most famous for dances and comedic skits, Yarbrough discovered the next day that the video accrued millions of likes and views.

A political science major at Missouri Western State University, Yarbrough keeps busy balancing her virtual classes at Missouri and working at Starbucks. While becoming a TikTok star is a goal of her 13-year-old sister, she said it wasn’t a thought in her wildest dreams.

“It’s been kind of fun to poke fun at her,” Yarbrough said, laughing.

Growing up, Yarbrough said she underwent nine surgeries to address complications with Goldenhar syndrome, like corrections to her jaw and cheeks. At times, she said, it was tough not knowing other people dealing with it. With her video getting shared around social media, she said she’s been able to connect with others who know her struggle.

“I’ve got hundreds of messages from people saying, like, ‘My son has that, I have that and I’ve never seen anybody do it like you do’ and ‘You’re so funny’ and ‘You’ve made me feel normal today.’ They bring so much joy to me because I wish I had that, and I feel so, I guess, blessed to be that person for somebody else,” she said.

In talking with others with Goldenhar syndrome, Yarbrough also feels a little bit of guilt because she knows the cyberbullying that other people who have been more harshly affected by it have gone through.

“(I know) somebody who has a more severe form of Goldenhar where it affected both sides. She’s on TikTok, too. The comments she gets are horrible, like people telling her that they’re scared of her and that she should kill herself,” she said.

The worry for Yarbrough is that she got attention because she’s viewed as a more socially acceptable example of the syndrome.

“This has all been really great. I’ve gotten a lot of support, but I’m worried that I get that support because I still look ‘normal,’” she said.

With her elevated platform, Yarbrough wants to use it to tell others to treat all people as normal and to be kind to everyone.

“People with disabilities, impairments, they all live normal lives ... That’s just an aspect, but it’s not what makes them,” Yarbrough said.

While Yarbrough believes the TikTok fame is fleeting, she wants to use whatever she believes is left of it to do good. After the videos went viral, she teamed up with PopSocket to choose some designs in her name to benefit a cranial facial center that’s a part of a Colorado Hospital.

“It will focus on people that are born with like conditions like mine. The timing just fit perfectly, because September is also Cranial Facial Awareness Month. So it all just feels like stars have aligned,” she said.

Since the videos went viral, Yarbrough has given interviews to outlets like Buzzfeed. It’s been enough attention that she said she’s not sure if she wants to make another video.

“I think I’m more just scared because if I do anything else, people are like ‘We don’t care. Just put things on your ear. Like, that’s why you’re viral. Don’t do anything else.’ I want to keep it going. But ... I don’t, I’m not creative,” she said, laughing. 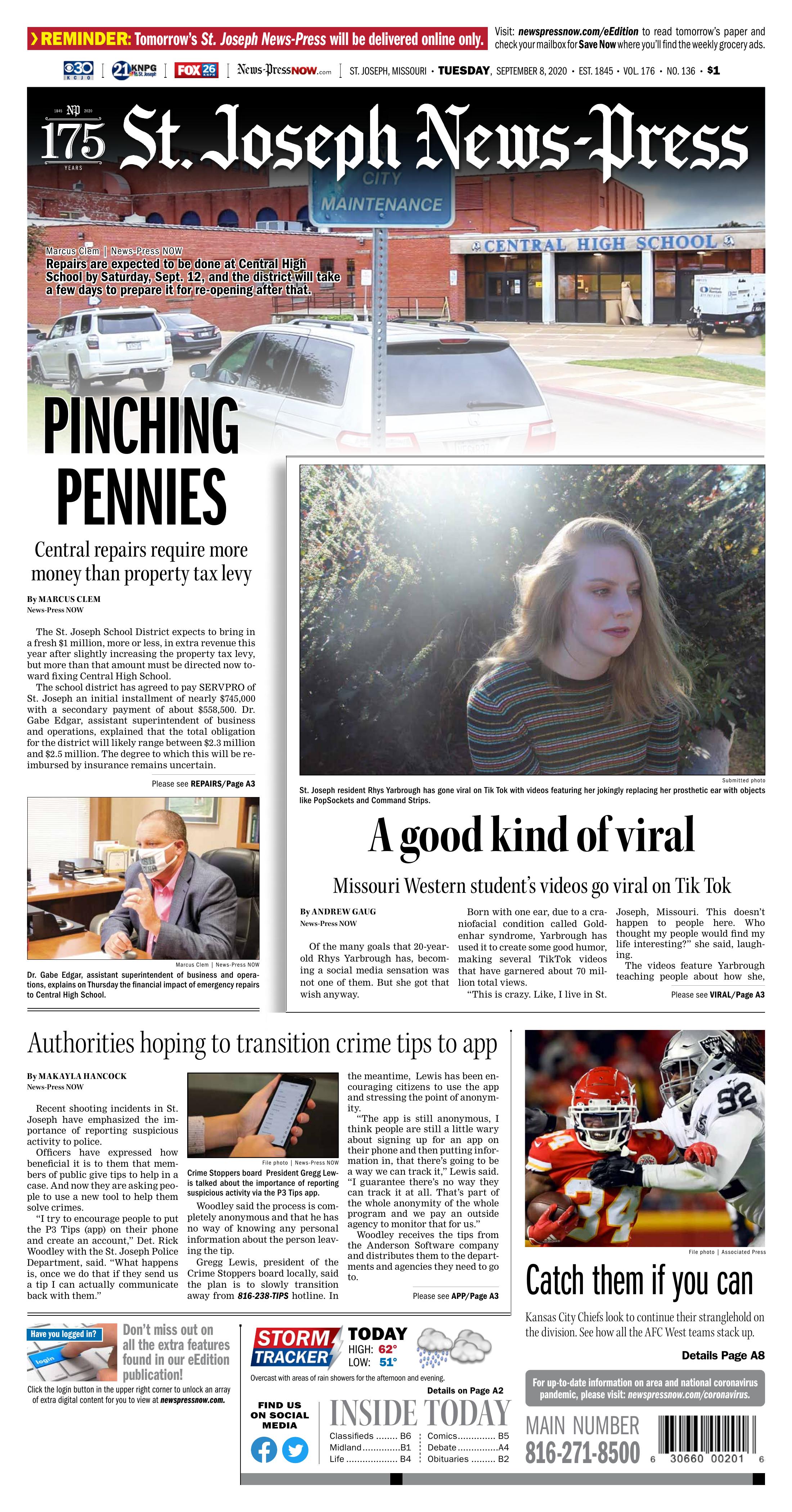