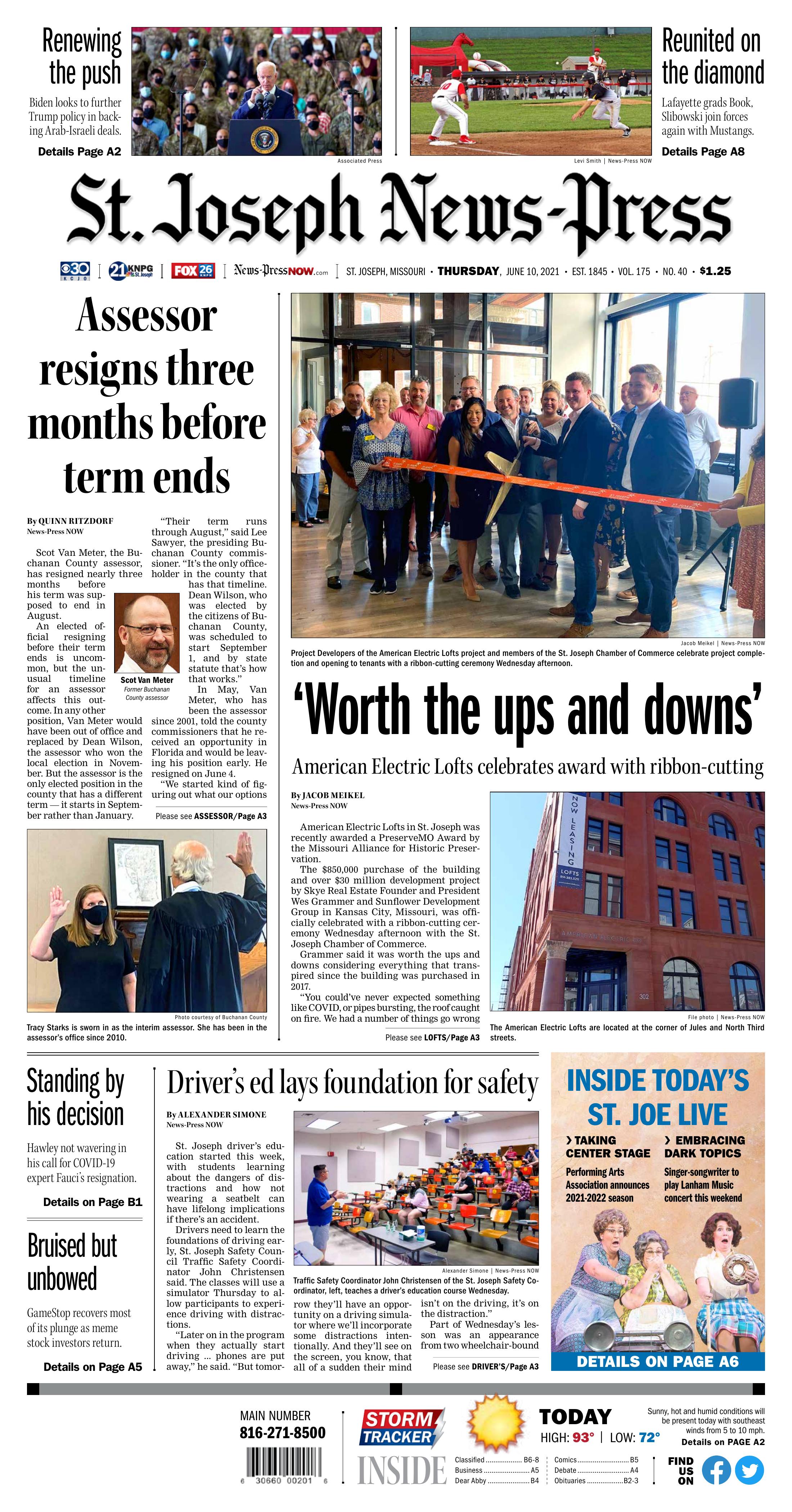 Scot Van Meter, who has been the Buchanan County assessor since 2001, has resigned. He will be replaced by Tracy Starks as interim assessor.

Scot Van Meter, the Buchanan County assessor, has resigned nearly three months before his term was supposed to end in August.

An elected official resigning before their term ends is uncommon, but the unusual timeline for an assessor affects this outcome. In any other position, Van Meter would have been out of office and replaced by Dean Wilson, the assessor who won the local election in November. But the assessor is the only elected position in the county that has a different term — it starts in September rather than January.

“Their term runs through August,” said Lee Sawyer, the presiding Buchanan County commissioner. “It’s the only officeholder in the county that has that timeline. Dean Wilson, who was elected by the citizens of Buchanan County, was scheduled to start September 1, and by state statute that’s how that works.”

In May, Van Meter, who has been the assessor since 2001, told the county commissioners that he received an opportunity in Florida and would be leaving his position early. He resigned on June 4.

“We started kind of figuring out what our options would be within the state statutes,” Sawyer said. “What do you do when an assessor resigns prior to them being finished and those kinds of things? So we did the research.”

The commissioners named Tracy Starks, the chief deputy in the assessor’s office, interim assessor for the next month. Starks has been in the department since 2010. 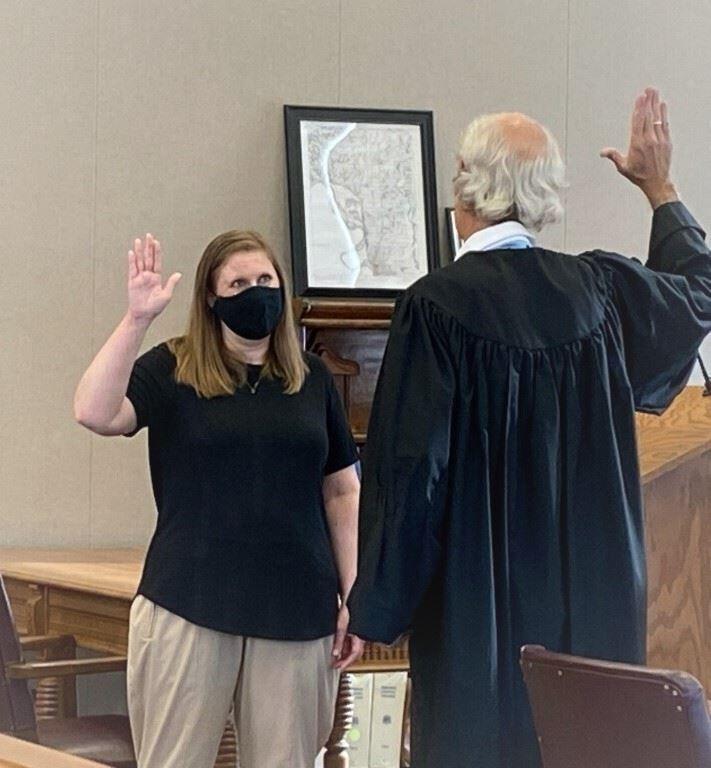 Tracy Starks is sworn in as the interim assessor. She has been in the assessor’s office since 2010.

“Tracy is very capable, she knows what goes on in the office,” Sawyer said. “She’s been in that office since 2010 in various capacities. She’s very familiar with the office and a smart young lady. We’re excited to have her there for the next month.”

Wilson, the elected assessor, has agreed to begin his term early. He will start on July 6. Sawyer called the governor’s office to make sure Mike Parson agreed with the change, as he has the right to appoint somebody. He concurred with the decision.

During this transition, there are some changes that need to be made. The assessor’s office has a couple open positions. The county wants to fill those and will give Wilson the final say once he begins in July.

“There’s going to be a search process that human resources will be helping the assessor’s office with,” Sawyer said. “The plan is that once Dean comes in and gets on board to kind of help make those hiring decisions.”

Project Developers of the American Electric Lofts project and members of the St. Joseph Chamber of Commerce celebrate project completion and opening to tenants with a ribbon-cutting ceremony Wednesday afternoon.

American Electric Lofts in St. Joseph was recently awarded a PreserveMO Award by the Missouri Alliance for Historic Preservation.

The $850,000 purchase of the building and over $30 million development project by Skye Real Estate Founder and President Wes Grammer and Sunflower Development Group in Kansas City, Missouri, was officially celebrated with a ribbon-cutting ceremony Wednesday afternoon with the St. Joseph Chamber of Commerce.

Grammer said it was worth the ups and downs considering everything that transpired since the building was purchased in 2017.

State and federal historic tax credits helped maintain many of the timeless features of the buildings. As Grammer looks back on the project from what it was in the beginning to what the lofts have transformed into, he considers it “night and day.”

“This building was built in 1892. It had completely deteriorated for the most part. We pumped $36 million into it, which is a lot and without historic tax credits and the support of St. Joe, it wouldn’t be possible,” said Grammer.

American Electric Lofts currently sits at a 50% lease rate and features over 140 spaces for rent.

The lofts also welcomed a local coffee business, Hazel’s Coffee & Roasting Company, to the base floor of the building as the business opened their location in the city.

St. Joseph driver’s education started this week, with students learning about the dangers of distractions and how not wearing a seatbelt can have lifelong implications if there’s an accident.

“Later on in the program when they actually start driving ... phones are put away,” he said. “But tomorrow they’ll have an opportunity on a driving simulator where we’ll incorporate some distractions intentionally. And they’ll see on the screen, you know, that all of a sudden their mind isn’t on the driving, it’s on the distraction.”

Part of Wednesday’s lesson was an appearance from two wheelchair-bound individuals. They talked with students about the extreme consequences when they got into accidents while not wearing seat belts. Many people “usually” wear a seatbelt, until the day they’re paralyzed in an accident without one on, the presenters said.

“There’s a likelihood that they have some experience or some knowledge, or know someone that’s been impacted or affected by a traffic crash,” he said. “You know, maybe they’ve experienced something like that. I don’t ask that, but they understand that.”

Savannah 15-year-old Kendalyn Cabrera is enjoying the class so far but expected it to be more hands-on in the early stages, she said. The thing she feels most apprehensive about, though, is to start driving at higher speeds.

“Just don’t be so tense, like, while driving because if you’re tense, you’ll tend to jerk things,” she said. “And if you jerk things, you could get off-track.”

There are around 45 teenagers split between two June courses, and the same number participating in July, Christensen said.