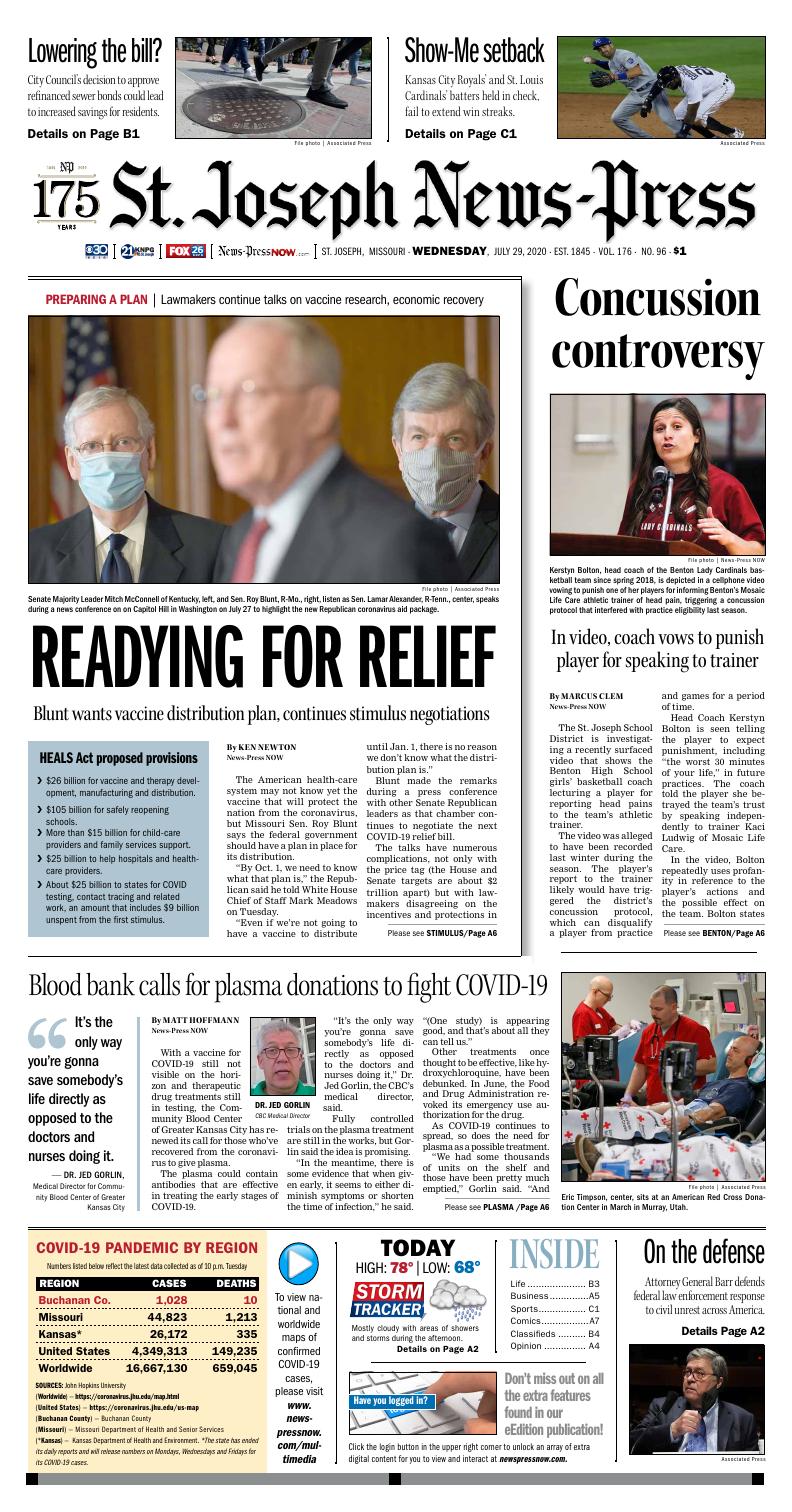 The American health-care system may not know yet the vaccine that will protect the nation from the coronavirus, but Missouri Sen. Roy Blunt says the federal government should have a plan in place for its distribution.

“By Oct. 1, we need to know what that plan is,” the Republican said he told White House Chief of Staff Mark Meadows on Tuesday.

“Even if we’re not going to have a vaccine to distribute until Jan. 1, there is no reason we don’t know what the distribution plan is.”

Blunt made the remarks during a press conference with other Senate Republican leaders as that chamber continues to negotiate the next COVID-19 relief bill.

The talks have numerous complications, not only with the price tag (the House and Senate targets are about $2 trillion apart) but with lawmakers disagreeing on the incentives and protections in the package.

Chairman of the Appropriations subcommittee that provides funding for federal health programs, the Missouri senator has helped craft some of the bill’s provisions on testing and continued research into a vaccine.

After a meeting with Meadows and Treasury Secretary Steven Mnuchin on Tuesday, Blunt said the fight against the virus and the fight to save the American economy are intertwined.

“So we’ve got the money there, but we’ve also got language in this bill that requires Health and Human Services to quickly get about the business of determining the priority of treatments, tests and vaccines, determining what’s the best way we can get that vaccine available when it is available.”

Called the HEALS Act, the measure has a number of provisions that Blunt touted, including:

$105 billion for safely reopening schools, with $70 billion for elementary and secondary education, $29 billion for higher education and $5 billion in flexible funding for governors.

More than $15 billion for child-care providers and family services support.

About $25 billion to states for COVID testing, contact tracing and related work, an amount that includes $9 billion unspent from the first stimulus.

$26 billion for vaccine and therapy development, manufacturing and distribution.

The behind-closed-doors negotiations took place as partisan finger-pointing surged in the public spaces of the U.S. Capitol. One item of contention involves the amount of unemployment assistance available to those who lost jobs because of the pandemic.

Payments in the earlier stimulus round amounted to $600 a week on top of regular jobless benefits. That provision will expire this week without congressional intervention. Republicans want a lesser amount.

“We should not be redistributing money away from the essential workers who have remained at their posts,” Senate Majority Leader Mitch McConnell, a Kentucky Republican, said Tuesday.

“We should not be taxing somebody who has been stocking shelves for months so the government can pay her neighbor more than she makes to sit at home.”

The minority leader of the Senate, Chuck Schumer, a New York Democrat, said the unemployment payments have played an essential role in shoring up the economy.

Kerstyn Bolton, head coach of the Benton Lady Cardinals basketball team since spring 2018, is depicted in a cellphone video vowing to punish one of her players for informing Benton’s Mosaic Life Care athletic trainer of head pain, triggering a concussion protocol that interfered with practice eligibility last season.

The St. Joseph School District launched an investigation in late July into a video surfaced from last winter that shows the Benton High School girls’ basketball coach lecturing a player for reporting head pains to the team’s athletic trainer. The coach has since resigned.

The video is thought to have been recorded in the first week of January, during the season. The player’s report to the trainer likely would have triggered the district’s concussion protocol, which can disqualify a player from practice and games for a period of time.

In the video, Head Coach Kerstyn Bolton is seen telling the player to expect punishment, including “the worst 30 minutes of your life,” in future practices. The coach told the player she betrayed the team’s trust by speaking independently to trainer Kaci Ludwig of Mosaic Life Care.

Bolton repeatedly uses profanity in reference to the player’s actions and the possible effect on the team. Bolton states that as a consequence of the report to Ludwig, the player will be ineligible for play or practice for five days. The player is not being identified by News-Press NOW in light of health and privacy concerns, as well as the player’s status as a minor.

“I’m not saying you didn’t get elbowed in your head,” Bolton tells the player. “Your head probably does hurt. But enough to be out for five days? No. No. No. I’m not gonna dig into that. I’m not gonna, I’m not gonna buy it, and you’re gonna have to earn some trust back for some people. Which is gonna suck. You understand?”

The video appears to have been recorded covertly by cellphone. The player is only visible for a portion of the video while Bolton’s head and neck are visible during most of it. Bolton did not respond to a request for comment.

Dr. Gabe Edgar, assistant superintendent of business and operations for the school district, said on July 28 that the district received a copy of the video in recent days. No knowledge of the video on the part of the district had existed before that point, Edgar said.

As the situation concerns a “personnel matter,” Edgar said, any recommendation for action, if it occurs, will be subject to approval by the Board of Education, which next meets on Monday, Aug. 24. However, the board has the authority to conduct a special meeting before that date if its members deem it necessary.

With a vaccine for COVID-19 still not visible on the horizon and therapeutic drug treatments still in testing, the Community Blood Center of Greater Kansas City has renewed its call for those who’ve recovered from the coronavirus to give plasma.

The plasma could contain antibodies that are effective in treating the early stages of COVID-19.

“It’s the only way you’re gonna save somebody’s life directly as opposed to the doctors and nurses doing it,” Dr. Jed Gorlin, the CBC’s medical director, said.

Fully controlled trials on the plasma treatment are still in the works, but Gorlin said the idea is promising.

“In the meantime, there is some evidence that when given early, it seems to either diminish symptoms or shorten the time of infection,” he said. “(One study) is appearing good, and that’s about all they can tell us.”

Other treatments once thought to be effective, like hydroxychloroquine, have been debunked. In June, the Food and Drug Administration revoked its emergency use authorization for the drug.

As COVID-19 continues to spread, so does the need for plasma as a possible treatment.

“We had some thousands of units on the shelf and those have been pretty much emptied,” Gorlin said. “And frankly, the current increased demand, we need more.”

According to Gorlin, the federal government also has called for a “strategic national stockpile” of COVID-19 plasma. The blood product could last up to a year on the shelf, he said.

“In fact, the more significant infection you had, the better the level of antibody,” Gorlin said. “So we’re not interested in people that had asymptomatic infections, they have pretty low antibody level.”

In order to donate, prospective donors must be at least 14 days recovered from the virus. Participants must provide proof of a positive COVID-19 test, whether it’s an antibody test or other type of swab.

To sign up, visit savealifenow.org and search for “COVID-19.” 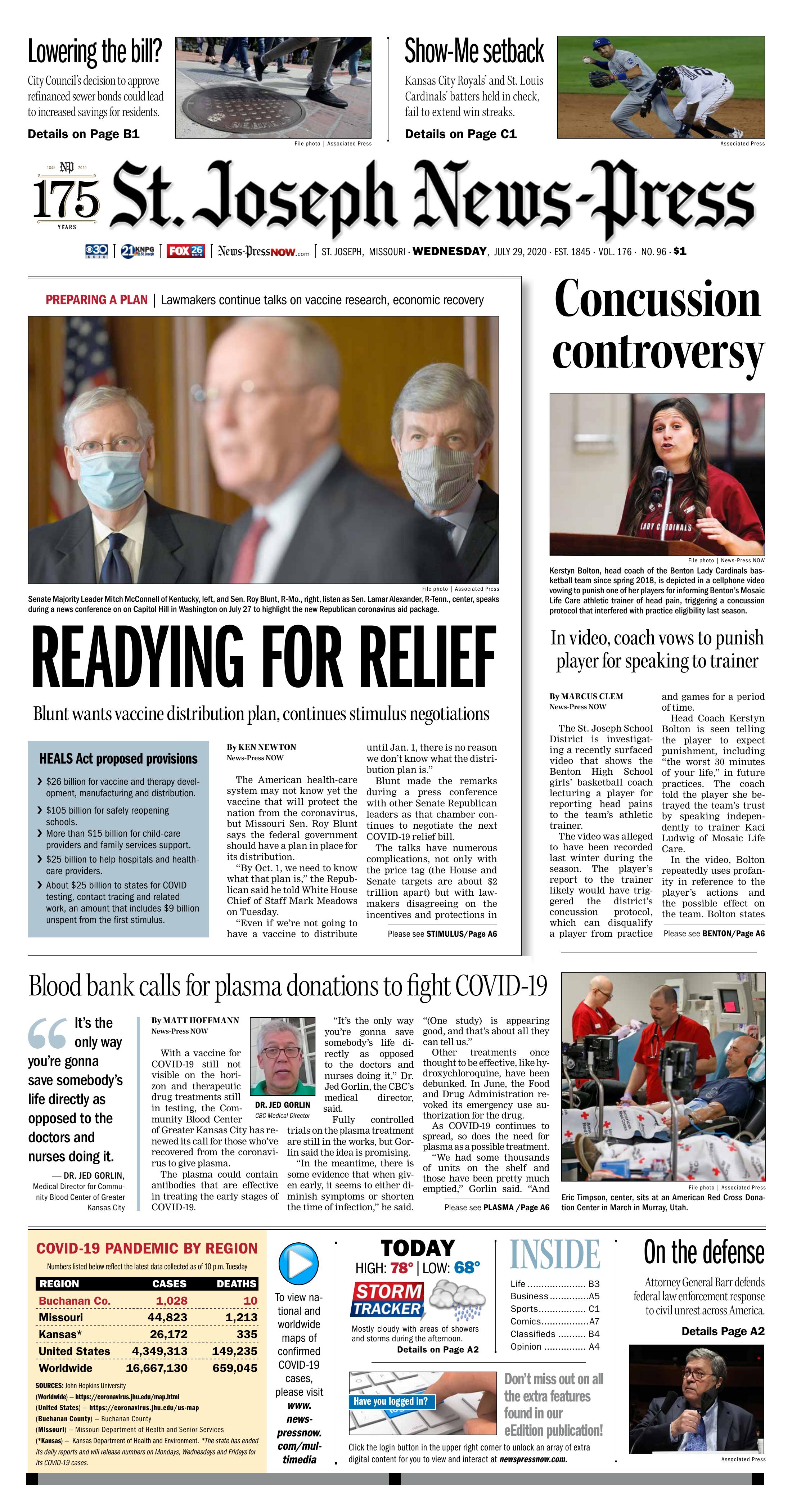