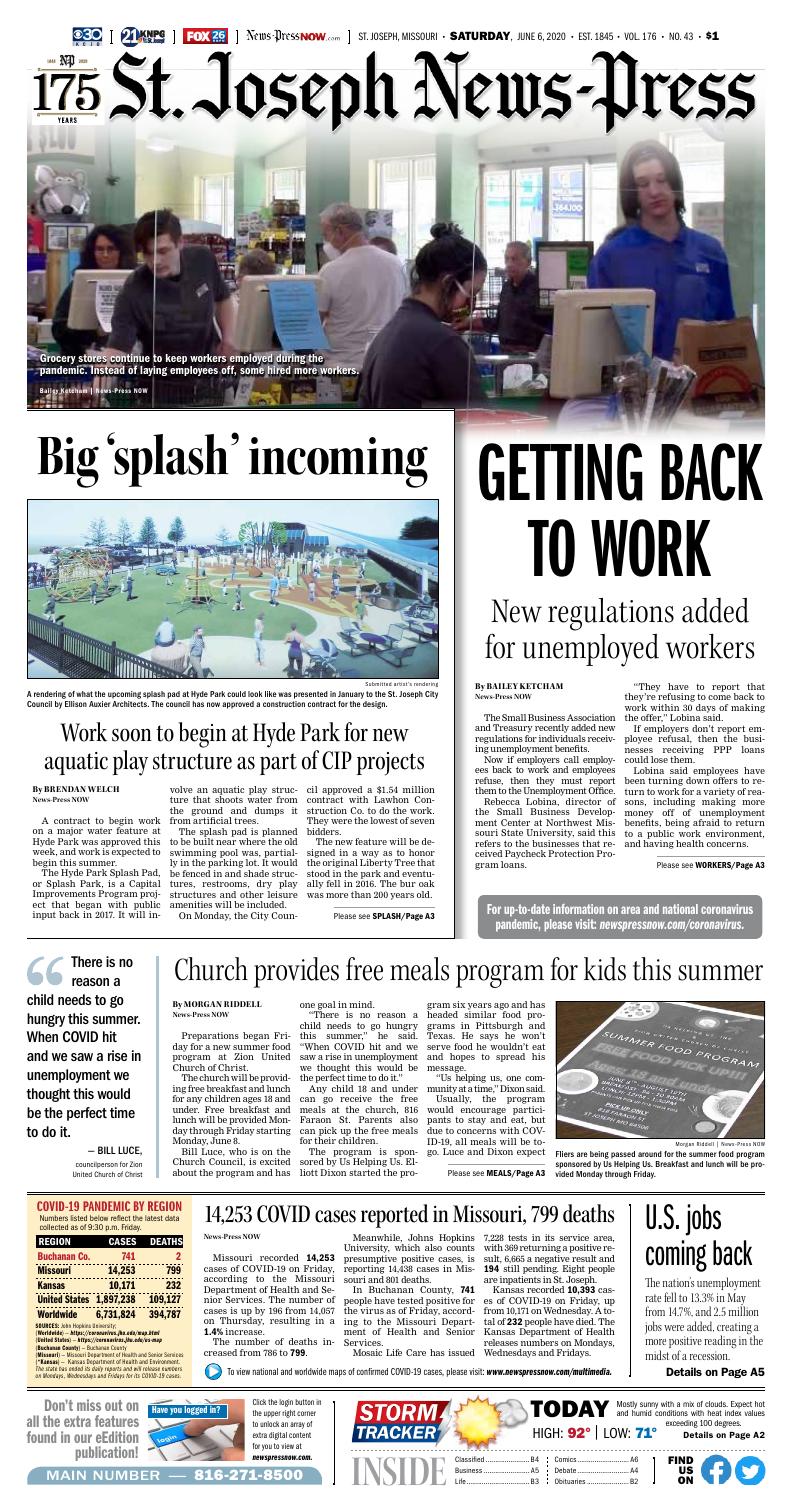 Grocery stores continue to keep workers employed during the pandemic. Instead of laying employees off, some hired more workers.

Now if employers call employees back to work and employees refuse, then they must report them to the Unemployment Office.

“They have to report that they’re refusing to come back to work within 30 days of making the offer,” Lobina said.

If employers don’t report employee refusal, then the businesses receiving PPP loans could lose them.

Lobina said employees have been turning down offers to return to work for a variety of reasons, including making more money off of unemployment benefits, being afraid to return to a public work environment, and having health concerns.

Individuals receiving unemployment under the CARES Act were given $600 per week if approved by their state for unemployment insurance. If employees refuse to return, then they forfeit eligibility for continued unemployment compensation.

Patt Lilly, St. Joseph Chamber of Commerce CEO, said when the first wave of closings hit and employers laid off employees, some people were making more than they might’ve while they were working.

“As employers began to call people back, they found that some people would rather stay on unemployment than come back to work,” Lilly said.

The unemployment rate in Buchanan County was low before the pandemic and Lilly said some retailers that laid off employees lost them for good.

”They had good employees that once they laid them off, they went and got another job,” Lilly said.

Lobina said employers that have workers concerned about their safety at work or are slow in business right now have given employees space.

”They’re saying if you want reduced hours or just to work from home for a few hours,” Lobina said. “Employers here are allowing that space for employees to feel comfortable.”

However, Lobina said that businesses she’s been working with have employees who want to return to work and start getting back to the new normal.

Anyone wanting more information on the PPP funds or needing unemployment refusal forms can go to labor.mo.gov or go to www.nwmissouri.edu/services/sbtdc.

A rendering of what the upcoming splash pad at Hyde Park could look like was presented in January to the St. Joseph City Council by Ellison Auxier Architects. The council has now approved a construction contract for the design.

A contract to begin work on a major water feature at Hyde Park was approved this week, and work is expected to begin this summer.

The Hyde Park Splash Pad, or Splash Park, is a Capital Improvements Program project that began with public input back in 2017. It will involve an aquatic play structure that shoots water from the ground and dumps it from artificial trees.

The splash pad is planned to be built near where the old swimming pool was, partially in the parking lot. It would be fenced in and shade structures, restrooms, dry play structures and other leisure amenities will be included.

On Monday, the City Council approved a $1.54 million contract with Lawhon Construction Co. to do the work. They were the lowest of seven bidders.

The new feature will be designed in a way as to honor the original Liberty Tree that stood in the park and eventually fell in 2016. The bur oak was more than 200 years old.

“There was a lot of thought, a lot of creativity put into the design of this,” Director of Parks, Recreation and Civic Facilities Chuck Kempf said. “We’re going to have the splash area look like an oak leaf. We were trying to kind of recognize the loss of the Liberty Tree that we had in Hyde Park.”

The park also will see faux stumps that children can play on and manmade “oaks” that will dump water.

Kemp said the project is currently in a phase of acquiring materials, and construction may not begin for a couple of months.

“I signed the Notice to Proceed this morning, which kind of gets the ball rolling,” Kempf said on Friday. “That will kind of kick off what they’ll be able to start doing.”

He said parking spaces will be built to make up for spaces that will be lost to the new pad, but the park should end up with more spaces than it started with.

Kemp said the splash park, which will have no standing water to cause drowning concerns, will be a more relaxing opportunity for parents and guardians who take children to play.

The project is the next step in the renovation of the park after the baseball fields were competed in 2017. It is a two-part phase of the project that will also likely see a zero-depth entry pool and other amenities in the area.

The budget for both parts — the splash pad and the next feature in that area of the park — is set at $2.5 million, with the possibility of an extra $500,000 if other CIP projects come in under budget.

Kemp said the splash pad should be open next spring and will be free to use during open hours.

Fliers are being passed around for the summer food program sponsored by Us Helping Us. Breakfast and lunch will be provided Monday through Friday.

Bill Luce, who is on the Church Council, is excited about the program and has one goal in mind.

“There is no reason a child needs to go hungry this summer,” he said. “When COVID hit and we saw a rise in unemployment we thought this would be the perfect time to do it.”

The program is sponsored by Us Helping Us. Elliott Dixon started the program six years ago and has headed similar food programs in Pittsburgh and Texas. He says he won’t serve food he wouldn’t eat and hopes to spread his message.

“Us helping us, one community at a time,” Dixon said.

Usually, the program would encourage participants to stay and eat, but due to concerns with COVID-19, all meals will be to-go. Luce and Dixon expect a few cold meals but hope they can provide food that can be warmed up also.

Luce is excited for people to show up and hopes this could continue beyond the summer program.

“We are focusing on the summer but before you know it, it’ll be time for school and after-school programs kicking in so we want to make this a long-term thing,” Luce said.

Us Helping Us has a two-tiered program. First, two meals for children during the summer. Second, is a snack and dinner as an after-school program.

Luce said they have had a few volunteers but are continuing to look for more.

This is the first time Zion United Church of Christ is doing the program and it is working to get the word out for the program to start Monday.

Missouri recorded 14,253 cases of COVID-19 on Friday, according to the Missouri Department of Health and Senior Services. The number of cases is up by 196 from 14,057 on Thursday, resulting in a 1.4% increase.

In Buchanan County, 741 people have tested positive for the virus as of Friday, according to the Missouri Department of Health and Senior Services.

Mosaic Life Care has issued 7,228 tests in its service area, with 369 returning a positive result, 6,665 a negative result and 194 still pending. Eight people are inpatients in St. Joseph.

Kansas recorded 10,393 cases of COVID-19 on Friday, up from 10,171 on Wednesday. A total of 232 people have died. The Kansas Department of Health releases numbers on Mondays, Wednesdays and Fridays. 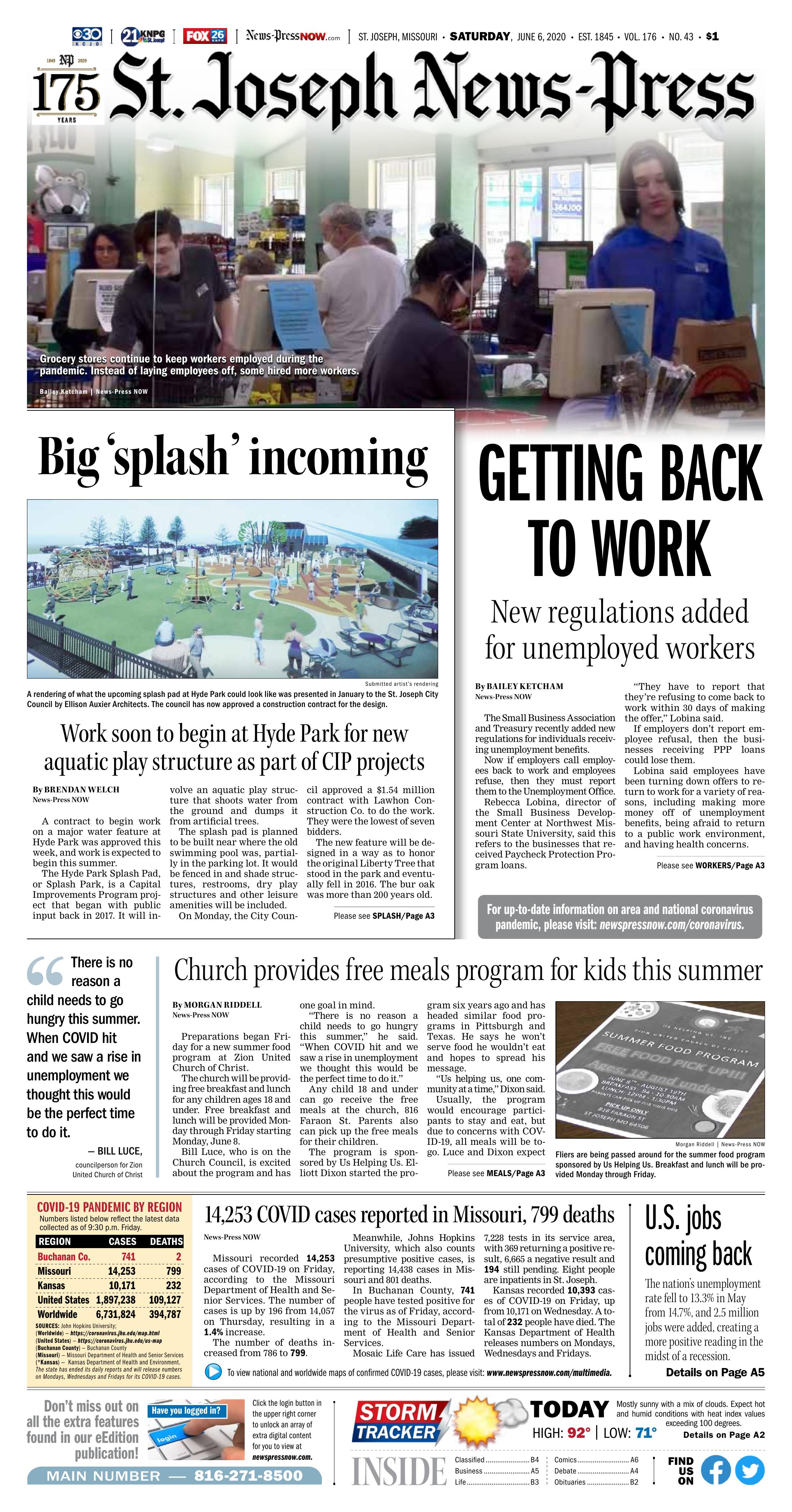