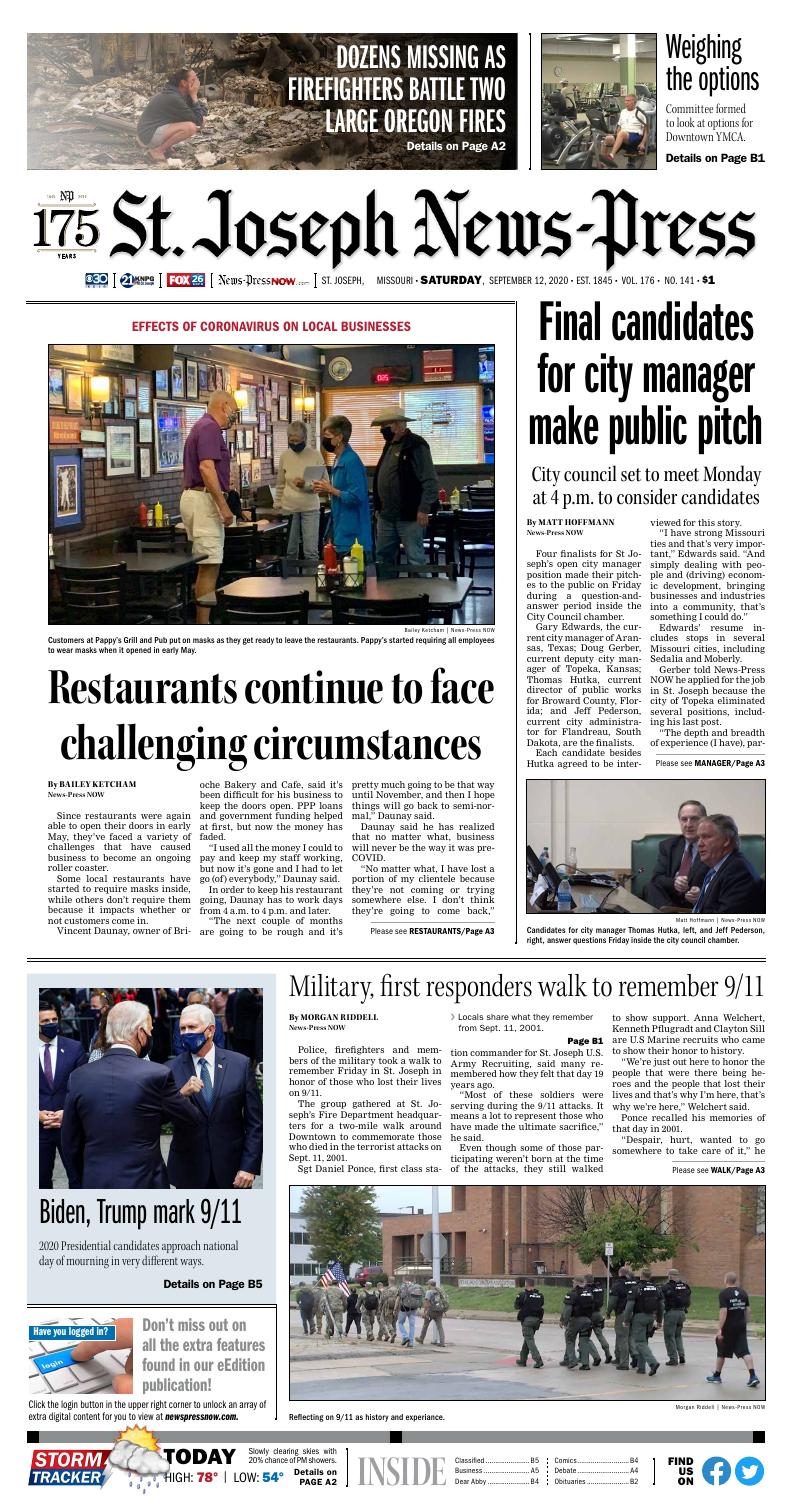 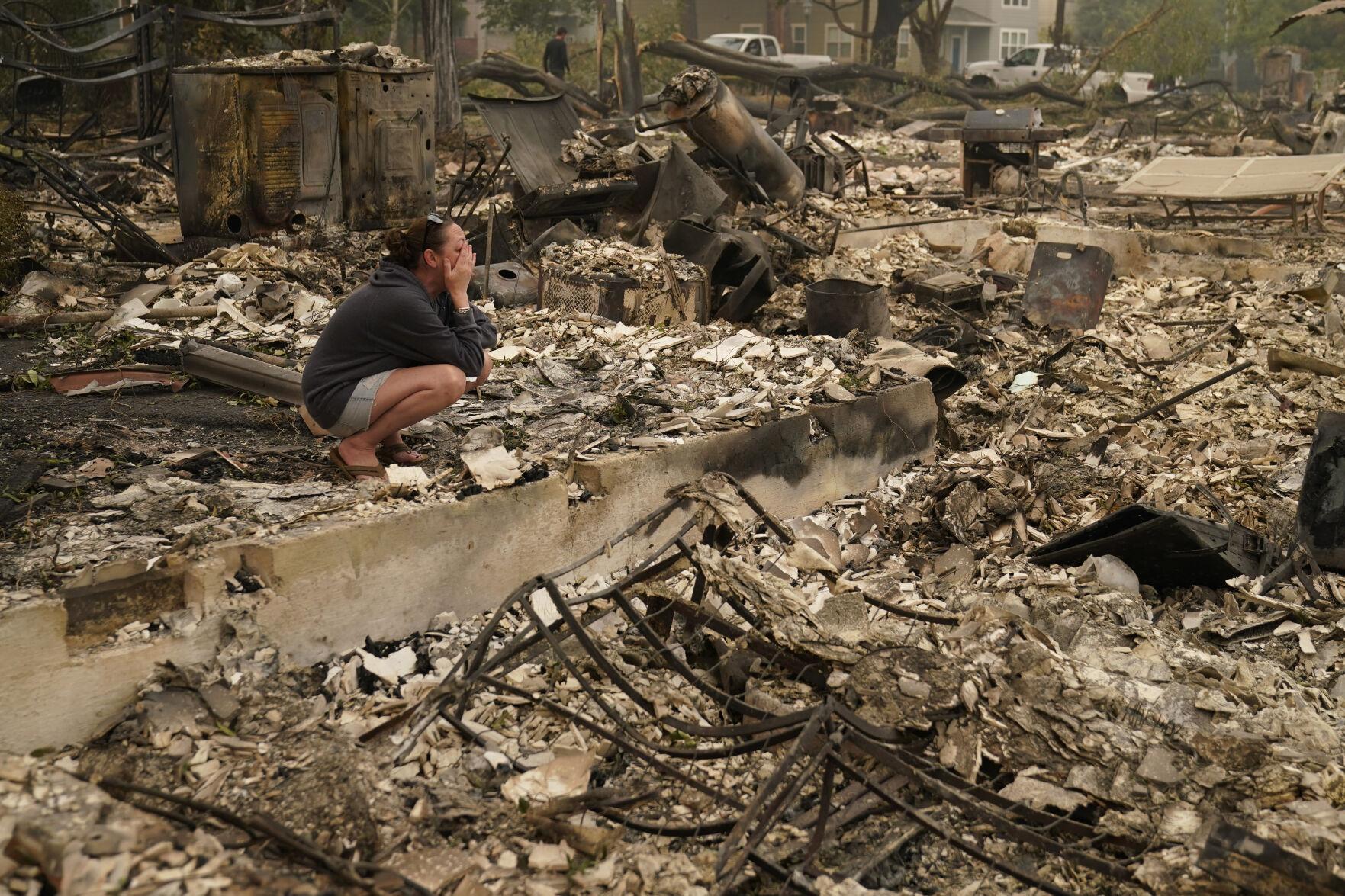 Desiree Pierce cries as she visits her home destroyed by the Almeda Fire, Friday, Sept. 11, 2020, in Talent, Ore. “I just needed to see it, to get some closure,” said Pierce.

Customers at Pappy’s Grill and Pub put on masks as they get ready to leave the restaurants. Pappy’s started requiring all employees to wear masks when it opened in early May.

Brioche Bakery and Cafe offers indoor and outdoor seating to be more versatile for customers. Owner Vincent Daunay said he feels like he’s lost some customers for good due to COVID.

Since restaurants were again able to open their doors in early May, they’ve faced a variety of challenges that have caused business to become an ongoing roller coaster.

Some local restaurants have started to require masks inside, while others don’t require them because it impacts whether or not customers come in.

Vincent Daunay, owner of Brioche Bakery and Cafe, said it’s been difficult for his business to keep the doors open. PPP loans and government funding helped at first, but now the money has faded.

“I used all the money I could to pay and keep my staff working, but now it’s gone and I had to let go (of) everybody,” Daunay said.

In order to keep his restaurant going, Daunay has to work days from 4 a.m. to 4 p.m. and later.

“The next couple of months are going to be rough and it’s pretty much going to be that way until November, and then I hope things will go back to semi-normal,” Daunay said.

Daunay said he has realized that no matter what, business will never be the way it was pre-COVID.

“No matter what, I have lost a portion of my clientele because they’re not coming or trying somewhere else. I don’t think they’re going to come back,” Daunay said.

Steve Margulies, owner of Pappy’s Grill and Pub, said it took a while for his customers to come back and, even then, after a few weeks it dropped back down. He said his business is at 20% of what the restaurant is typically at during this time of year.

“We knew our following was so strong based on the takeout, but we don’t really know why people weren’t coming inside in the same amount other than for COVID,” Margulies said.

All Pappy’s employees wear masks and Margulies said that’s been hard to get used to for some. He said he’s surprised not all St. Joseph restaurants require employees to wear them.

“The virus is still as strong as it ever was, but it’s people’s choices and you can wear one and not wear one,” Margulies said.

As a small business it’s difficult to keep doors open all the time, but Margulies wants to do everything he can to make sure his never close.

“If my cooks caught the virus and I had to shut down for two weeks, I’m done, Margulies said. “I have 16 other employees and what are they going to do, because they’re living check to check,” Margulies said.

Margulies and Daunay both encourage the community to keep supporting local restaurants in order to keep the small businesses alive.

“We live week to week based on how much business we have and it can be really hard,” Margulies said.

Both restaurants know that despite a possible vaccine or decrease in COVID numbers, business will never be the same and they will have to continue to adapt.

Reflecting on 9/11 as history and experiance.

Police, firefighters and members of the military took a walk to remember Friday in St. Joseph in honor of those who lost their lives on 9/11.

The group gathered at St. Joseph’s Fire Department headquarters for a two-mile walk around Downtown to commemorate those who died in the terrorist attacks on Sept. 11, 2001.

“Most of these soldiers were serving during the 9/11 attacks. It means a lot to represent those who have made the ultimate sacrifice,” he said.

Even though some of those participating weren’t born at the time of the attacks, they still walked to show support. Anna Welchert, Kenneth Pflugradt and Clayton Sill are U.S Marine recruits who came to show their honor to history.

Ponce recalled his memories of that day in 2001.

“Despair, hurt, wanted to go somewhere to take care of it,” he said. “All the families left behind, and all the firefighters, police that worked effortlessly to stand back up the United States.”

Members of the younger generation listened to those stories and wanted to show their support in honoring those who were there.

“It’s more that we had to learn through people, through the past, history books, what we’ve seen on TV. That’s how we learned about all this and it really brought the community together during that period of time,” Sill said.

“I feel like it’s a very memorable day,” Pflugradt said. “I can’t remember what I ate yesterday, but my dad can remember that very day, exactly what he was doing, exactly what was going on down to the minute it happened.” 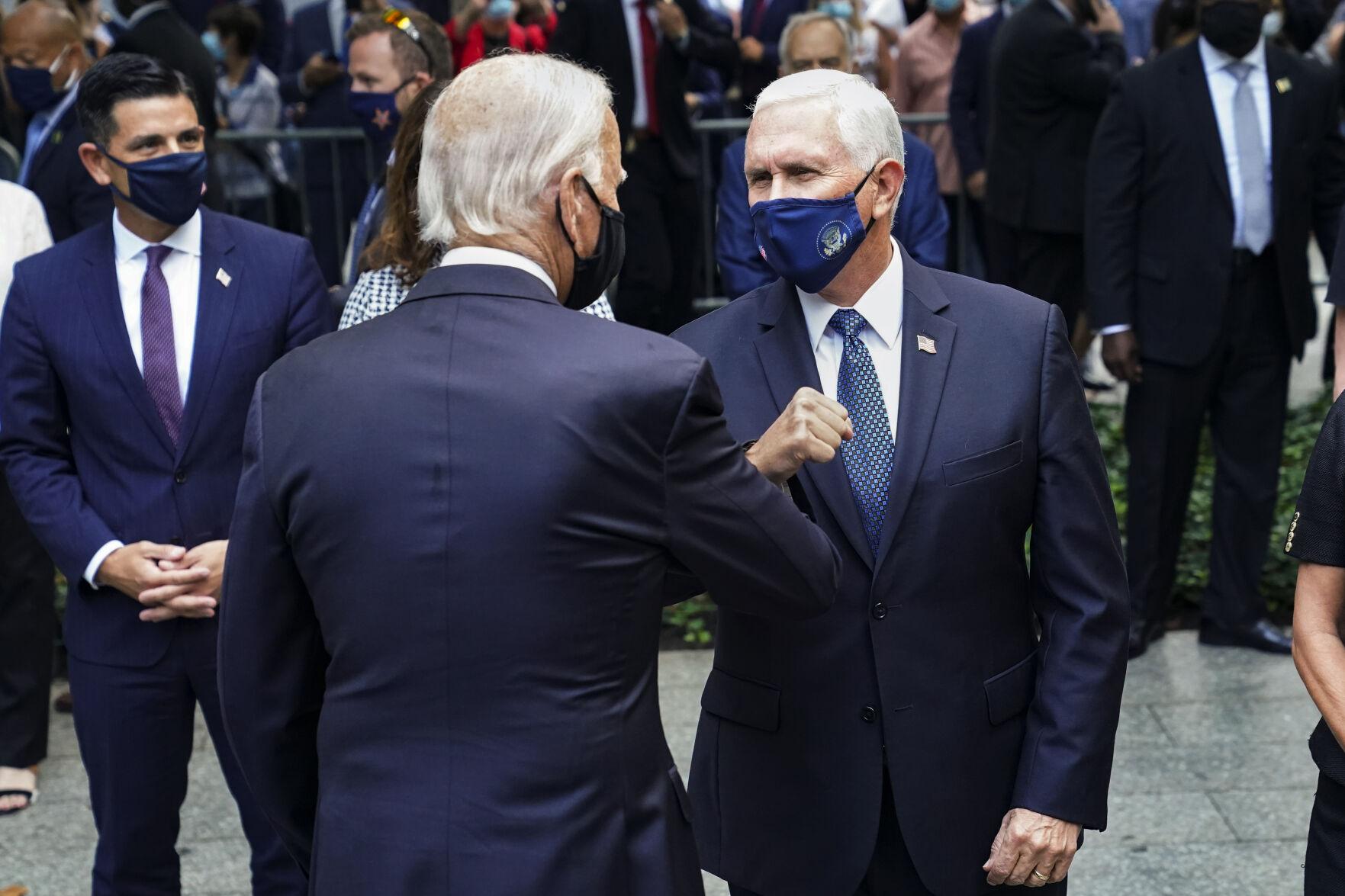 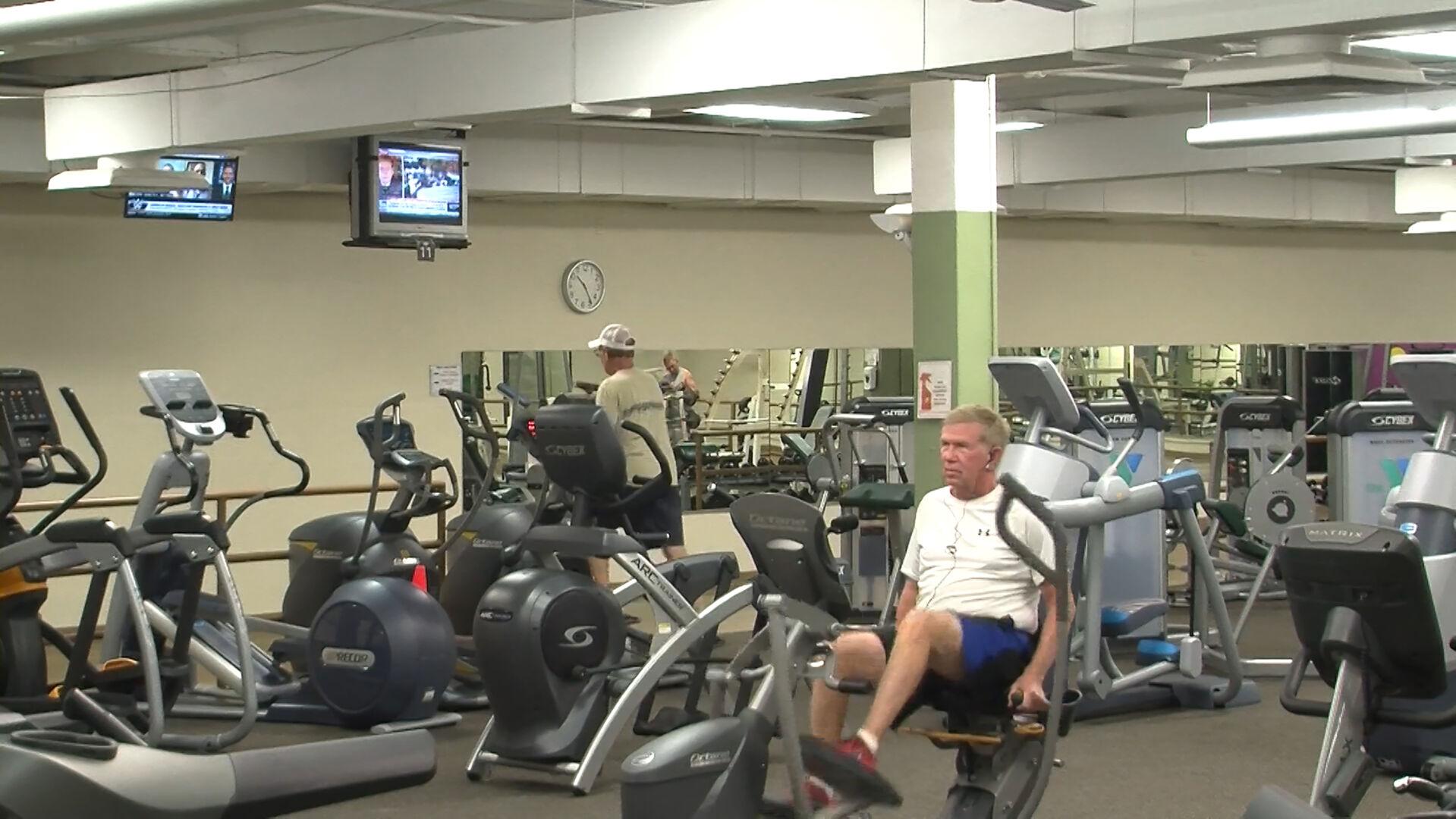 The Downtown YMCA will be closing the doors, but a group of people expressed concern to the City Council, and the council has created a committee.

Four finalists for St Joseph’s open city manager position made their pitches to the public on Friday during a question-and-answer period inside the City Council chamber.

Each candidate besides Hutka agreed to be interviewed for this story.

“I have strong Missouri ties and that’s very important,” Edwards said. “And simply dealing with people and (driving) economic development, bringing businesses and industries into a community, that’s something I could do.”

Gerber told News-Press NOW he applied for the job in St. Joseph because the city of Topeka eliminated several positions, including his last post.

“The depth and breadth of experience (I have), particularly in a city similar to St. Joe and some of the same issues and concerns with opportunities and challenges,” Gerber said. “I think that makes me pretty well qualified.”

Pederson said he has experience ranging from his current post as a city administrator of a small town in South Dakota to larger cities like Paducah, Kentucky, where he served as city manager.

“I think my experience in dynamic communities ranging up in population to 50,000 (sets me apart),” Pederson said. “And I’ve always been a city manager, I’ve never been an assistant, so I’ve always been the person on point.”

Candidates told News-Press NOW no timeline on the next steps in the hiring process was given to them. St. Joseph Police Chief Chris Connally has been acting as city manager after the departure of former City Manager Bruce Woody.

The city council is set to meet on Monday at 4 p.m. to consider the candidates. 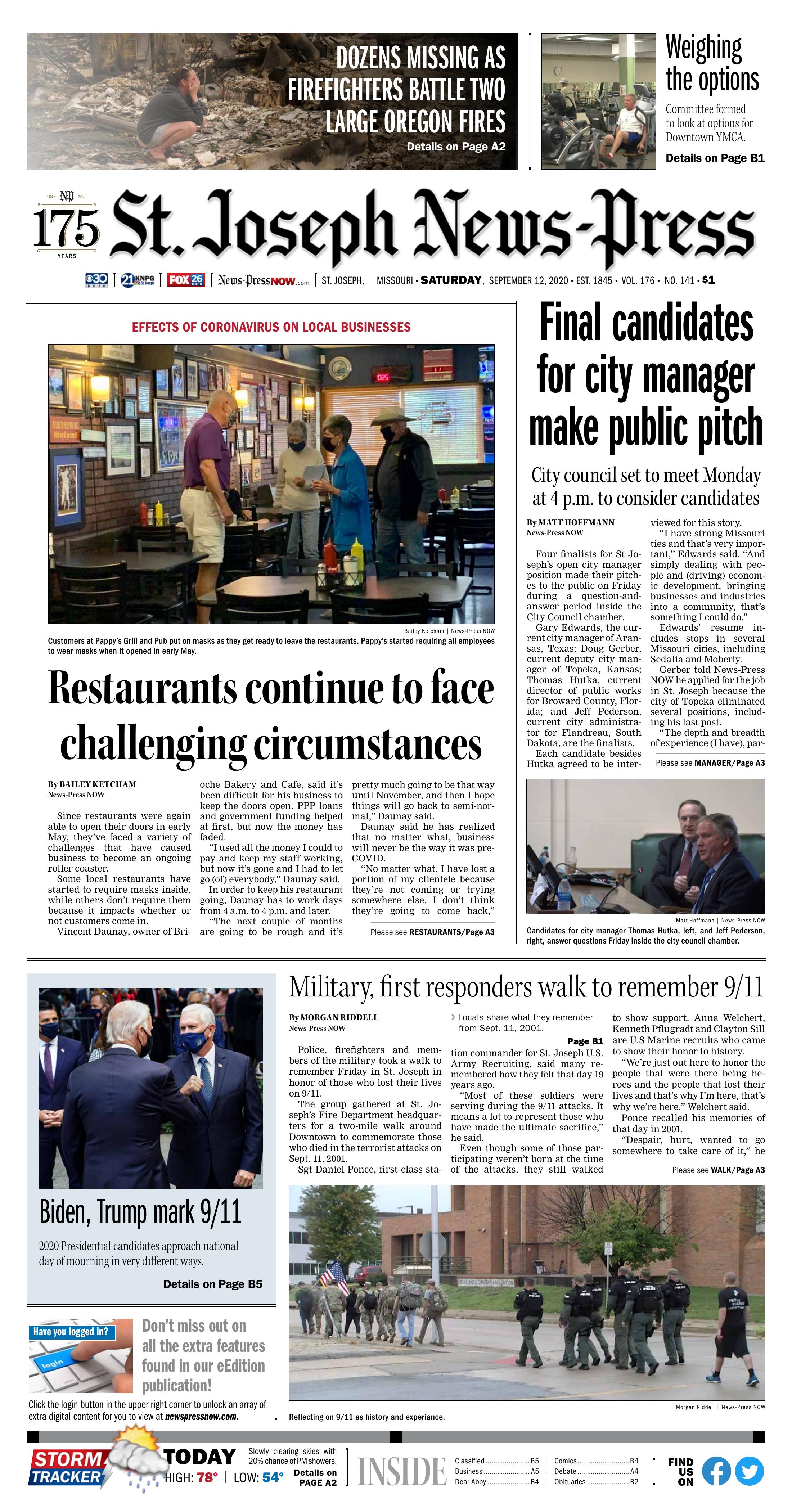