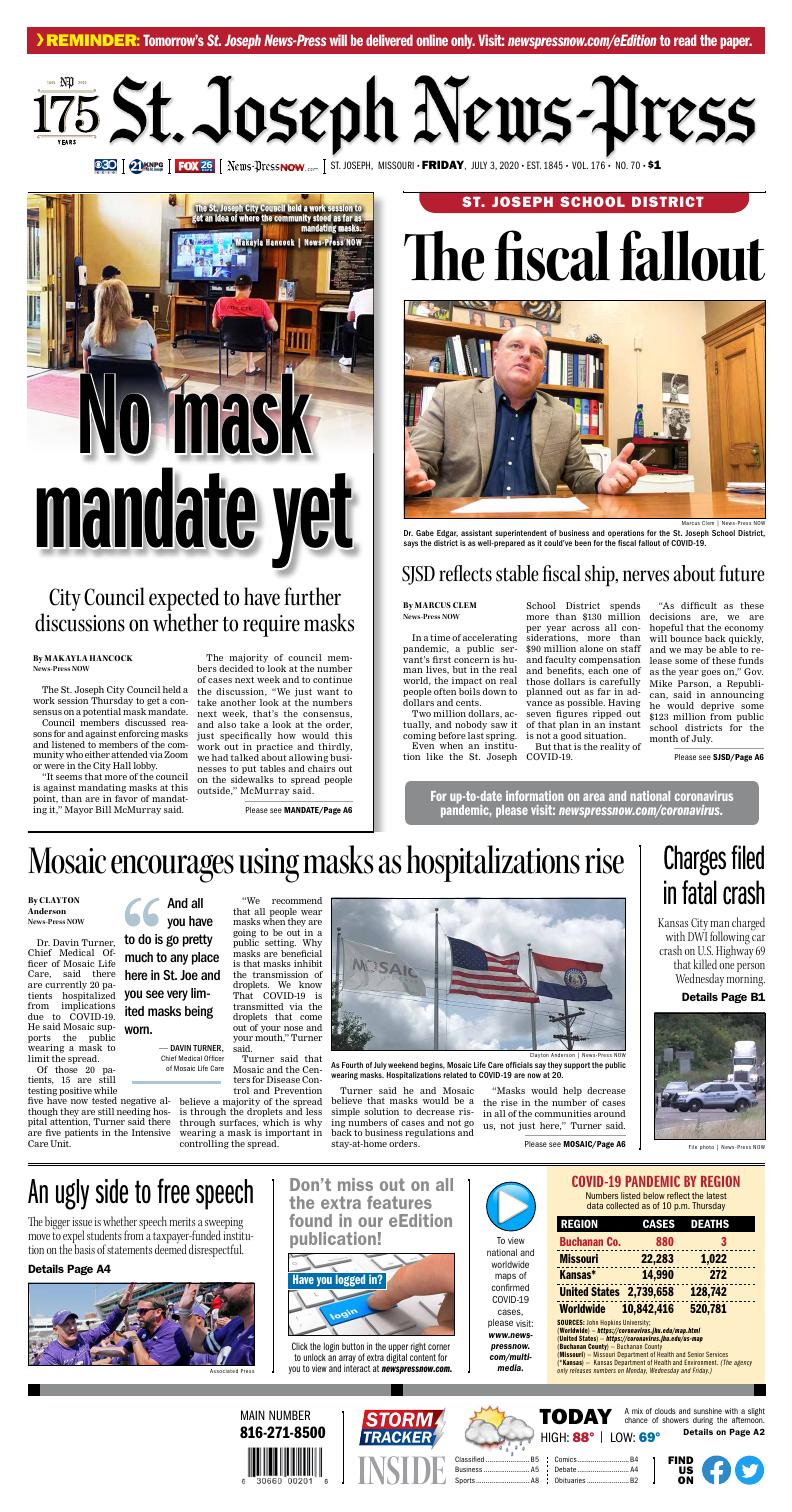 The St. Joseph City Council held a work session to get an idea of where the community stood as far as mandating masks.

The St. Joseph City Council held a work session Thursday to get a consensus on a potential mask mandate.

Council members discussed reasons for and against enforcing masks and listened to members of the community who either attended via Zoom or were in the City Hall lobby.

“It seems that more of the council is against mandating masks at this point, than are in favor of mandating it,” Mayor Bill McMurray said.

The majority of council members decided to look at the number of cases next week and to continue the discussion, “We just want to take another look at the numbers next week, that’s the consensus, and also take a look at the order, just specifically how would this work out in practice and thirdly, we had talked about allowing businesses to put tables and chairs out on the sidewalks to spread people outside,” McMurray said.

Before the work session, Councilman Brian Myers shared his thoughts on a mask mandate, “This city cannot afford to shut itself down again and go back to shelter-in-place. That has to be the absolute last option that would be exercised because there are businesses that simply would not recover from another shutdown.”

The citizens who attended the meeting at City Hall consisted of six people at City Hall and two through Zoom. Some of them were business owners who expressed concern over the mandate and overall wanted clarity of what it would look like.

A couple of bar owners feared that a mandate would hinder the number of customers and become difficult to enforce. Myers a business owner himself — one of which is a bar, said that even though it is an inconvenience, it is doable.

“I can tell you from firsthand experience after going to Kansas City and going to a restaurant and also a couple of breweries after their mandatory indoor mask requirement was put into place,” Myers said. “It’s really not that hard to navigate as a customer, I don’t think it’s going to be difficult to navigate as a business owner.”

Myers said three of the council members had felt the city reopened too soon and another member wanted masks to be a requirement when they did reopen.

McMurray said the hope is to not need a mandate, “I would strongly encourage everyone to wear the mask as recommended by the CDC, I mean, please do that. I’d much rather have people accept personal responsibility than have to write another ordinance.”

The City Council will hold another work session at 4 p.m. next Thursday, July 9 that can be attended through Zoom or going to the City Hall lobby.

Dr. Gabe Edgar, assistant superintendent of business and operations for the St. Joseph School District, says the district is as well-prepared as it could’ve been for the fiscal fallout of COVID-19.

Because the financial hit exceeds $2 million across fiscal years 2020 and 2021, the latter of which began on Wednesday, the St. Joseph School District will have no choice but to defer building maintenance as much as possible, Dr. Gabe Edgar says.

In a time of accelerating pandemic, a public servant’s first concern is human lives, but in the real world, the impact on real people often boils down to dollars and cents.

Two million dollars, actually, and nobody saw it coming before last spring.

Even when an institution like the St. Joseph School District spends more than $130 million per year across all considerations, more than $90 million alone on staff and faculty compensation and benefits, each one of those dollars is carefully planned out as far in advance as possible. Having seven figures ripped out of that plan in an instant is not a good situation.

But that is the reality of COVID-19.

“As difficult as these decisions are, we are hopeful that the economy will bounce back quickly, and we may be able to release some of these funds as the year goes on,” Gov. Mike Parson, a Republican, said in announcing he would deprive some $123 million from public school districts for the month of July.

Dr. Gabe Edgar is crossing his fingers that this prediction will pan out. As it is, he admits that this is the hardest work he’s ever done in more than 20 years in education. On Thursday, Edgar reflected confidence in the Parson administration, based on its transparency and engagement with local leaders as he perceives it.

Yet that confidence is beside the point, he emphasized to the Board of Education on June 22: The FY 2021 budget is founded on tenuous ground.

They will know, at least, about how things are at that particular moment in time. Most everything depends on how much the state restricts from the school budget in the future. If Parson realizes his goal of being able to restore state funding as the economy improves, things will be fine. If the SJSD budget keeps shedding $1 million, $2 million or more per month, we’re in for some hurt.

Is that the summation of the fiscal challenges ahead? No, not at all. Edgar also is bracing for a decline in enrollment by up to 500 children, from the more than 10,500 recorded last year, driven primarily by people taking their kids out of school for fear of the pandemic. The state will reduce its payments permanently, on top of the one-shot budget restrictions, for every child that is not on the rolls.

On top of that, in what Edgar described as a conservative estimate, as many as 10% of all SJSD taxpayers will not meet their property assessment obligations in the coming year, mainly because they are making less money, taking on debts they must pay sooner than they are required to pay their taxes, and in general suffering from fiscal insecurity.

“It’s a matter of not having enough money,” Edgar said. “It’s like, it’s like the state making cuts to us, right? I mean, personally, you have to cut things out, and for people that live week to week, it very well could catch up to you.”

Some 94% of taxpayers made their obligations in 2009 and 2010, in the teeth of what had been known as the Great Recession. This situation is likely worse. The hope is that it ultimately won’t be.

“We can be proactive, and hopefully we can take care of that through (staff) attrition, and retirements, and those types of things,” Edgar said. “So we won’t affect people’s livelihoods. But if you decline in enrollment by 300 kids or 500 kids, that’s what’s driving the, you know, that’s what drives us.”

Dr. Davin Turner, Chief Medical Officer of Mosaic Life Care, said there are currently 20 patients hospitalized from implications due to COVID-19. He said Mosaic supports the public wearing a mask to limit the spread.

Of those 20 patients, 15 are still testing positive while five have now tested negative although they are still needing hospital attention, Turner said there are five patients in the Intensive Care Unit.

"We recommend that all people wear masks when they are going to be out in a public setting. Why masks are beneficial is that masks inhibit the transmission of droplets. We know That COVID-19 is transmitted via the droplets that come out of your nose and your mouth," Turner said.

Turner said that Mosaic and the Centers for Disease Control and Prevention  believe a majority of the spread is through the droplets and less through surfaces, which is why wearing a mask is important in controlling the spread.

Turner said he and Mosaic believe that masks would be a simple solution to decrease rising numbers of cases and not go back to business regulations and stay-at-home orders.

"Masks would help decrease the rise in the number of cases in all of the communities around us, not just here," Turner said. "We think that (wearing masks) is the best thing that we can do for the community, as opposed to trying to shut back down at this particular time."

Turner said the hospital was prepared for a rise in cases in the community as well as an increase in hospitalizations due to people not wearing masks in large gatherings.

"We did believe that when we opened up we would see an increased number of cases, as people went back out and went to large gatherings where most are not wearing masks. And all you have to do is go pretty much to any place here in St. Joe and you see very limited masks being worn," Turner said.

Turner said at this time Mosaic is confident the hospital will not overcrowd as the hospital has up to 100 rooms they can use as negative pressure rooms for those with COVID-19 or other infectious diseases.

Mosaic currently has three COVID-19 positive patients on ventilators, although they have seen success getting patients off ventilators.

"We did have one that did come off the vent yesterday, which again has been a great success, but I can't say enough to give the credit for our success to the nurses and whenever I say that, please understand (that includes) behind the scenes, the people you don't see -- dietary, cleaning, pharmacies, the techs, everyone that's there," Turner said "It's not just the nurses, but they are the front there in those rooms all the time. And we really have to give them the credit they deserve for the outcomes we're having."

As of now Mosaic is not allowing visitors for COVID-19 patients and limiting visitors to one for all other patients as well as still doing temperature checks for everyone who enters the hospital. Turner said the hospital most likely 'go back to normal procedures in those regards for six months to a year. 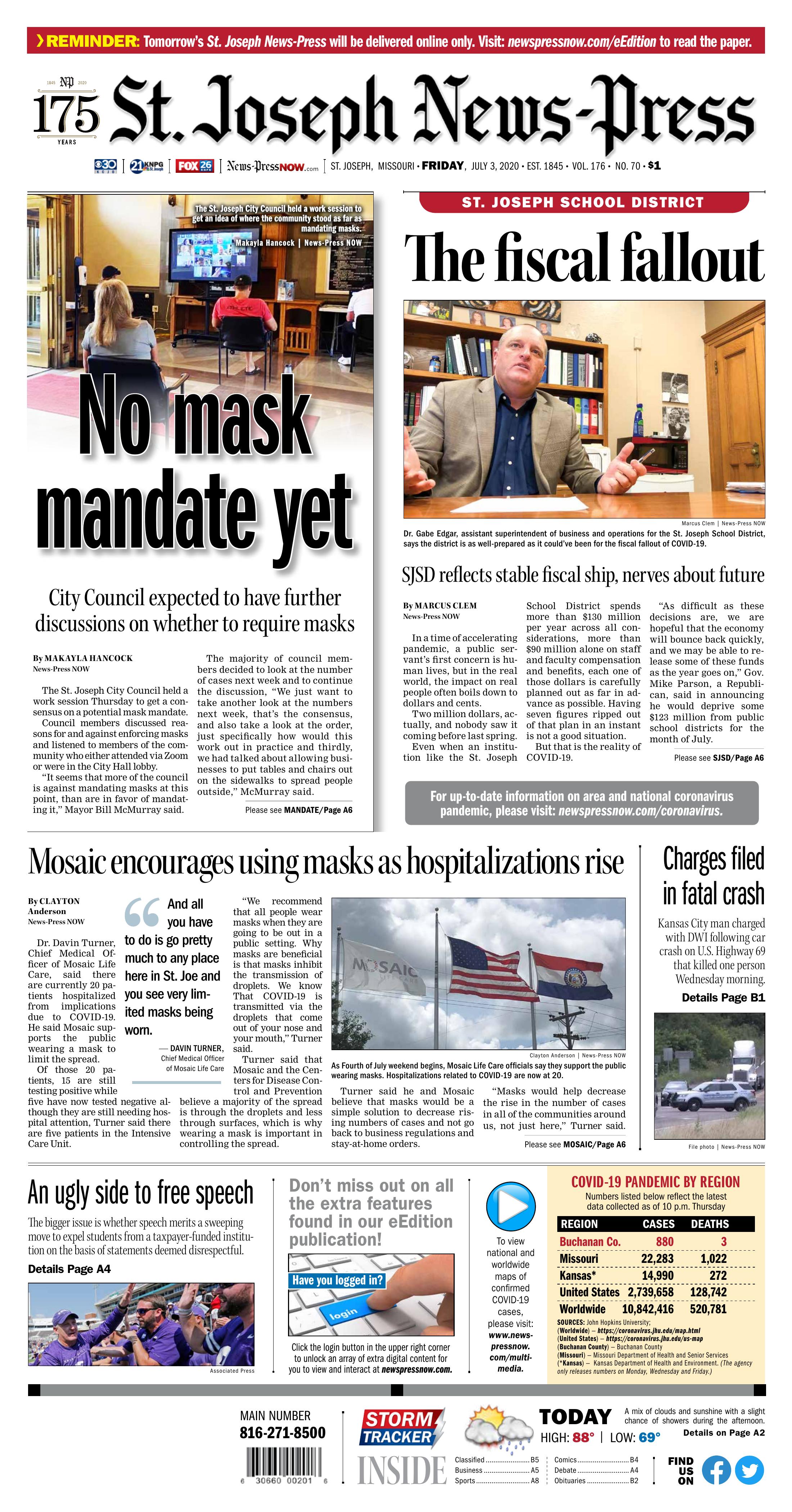