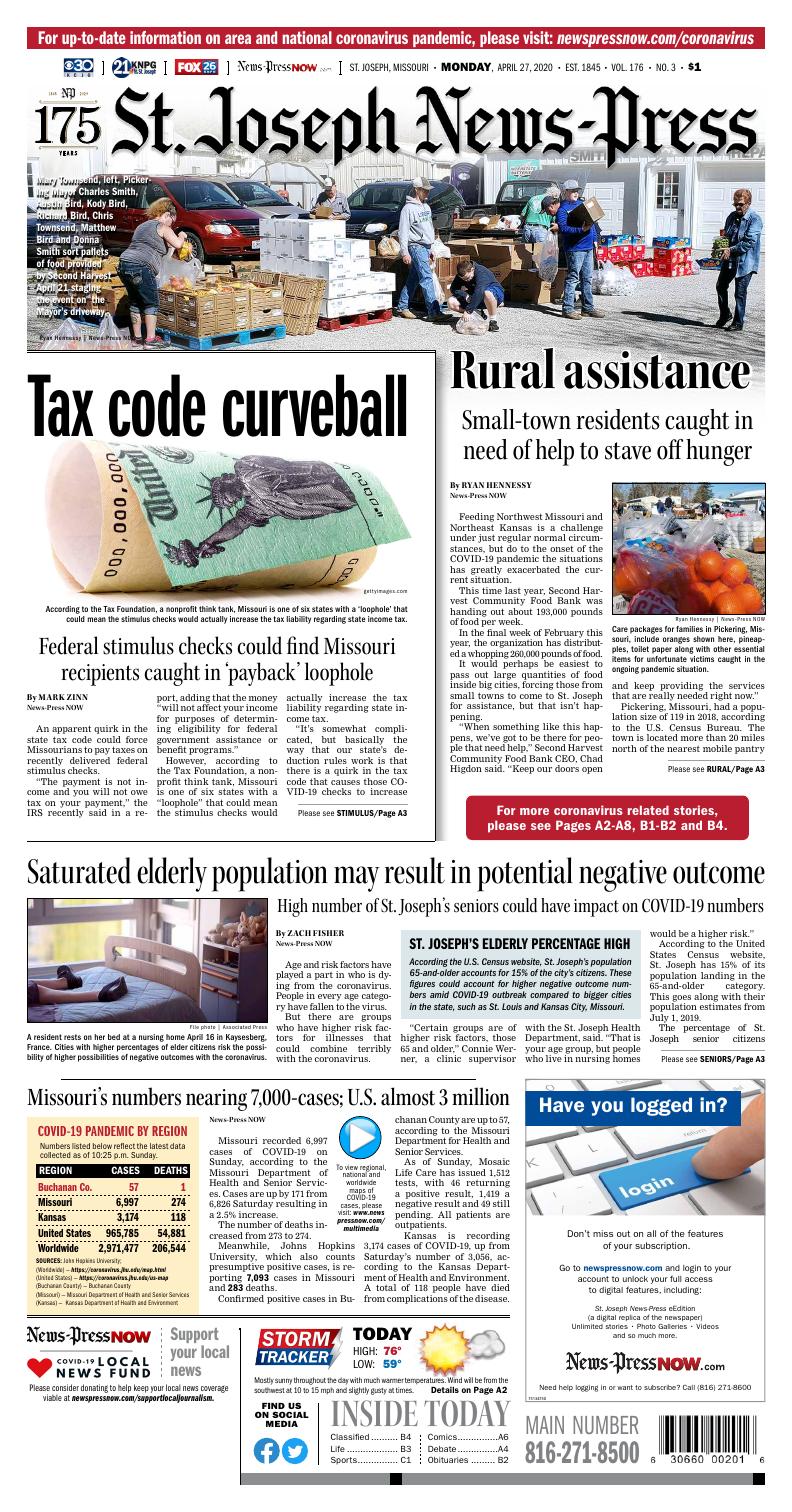 An apparent quirk in the state tax code could force Missourians to pay taxes on recently delivered federal stimulus checks.

“The payment is not income and you will not owe tax on your payment,” the IRS recently said in a report, adding that the money “will not affect your income for purposes of determining eligibility for federal government assistance or benefit programs.”

However, according to the Tax Foundation, a nonprofit think tank, Missouri is one of six states with a “loophole” that could mean the stimulus checks would actually increase the tax liability regarding state income tax.

“It’s somewhat complicated, but basically the way that our state’s deduction rules work is that there is a quirk in the tax code that causes those COVID-19 checks to increase your Missouri income tax liability,” said State Sen. Tony Luetkemeyer, who is sponsoring a measure to address the confusion. “So I’m hoping with this legislation we’re going to be able to carve those out in a way that would make sure people aren’t taxed on the stimulus checks.”

Because of limited time left in the regular legislative session, Luetkemeyer, a Republican who represents Buchanan and Platte counties, added the new proposal as an amendment to an existing tax bill that already is moving through the Missouri Legislature.

“In this time of great economic uncertainty, Missouri citizens should not have to worry about their stimulus checks being taxed by the government," Gov. Mike Parson said in a statement to News-Press NOW. "I appreciate Sen. Luetkemeyer’s leadership on this issue and for looking out for Missouri taxpayers."

The taxation of the stimulus checks would happen at the state level. And while not directly acknowledging the existence of the potential taxing, the Missouri Department of Revenue said Luetkemeyer’s provision would ensure state taxes wouldn’t be collected on the federal direct payouts.

“While it has not yet been determined how the IRS will instruct the states to treat federal stimulus money for individual income tax purposes, the measure proposed in the amendment is a safeguard that will protect Missouri taxpayers from the possibility of being penalized for receiving federal stimulus dollars,” said Anne Marie Moy, the communications director for the Missouri Department of Revenue. “The amendment ensures Missourians benefit from federal economic relief, as it was intended.”

The way the tax system is structured is if your federal tax liability goes down, your state liability rises, and vice versa.

According to similar figures from the Department of Revenue and a research attorney with the Missouri Senate, the potential tax Missourians would have to pay on their 2020 state taxes would be $64.80 on a single $1,200 stimulus check.

“My view is right now people are clearly struggling and I don’t think that government should be making revenue off of the stimulus checks that people are receiving,” Luetkemeyer said. “That money should go directly into people’s pockets.

“It should stay in the pockets of workers to help them weather the storm that we’re going through right now.”

Cole Bird takes grocery items from pallets distributed from Second Harvest to assemble into 20 care packages las week for families of Pickering, Missouri who have been affected by the COVID-19 pandemic.

Care packages for families in Pickering, Missouri, include oranges shown here, pineapples, toilet paper along with other essential items for unfortunate victims caught in the ongoing pandemic situation.

The Pickering gang of nine included Mayor Charles Smith and his wife Donna Smith. Granddaughter and her husband Chris and Mary Townsend. And Richard Bird and four of his grandsons, Cole, Austin, Matthew and Kody Bird. Their outreach to feed hungry families in the area has been a priority to care for their neighbors in the area.

Feeding Northwest Missouri and Northeast Kansas is a challenge under just regular normal circumstances, but do to the onset of the COVID-19 pandemic the situations has greatly exacerbated the current situation.

This time last year, Second Harvest Community Food Bank was handing out about 193,000 pounds of food per week.

In the final week of February this year, the organization has distributed a whopping 260,000 pounds of food.

It would perhaps be easiest to pass out large quantities of food inside big cities, forcing those from small towns to come to St. Joseph for assistance, but that isn’t happening.

“When something like this happens, we’ve got to be there for people that need help,” Second Harvest Community Food Bank CEO, Chad Higdon said. “Keep our doors open and keep providing the services that are really needed right now.”

Pickering, Missouri, had a population size of 119 in 2018, according to the U.S. Census Bureau. The town is located more than 20 miles north of the nearest mobile pantry in Barnard, Missouri, which passes out food on the first Thursday of the month.

Donna Smith has lived in Pickering with her husband, Charles, the town’s mayor and mechanic for 35 years. Smith and her husband know their community.

“Most of them have little bitty kids,” Donna Smith said. “Then, all of a sudden they’re not working and it wasn’t their fault, so they’re having to figure out what to do now.”

Last week Smith reached out to the food bank about the challenges Pickering has faced, and within five days Second Harvest made good on a promise to deliver provisions for 20 families.

“It really is an honor for us to be able to respond when somebody calls and asks for help,” Higdon said.

Smith was part of the group of nine tasked with assembling care packages and then loading them into community member’s cars and trucks this week.

“I’m not bragging or anything, but I love my country right here, I love Pickering,” Smith said.

Included in the groceries were pineapples, potatoes, rice, toilet paper, grapes and celery.

“I’m hoping it will help them out tremendously, because one family I know has four little kids,” Smith said.

The demand for food from Second Harvest has grown by at least 35% at mobile pantries since the beginning of the pandemic, but sometimes reaching as high as 50%, according to Higdon.

To find a mobile pantry nearest to your community, visit shcfb.org/news-events/event-calendar.html.

Second Harvest’s mobile pantry schedule tries to fill the gaps inside its 19-county coverage area by taking into account other brick-and-mortar pantries.

“We still knew there were towns out there that still had gaps and didn’t have any access to any services,” Higdon said. “Getting the call last week our staff has really stepping up to respond and able to help.”

National Guard members in Kansas and Missouri began helping with food distribution, packing and stocking shelves at the food bank during this past week. The current plan includes the military’s help at Second Harvest well into the month of May.

A resident rests on her bed at a nursing home April 16 in Kaysesberg, France. Cities with higher percentages of elder citizens risk the possibility of higher possibilities of negative outcomes with the coronavirus.

Age and risk factors have played a part in who is dying from the coronavirus. People in every age category have fallen to the virus.

But there are groups who have higher risk factors for illnesses that could combine terribly with the coronavirus.

“Certain groups are of higher risk factors, those 65 and older,” Connie Werner, a clinic supervisor with the St. Joseph Health Department, said. “That is your age group, but people who live in nursing homes would be a higher risk.”

According to the United States Census website, St. Joseph has 15% of its population landing in the 65-and-older category. This goes along with their population estimates from July 1, 2019.

The percentage of St. Joseph senior citizens compared to Missouri’s five biggest cities have the city ahead of several others. Kansas City and St. Louis each have 12.6% of their population being senior citizens, and Columbia has 10.2%.

Springfield has a higher percentage of senior citizens at 15.5%, and Independence sits at 17.9%.

So does having a higher percentage of older citizens put St. Joseph at more risk for the coronavirus because of underlying conditions?

“I don’t know that it spreads more through any certain population or age group,” Werner said. “It is just what the risk is of having a higher hospitalization rate, a higher ICU rate, of having higher risk of complications with this virus spreading.”

Older citizens have a higher chance of negative outcomes because of the virus, but that does not mean that St. Joseph is more prone to the virus spreading faster because a higher percentage of the population is 65 and older.

“It is not that you didn’t get it, it is that you didn’t know you even had it but you still were a contagion,” Werner said. “So the higher percentage (of the population) means that we have a greater risk for hospitalizations and negative outcomes.”

With the higher population percentage of elders in St. Joseph, Werner also said the community needs to do its part in stopping this spread. Whether it is wearing a mask in public, social distancing or not leaving the house at all, everyone can play a role in minimizing those negative outcomes, she said.

Missouri recorded 6,997 cases of COVID-19 on Sunday, according to the Missouri Department of Health and Senior Services. Cases are up by 171 from 6,826 Saturday resulting in a 2.5% increase.

Confirmed positive cases in Buchanan County are up to 57, according to the Missouri Department for Health and Senior Services.

As of Sunday, Mosaic Life Care has issued 1,512 tests, with 46 returning a positive result, 1,419 a negative result and 49 still pending. All patients are outpatients.

Kansas is recording 3,174 cases of COVID-19, up from Saturday’s number of 3,056, according to the Kansas Department of Health and Environment. A total of 118 people have died from complications of the disease. 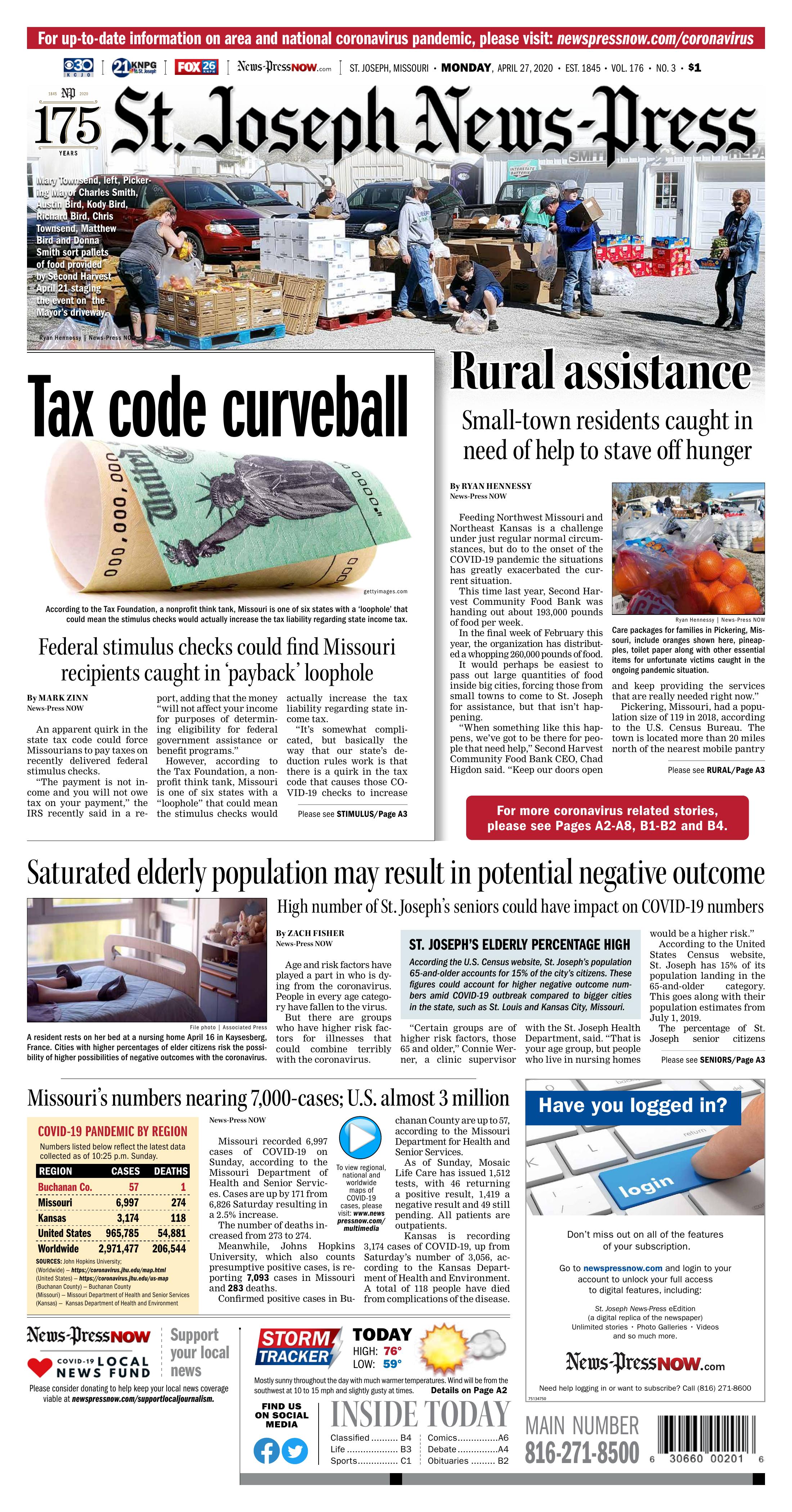