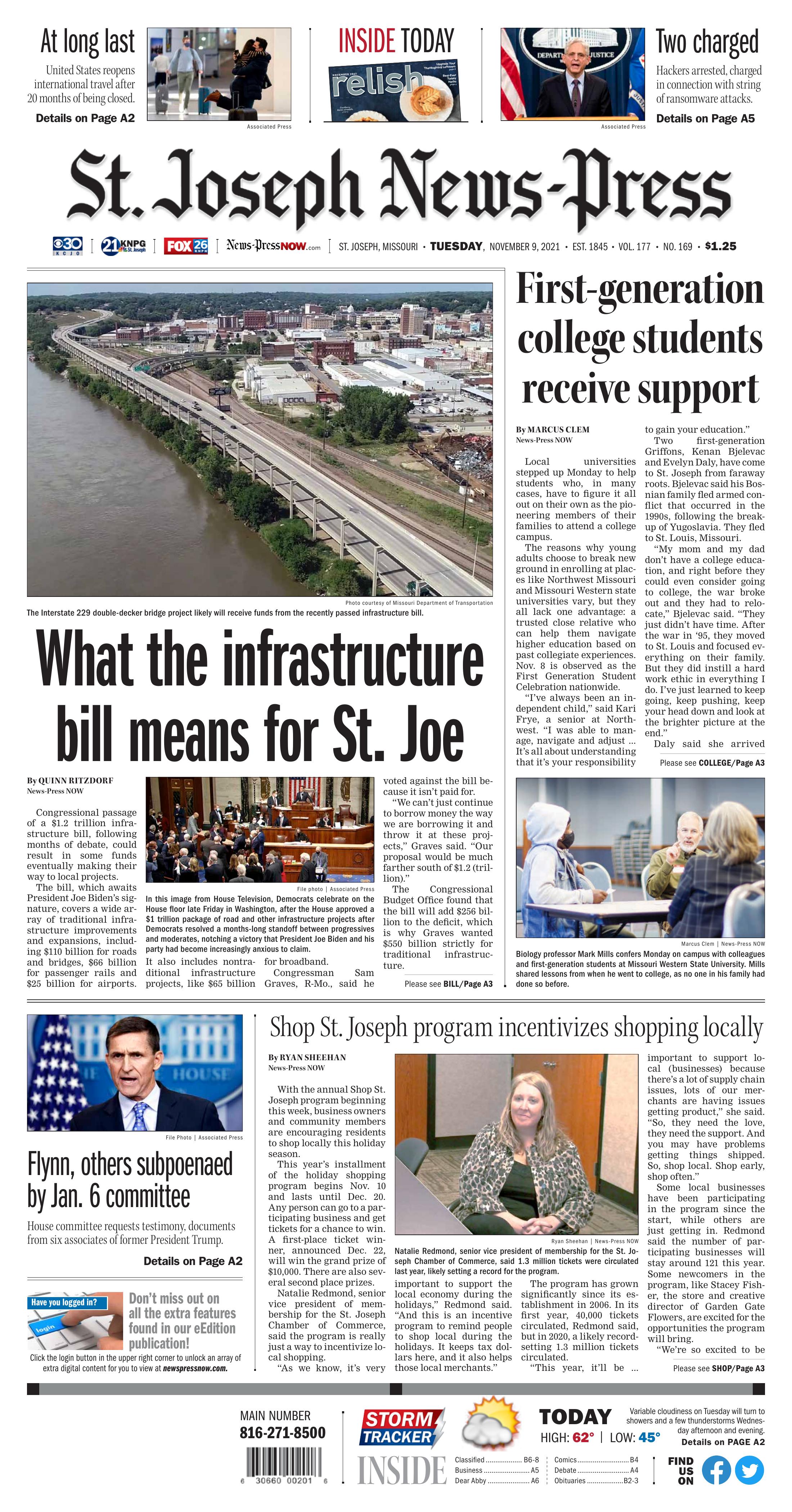 In this image from House Television, Democrats celebrate on the House floor late Friday, Nov. 5, 2021, in Washington, after the House approved a $1 trillion package of road and other infrastructure projects after Democrats resolved a months-long standoff between progressives and moderates, notching a victory that President Joe Biden and his party had become increasingly anxious to claim.

Congressional passage of a $1.2 trillion infrastructure bill, following months of debate, could result in some funds eventually making their way to local projects.

Congressman Sam Graves, R-Mo., said he voted against the bill because it isn’t paid for.

“We can’t just continue to borrow money the way we are borrowing it and throw it at these projects,” Graves said. “Our proposal would be much farther south of $1.2 (trillion).”

The Congressional Budget Office found that the bill will add $256 billion to the deficit, which is why Graves wanted $550 billion strictly for traditional infrastructure.

As for the bill’s uses? The $1.2 trillion won’t go toward fixing the potholes in your neighborhood. The funds have specific designations for federal projects.

“There is a difference in projects,” Graves said. “So lettered routes and gravel roads, all those are a component of only the state or the county. These would just be for projects that have a federal component, like the highway system and the interstate system.

“You would see money, for instance, on I-229, which we’re struggling right now trying to figure out what we’re going to do with the double-decker bridge on the west side of St. Joseph and the problems that MoDOT is having with that,” Graves said. “Some of the federal dollars that we’re talking about in this would be used to fund whatever is going to ultimately happen to I-229.”

Use of the funds is still very much up in the air, which allowed St. Joseph Mayor Bill McMurray to speculate on some potential uses, including raising Highway 59 to limit flooding, extending Cook Road to I-229 and rebuilding the terminal at Rosecrans Memorial Airport.

“There are just a lot of infrastructure-type things that occurred to me that this could help on a grand scale,” McMurray said.

Money for a passenger rail also caught McMurray’s eye. He remembers when he took trains up to Omaha and Chicago when he was young.

“It’d be nice to have passenger rail service connecting these cities, particularly when we want to be more conscious of our climate,” he said.

However, he said there are no set plans for using the money locally.

“Until we really get some details, until our congressional delegation really gets on the stick and starts getting some of this money flowing our direction, we won’t really know how we can spend it,” McMurray said.

But officials from both Buchanan County and the city of St. Joseph realize the potential these funds could bring to Northwest Missouri.

“Any time you’re talking roads, bridges, that’s obviously very important for the people in this area, whether you’re getting your kids to school, on school buses or you’re taking your grain to market or (for) emergency transportation,” said Lee Sawyer, the presiding Buchanan County Commissioner. “Good roads and bridges are super important, so if this, in fact, lends itself to that, I think that would be great.”

Biology professor Mark Mills confers Monday on campus with colleagues and first-generation students at Missouri Western State University. Mills shared lessons from when he went to college, as no one in his family had done so before.

Kari Frye, a Northwest Missouri State University senior, receives advice Monday on campus in Maryville. Frye, the first in her family to attend college, said she found it challenging to figure out education finances for herself.

Local universities stepped up Monday to help students who, in many cases, have to figure it all out on their own as the pioneering members of their families to attend a college campus.

The reasons why young adults choose to break new ground in enrolling at places like Northwest Missouri and Missouri Western state universities vary, but they all lack one advantage: a trusted close relative who can help them navigate higher education based on past collegiate experiences. Nov. 8 is observed as the First Generation Student Celebration nationwide.

“I’ve always been an independent child,” said Kari Frye, a senior at Northwest. “I was able to manage, navigate and adjust ... It’s all about understanding that it’s your responsibility to gain your education.”

Two first-generation Griffons, Kenan Bjelevac and Evelyn Daly, have come to St. Joseph from faraway roots. Bjelevac said his Bosnian family fled armed conflict that occurred in the 1990s, following the breakup of Yugoslavia. They fled to St. Louis, Missouri.

“My mom and my dad don’t have a college education, and right before they could even consider going to college, the war broke out and they had to relocate,” Bjelevac said. “They just didn’t have time. After the war in ‘95, they moved to St. Louis and focused everything on their family. But they did instill a hard work ethic in everything I do. I’ve just learned to keep going, keep pushing, keep your head down and look at the brighter picture at the end.”

Daly said she arrived from Cork, Ireland, as a soccer student-athlete, first in California and then at Western. With the goal of remaining in the U.S. for life, she is driven to obtain a graduate degree and seek coveted employer sponsorship for naturalization.

Each student spoke to feeling, at times, like an overseas fish out of water. Yet the resources they’ve been able to obtain, the relationships they’ve formed, have made it all happen.

“I know college is a lot different than high school,” Daly said. “But the experiences here, the people you meet, everything, your professors, they’re so much different. You have your freedom to be whatever student you want to be. If you decide to not do your work, that’s on you ... At the end of the day, it’s your dream.”

Jay Johnson, associate provost at Northwest, spoke on how universities understand that supporting first-generation students is a solemn duty to help those in need and an act that fortifies the future of the institution.

“We are designing everything we do to communicate with these students that we have resources for them to be successful,” he said.

This year’s installment of the holiday shopping program begins Nov. 10 and lasts until Dec. 20. Any person can go to a participating business and get tickets for a chance to win. A first-place ticket winner, announced Dec. 22, will win the grand prize of $10,000. There are also several second place prizes.

Natalie Redmond, senior vice president of membership for the St. Joseph Chamber of Commerce, said the program is really just a way to incentivize local shopping.

“As we know, it’s very important to support the local economy during the holidays,” Redmond said. “And this is an incentive program to remind people to shop local during the holidays. It keeps tax dollars here, and it also helps those local merchants.”

“This year, it’ll be ... important to support local (businesses) because there’s a lot of supply chain issues, lots of our merchants are having issues getting product,” she said. “So, they need the love, they need the support. And you may have problems getting things shipped. So, shop local. Shop early, shop often.”

Some local businesses have been participating in the program since the start, while others are just getting in. Redmond said the number of participating businesses will stay around 121 this year. Some newcomers in the program, like Stacey Fisher, the store and creative director of Garden Gate Flowers, are excited for the opportunities the program will bring.

“We’re so excited to be a part of the Shop St. Joseph program,” Fisher said. “This is the first year that Garden Gate Flowers has taken, and as consumers, everyone in the shop has always been very, very excited about it.”

In order to get a ticket, a shopper can go to a participating business and ask for a ticket or receive one for every $10 in purchases. A shopper must be 18 years or older to win and cannot win from a store that they work at.