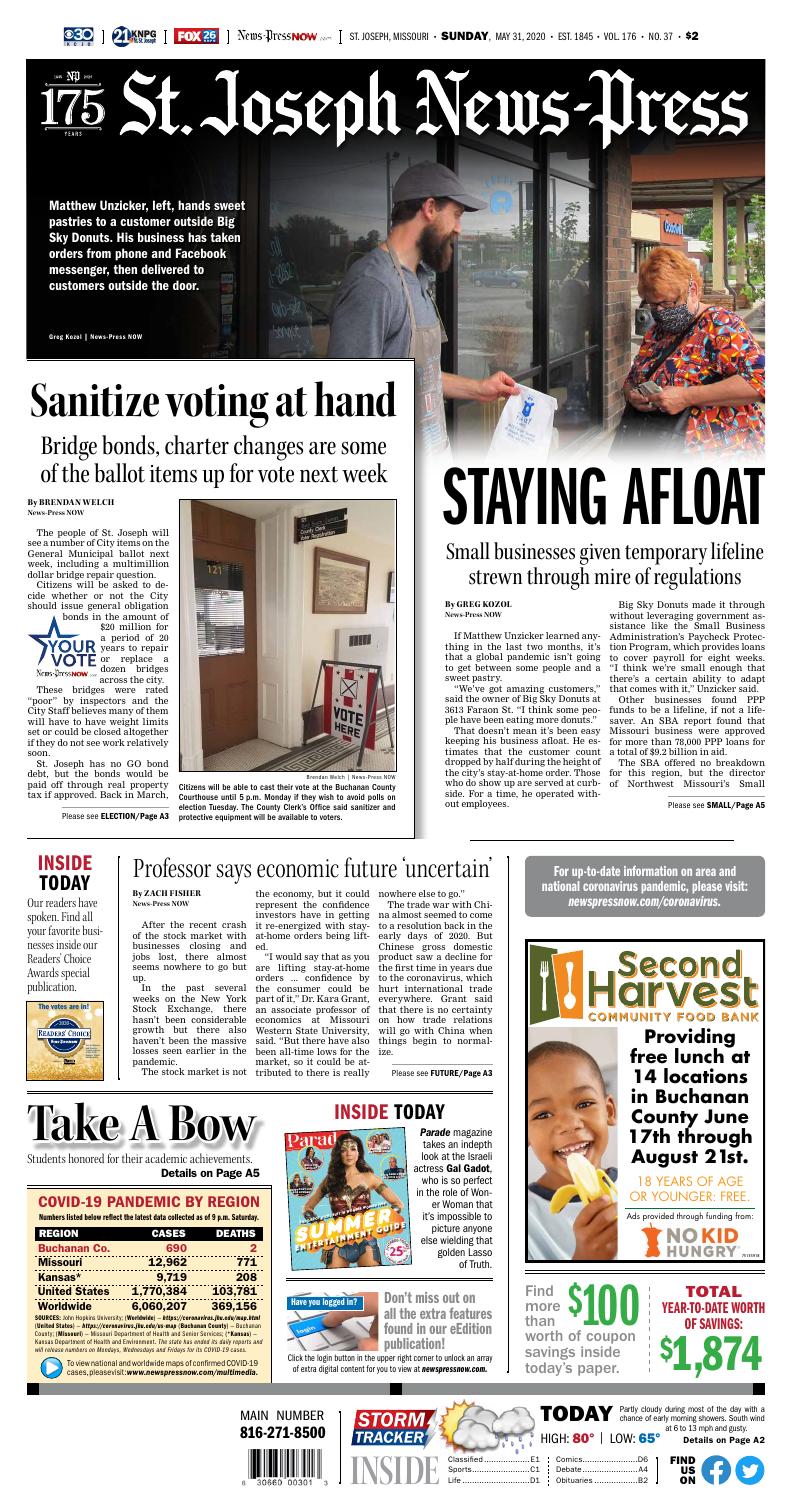 Local_news
A lifeline, but not a lifesaver
By Greg Kozol News-Press NOW

Matthew Unzicker, left, hands sweet pastries to a customer outside Big Sky Donuts. His business has taken orders from phone and Facebook messenger, then delivered to customers outside the door.

If Matthew Unzicker learned anything in the last two months, it’s that a global pandemic isn’t going to get between some people and a sweet pastry.

“We’ve got amazing customers,” said the owner of Big Sky Donuts at 3613 Faraon St. “I think some people have been eating more donuts.”

That doesn’t mean it’s been easy keeping his business afloat. He estimates that the customer count dropped by half during the height of the city’s stay-at-home order. Those who do show up are served at curbside. For a time, he operated without employees.

Big Sky Donuts made it through without leveraging government assistance like the Small Business Administration’s Paycheck Protection Program, which provides loans to cover payroll for eight weeks. “I think we’re small enough that there’s a certain ability to adapt that comes with it,” Unzicker said.

Other businesses found PPP funds to be a lifeline, if not a lifesaver. An SBA report found that Missouri business were approved for more than 78,000 PPP loans for a total of $9.2 billion in aid.

The SBA offered no breakdown for this region, but the director of Northwest Missouri’s Small Business Development Center helped at least 100 to successfully apply.

“It’s been a relief for the time people have the funds,” said Rebecca Lobina, director of the SBDC in St. Joseph. “That prevents layoffs, it keeps money flowing into the economy. On the flip side, it doesn’t bring in income other than to pay payroll, so there’s still additional expenses that they have as a small business owner that aren’t covered by the PPP funds, like insurance and things like that.”

Despite some bad publicity, few businesses experienced trouble applying for and accessing PPP funds, Lobina said. The real problem comes later when small businesses need to comply with a maze of regulations to ensure that the money is being used the right way, with most of the funds directed to payroll and a smaller allotment authorized for rent, mortgage interest or utilities.

The means documenting the number of employees prior to the pandemic and showing that employees were retained and paid at the same rate after the shutdown. The guidelines were late in coming, so there’s been a rush to comply. Otherwise, the loan is not forgivable and Uncle Sam wants the money back.

“It is time consuming,” Lobina said. “You do not want to mess up your forgiveness application.”

Whether the PPP helps businesses survive or delays the inevitable remains to be seen. A national survey from Thryv and America’s SBDC found a higher level of confidence from businesses receiving SBA funds. The survey, conducted in early May, found that 28% of small businesses expect to be fully recovered a year from now and 4% don’t expect to survive.

The stakes are high, Lobina said, because all small businesses are essential, in the sense that they account for about 46% of the workforce in Missouri. Small business is not limited to restaurants and retailers but also includes a large number of health care, manufacturing, construction and professional services firms, according to the SBA.

“It’s one thing to be out of pocket for a week or two, maybe even a month,” she said, “but when it goes on this long, they have no income coming in whatsoever.”

Consider that the SBDC/Thryv survey found that more than 49% of businesses said they could not survive a shutdown that lasted more than four months.

On the front lines of one small business, Unzicker knows all about that uncertainty but believes Big Sky Donuts will be able weather the storm. He said the future won’t look the same, but it will involve donuts.

“It’s definitely kind of changed the model for how we get donuts out to our customers,” he said.

Citizens will be able to cast their vote at the Buchanan County Courthouse until 5 p.m. Monday if they wish to avoid polls on election Tuesday. The County Clerk’s Office said sanitizer and protective equipment will be available to voters.

The people of St. Joseph will see a number of City items on the General Municipal ballot next week, including a multimillion dollar bridge repair question.

Citizens will be asked to decide whether or not the City should issue general obligation bonds in the amount of $20 million for a period of 20 years to repair or replace a dozen bridges across the city.

These bridges were rated “poor” by inspectors and the City Staff believes many of them will have to have weight limits set or could be closed altogether if they do not see work relatively soon.

St. Joseph has no GO bond debt, but the bonds would be paid off through real property tax if approved. Back in March, Mayor Bill McMurray told News-Press NOW that the impact on homeowners would be minimal.

“This is a great time to finance this because the interest rates are so favorable and it’s going to cost you, if you have like a $100,000 house, I think it would cost you a couple of bucks a month.”

Voters also will see four propositions that would alter the City Charter.

Proposition 1 would change the structure of the City Council and political map to no longer have five districts, but four. There would be one Mayor, four At-Large Council Members and four District Council Members. The districts will be based off of census data and, if passed, this form of election would go into effect in 2022.

Proposition 2 would require Council Members to forfeit office if they miss more than six regular meetings in a year, unless six of nine Council Members vote to allow them to keep their position.

Proposition 3 would require the submission and Council approval of a capital program at the same time the operating budget is submitted and approved.

Proposition 4 would change the Charter to declare a candidate elected if they receive votes from the majority of voters casting votes in that primary election.

These changes were all recommended by a Charter Review Committee in the Fall of 2019.

There was some discussion about possibly postponing the election a second time due to COVID concerns, but it was determined that couldn’t happen.

Buchanan County Clerk Mary Baack-Garvey said people should not be afraid to vote, because proper safety measures are being taken at the polls.

“I have ‘COVID kits,’ is what I call them,” Baack-Garvey said. “We have everything from hand sanitizer, to masks, to disinfectant spray. That’s all going to be at the polls through my office.”

She said the election judges have been instructed to watch to make sure people are keeping their distance, but she doesn’t expect it to be an issue.

Those who wish to vote absentee at the County Clerk office can do so until 5 p.m. Monday.

McArthur Drive over over BNSF Railroad

There hasn’t been a significant growth or decrease on Wall Street the last couple of weeks. Economic growth is what was expected as weeks passed by as businesses begin to reopen.

After the recent crash of the stock market with businesses closing and jobs lost, there almost seems nowhere to go but up.

In the past several weeks on the New York Stock Exchange, there hasn’t been considerable growth but there also haven’t been the massive losses seen earlier in the pandemic.

The stock market is not the economy, but it could represent the confidence investors have in getting it re-energized with stay-at-home orders being lifted.

“I would say that as you are lifting stay-at-home orders ... confidence by the consumer could be part of it,” Dr. Kara Grant, an associate professor of economics at Missouri Western State University, said. “But there have also been all-time lows for the market, so it could be attributed to there is really nowhere else to go.”

The trade war with China almost seemed to come to a resolution back in the early days of 2020. But Chinese gross domestic product saw a decline for the first time in years due to the coronavirus, which hurt international trade everywhere. Grant said that there is no certainty on how trade relations will go with China when things begin to normalize.

“We are reasonably linked at this point, they have a lot of our debt,” Grant said. “I think that it would be silly to not think we can come to an agreeable outcome, but I do think China has more bargaining power.”

The United States leads the world in the total death toll of the virus at just over 100,000. Jobless claims are at a high, with just over 40 million people out of work in 10 weeks.

One fear is that companies could get used to the idea of alternate methods rather than hiring back employees.

“You might see a shift in companies replacing workers with automation or whatever route they choose,” Grant said. “We saw that in the last recession in 2008 where people lost their jobs because companies found alternate routes.”

Grant also made the point that the future for the economy is uncertain. It could get better before it gets worse or vice versa. There is no blueprint for how this type of unpredictability goes, she said. 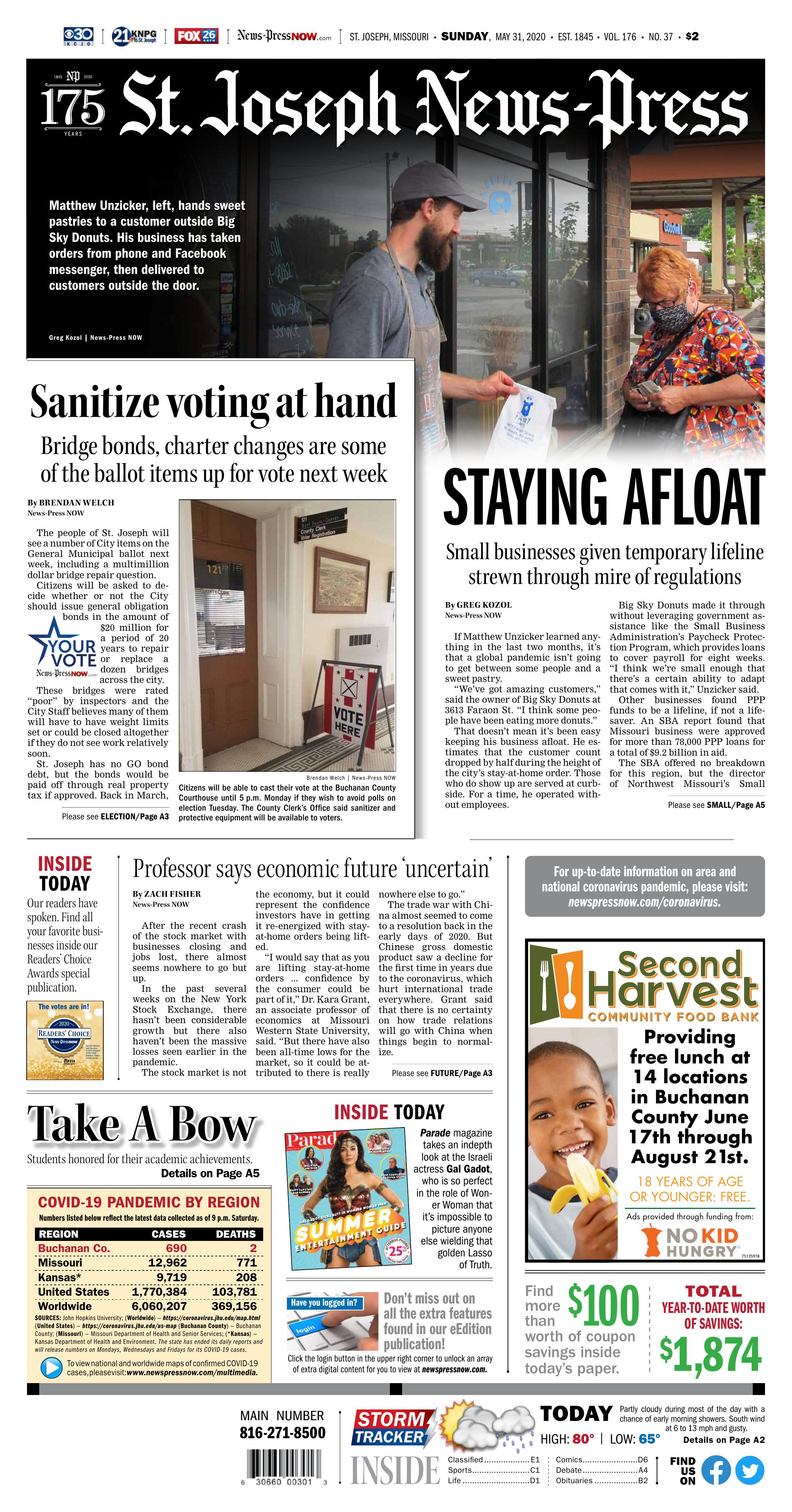