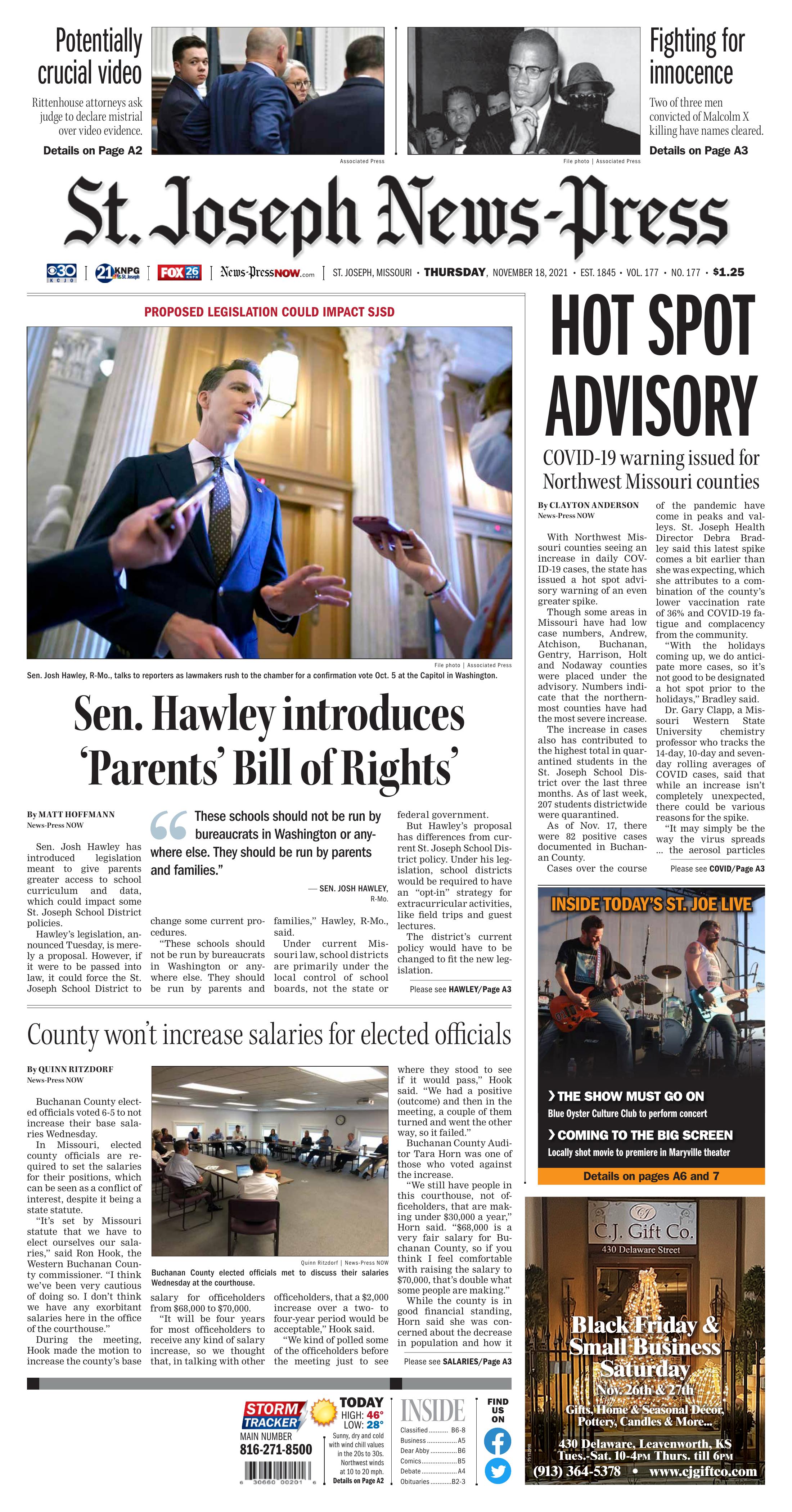 Sen. Josh Hawley, R-Mo., has introduced legislation for a 'Parents' Bill of Rights.'

The first page of the St. Joseph School District Curriculum Handbook. Under proposed legislation filed by Sen. Josh Hawley, R-Mo., the district would need to change some policies.

Sen. Josh Hawley has introduced legislation meant to give parents greater access to school curriculum and data, which could impact some St. Joseph School District policies.

Hawley’s legislation, announced Tuesday, is merely a proposal. However, if it were to be passed into law, it could force the St. Joseph School District to change some current procedures.

“These schools should not be run by bureaucrats in Washington or anywhere else. They should be run by parents and families,” Hawley, R-Mo., said.

Under current Missouri law, school districts are primarily under the local control of school boards, not the state or federal government.

But Hawley’s proposal has differences from current St. Joseph School District policy. Under his legislation, school districts would be required to have an “opt-in” strategy for extracurricular activities, like field trips and guest lectures.

The district’s current policy would have to be changed to fit the new legislation.

“Currently, the district has an opt-out policy,” said Eileen Houston-Stewart, director of communications for the district. “Parents are notified and then they choose to opt out if they do not want their child to participate.”

The proposed legislation would require explicit permission from parents before schools could collect biometric information. Houston-Stewart said the local district does not collect biometric data at this time.

Hawley’s proposal would require districts to notify parents of all reported incidents pertaining to school safety, including crimes committed by employees.

According to Houston-Stewart, current state law prohibits the district from notifying parents about some arrests involving teachers or other employees.

“Specifically, the district participates in the Missouri Rap Back program, which notifies the district shortly after the arrest of any current employee,” Houston-Stewart said in a statement. “However, the results of those criminal background checks and Rap Back notifications are confidential under (a state law), and improper disclosure of criminal records information is a class A misdemeanor.”

Hawley’s proposal and current St. Joseph School District policies overlap in many areas. The legislation requires school board meetings to be open to the public, which the district generally does except for closed sessions authorized under state law.

The bill also requires district contracts to be public, which Houston-Stewart said the Board of Education already publishes on its website.

School curriculum is already public, as the bill would require, and will be more readily available once the district switches to Google Sites, Houston-Stewart said.

Hawley also seized on a Department of Justice memo, which Attorney General Merrick Garland said was to open a line of communication between the federal government and local school boards in case of violence.

Hawley worries the memo is a way for federal officials, like FBI agents, to involve themselves in local school boards and influence parents and local officials.

Lori Witham, a St. Joseph school board member, said Tuesday that she hasn’t felt any influence from the DOJ memo.

“Personally as an individual board member, (I) do not feel specifically influenced by the DOJ memo,” Witham said in a statement. “I do firmly believe, however, that the federal government does not need to be exerting influence over school boards and that local control is the best for all districts.”

This map illustration from the Missouri Department of Health and Senior Services shows the increases in daily COVID-19 cases in Missouri counties.

With Northwest Missouri counties seeing an increase in daily COVID-19 cases, the state has issued a hot spot advisory warning of an even greater spike.

Though some areas in Missouri have had low case numbers, Andrew, Atchison, Buchanan, Gentry, Harrison, Holt and Nodaway counties were placed under the advisory. Numbers indicate that the northernmost counties have had the most severe increase.

The increase in cases also has contributed to the highest total in quarantined students in the St. Joseph School District over the last three months. As of last week, 207 students districtwide were quarantined.

As of Nov. 17, there were 82 positive cases documented in Buchanan County.

Cases over the course of the pandemic have come in peaks and valleys. St. Joseph Health Director Debra Bradley said this latest spike comes a bit earlier than she was expecting, which she attributes to a combination of the county’s lower vaccination rate of 36% and COVID-19 fatigue and complacency from the community.

“With the holidays coming up, we do anticipate more cases, so it’s not good to be designated a hot spot prior to the holidays,” Bradley said.

Dr. Gary Clapp, a Missouri Western State University chemistry professor who tracks the 14-day, 10-day and seven-day rolling averages of COVID cases, said that while an increase isn’t completely unexpected, there could be various reasons for the spike.

“It may simply be the way the virus spreads ... the aerosol particles with the virus come from our mouth is how it’s predominantly spread, so if we don’t interact with people that have it, or if you wear a mask, chances are you’re going to be protected,” Clapp said.

Andrew County has seen an increase in cases as well and currently has a vaccination rate of just under 43%. Jayne White, the county’s communicable disease nurse, said it is important that the public is informed when cases start to rise, as the virus is going to continue to be present in the community.

White said there still is room for optimism as spikes in cases have been less dramatic over time.

“If you look at the numbers from last year, this time was huge numbers but the spikes we’ve had since then have not been near that great ... we’ve seen it go up and come back down into a little valley, and every time it’s done that it’s been less and the numbers haven’t been as big of a spike,” White said.

On Wednesday, Mosaic Life Care reported 33 patients hospitalized for COVID in its system. Of those, 29 were in the health system’s St. Joseph location, with three being treated in Maryville and one at the Albany hospital.

Buchanan County elected officials met to discuss their salaries Wednesday at the courthouse.

Buchanan County elected officials voted 6-5 to not increase their base salaries Wednesday.

In Missouri, elected county officials are required to set the salaries for their positions, which can be seen as a conflict of interest, despite it being a state statute.

“It’s set by Missouri statute that we have to elect ourselves our salaries,” said Ron Hook, the Western Buchanan County commissioner. “I think we’ve been very cautious of doing so. I don’t think we have any exorbitant salaries here in the office of the courthouse.”

During the meeting, Hook made the motion to increase the county’s base salary for officeholders from $68,000 to $70,000.

“It will be four years for most officeholders to receive any kind of salary increase, so we thought that, in talking with other officeholders, that a $2,000 increase over a two- to four-year period would be acceptable,” Hook said.

“We kind of polled some of the officeholders before the meeting just to see where they stood to see if it would pass,” Hook said. “We had a positive (outcome) and then in the meeting, a couple of them turned and went the other way, so it failed.”

Buchanan County Auditor Tara Horn was one of those who voted against the increase.

“We still have people in this courthouse, not officeholders, that are making under $30,000 a year,” Horn said. “$68,000 is a very fair salary for Buchanan County, so if you think I feel comfortable with raising the salary to $70,000, that’s double what some people are making.”

While the county is in good financial standing, Horn said she was concerned about the decrease in population and how it would affect finances going forward.

“What happens if the sales tax starts coming in at a slower rate and we can’t pay (a raise)? I don’t want to be the reason why someone else isn’t getting a raise,” Horn said.

Buchanan County has a slightly higher base salary than others of similar size, like Christian and Cole. But Hook mentioned rising prices as the need for a salary increase.

“I think we’re right in line with where we need to be, but it’d be nice to get a little increase with the way prices are right now and everything,” Hook said.

But Horn said she didn’t think the increases were fair.

“Inflation’s hitting everybody hard,” Horn said. “Someone who’s making, already, a very fair salary, I shouldn’t be asking for more.”

Salary commission meetings occur every other year, so officials can discuss raising salaries again in 2023.