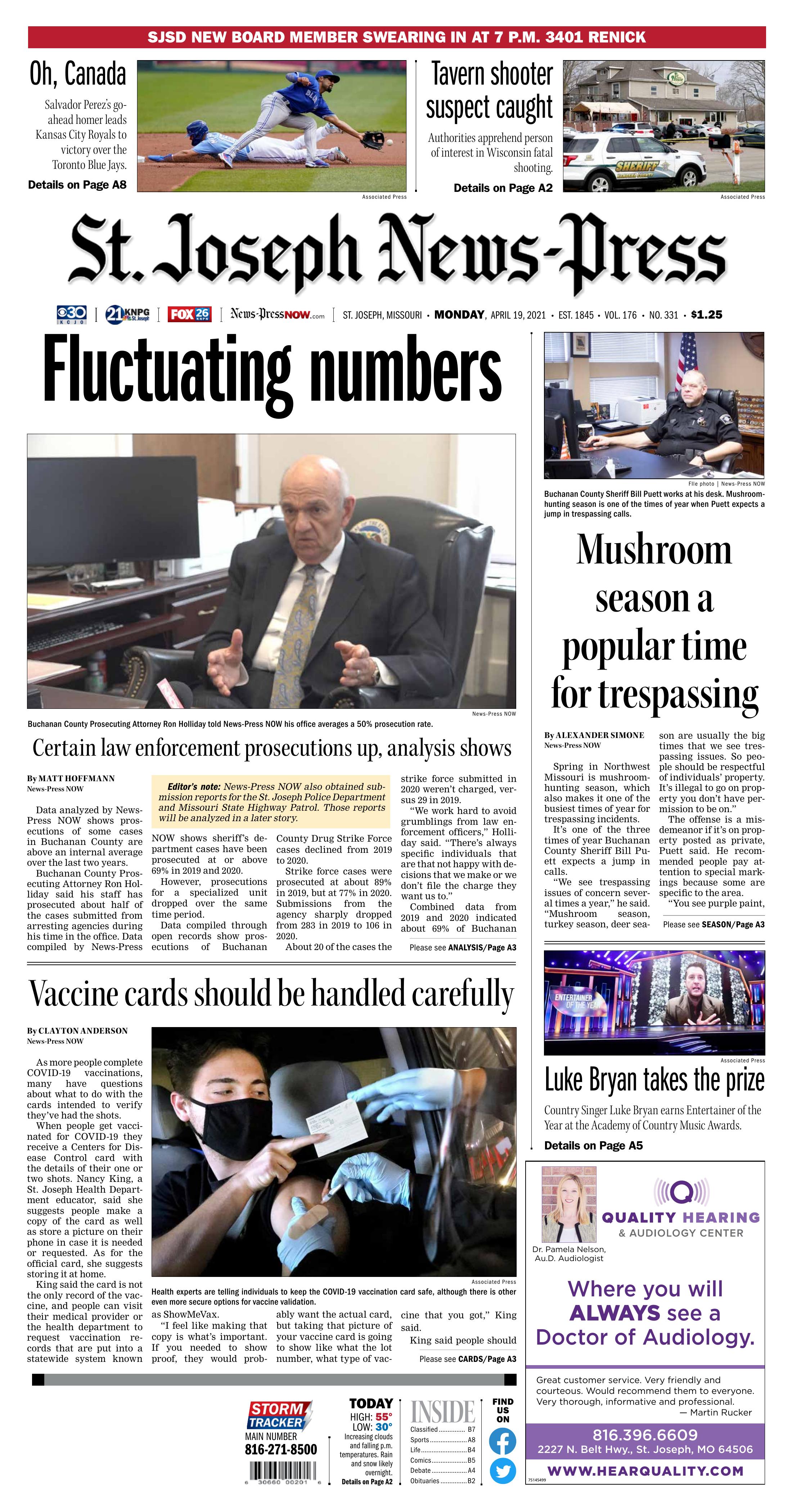 Data analyzed by News-Press NOW shows prosecutions of some cases in Buchanan County are above an internal average over the last two years.

Buchanan County Prosecuting Attorney Ron Holliday said his staff has prosecuted about half of the cases submitted from arresting agencies during his time in the office. Data compiled by News-Press NOW shows sheriff’s department cases have been prosecuted at or above 69% in 2019 and 2020.

However, prosecutions for a specialized unit dropped over the same time period.

“We work hard to avoid grumblings from law enforcement officers,” Holliday said. “There’s always specific individuals that are that not happy with decisions that we make or we don’t file the charge they want us to.”

Combined data from 2019 and 2020 indicated about 69% of Buchanan County Sheriff’s Department cases submitted to the prosecuting attorney’s office for potential charges were filed.

News-Press NOW analyzed submission reports internally generated by the prosecutor’s office. The reports show which criminal cases were submitted by law enforcement officers and if they ultimately lead to charges.

Reasons for not filing a charge include “insufficient evidence, inappropriate prosecution, other reason, probation violation or returned to law enforcement.”

Holliday said prosecutors must decide on a reason for not filing a charge via the software his office uses. Therefore, different categories may have different definitions based on which prosecutor handles a case.

For instance, an inappropriate prosecution could be a domestic violence case that was brought in bad faith, while “other reason” for not filing a charge could mean a person faces more serious charges in another jurisdiction.

“One thing that’s the hardest thing to teach young attorneys is to look at the submissions, a stack of police reports, and trying to see what they’re going to look like in eight months,” Holliday said. “You know, it’s a very difficult thing for us to prove the case beyond a reasonable doubt. When you have your typical, what’s referred to as ‘he said, she said’ case, right? Where there’s no evidence, there’s no extrinsic evidence. There’s no independent evidence.”

Holliday explained the difference in prosecution rates between the strike force and sheriff’s department is likely because of the types of cases the deputies handle.

“We have individuals who work extremely hard on these cases trying to serve the public,” Puett said. “And I think that’s reflected in the numbers.”

Buchanan County Sheriff Bill Puett works at his desk. Mushroom-hunting season is one of the times of year when Puett expects a jump in trespassing calls.

Spring in Northwest Missouri is mushroom-hunting season, which also makes it one of the busiest times of year for trespassing incidents.

It’s one of the three times of year Buchanan County Sheriff Bill Puett expects a jump in calls.

The offense is a misdemeanor if it’s on property posted as private, Puett said. He recommended people pay attention to special markings because some are specific to the area.

“You see purple paint, you should realize that’s an accepted no-trespassing indicator, as well as signage or fences,” he said.

Mushroom hunters also need to plan where to go before leaving home. It can be easy to stray between properties, Puett said. Just because one business owner is fine with people around doesn’t mean another feels the same.

“People need to be cognizant of where they are,” he said. “They may have permission to be on a property, but they need to know how far that extends. We’ve had examples where people are just going along thinking they’re on the property, they have permission, and they’ve ventured onto someone else’s property.”

Owners sometimes don’t want anyone on their property because they don’t want to worry about potential liability issues, Puett said.

“That’s why certain property owners prohibit activities like hunting and people moving around their property, especially in ditches and tree lines where they could get hurt,” he said.

Owners might be doing activities like target practice and not realize people are nearby, Puett said. That can be dangerous for anyone crossing the property, especially if they can’t be seen by other people potentially in the area.

As more people complete COVID-19 vaccinations, many have questions about what to do with the cards intended to verify they’ve had the shots.

When people get vaccinated for COVID-19 they receive a Centers for Disease Control card with the details of their one or two shots. Nancy King, a St. Joseph Health Department educator, said she suggests people make a copy of the card as well as store a picture on their phone in case it is needed or requested. As for the official card, she suggests storing it at home.

King said the card is not the only record of the vaccine, and people can visit their medical provider or the health department to request vaccination records that are put into a statewide system known as ShowMeVax.

“I feel like making that copy is what’s important. If you needed to show proof, they would probably want the actual card, but taking that picture of your vaccine card is going to show like what the lot number, what type of vaccine that you got,” King said.

King said people should be careful when posting their vaccination card on social media because of personal information on the card such as name and date of birth.

“There are already scams out there where you can purchase counterfeit cards because they’re just right now pieces of paper that probably you could if you got ahold of copy information,” she said. “The important thing to note is that the paper card is not the only record of your immunization in each state.”

Some people have wanted to laminate vaccination cards to keep them safe, but that’s not recommended as the ink can be smeared

Missouri Gov. Mike Parson has said he doesn’t support a vaccine passport in Missouri, and one is not expected to be supported by the state legislature.

King said Missouri does not have an app program for vaccinations currently and she believes a photocopy or picture on your phone of the card should suffice.

One of these apps is called IOpen which allows people to access there HIPPA records if they want so they can use a QR code at events to show their COVID-19 test results as well as vaccination records.

iOpen Chief Communications Officer Blair Wright said this will not obstruct privacy to the individuals because it will be their choice to open the records.

“The records anonymous until the user wants to provide this to gain access into a venue, a college campus cruise ship. For that matter, even a wedding,” Wright said.

What to do with your CDC vaccination card