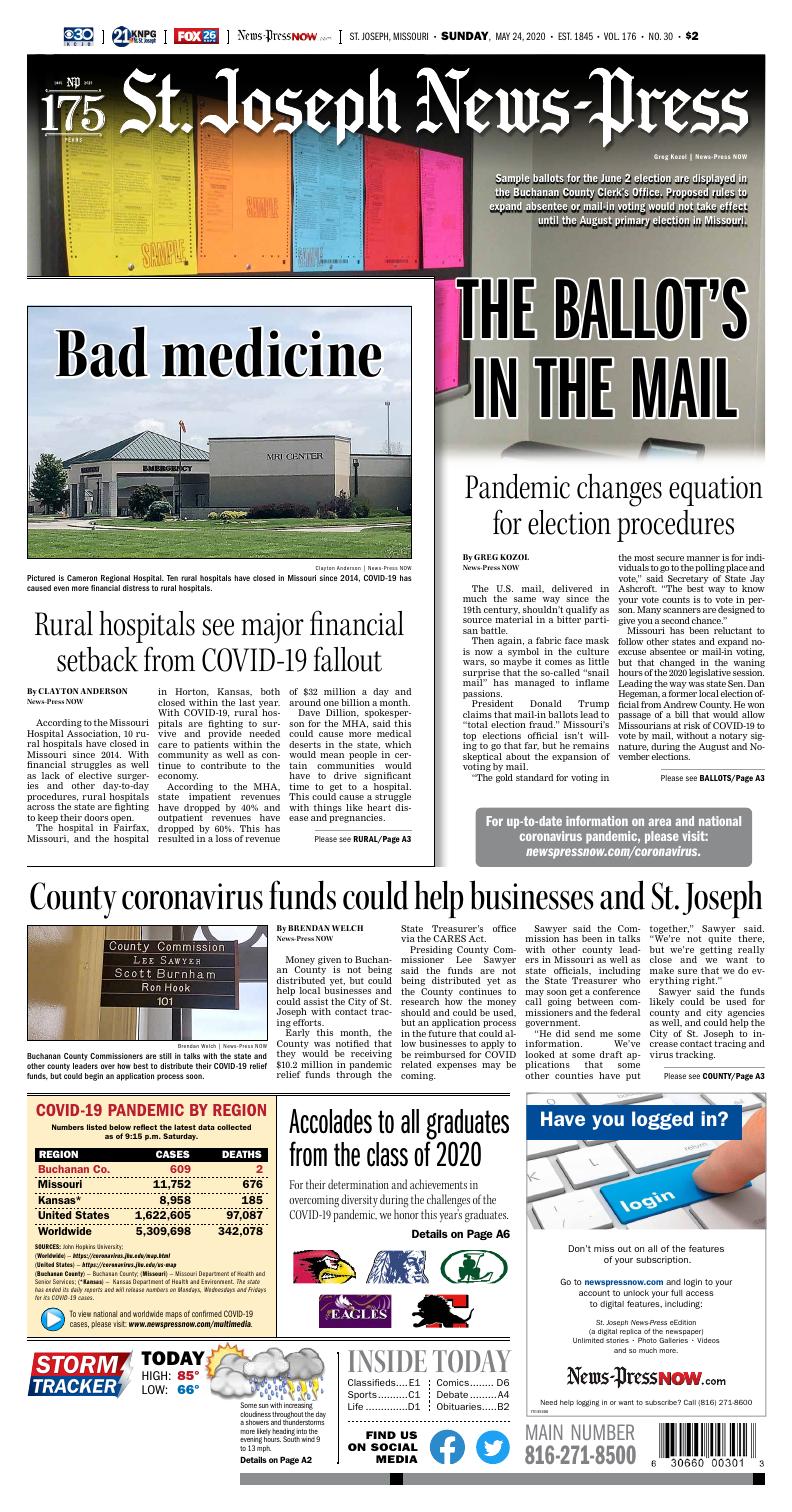 Sample ballots for the June 2 election are displayed in the Buchanan County Clerk’s Office. Proposed rules to expand absentee or mail-in voting would not take effect until the August primary election in Missouri.

The U.S. mail, delivered in much the same way since the 19th century, shouldn’t qualify as source material in a bitter partisan battle.

Then again, a fabric face mask is now a symbol in the culture wars, so maybe it comes as little surprise that the so-called “snail mail” has managed to inflame passions.

President Donald Trump claims that mail-in ballots lead to “total election fraud.” Missouri’s top elections official isn’t willing to go that far, but he remains skeptical about the expansion of voting by mail.

“The gold standard for voting in the most secure manner is for individuals to go to the polling place and vote,” said Secretary of State Jay Ashcroft. “The best way to know your vote counts is to vote in person. Many scanners are designed to give you a second chance.”

Missouri has been reluctant to follow other states and expand no-excuse absentee or mail-in voting, but that changed in the waning hours of the 2020 legislative session. Leading the way was state Sen. Dan Hegeman, a former local election official from Andrew County. He won passage of a bill that would allow Missourians at risk of COVID-19 to vote by mail, without a notary signature, during the August and November elections.

Hegeman views it as a practical matter. Lawmakers received calls from county clerks and constituents who wanted some kind of mail-in option so that voters, especially older Missourians who are at greater risk of complications from the coronavirus, could still participate in the elections even if they were reluctant to go to a poling place.

The bill, which requires the governor’s signature, defines at-risk as anyone who is age 65 or older, living in a nursing home or diagnosed with medical conditions that include diabetes, severe asthma, chronic lung disease or heart problems.

Voters who are not at-risk could vote by mail, but they would need a notary to sign the ballot. A similar notary requirement exists in current law for those who vote absentee because they will be out of town on election day.

Ashcroft opposes this year’s elections bill, saying it creates confusion over the different classifications for voting strictly by mail and for voting absentee, something that could be done in person at a clerk’s office or through the mail. He said it also creates an impression that voting in person is not safe, which he says is far from the truth with a recent push toward social distancing, sanitation and physical barriers at polling sites.

“It’s going to be safer than going to the grocery store,” he said.

Hegeman said he was aware of some of the skepticism of mail-in voting, but he said the bill reflects a limited expansion and won overwhelming support with an emergency clause that allows it to take effect in time for the August election. One reason for the support, he said, was the measure’s expiration date at the end of the year.

“There was some skepticism and some concerns,” he said. “I think we were able to strike a balance.”

Mail-in voting is less of a black-and-white issue for the officials who run elections at the local level. Buchanan County has a list of 850 to 900 voters who are signed up to vote absentee, meaning they could vote by mail or vote prior to election day in the courthouse.

Buchanan County Clerk Mary Baack-Garvey said many of those voters have some sort of disability that makes it difficult to go to the polling sites.

“If we wanted to do an all-mail election, I think that would be extremely costly,” she said. “We have a hard time just getting voter ID cards to our voters. I can’t imagine how many ballots would come back undeliverable.”

That said, Baack-Garvey made it clear that clerks across the state do their best to show compassion to voters while also following the letter of the law. She sees the logic of expanded access to voting by mail during the pandemic, though she believes some of the standards will be hard to verify.

“It needed to be done, just due to this pandemic,” she said. “It’s going to help people to just ensure their safety. If they don’t want to get out and vote, that’s going to allow them to stay home and stay safe and vote at home. So I’m glad this got done.”

Ashcroft said voting by mail remains a political issue because interest groups are using COVID-19 as an opportunity to push an agenda. A new Brennan Center for Justice poll finds that 4 out of 5 Americans believe states should give all voters the option of unexcused mail ballots during the November election.

“It is still more likely for an American to be struck by lightning than to commit mail voting fraud,” the Brennan Center said in a report.

Pictured is Cameron Regional Hospital. Ten rural hospitals have closed in Missouri since 2014, COVID-19 has caused even more financial distress to rural hospitals.

According to the Missouri Hospital Association, 10 rural hospitals have closed in Missouri since 2014. With financial struggles as well as lack of elective surgeries and other day-to-day procedures, rural hospitals across the state are fighting to keep their doors open.

With COVID-19, rural hospitals are fighting to survive and provide needed care to patients within the community as well as continue to contribute to the economy.

Dave Dillion, spokesperson for the MHA, said this could cause more medical deserts in the state, which would mean people in certain communities would have to drive significant time to get to a hospital. This could cause a struggle with things like heart disease and pregnancies.

“In certain parts of the state — less in your area and more in southern Missouri and especially Southeast Missouri — medical deserts are being created to where there isn’t a hospital within 30 minute road travel,” Dillon said.

Dillon said it’s a continued threat with hospitals closing in the immediate future.

“It is a real and present threat. Hospitals could theoretically close at the other side of or during (the pandemic) as we see that members of the workforce decide not to come back. We have issues there,” Dillon said.

There has been some fight for financial support for these rural hospitals. The CARES Act has sent out $10 billion to rural hospitals across the country. According to the American Rural Hospitals Association, five high-impact hospitals in Missouri have received money totaling in around $82 million. While 63 rural hospitals in the state recieved $271 million from the 10$ billion.

“That money was divided up and sent out to hospitals the week before last, and that has served to really help to satisfy some of the financial woes rural hospitals were having as a result of this emergency,” ARHCA Vice President Brock Slabach said.

The importance of rural hospitals has been reflected in economic development of their smaller communities.

“We know 20% of rural economy is supplied by healthcare,” Slabach said. “When the hospital and clinics begin to close, it takes one out of every five dollars out of the economy. It really is not not a good thing, especially as we’ve had such economic downturn over the last two months since the beginning of the public health emergency.”

Buchanan County Commissioners are still in talks with the state and other county leaders over how best to distribute their COVID-19 relief funds, but could begin an application process soon.

Money given to Buchanan County is not being distributed yet, but could help local businesses and could assist the City of St. Joseph with contact tracing efforts.

Early this month, the County was notified that they would be receiving $10.2 million in pandemic relief funds through the State Treasurer’s office via the CARES Act.

Presiding County Commissioner Lee Sawyer said the funds are not being distributed yet as the County continues to research how the money should and could be used, but an application process in the future that could allow businesses to apply to be reimbursed for COVID related expenses may be coming.

Sawyer said the Commission has been in talks with other county leaders in Missouri as well as state officials, including the State Treasurer who may soon get a conference call going between commissioners and the federal government.

“He did send me some information. We’ve looked at some draft applications that some other counties have put together,” Sawyer said. “We’re not quite there, but we’re getting really close and we want to make sure that we do everything right.”

Sawyer said the funds likely could be used for county and city agencies as well, and could help the City of St. Joseph to increase contact tracing and virus tracking.

Sawyer said he spoke with Mayor Bill McMurray about the possibility of using funds to start allowing the Health Department to make followup calls to those who have been contacted to be told that they have been around someone who has tested positive.

Those calls could help ensure that people who may have been in contact with an active case are following the rules and staying home.

Sawyer said he is not sure yet when the County will begin taking applications, and he said many counties across the state still have questions about how the money can best be used.

“Everybody is still, across the state, trying to interpret the right way to make sure that we use the money appropriately and get the biggest bang for the dollars,” Sawyer said. 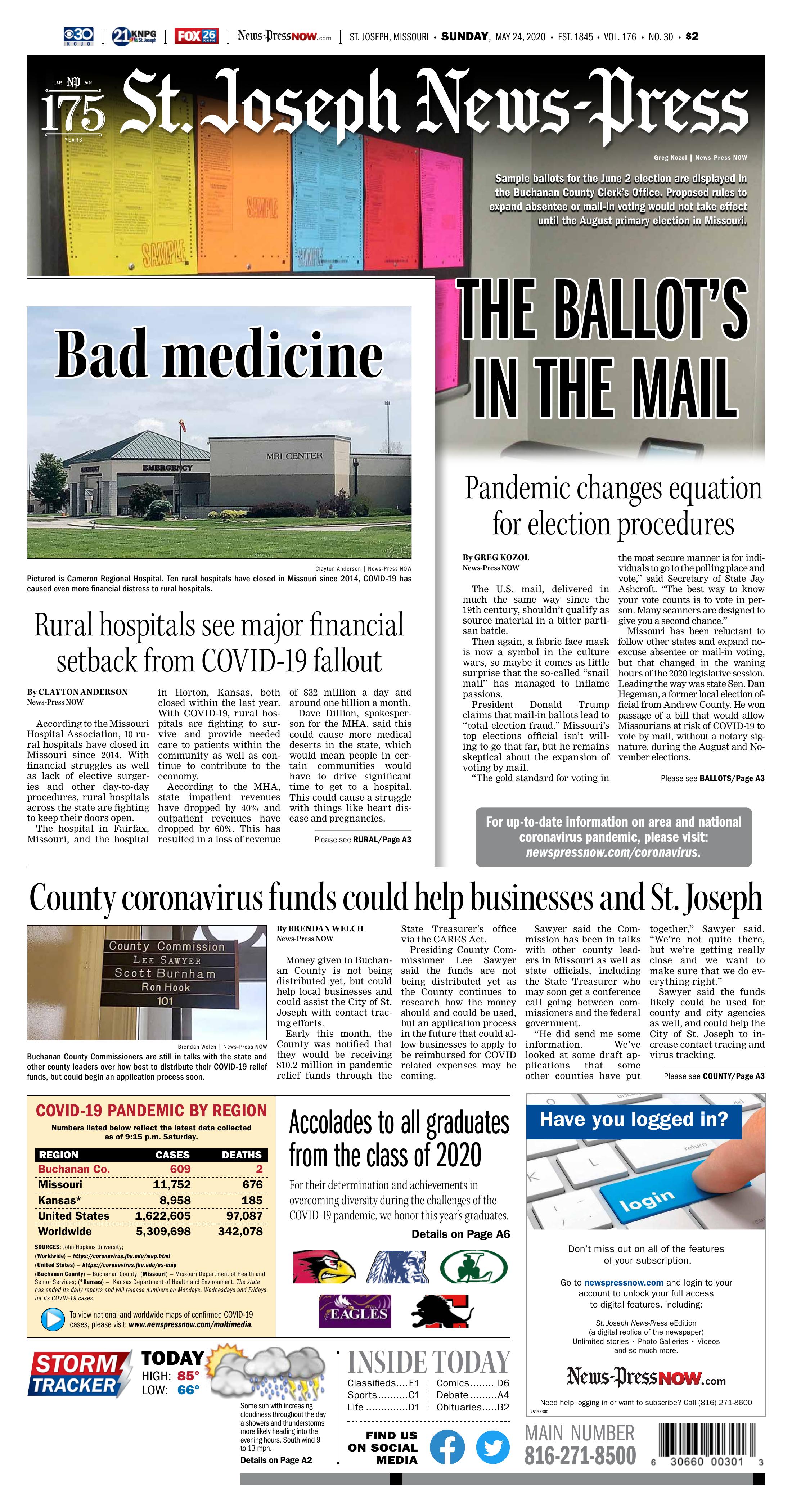