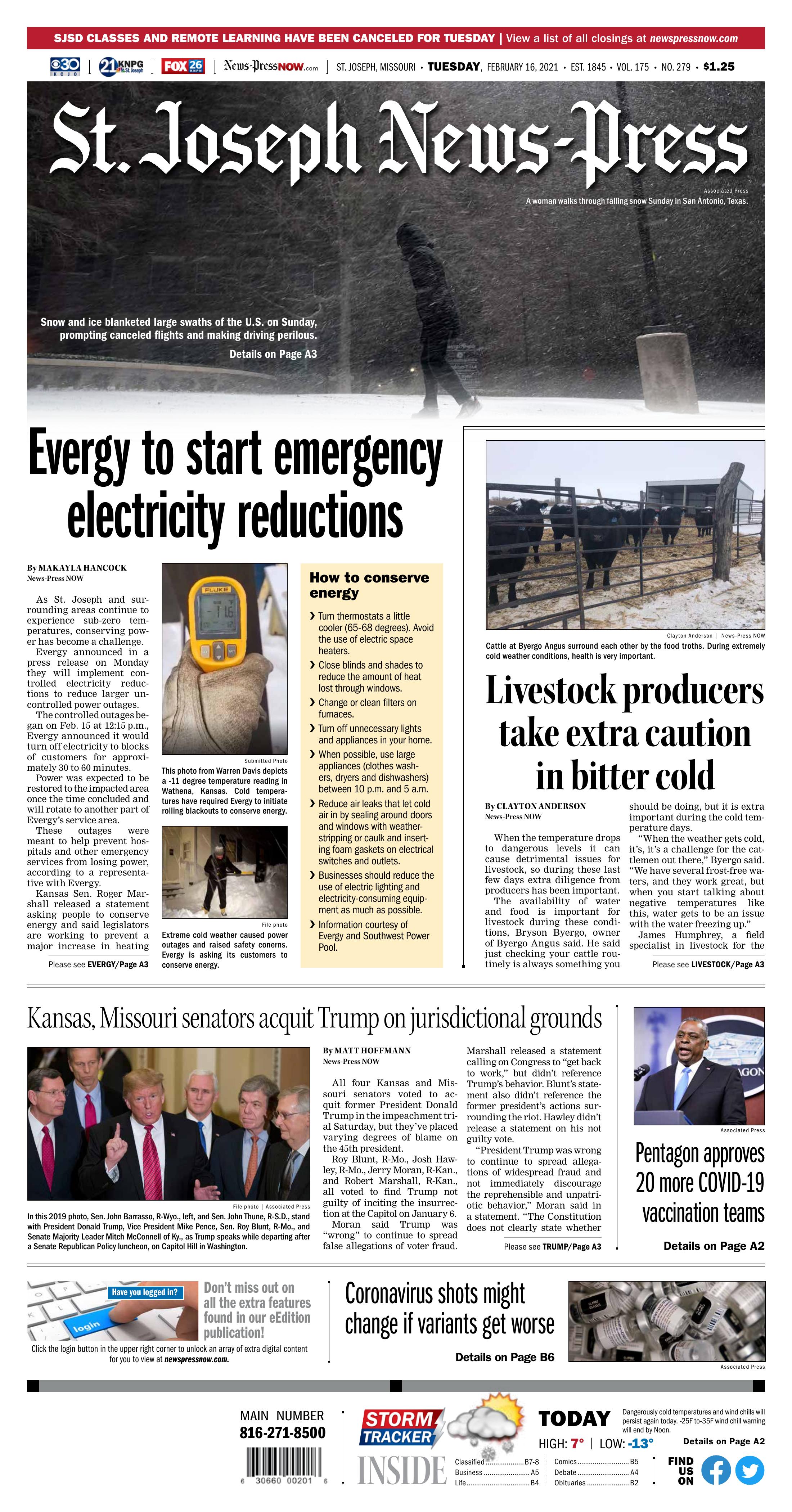 Evergy announced in a press release on Monday they will implement controlled electricity reductions to reduce larger uncontrolled power outages.

The controlled outages began on Feb. 15 at 12:15 p.m., Evergy announced it would turn off electricity to blocks of customers for approximately 30 to 60 minutes.

Power was expected to be restored to the impacted area once the time concluded and will rotate to another part of Evergy’s service area.

These outages were meant to help prevent hospitals and other emergency services from losing power, according to a representative with Evergy.

“We will be doing all we can at the federal level to confirm no foul play or price gouging has occurred and continue to support our utility companies and community leaders as they work diligently to keep Kansans warm. In the meantime, I urge my fellow Kansans to do everything they can to conserve energy and keep energy costs low,” Marshall said.

Evergy also suggests delaying the use of non-essential uses of energy such as washers and dryers during peak hours.

Evergy stated they are working with its large commercial and industrial customers to reduce energy usage as well.

Rachel Bittiker, public affairs and community development director with Community Action Partnership said their shelter still has room for anyone eighteen or older who needs a warm place to stay.

Bittiker said they have seen a slight increase, but not due to the power outages so far.

Dangers of being exposed to extreme temperatures could lead to hypothermia, frostbite and other cold-related illnesses.

“If you must be outside all day, get those hot hands that you can put in your gloves or in with your toes,” Sedlacek said. “Just don’t want to get to the point where you’re having damage to your tissues from the cold.”

How to conserve energy

Cattle at Byergo Angus surround each other by the food troths. During extremely cold weather conditions, health is very important.

When the temperature drops to dangerous levels it can cause detrimental issues for livestock, so during these last few days extra diligence from producers has been important.

The availability of water and food is important for livestock during these conditions, Bryson Byergo, owner of Byergo Angus said. He said just checking your cattle routinely is always something you should be doing, but it is extra important during the cold temperature days.

"When the weather gets cold, it's, it's a challenge for the cattlemen out there," Byergo said. "We have several frost free waters, and they work great, but when you start talking about negative temperatures like this, water gets to be an issue with the water freezing up."

James Humphrey, a field specialist in livestock for the University of Missouri Extension in Andrew County said another thing that can cause concern is calving, which some cattle producers are starting right now. With the calves at such a vulnerable state, extra caution is needed.

"Probably the biggest challenge right now, for a lot of people is if you're calving, if that calf doesn't have some protection when it's born and gets dried off quickly they can freeze down to the ground and freeze to death fairly quickly," Humphrey said. "We need to be checking these animals, probably every hour, or every 30 minutes to an hour,"

Shatto Milk Company in Osborn Missouri put a lot of focus on their cows they milk daily. Owner Barbara Shatto said they are their most important asset and their health is important. They have installed new technology to track health.

“We definitely watch them and monitor them closely, we also have a special software program that monitors their health on a regular basis, all throughout the day, their temperatures, how much they're eating, and drinking and moving around,” Shatto said.

Shatto and Byergo both agree that no matter the temperature it is always important to spend time with the livestock and closely monitor the behavior and health.

All four Kansas and Missouri senators voted to acquit former President Donald Trump in the impeachment trial Saturday, but they’ve placed varying degrees of blame on the 45th president.

Roy Blunt, R-Mo., Josh Hawley, R-Mo., Jerry Moran, R-Kan., and Robert Marshall, R-Kan., all voted to find Trump not guilty of inciting the insurrection at the Capitol on January 6.

Moran said Trump was “wrong” to continue to spread false allegations of voter fraud. Marshall released a statement calling on Congress to “get back to work,” but didn’t reference Trump’s behavior. Blunt’s statement also didn’t reference the former president’s actions surrounding the riot. Hawley didn’t release a statement on his not guilty vote.

“President Trump was wrong to continue to spread allegations of widespread fraud and not immediately discourage the reprehensible and unpatriotic behavior,” Moran said in a statement. “The Constitution does not clearly state whether a former president can be tried for impeachment by the Senate, but I believe the impeachment process is intended to be used for considering whether or not ‘The President’ should be removed from office.”

In a statement, Blunt said impeachment shouldn’t be used to “settle political scores.”

“I said before this trial started that I believe the constitutional purpose for presidential impeachment is to remove a president from office, not to punish a person after they have left office,” Blunt said. “None of the arguments presented changed my view that this was an unconstitutional proceeding. Impeachment is not a tool that should be used to settle political scores against a private citizen.”

Marshall’s statement was more robust, though he did not condemn Trump’s actions like Moran.

“What was the motivation of this trial? The motivation was political hatred and was simply a continuation of the four-year impeachment fixation on the part of the House Managers and the Democrat Party,” Marshall said. “Let me be clear, both sides of the aisle are guilty of heated rhetoric. But, equally guilty are the House Managers and the Democrats for their hypocrisy, and President Trump’s defense team painted that picture clearly.”

Trump’s second impeachment vote was the most bipartisan in history, with seven Republicans voting with all 50 Democrats to convict him. In a blistering floor speech after his acquittal vote, Senate Minority Leader Mitch McConnell, R-Ky, blasted Trump for his behavior, calling him “morally responsible,” but not legally so.

“There is no question, none, that President Trump is practically and morally responsible for provoking the event of that day,” McConnell said.

Extra Care Needed For Livestock In The Cold