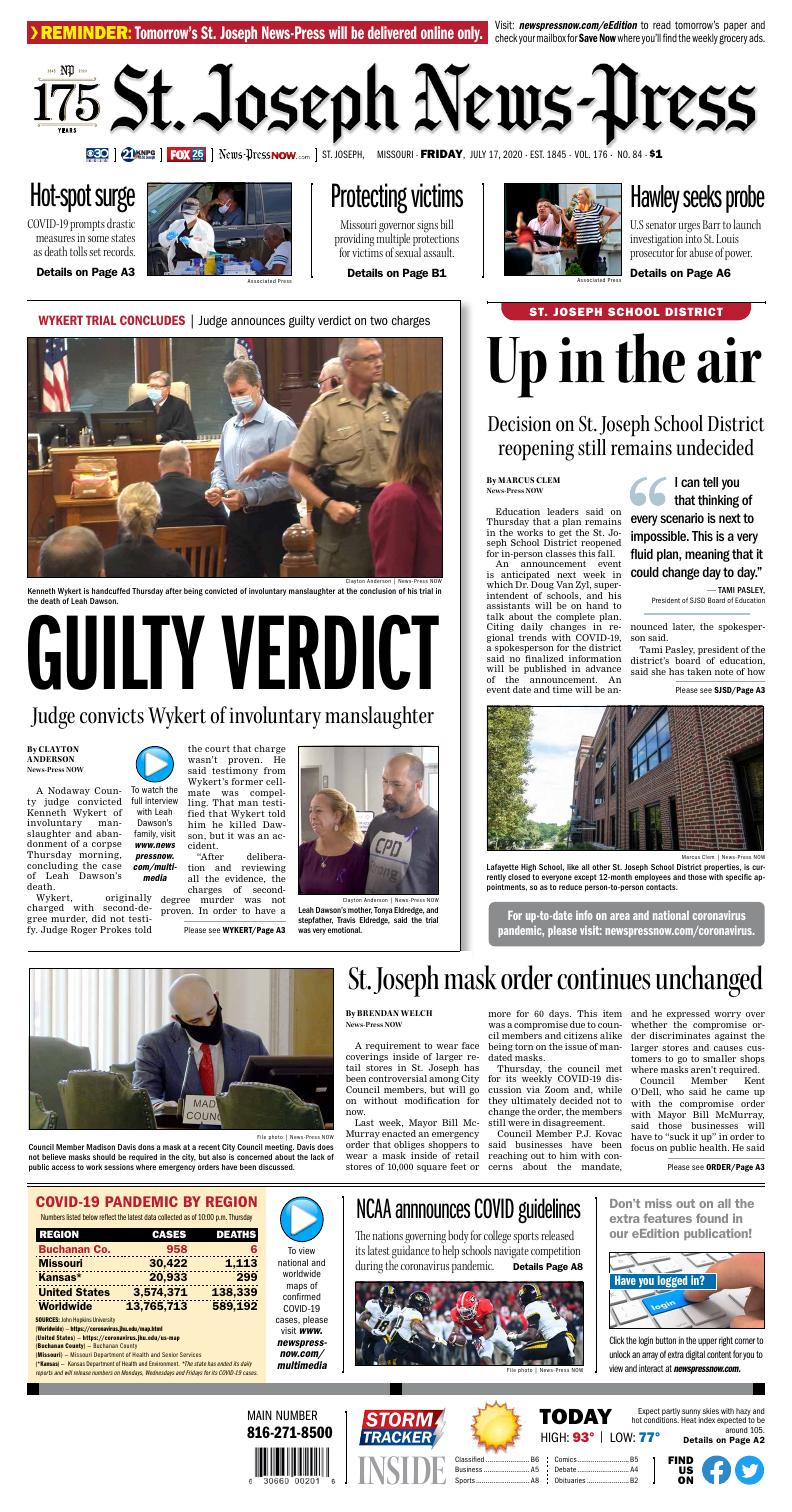 Kenneth Wykert is handcuffed Thursday after being convicted of involuntary manslaughter at the conclusion of his trial in the death of Leah Dawson.

Kenneth Wykert is sworn in Wednesday before he chose to waive his right to testify.

Wykert, originally charged with second-degree murder, did not testify. Judge Roger Prokes told the court that charge wasn’t proven. He said testimony from Wykert’s former cellmate was compelling. That man testified that Wykert told him he killed Dawson, but it was an accident.

“After deliberation and reviewing all the evidence, the charges of second-degree murder was not proven. In order to have a second-degree murder to be convicted, the burden is placed to show that the defendant knowfully caused the death of another person... could not find any information of the knowing cause of death,” Prokes said during his announcement of the verdict.

Leah Dawson’s mother, Tonya Eldredge, said she was upset Wykert did not get convicted of murder, but is happy some justice has came.

“I wasn’t happy. But I’m glad that we did get a guilty verdict,” Eldredge said “I’m so happy that he got the abandonment charge, because he’s hurt so many girls, and not only am I happy that he got convicted of this, I’m just upset that it took my daughter being killed to save so many other people out there because he’s hurt so many girls that are scared of him.”

The state’s prosecuter, Erik Tate, said there were challenges from the nature of the case that made it difficult to show second-degree murder.

Although Wykert’s attorney, Josh Smith, said law enforcement had tunnel vision in his closing argument and only pursued certain leads, Tate said he felt law enforcement did a great job.

“I don’t think there was tunnel vision,” Tate said. “There’s a lot of evidence that didn’t come out in the trial, there were a lot of leads that were followed.”

Smith said he does not believe evidence for involuntary manslaughter was there and does not think Wykert’s cellmate Russell Fronterhouse was credible.

“I respect Judge Prokes. I think he is fair and honest, and I just disagree with what the evidence was in this case. As far as our opinion, we don’t believe Mr. Fronterhouse was credible,” Smith said.

The defense questioned the police work of the DeKalb County Sheriff’s Office and assisting agencies. Sheriff Kasey Keesaman said it was a tough time for the department, after losing both former Sheriff Andy Clark and Investigator I.B. Fugate, who both worked on this case.

“It’s obviously not the result that we were looking for, but I am happy that it came, that there was some level of justice as for this young lady and for a family this was a tough case and the prosecutor did an awesome job. I presented the evidence that we could on this case,” Keesaman said.

Dawson’s family said her legacy will live on and although she had her battles with drugs, they believe she was trying to get clean before returning to her kids and that she loved her two young boys.

“Leah loved her kids, and she loved that baby that he killed her too,” Eldredge said. “To know that not only did did he kill my daughter, but he killed an innocent child, and he took he took Joseph and Isaac’s (Leah’s sons) mother away from them.”

Lafayette High School, like all other St. Joseph School District properties, is currently closed to everyone except 12-month employees and those with specific appointments, so as to reduce person-to-person contacts.

Correction: An earlier online version of this story incorrectly listed the St. Joseph School District board of education's next meeting date. It is Monday, July 27.

Education leaders said on Thursday that a plan remains in the works to get the St. Joseph School District reopened for in-person classes this fall.

An announcement event is anticipated next week in which Dr. Doug Van Zyl, superintendent of schools, and his assistants will be on hand to talk about the complete plan. Citing daily changes in regional trends with COVID-19, a spokesperson for the district said no finalized information was to be published in advance of the announcement event, which took place on the morning of July 20.

Tami Pasley, president of the district’s board of education, said she has taken note of how the state of Kansas and some districts in Missouri have opted to delay the start of fall classes as late as Labor Day. At this time, Monday, Aug. 24, is envisioned in as the start day for in-person classes in St. Joseph, she said. The board will handle additional business on Monday, June 27, in a meeting at the district office, the first meeting that will permit a limited in-person audience since the pandemic began.

“It’s about a 50-50 in that some people feel that we shouldn’t go back right away and some people think that we need to be back in school by Aug. 24,” she said. “We’re just using the best information that we have from the best sources to make the decision to start back.

“I feel like, myself, we’re just prolonging the inevitable if we push it back to September. Then, maybe, what keeps us from pushing it back to October? But, a lot can change between now and Aug. 24, which is the supposed start date,” she said.

SJSD accidentally published some re-entry information earlier this week. Saved document imagery has been circulating on Facebook, the district acknowledged. While the information is likely to be changed before Monday, at the time of its release the documents envisioned an online academy for those unable to attend class for the sake of medical concerns.

Those who decide on their own to opt-in to online education would have a deadline of Friday, July 31, to do so.

Such an online academy would serve as a fallback in case pandemic conditions worsen to the point where it is not safe to have in-person education. Some key annual events, like enrollment and back to school nights, are slated to be conducted online regardless of local pandemic severity.

Pasley said she has reviewed the overall preliminary plan in its current form and has full confidence in district leadership in light of the course set forth.

“I can tell you that thinking of every scenario is next to impossible. This is a very fluid plan, meaning that it could change day to day,” she said.

Council Member Madison Davis dons a mask at a recent City Council meeting. Davis does not believe masks should be required in the city, but also is concerned about the lack of public access to work sessions where emergency orders have been discussed.

A requirement to wear face coverings inside of larger retail stores in St. Joseph has been controversial among City Council members, but will go on without modification for now.

Last week, Mayor Bill McMurray enacted an emergency order that obliges shoppers to wear a mask inside of retail stores of 10,000 square feet or more for 60 days. This item was a compromise due to council members and citizens alike being torn on the issue of mandated masks.

Thursday, the council met for its weekly COVID-19 discussion via Zoom and, while they ultimately decided not to change the order, the members still were in disagreement.

Council Member P.J. Kovac said businesses have been reaching out to him with concerns about the mandate, and he expressed worry over whether the compromise order discriminates against the larger stores and causes customers to go to smaller shops where masks aren’t required.

Council Member Kent O’Dell, who said he came up with the compromise order with Mayor Bill McMurray, said those businesses will have to “suck it up” in order to focus on public health. He said the order will at least help keep the virus from spreading at busy checkouts in larger stores.

He said he supported the softer requirement due to the fact that the virus wasn’t spreading too heavily in St. Joseph, and changes could be made if the numbers were to go up.

“When we mandated the 10,000-plus square footage (rule), we weren’t backs against the wall, we weren’t overwhelmed, we didn’t have some outrageous numbers and, as you see now, the numbers are falling,” O’Dell said.

The state reported 958 total cases in Buchanan County on Thursday, an increase of three since Wednesday. According to the City of St. Joseph Health Department, 14 people continued to be in the hospital in St. Joseph due to COVID-19.

While Kovac does not want any mandates, he did not want to see the order changed at this time.

Council Member Brenda Blessing had said at last week’s meeting that she wanted the mask mandate to include all indoor spaces, but it is important to stick with a decision in order to not keep the public on its toes wondering what will change each week.

On Thursday, she maintained that opinion as the council debated possible changes.

“We’re only at the beginning of this and we’re going to, every week, be second-guessing what we’re doing ... we’ve got to let the plan work,” Blessing said.

Council member Marty Novak agreed with not changing the order.

Council Member Russell Moore said he does want the order to change in order to include all indoor spaces. Council Member Brian Myers agreed, saying that many states and cities around St. Joseph have made such mandates.

“We’re not the largest city in the state, but I do think we have enough cases here and enough risk of spreading this that it does warrant having a blanket mandate for masks indoors in public,” Myers said. “I think what we did last week was probably worse than doing nothing at all.”

He said the compromise order only caused more disagreements in the city and among the council.

Council Member Madison Davis agreed with Kovac that there shouldn’t be a mask requirement, but said it made more sense to either require masks in all spaces or not at all.

He also was concerned about the way the decisions on the COVID-19 orders had been made, calling criticism to the weekly Zoom work sessions.

“We’re continuing to have meetings and make decisions where the public is not able to comment,” Davis said. “Last week, we made it a vote before the public even had a chance to comment and today we’re making motions in a meeting where there isn’t even official motions taken. It’s completely ridiculous.”

At the end of the work session, three public commenters did speak, all of whom wanted to see masks mandated in all indoor spaces. One of this commenters, Elizabeth Sawin, said she did not believe masks were a violation of civil liberties, which was a conversation had at last week’s meeting.

“When I heard last week people saying this is an infringement on our liberty, I think that’s a false argument,” Sawin said. “Do we not stop for red lights and school buses? Do we pay taxes or have a driver’s license? All of these are reasonable and lawful accommodations so we can live together, not die together.”

The council is scheduled to meet again next Thursday to discuss the ongoing crisis. 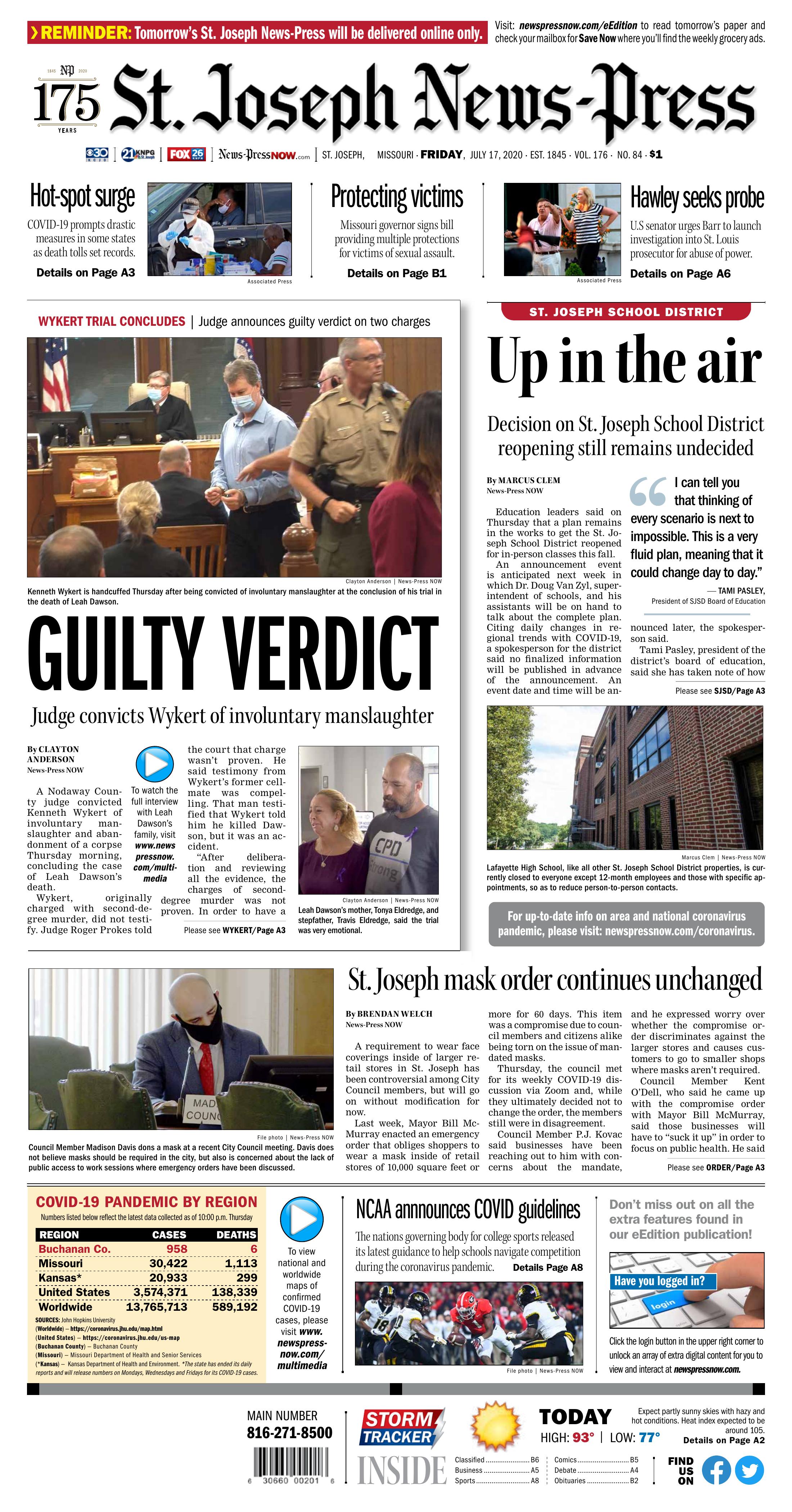 Schools out, but for how long?