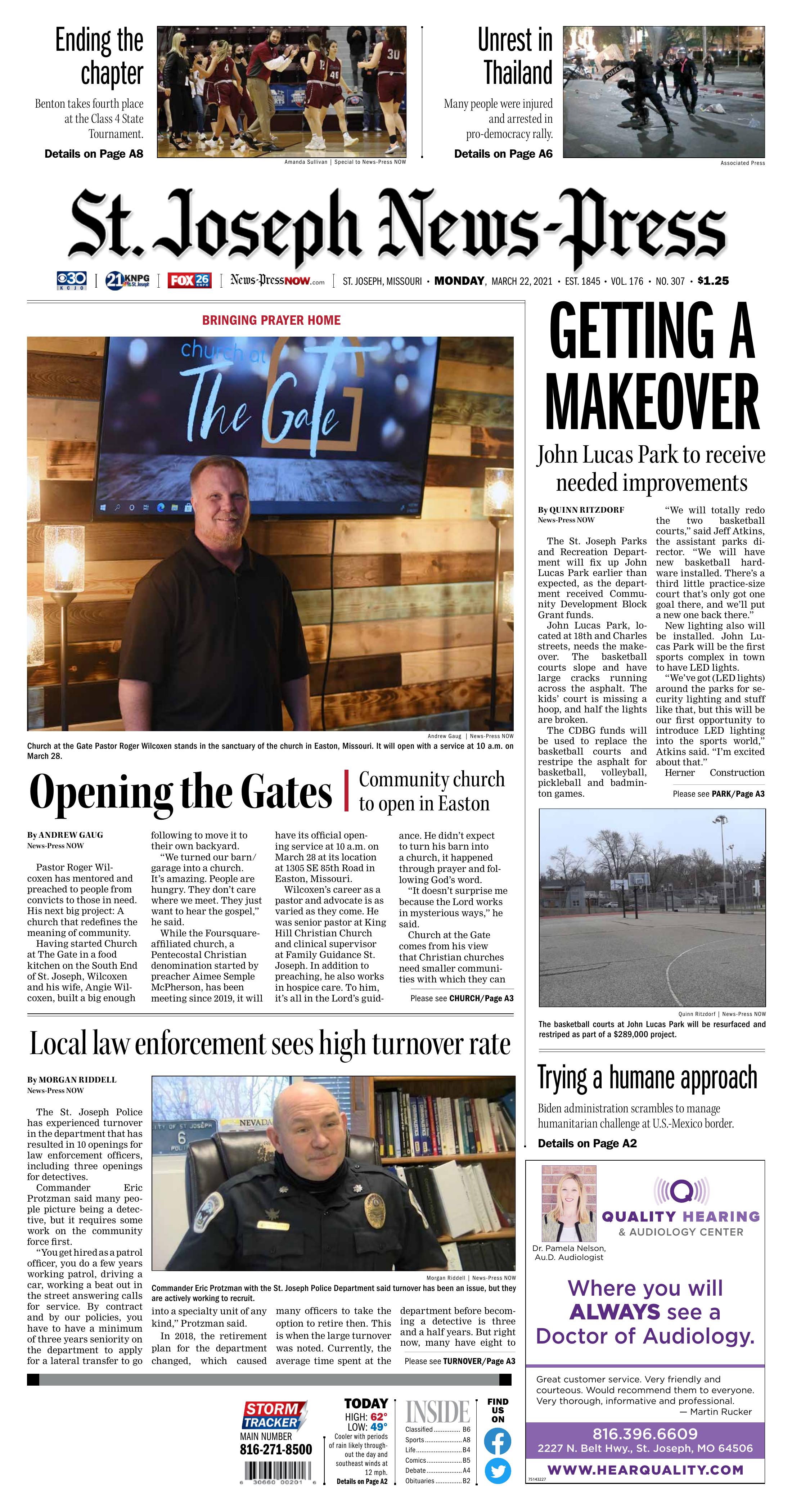 Church at the Gate Pastor Roger Wilcoxen stands in the sanctuary of the church in Easton, Missouri. It will open with a service at 10 a.m. on March 28.

Pastor Roger Wilcoxen has mentored and preached to people from convicts to those in need. His next big project: A church that redefines the meaning of community.

Having started Church at The Gate in a food kitchen on the South End of St. Joseph, Wilcoxen and his wife, Angie Wilcoxen, built a big enough following to move it to their own backyard.

“We turned our barn/garage into a church. It’s amazing. People are hungry. They don’t care where we meet. They just want to hear the gospel,” he said.

While the Foursquare-affiliated church, a Pentecostal Christian denomination started by preacher Aimee Semple McPherson, has been meeting since 2019, it will have its official opening service at 10 a.m. on March 28 at its location at 1305 SE 85th Road in Easton, Missouri.

Wilcoxen’s career as a pastor and advocate is as varied as they come. He was senior pastor at King Hill Christian Church and clinical supervisor at Family Guidance St. Joseph. In addition to preaching, he also works in hospice care. To him, it’s all in the Lord’s guidance. He didn’t expect to turn his barn into a church, it happened through prayer and following God’s word.

“It doesn’t surprise me because the Lord works in mysterious ways,” he said.

Church at the Gate comes from his view that Christian churches need smaller communities with which they can connect, grow and share their perspectives.

“I want to say this is in a polite way: We don’t need more country clubs, where you come to church on a Sunday morning and you leave and don’t talk to nobody,” he said.

The church celebrates community through its worship and children’s services. Once per month, it holds a Family Sunday service where the floor is opened up to its church members to talk. It’s all done without judgment.

“We’re about building relationships, doing life together and making those positive changes in people’s lives. You know, helping them through some difficult times, crying and being mad together, and not being afraid to be mad, because you’re not going to get judged for it,” Wilcoxen said.

The Church’s beliefs are based on The Foursquare Church’s mission, like the verbal inspiration of the Bible, the doctrine of the Trinity, the baptism of the Holy Spirit and the deity of Jesus Christ. Wilcoxen said the church hits people on a more human level.

“It doesn’t have all that fluff and all that other junk. We preach from the scriptures ... no different than your typical church. But we let the Holy Spirit do the work of transformation. It’s not my job, it’s nobody else’s job, we are all in our walks at different levels,” he said.

At Church at the Gate people can, as Jesus preached, come as they are. Wilcoxen said he’ll often preach in a button up shirt and blue jeans. The idea is to be welcoming, not stuffy.

The idea was novel and caught on quickly, starting at a food kitchen in Jan. 2020 before it moved to the Agency Community Center in Agency, Missouri, and ending up in Easton, Missouri.

“Everybody kept telling us ‘This is the worst year to start a church.’ I’m like, ‘No, I don’t think so. This is a year people need hope the most,’” Wilcoxen said.

While the exterior of the church looks like a garage, minus the church’s logos, it immediately feels like walking into a home when people enter. Edison lights and a giant screen light up the building, while rows of chairs outline the perimeter of the worship floor. The children’s worship service and restrooms for the church are located in the Wilcoxen’s home. When you’re outside, you’ll likely be greeted by Wilcoxen’s donkeys.

The numbers don’t matter to the church, Wilcoxen said, as long as they have people growing in their faith and friendships with each other.

“A lot of people look at church attendance as being how many is there on Sunday morning. We don’t see it that way. We see it from the perspective of how many people are connected with us,” he said.

With a leadership that includes assisting pastor Skip Crisp and his wife Amy, Wilcoxen said the work is beginning and if they continue to grow, will likely have to look for another space.

“One of the common things people say is ‘I feel like home.’ Once we outgrow this, we will get our land and property somewhere. But we plan on keeping that same home-y feeling when you walk in,” he said.

Church at the Gate is open to all people. For church group information, visit http://churchatthe gate.life.

The basketball courts at John Lucas Park will be resurfaced and restriped as part of a $289,000 project.

John Lucas Park, located at 18th and Charles streets, needs the makeover. The basketball courts slope and have large cracks running across the asphalt. The kids’ court is missing a hoop, and half the lights are broken.

The CDBG funds will be used to replace the basketball courts and restripe the asphalt for basketball, volleyball, pickleball and badminton games.

“We will totally redo the two basketball courts,” said Jeff Atkins, the assistant parks director. “We will have new basketball hardware installed. There’s a third little practice-size court that’s only got one goal there, and we’ll put a new one back there.”

New lighting also will be installed. John Lucas Park will be the first sports complex in town to have LED lights.

“We’ve got (LED lights) around the parks for security lighting and stuff like that, but this will be our first opportunity to introduce LED lighting into the sports world,” Atkins said. “I’m excited about that.”

Parks officials were planning on fixing up John Lucas Park with CIP funds in Fiscal Year 2022. However, the project was moved up when the department received CDBG money.

CIP funds for projects only become available during the year those projects are scheduled for. Projects can be moved up in the schedule, but that means some other work would have to be pushed back to a later date.

“Hopefully now with the additional funding, we might be able to air condition the entire building, address some ADA concerns we’ve got there with restrooms,” Atkins said. “We had money to try to work on the gym area, but now that we’re able to add the money from the John Lucas project, we’ll be able to expand that project.”

Commander Eric Protzman with the St. Joseph Police Department said turnover has been an issue, but they are actively working to recruit.

The St. Joseph Police has experienced turnover in the department that has resulted in 10 openings for law enforcement officers, including three openings for detectives.

Commander Eric Protzman said many people picture being a detective, but it requires some work on the community force first.

“You get hired as a patrol officer, you do a few years working patrol, driving a car, working a beat out in the street answering calls for service. By contract and by our policies, you have to have a minimum of three years seniority on the department to apply for a lateral transfer to go into a specialty unit of any kind,” Protzman said.

In 2018, the retirement plan for the department changed, which caused many officers to take the option to retire then. This is when the large turnover was noted. Currently, the average time spent at the department before becoming a detective is three and a half years. But right now, many have eight to 10 years experience while others have less than three.

“We’ve created a vacuum into detectives and they’re very young and energetic. They’re very hard-working but a lot of people that have very little time in detectives,” Protzman said. “It creates a little bit of a gap for us as an organization because as you do things, you get really good at doing things. When you have less experience it’s a little harder to work those cases, develop those leads, work that information.”

The gap in ages and experience is not necessarily a bad thing in the department, but it is not ideal. Protzman said a goal is to hire and keep officers local. This has taken some work, and a lack of funding for more incentives doesn’t help.

“We’ve been working on recruiting heavily. We’ve made some adjustments to hire a lot more people that are not already certified as police officers then paying them while they are attending law enforcement academy, so we’ve worked on that the last few years to get more people in,” he said.

“There’s always talk about incentivizing. A lot of departments put bonuses to get people to come in. Where’s that money going to come from though? Allocating those funds from somewhere, those funds have got to be there, and a lot of cities and organizations are cash-strapped. But we have looked at those ideas and are looking at those ideas.”

Protzman said the St. Joseph Police Department is the best one he’s worked for, and he wants to encourage those who many find the field appealing to go for it.

“We want to encourage people even though there is that discord with law enforcement and it’s not maybe the greatest occupation to get into, it is rewarding,” he said. “Most everybody gets into law enforcement to go out and help those that are in distress, those that are being abused or taken victim of somebody else.”