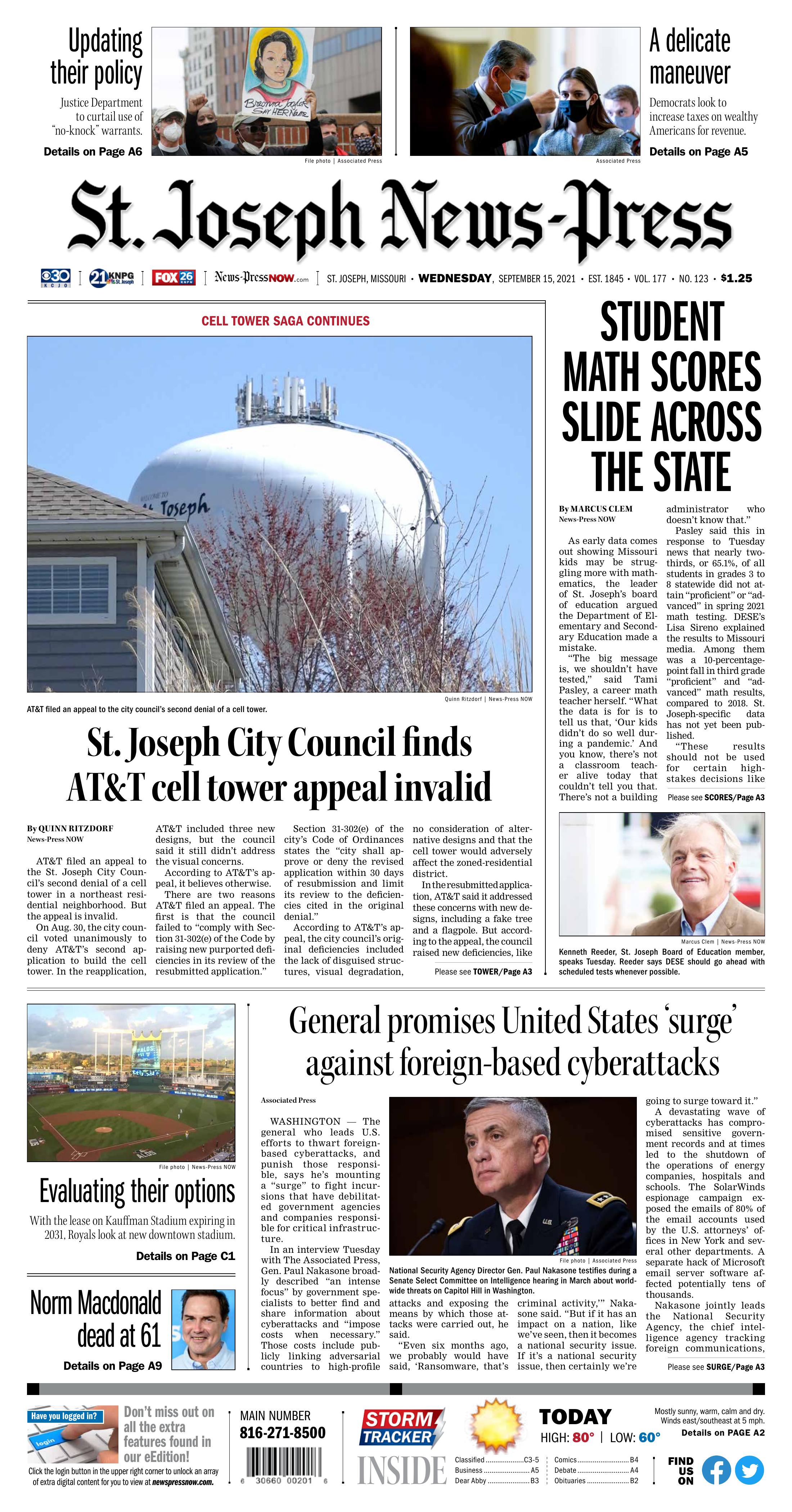 As early data comes out showing Missouri kids may be struggling more with mathematics, the leader of St. Joseph’s board of education argued the Department of Elementary and Secondary Education made a mistake.

“The big message is, we shouldn’t have tested,” said Tami Pasley, a career math teacher herself. “What the data is for is to tell us that, ‘Our kids didn’t do so well during a pandemic.’ And you know, there’s not a classroom teacher alive today that couldn’t tell you that. There’s not a building administrator who doesn’t know that.”

Pasley said this in response to Tuesday news that nearly two-thirds, or 65.1%, of all students in grades 3 to 8 statewide did not attain “proficient” or “advanced” in spring 2021 math testing. DESE’s Lisa Sireno explained the results to Missouri media. Among them was a 10-percentage-point fall in third grade “proficient” and “advanced” math results, compared to 2018. St. Joseph-specific data has not yet been published.

“These results should not be used for certain high-stakes decisions like student grades or teacher evaluations. They just can’t be interpreted in the same way as in previous years,” said Sireno, the standards and assessment administrator. “And when looking at the result, it’s so important to understand what was happening at the local level and the setting for learning for students.”

Pasley described her viewpoint that it is not that helpful to talk about how people should keep the pandemic in mind when looking at these numbers.

“You know, we really have to realize that probably these aren’t the best scores,” Pasley said. “And, you know, again, the decision of DESE to test our students last spring is still perplexing to most people in the education community.”

For Savannah R-III Superintendent Eric Kurre, an initial reckoning shows “proficient” and “advanced” math scores exceed 60% of the total for his own students, much better than the statewide figure. But that is likely because, Kurre said, his district kept 81% of pupils in the classroom for the duration of the 2020-21 year.

“Our teachers did a wonderful job with that, but that was because they had the kids there in person,” Kurre said. “It really cut down on the ‘COVID slide,’ you might say.”

“Districts are permitted to share individual student reports with families in their district so they can see how their child performed on the assessments,” McGowin said. “District- and building-level assessment results will then be shared publicly later this fall.”

St. Joseph school board member Kenneth Reeder said, at the end of the day, testing should be done each year and the public should be made aware of the results as soon as possible.

“It is always better to know about this stuff than to be wandering around in the dark,” he said. “I can’t imagine why anyone would not want to know.”

AT&T filed an appeal to the city council’s second denial of a cell tower.

AT&T filed an appeal to the St. Joseph City Council’s second denial of a cell tower in a northeast residential neighborhood. But the appeal is invalid.

On Aug. 30, the city council voted unanimously to deny AT&T’s second application to build the cell tower. In the reapplication, AT&T included three new designs, but the council said it still didn’t address the visual concerns.

According to AT&T’s appeal, it believes otherwise. 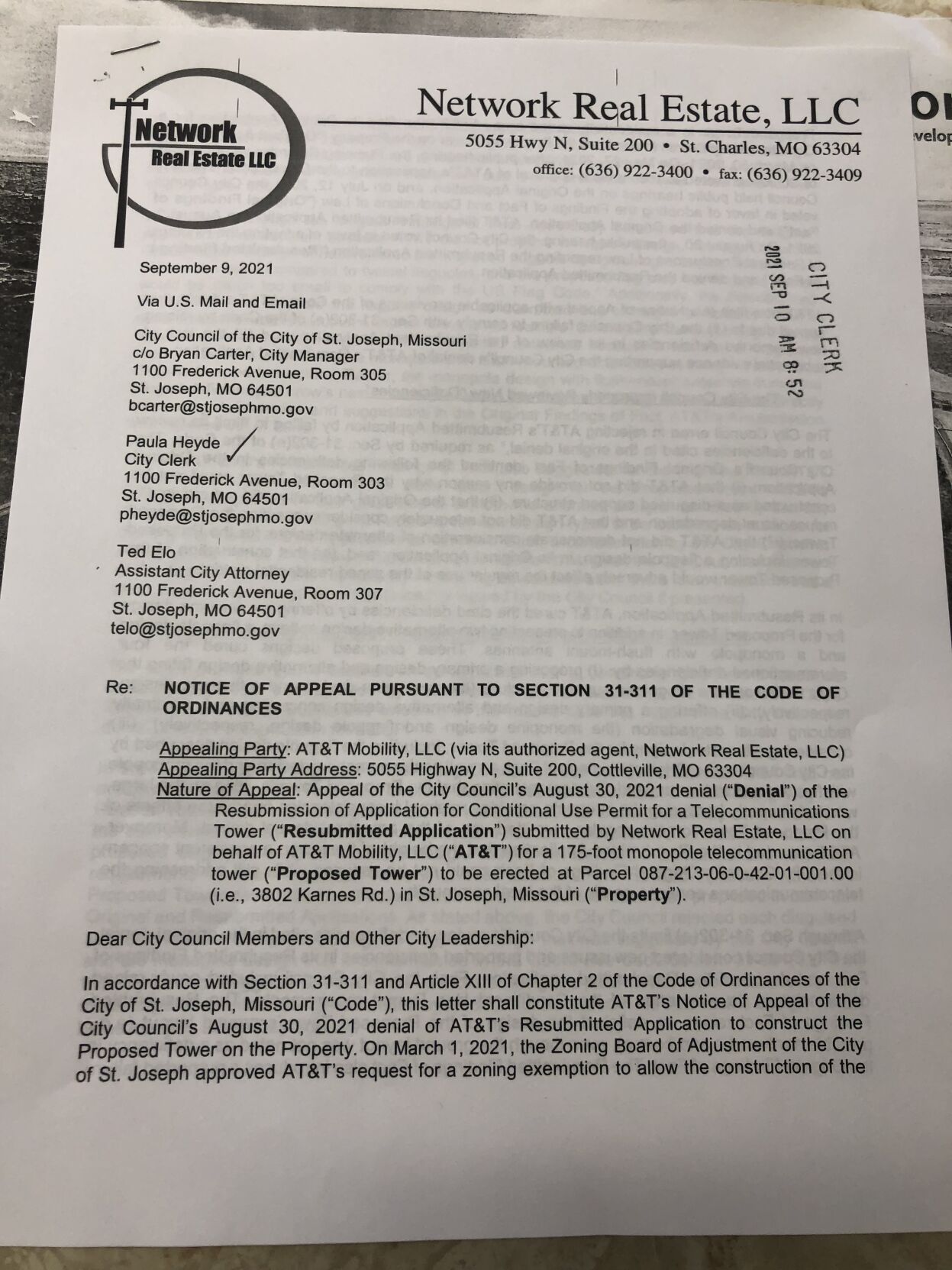 There are two reasons AT&T filed an appeal. The first is that the council failed to “comply with Section 31-302(e) of the Code by raising new purported deficiencies in its review of the resubmitted application.” 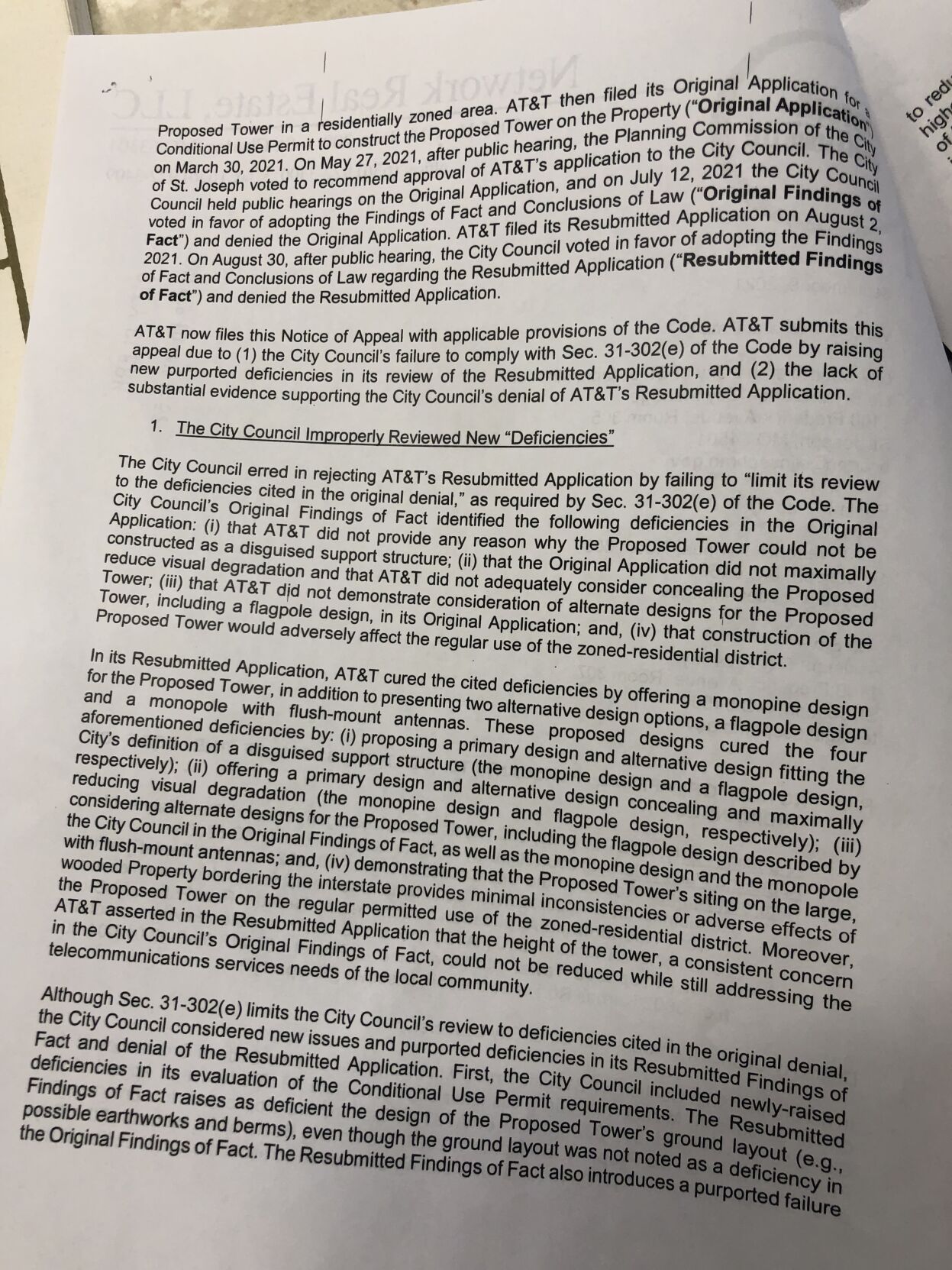 Section 31-302(e) of the city’s Code of Ordinances states the “city shall approve or deny the revised application within 30 days of resubmission and limit its review to the deficiencies cited in the original denial.”

According to AT&T’s appeal, the city council’s original deficiencies included the lack of disguised structures, visual degradation, no consideration of alternative designs and that the cell tower would adversely affect the zoned-residential district.

In the resubmitted application, AT&T said it addressed these concerns with new designs, including a fake tree and a flagpole. But according to the appeal, the council raised new deficiencies, like the “ground layout” and the “failure to consider a site with slightly higher elevation.”

“Despite directly addressing the deficiencies and suggestions in the original Findings of Fact, AT&T’s resubmission was rejected out of hand,” said the appeal. 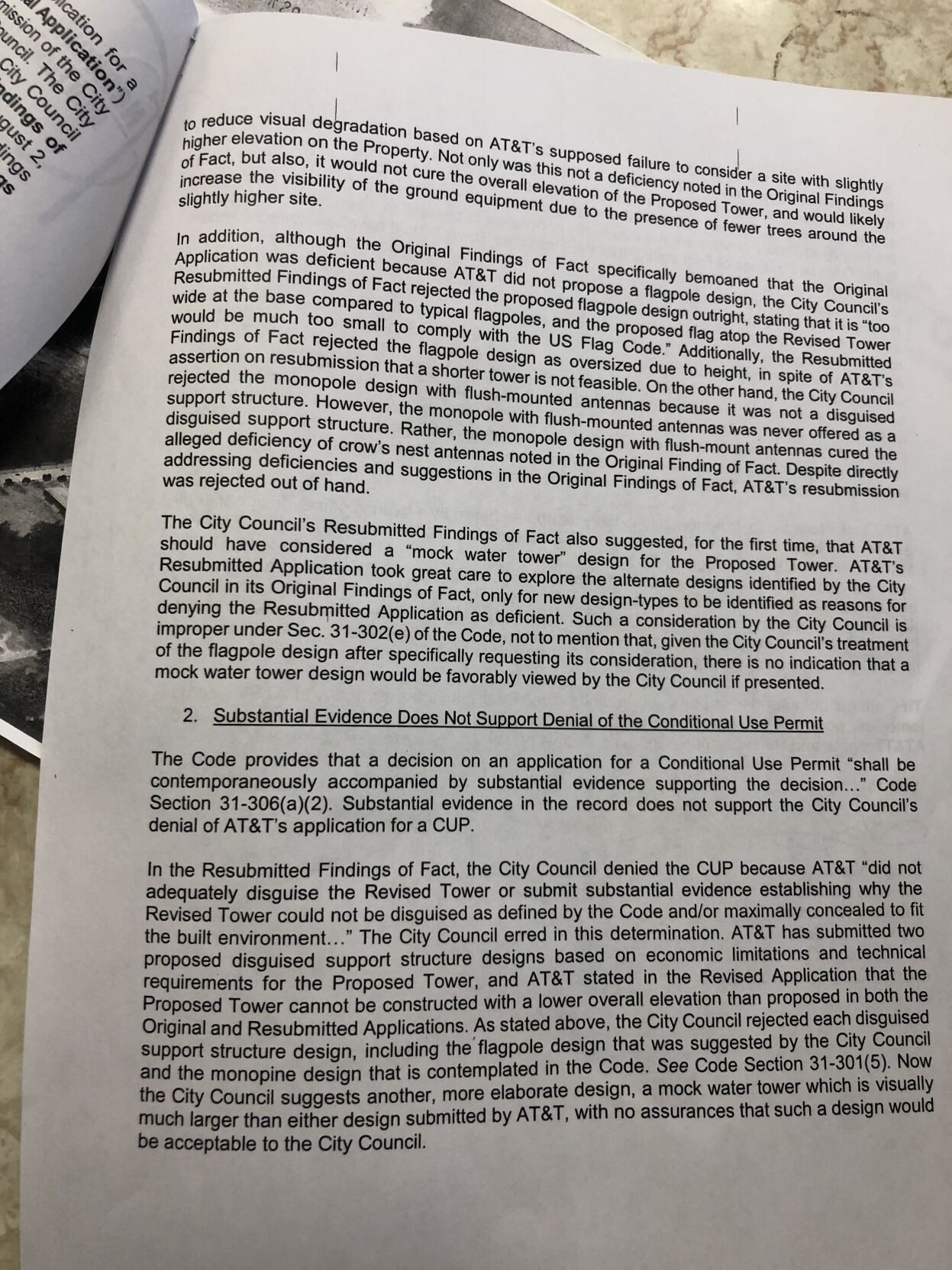 The second reason AT&T filed the appeal is because of the “lack of substantial evidence supporting the city council’s denial of AT&T’s resubmitted application.”

The council denied the resubmitted application because “AT&T did not adequately disguise the revised tower or submit substantial evidence establishing why the revised tower could not be disguised … or maximally concealed to fit the built environment.” 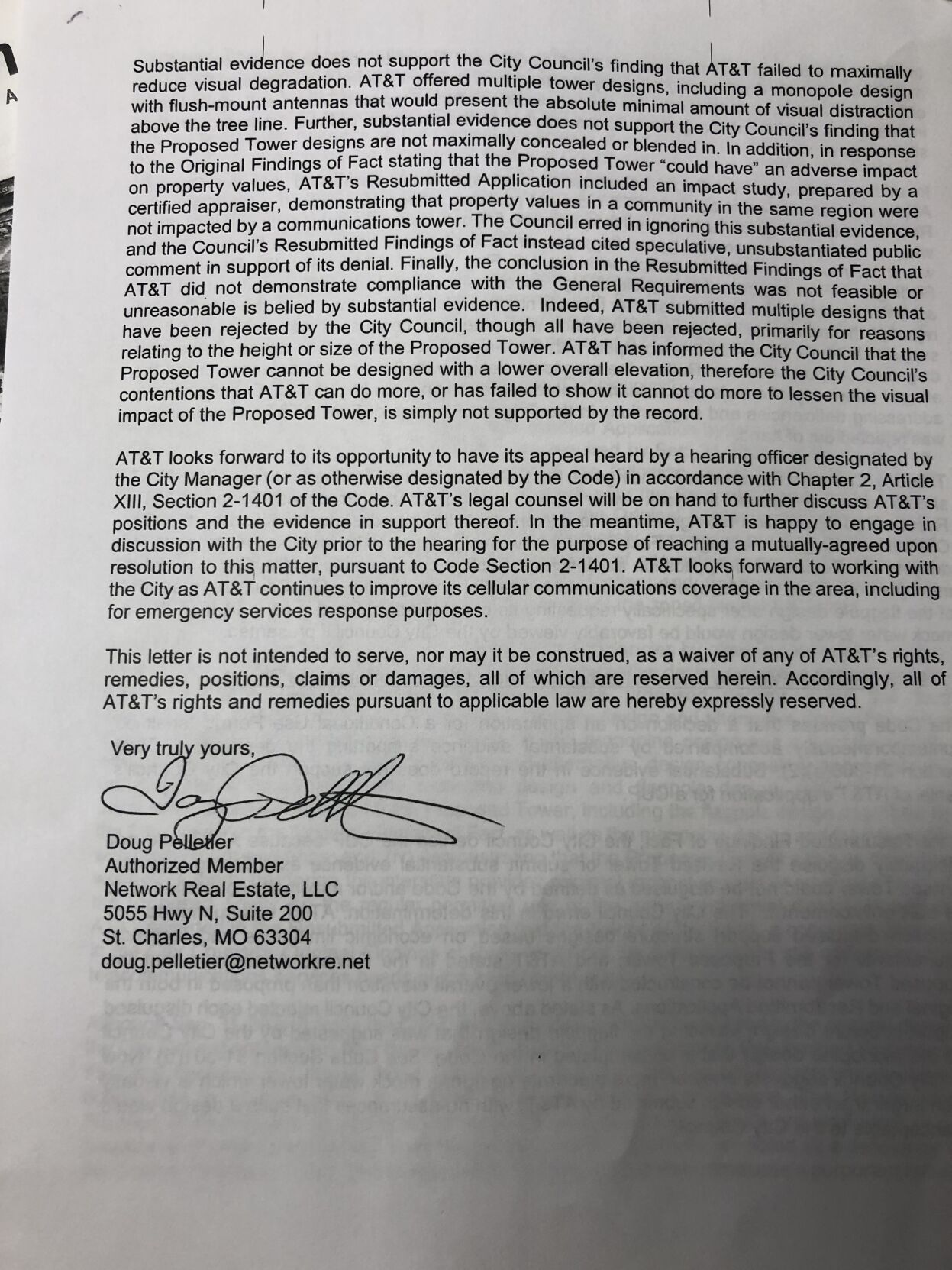 AT&T said its alternative designs, like the fake tree and flagpole, were proposed disguised structures and “present the absolute minimal amount of visual degradation.”

Despite what the appeal says, the council unanimously agreed the appeal was invalid.

“They filed the appeal under Section 31-311,” City Manager Bryan Carter said. “That provision allows for an appeal of a final action by a city officer, employee, board or commission. It doesn’t allow for an appeal of a decision made by the city council.”

Since the denial of the cell tower was made by the city council and not by a city officer, employee, board or commission, AT&T’s appeal is invalid.

“If Network Real Estate LLC seeks to continue to pursue a (cell tower) permit, the next step that I would anticipate would be possible litigation,” Carter said.

WASHINGTON — The general who leads U.S. efforts to thwart foreign-based cyberattacks, and punish those responsible, says he’s mounting a “surge” to fight incursions that have debilitated government agencies and companies responsible for critical infrastructure.

In an interview Tuesday with The Associated Press, Gen. Paul Nakasone broadly described “an intense focus” by government specialists to better find and share information about cyberattacks and “impose costs when necessary.” Those costs include publicly linking adversarial countries to high-profile attacks and exposing the means by which those attacks were carried out, he said.

A devastating wave of cyberattacks has compromised sensitive government records and at times led to the shutdown of the operations of energy companies, hospitals and schools. The SolarWinds espionage campaign exposed the emails of 80% of the email accounts used by the U.S. attorneys’ offices in New York and several other departments. A separate hack of Microsoft email server software affected potentially tens of thousands.

Nakasone jointly leads the National Security Agency, the chief intelligence agency tracking foreign communications, and U.S. Cyber Command, the Pentagon’s force for offensive attacks. While the two organizations work mostly in secret, they have been part of a Biden administration effort to publicly identify the people and countries behind attacks. The White House has linked the SolarWinds breach to Russian intelligence and the Microsoft hack to China.

President Joe Biden directly pressed Russian President Vladimir Putin in July to take action against cyber attackers, telling reporters, “We expect them to act if we give them enough information to act on who that is.”

FBI Deputy Director Paul Abbate said “there is no indication” yet that Russia had acted to crack down on ransomware. Abbate, Nakasone and other U.S. government officials spoke Tuesday at the Intelligence & National Security Summit.

Biden said in July that Russia had already begun efforts to spread misinformation regarding the 2022 midterm elections, calling them a “pure violation of our sovereignty.” Nakasone declined to detail allegations against Russia, saying intelligence agencies were “generating insights which will move to sharing information in the not too distant future.”

U.S. agencies are not aware of any specific threats related to the California gubernatorial recall election that concludes Tuesday, Nakasone said.