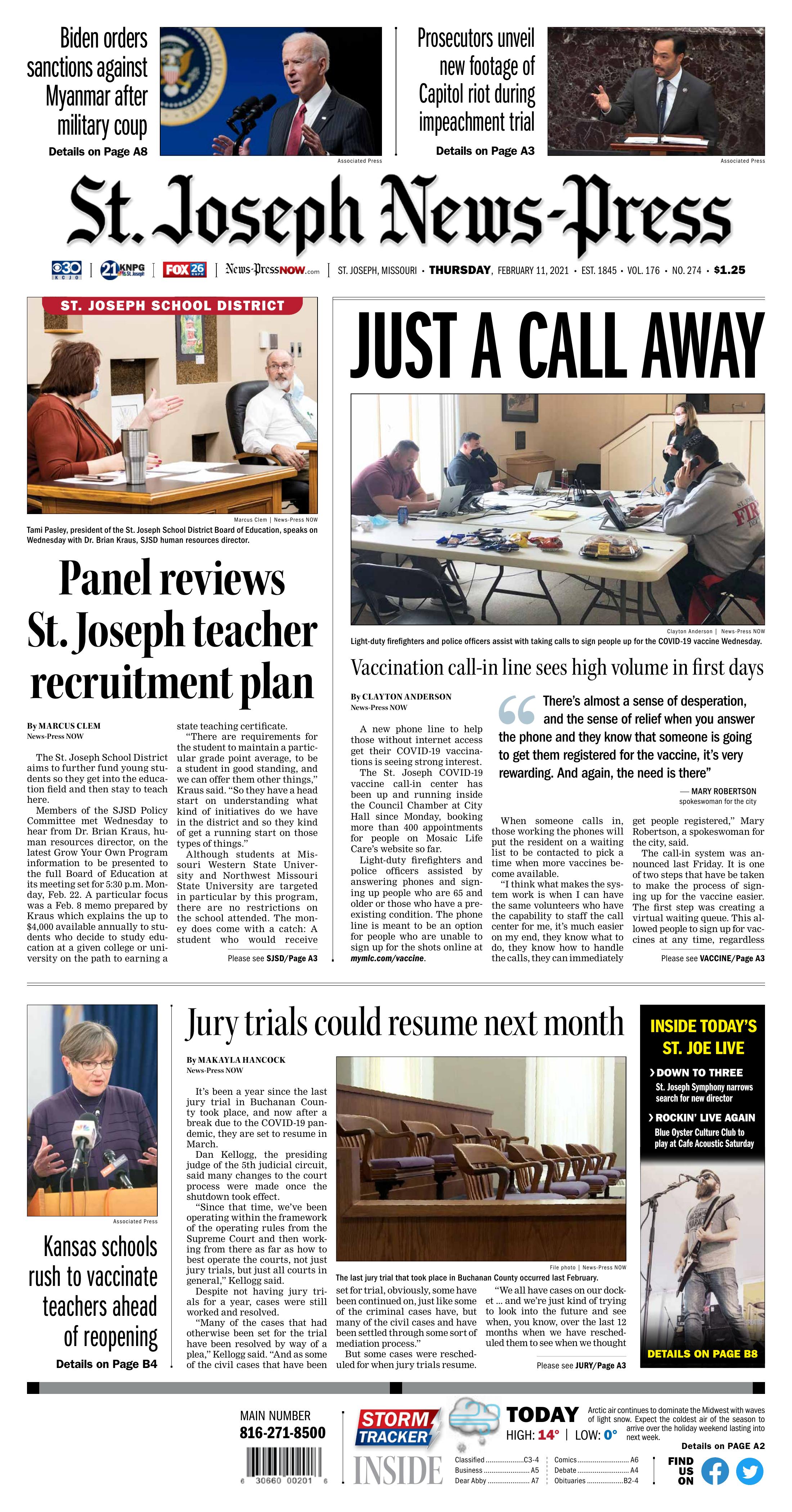 Light-duty firefighters and police officers assist with taking calls to sign people up for the COVID-19 vaccine Wednesday.

A new phone line to help those without internet access get their COVID-19 vaccinations is seeing strong interest.

The St. Joseph COVID-19 vaccine call-in center has been up and running inside the Council Chamber at City Hall since Monday, booking more than 400 appointments for people on Mosaic Life Care’s website so far.

Light-duty firefighters and police officers assisted by answering phones and signing up people who are 65 and older or those who have a pre-existing condition. The phone line is meant to be an option for people who are unable to sign up for the shots online at mymlc.com/vaccine.

When someone calls in, those working the phones will put the resident on a waiting list to be contacted to pick a time when more vaccines become available.

“I think what makes the system work is when I can have the same volunteers who have the capability to staff the call center for me, it’s much easier on my end, they know what to do, they know how to handle the calls, they can immediately get people registered,” Mary Robertson, a spokeswoman for the city, said.

The call-in system was announced last Friday. It is one of two steps that have be taken to make the process of signing up for the vaccine easier. The first step was creating a virtual waiting queue. This allowed people to sign up for vaccines at any time, regardless of current supply. Once more vaccines become available, those on the waiting list are notified and have 24 hours to pick an appointment time. Before the queue, people had to wait for a sign-up link to go live each time more appointments were made available.

Robertson said she knew people who were in the older population were having difficulties signing up to receive the vaccine, and she said the fact that the demand has been high for the shots is encouraging.

“There’s almost a sense of desperation, and the sense of relief when you answer the phone and they know that someone is going to get them registered for the vaccine, it’s very rewarding. And again, the need is there,” Robertson said.

Tami Pasley, president of the St. Joseph School District Board of Education, speaks on Wednesday at a meeting in the board room of the Downtown office.

Dr. Doug Van Zyl, superintendent of schools, speaks on Wednesday at a meeting in the board room of the St. Joseph School District Downtown office.

Dr. Brian Kraus, human resources director, speaks on Wednesday at a meeting in the board room of the St. Joseph School District Downtown office.

The St. Joseph School District aims to further fund young students so they get into the education field and then stay to teach here.

Members of the SJSD Policy Committee met Wednesday to hear from Dr. Brian Kraus, human resources director, on the latest Grow Your Own Program information to be presented to the full Board of Education at its meeting set for 5:30 p.m. Monday, Feb. 22. A particular focus was a Feb. 8 memo prepared by Kraus which explains the up to $4,000 available annually to students who decide to study education at a given college or university on the path to earning a state teaching certificate.

“There are requirements for the student to maintain a particular grade point average, to be a student in good standing, and we can offer them other things,” Kraus said. “So they have a head start on understanding what kind of initiatives do we have in the district and so they kind of get a running start on those types of things.”

Although students at Missouri Western State University and Northwest Missouri State University are targeted in particular by this program, there are no restrictions on the school attended. The money does come with a catch: A student who would receive funding for a four-year degree program in education would be expected to teach in St. Joseph for at least four years. The time commitment is tied to the time spent studying with SJSD’s backing.

Tami Pasley, president of the school board, said it is a common problem for students to struggle financially in the phase when they are student teachers and are typically working in a classroom for little or no pay. Grow Your Own helps resolve this problem, she said. Pasley cited her own experience as an educator and that of her peers.

“And so people either take out additional loans in order to be able to do that, or they have to work every night and every weekend (in a second job),” she said. “And so some people get all the way through and get to student teaching and then stop because they can’t financially afford to student teach. And they’re that close!”

In an industry that already ranks low with regard to entry-level pay, Missouri educators in general are critically positioned to struggle financially at times. The Show Me State ranks near the bottom for salary and benefits for new teachers, and neighboring states rank higher, particularly in Iowa and the Kansas side of the greater Kansas City region, according to research from the Missouri State Teachers Association and the Missouri National Education Association.

It’s been a year since the last jury trial in Buchanan County took place, and now after a break due to the COVID-19 pandemic, they are set to resume in March.

Dan Kellogg, the presiding judge of the 5th judicial circuit, said many changes to the court process were made once the shutdown took effect.

“Since that time, we’ve been operating within the framework of the operating rules from the Supreme Court and then working from there as far as how to best operate the courts, not just jury trials, but just all courts in general,” Kellogg said.

Despite not having jury trials for a year, cases were still worked and resolved.

But some cases were rescheduled for when jury trials resume.

“We all have cases on our docket ... and we’re just kind of trying to look into the future and see when, you know, over the last 12 months when we have rescheduled them to see when we thought we would be able to have those cases as well,” Kellogg said.

The process to begin jury trials again depends on the number of COVID-19 cases there are in the county.

“We’re hoping to be back and holding jury trials as soon as next month. One of the things that I’ve been watching and we’ve been watching to determine whether or not it’d be appropriate is what hospitalization rates here in our area. And they have been dropping precipitously since shortly after the first of the year,” Kellogg said.

The process will be different as people participate in jury trials. Social distancing and masks still will be in place.

“There’s only one courtroom here in our courthouse that we can actually do the whole trial process and that will be using the large courtroom, the division 3 courtroom, which will allow, even during the ... jury selection process that people will be able to socially distance six feet apart,” Kellogg said.

Those who do not feel safe enough to participate in jury duty if called, are encouraged to contact the jury administrator, he said.

“We are very understanding about that, and if someone really feels that they can’t do this because it would be too anxious for them, let them know,” Kellogg said. “We will just reschedule their service for sometime six months down the road or something like that when we anticipate and all hope and pray that we are through this pandemic.”