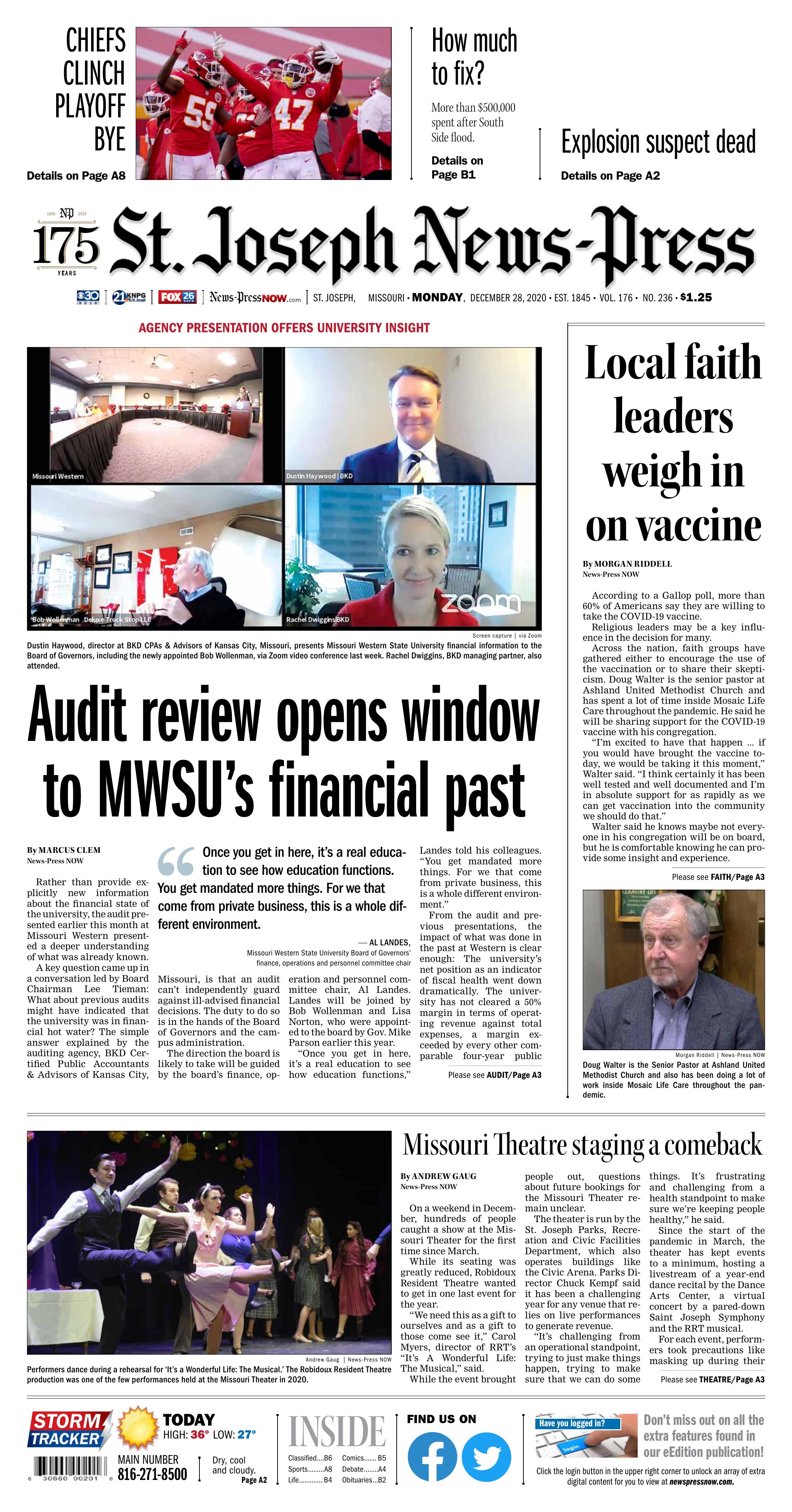 Performers dance during a rehearsal for ‘It’s a Wonderful Life: The Musical.’ The Robidoux Resident Theatre production was one of the few performances held at the Missouri Theater in 2020.

On a weekend in December, hundreds of people caught a show at the Missouri Theater for the first time since March.

While its seating was greatly reduced, Robidoux Resident Theatre wanted to get in one last event for the year.

“We need this as a gift to ourselves and as a gift to those come see it,” Carol Myers, director of RRT’s “It’s A Wonderful Life: The Musical,” said.

While the event brought people out, questions about future bookings for the Missouri Theater remain unclear.

The theater is run by the St. Joseph Parks, Recreation and Civic Facilities Department, which also operates buildings like the Civic Arena. Parks Director Chuck Kempf said it has been a challenging year for any venue that relies on live performances to generate revenue.

Since the start of the pandemic in March, the theater has kept events to a minimum, hosting a livestream of a year-end dance recital by the Dance Arts Center, a virtual concert by a pared-down Saint Joseph Symphony and the RRT musical.

For each event, performers took precautions like masking up during their rehearsals and for some, while they were performing. When an audience was allowed for “It’s a Wonderful Life: The Musical,” they were automatically placed several seats apart by RRT’s ticketing system.

Kempf said these precautions were not taken lightly and not every event request gets the green light.

“There are some things that we reject because they’re just not going to work,” he said. “If (we get) a reasonable request, we’ll submit it to the health department and allow them to evaluate it. They will either say ‘It looks good’ or ‘It doesn’t look good.’”

Whether that protocol means more events at the Missouri Theater remains unclear. According to RRT’s schedule, it doesn’t have another show planned at the venue until October 2021 with “School of Rock: The Musical.” It will continue to perform shows at the Ruby Theater in the spring.

Other organizations like the St. Joseph Performing Arts Association, which books performers from around the world for shows at the Missouri Theater, said tours are still on pause for the foreseeable future.

“Right now, professional artists aren’t touring. So even if we could try to do a show, we couldn’t get anybody to come,” Beth Sharp, executive director for PAA, said.

In the absence of events, PAA has resorted to a mixture of virtual events and outdoor concerts, like its “Arts on the Move” shows it held in October, where it booked local artists for neighborhood shows.

“Even during that time, we ended up having to change out some of the artists that we had booked just because they had fears of the COVID or getting that or they had to quarantine or something,” Sharp said.

The same kind of caution is keeping the symphony from returning to the Missouri Theater. It has older members in its group, as well as its audience. While it enjoyed its virtual shows, it’s not ready to perform in front of a crowd.

As COVID-19 vaccines roll out, Kempf sees the summer as a time when people are likely to start returning to performances, even if they’re outdoors. Indoor venues, he said, will likely have more of a task to convince people to attend again.

“We’d love to see this get back to normal, but I don’t think that’s going to happen ... at least through spring,” he said.

In the meantime, Kempf said the parks and health departments will continue to take shows on a case-by-case basis.

“We’ll continue watching what’s going on in the world. We’ll continue listening to the health experts. We’ll continue trying to make good, safe, intelligent decisions, but also try and allow people to do some normal activities,” he said.

According to a Gallop poll, more than 60% of Americans say they are willing to take the COVID-19 vaccine.

Religious leaders may be a key influence in the decision for many.

Across the nation, faith groups have gathered either to encourage the use of the vaccination or to share their skepticism. Doug Walter is the senior pastor at Ashland United Methodist Church and has spent a lot of time inside Mosaic Life Care throughout the pandemic. He said he will be sharing support for the COVID-19 vaccine with his congregation.

“I’m excited to have that happen ... if you would have brought the vaccine today, we would be taking it this moment,” Walter said. “I think certainly it has been well tested and well documented and I’m in absolute support for as rapidly as we can get vaccination into the community we should do that.”

Walter said he knows maybe not everyone in his congregation will be on board, but he is comfortable knowing he can provide some insight and experience.

However, the United States Conference of Catholic Bishops expressed some concerns about the vaccines, as three, including the currently available ones from Pfizer and Moderna along with one being developed by AstraZeneca, have a connection to cell lines that started with tissue taken from abortions, a common method for creating vaccines.

And while the bishops group states it never supports abortion or practices of such, “In view of the gravity of the current pandemic and the lack of availability of alternative vaccines, the reasons to accept the new COVID-19 vaccines from Pfizer and Moderna are sufficiently serious to justify their use, despite their remote connection to morally compromised cell lines. In addition, receiving the COVID-19 vaccine ought to be understood as an act of charity toward the other members of our community. In this way, being vaccinated safely against COVID-19 should be considered an act of love of our neighbor and part of our moral responsibility for the common good.”

The group did advise followers against receiving the AstraZeneca vaccine if other alternatives are available.

Some religious leaders in town see the issue of vaccines as too politically split and an individual choice. Officials with Grace Evangelical’s Church told News-Press NOW they don’t have a stance on the vaccine and would not be discussing it with their congregation.

Other Pentecostal groups in town said while it is an individual decision, they believe the COVID-19 vaccine is going to be a good thing. They added there is too much skepticism and politicization around the vaccine to put forth an opinion.

Walter said he thinks with time will come more comfortability for people to get the vaccine when it comes time.

“I think people are becoming more comfortable and it’s clearly the fact that we will see it rolled out in real time with so many people being vaccinated before the general public has an opportunity. I think it’ll build confidence as they see people receive it and not have side effects,” Walter said.

President-elect Joe Biden and Vice President Mike Pence both have received the COVID-19 vaccination publicly. In September, only 50% of Americans said they were willing to get the COVID-19 vaccine, but the number has since risen to 63%.

Rather than provide explicitly new information about the financial state of the university, the audit presented earlier this month at Missouri Western presented a deeper understanding of what was already known.

A key question came up in a conversation led by Board Chairman Lee Tieman: What about previous audits might have indicated that the university was in financial hot water? The simple answer explained by the auditing agency, BKD Certified Public Accountants & Advisors of Kansas City, Missouri, is that an audit can’t independently guard against ill-advised financial decisions. The duty to do so is in the hands of the Board of Governors and the campus administration.

The direction the board is likely to take will be guided by the board’s finance, operation and personnel committee chair, Al Landes. Landes will be joined by Bob Wollenman and Lisa Norton, who were appointed to the board by Gov. Mike Parson earlier this year.

“Once you get in here, it’s a real education to see how education functions,” Landes told his colleagues. “You get mandated more things. For we that come from private business, this is a whole different environment.”

From the audit and previous presentations, the impact of what was done in the past at Western is clear enough: The university’s net position as an indicator of fiscal health went down dramatically. The university has not cleared a 50% margin in terms of operating revenue against total expenses, a margin exceeded by every other comparable four-year public institution in the state of Missouri (the University of Missouri-Columbia was left out of BKD’s FY 2020 survey).

An audit can reveal the values of various accounts aren’t accurate. Revenues and/or expenses are greater or lesser than thought. Assets aren’t worth what they seem to be. To that end, BKD issued a “clean” audit for Fiscal Year 2020, as opposed to the alternative “qualified” audit, which would highlight given problems. But possibly as a demonstration of what no audit is capable of doing, clean audits were produced by BKD for the 2017, 2018 and 2019 fiscal years. Following the FY 2020 audit, BKD will release the FY 2021 at this time next year, concluding a five-year contract.

The university came to grips with the extent of its financial problems early in 2020, and then the pandemic arrived. All are in agreement that this was something of a perfect storm. University leaders have vowed to closely review the 80-page audit findings and associated documentation to try to be sure it doesn’t happen again.

“It’s information that we appreciated and take very seriously with our fiduciary obligations to the university and to the students, to the stakeholders here, to the taxpayers,” Tieman said in comments following the presentation.