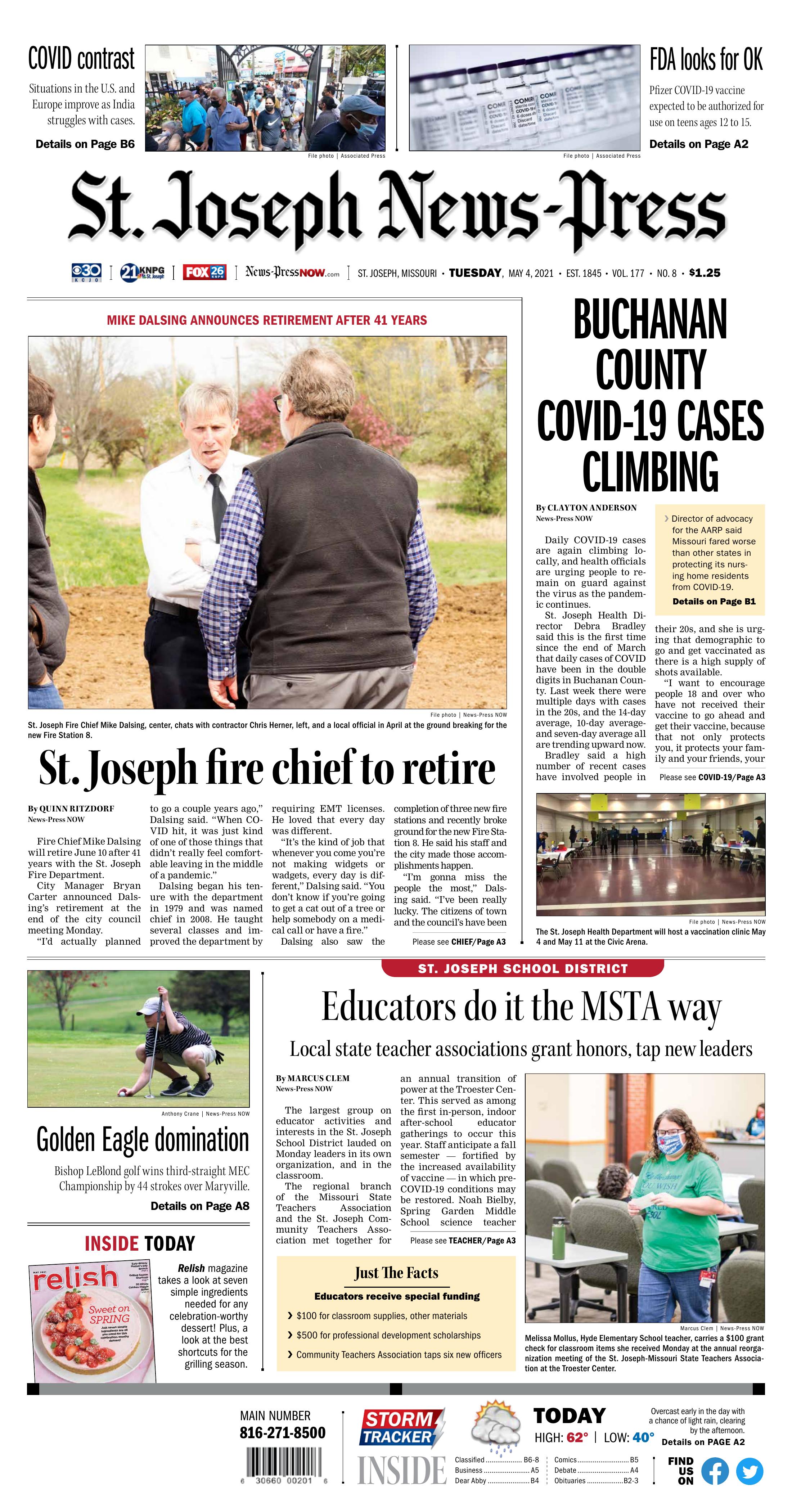 “I’d actually planned to go a couple years ago,” Dalsing said. “When COVID hit, it was just kind of one of those things that didn’t really feel comfortable leaving in the middle of a pandemic.”

Dalsing began his tenure with the department in 1979 and was named chief in 2008. He taught several classes and improved the department by requiring EMT licenses. He loved that every day was different.

“It’s the kind of job that whenever you come you’re not making widgets or wadgets, every day is different,” Dalsing said. “You don’t know if you’re going to get a cat out of a tree or help somebody on a medical call or have a fire.”

Dalsing also saw the completion of three new fire stations and recently broke ground for the new Fire Station 8. He said his staff and the city made those accomplishments happen.

“I’m gonna miss the people the most,” Dalsing said. “I’ve been really lucky. The citizens of town and the council’s have been extremely supportive. I tell people that it takes three years to build a fire station and they look at you like you’re crazy, but it takes about that long for government to build something.”

Kenny Cordonnier, chief of fire prevention, will serve as the interim fire chief. Cordonnier has been with the fire department for 39 years.

“I’ve got a great staff,” Dalsing said. “They can say everything they want to say about me, but the staff has done all the heavy lifting for these projects. The fire department is going to be in good hands.”

The largest group on educator activities and interests in the St. Joseph School District lauded on Monday leaders in its own organization, and in the classroom.

The regional branch of the Missouri State Teachers Association and the St. Joseph Community Teachers Association met together for an annual transition of power at the Troester Center. This served as among the first in-person, indoor after-school educator gatherings to occur this year. Staff anticipate a fall semester — fortified by the increased availability of vaccine — in which pre-COVID-19 conditions may be restored. Noah Bielby, Spring Garden Middle School science teacher and CTA president-elect, reflected on what comes next.

“I think it’s important that we keep a positive mindset with everything,” he said. “You know, keep in mind: ‘How can we help kids keep a positive attitude?’ No matter how bad the situation may appear, that’s our duty.”

“The members believe in you,” Peters said in conducting their oaths of affirmation. “You can rely on their cooperation as our organization becomes stronger through you, its leaders. Each member has great potential, and that power is cumulative.”

Bielby spoke to how the last year has been quite a journey for all educators, and now it falls to him to help lead them through the next chapter.

“It’s a very proud moment to represent my fellow teachers,” he said. “To help people out and always think about what’s best for the students.”

Dr. Robert Sigrist, SJSD director of non-academic support and student services, who became the CTA’s representative for the district administration, said he appreciates the willingness of educators to step in to valuable leadership roles.

“MSTA and our local CTA have always been great advocates for our staff and students and have been outstanding leaders in our district,” Sigrist said.”

In addition to leadership changes, a number of teachers each received $100 grants to pay for classroom supplies or other needs they presented in respective applications. In addition, $500 scholarships were given to educators who are taking higher education courses to further their own professional development. Grant recipients included Brooke Kissel, Charisse Giseburt, Courtney Burgess, Melissa Mollus and Tanya Dalrymple. The beneficiary scholars are Lisa Reed, Megan Finney and Whitney Strasser.

n $100 for classroom supplies, other materials

The St. Joseph Health Department will be hosting a vaccination clinic May 4 and May 11.

Daily COVID-19 cases are again climbing locally, and health officials are urging people to remain on guard against the virus as the pandemic continues.

St. Joseph Health Director Debra Bradley said this is the first time since the end of March that daily cases of COVID have been in the double digits in Buchanan County. Last week there were multiple days with cases in the 20s, and the 14-day average, 10-day averageand seven-day average all are trending upward now.

Bradley said a high number of recent cases have involved people in their 20s, and she is urging that demographic to go and get vaccinated as there is a high supply of shots available.

“I want to encourage people 18 and over who have not received their vaccine to go ahead and get their vaccine, because that not only protects you, it protects your family and your friends, your co-workers, people you go to church with, so it protects everybody,” Bradley said.

Bradley said she believes there is a mixture of factors contributing to the rise in cases locally. She said those things include mask fatigue, people gathering in the warmer months and the low percentage of those in the county who have received a vaccine.

In Buchanan County, 19% of people have received at least a first dose of the vaccine, which is low compared to the statewide number of 37.7%.

Bradley said the vaccine supply is ample, and getting a shot is not an issue, so all who are eligible should get vaccinated.

“There are plenty of vaccines. People who are healthy still need the vaccine, people who are waiting for everybody else to get it, they’ve got it. So now’s the time to sign up and get vaccinated,” Bradley said.

A vaccination clinic will be taking place from 9 to 11 a.m. Tuesday, May 4, at the Civic Arena. People can sign up at signup.com/client/invitation2/secure/6270244045251540109/false#/invitation, but Bradley said there likely will be vaccines available for those who just walk up. The health department has received Moderna vaccines for the clinic.

Another clinic will be offered on Tuesday, May 11.

Educators Do It the MSTA Way