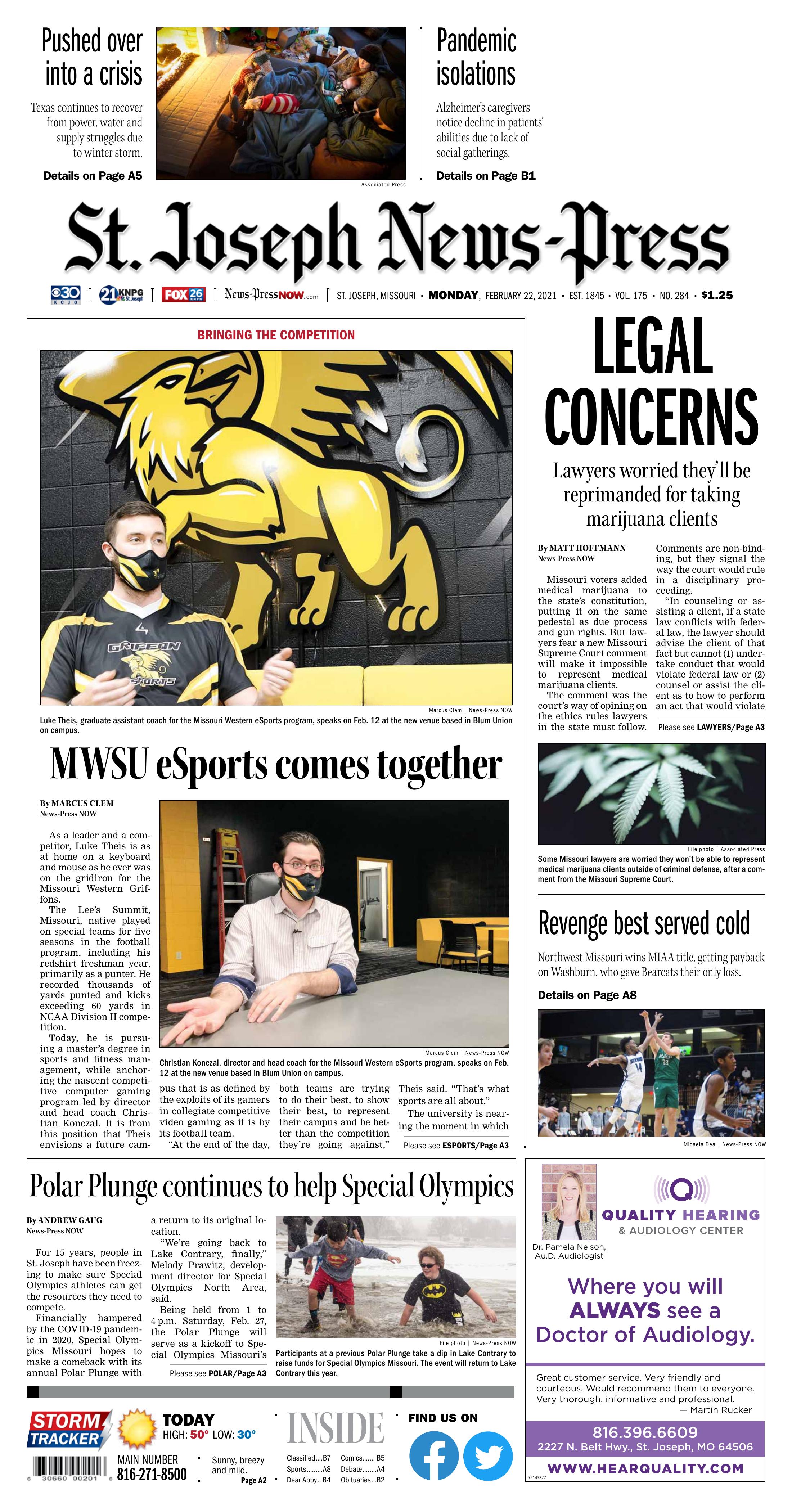 As a leader and a competitor, Luke Theis is as at home on a keyboard and mouse as he ever was on the gridiron for the Missouri Western Griffons.

The Lee’s Summit, Missouri, native played on special teams for five seasons in the football program, including his redshirt freshman year, primarily as a punter. He recorded thousands of yards punted and kicks exceeding 60 yards in NCAA Division II competition.

Today, he is pursuing a master’s degree in sports and fitness management, while anchoring the nascent competitive computer gaming program led by director and head coach Christian Konczal. It is from this position that Theis envisions a future campus that is as defined by the exploits of its gamers in collegiate competitive video gaming as it is by its football team.

“At the end of the day, both teams are trying to do their best, to show their best, to represent their campus and be better than the competition they’re going against,” Theis said. “That’s what sports are all about.”

The university is nearing the moment in which it will officially unveil its eSports Arena, located within Blum Union on campus in the former location of the University Bookstore. A grand opening date has yet to be set, but a tour led by Konczal this month revealed almost all of the pieces are in place.

“People want to know who we are, what we’re doing,” the head coach said. “We have a really fantastic looking arena, we have a very good-looking logo and a brand that we’re building.”

Chiefly, the program relies on a score of Windows machines at the Blum Union arena, each of which is the computational processing equivalent of a souped-up muscle car. Most of the competitive games in which the team will be involved in, such as League of Legends and Rocket League, are designed to function well on modest computer hardware. Each machine nonetheless contains an Nvidia GeForce RTX3080 graphics processing unit with 10 gigabytes of video memory plus 16 gigabytes of RAM anchored by an Intel 8-core central processing unit.

The GPU alone retails at $1,000. The investment is meant to “future proof” the hardware for more advanced games. As Theis and Konczal explained it, providing the hardware and the venue will be a long-term recruiting attribute for the university for students from the community and region who want to attend a smaller, lower-cost university while still participating in the top tier of competitive video gaming. Theis is looking forward to having the program in full operation.

“What we want to do is make an impact and students on campus to have something new to do,” he said. “I think this will provide a location on campus where students can connect.”

Some Missouri lawyers are worried they won’t be able to represent medical marijuana clients outside of criminal defense, after a comment from the Missouri Supreme Court.

Missouri voters added medical marijuana to the state’s constitution, putting it on the same pedestal as due process and gun rights. But lawyers fear a new Missouri Supreme Court comment will make it impossible to represent medical marijuana clients.

The comment was the court’s way of opining on the ethics rules lawyers in the state must follow. Comments are non-binding, but they signal the way the court would rule in a disciplinary proceeding.

Patrick Nolan, a Missouri lawyer who practices in the field, believes the comment was the court’s way of indicating lawyers can’t advise medical marijuana businesses how to operate because the drug is still illegal under federal law.

“The comments make it clear that the Missouri Supreme Court is letting attorneys know that they are potentially facing discipline for advising people in the medical marijuana business,” Nolan said. “This will not impact criminal defendants, it will not even impact medical marijuana consumers. It will impact the ability to advise caregivers that may be interested in contracting with their patients, or reviewing contracts with their landlord, because the caregiver would be distributing marijuana under federal law.”

Other lawyers have pointed to a section of article 14 of the Missouri Constitution, which is intended to protect attorneys who work in the medical marijuana industry. The supreme court’s comment could be in conflict with section 1.5 of article 14.

While medical marijuana was legalized by majority vote of the public, Nolan said it’s still illegal under federal law. While federal prosecutors have declined to prosecute cases so long as a person is operating legally under the state law, the federal government isn’t required to defer to the state’s medical marijuana constitutional amendment.

Nolan said he believes the court is clearly disregarding an initiative by citizens to legalize medical marijuana.

“So they’ve done this in the past, where they said that citizen-led ballot initiatives are meaningless and we’re not going to follow it,” Nolan said. “And they’re signaling that again here.”

Several medical marijuana and connected groups, including the Canna Convict Project, Missouri Association of Criminal Defense Lawyers and the Missouri Cannabis Network released a joint statement after a meeting Tuesday to discuss the comment.

“Missouri attorneys and advocacy organizations are working diligently to obtain clarification from the Missouri Supreme Court regarding the addition of Comment #8. A formal opinion has been requested from the Supreme Court Advisory Committee to clarify if and how the MO MMJ program attorneys and patients will be affected,” the groups said. “At this time, these organizations do no believe that patient legal rights will be impacted by this comment, and legal representation of MMJ patients will still be available. However, we do not intend to let this decision go unanswered and will continue to pressure the state to uphold the constitutional protections of medical patients and attorneys.”

A spokesperson for the Missouri Supreme Court didn’t respond to a request for comment.

Participants at a previous Polar Plunge take a dip in Lake Contrary to raise funds for Special Olympics Missouri. The event will return to Lake Contrary this year.

For 15 years, people in St. Joseph have been freezing to make sure Special Olympics athletes can get the resources they need to compete.

Financially hampered by the COVID-19 pandemic in 2020, Special Olympics Missouri hopes to make a comeback with its annual Polar Plunge with a return to its original location.

Being held from 1 to 4 p.m. Saturday, Feb. 27, the Polar Plunge will serve as a kickoff to Special Olympics Missouri’s 50th anniversary, which the organization is hoping will be a year of safe events for its athletes and supporters.

“It’s been kind of different because we have to plan around what could happen. So we’re planning ahead and we’re going forward,” Prawitz said.

The plunge, which is celebrated around the United States, generates money that is used to provide athletes with intellectual disabilities year-round sports and training opportunities. The fundraising goal is $30,000, which Prawitz sees as achievable, even with all of the year’s setbacks.

“Our donations were down. Of course, we couldn’t hold any events, so it’s kind of like a Catch-22: If you don’t have a program side of it, you can’t very well go out and ask for money,” she said.

Having participated in past Plunge events, April Hook and Katie Lyle got competitive with their efforts to raise money.

“We both try and beat the other one. It’s like ‘My goal is to beat Katie’ and I never have,” Hook said.

For Lyle, it means supporting her brother Tanner, who has Down syndrome and has been a Special Olympic athlete for almost 30 years.

“I just love that it brings awareness to our program, and it also raises funds for the program to keep it going. And that means the world to people like me, because the program’s done so much for my brother,” she said.

While the Special Olympics Spring Games, one of the biggest events for organizations, went virtual in 2020, it’s looking to get back to in-person competitions this year. While there will be COVID safety protocols in place, it still may not compare to previous years.

“We have a lot of people that probably still will not participate, but we’re going to go ahead,” Prawitz said.

In addition to the plunge, the Special Olympics is planning fundraisers like a walk-a-thon with their athletes and a ladies night out flashing back to the 1950s to celebrate the organization’s 50th anniversary. With all of that, Prawitz said they’re still taking precautions.

“We’re still doing the social distancing. We’re wearing the masks and we’re taking temperatures at most of our events,” she said.

The move back to Lake Contrary will allow for people to be spaced at least 6 feet apart. Beyond the safety angle, Prawitz said she’s happy to see the event go back to its roots. Since 2017, the plunge has bounced between the St. Joseph Frontier Casino and Missouri Western State University. While the Special Olympics is thankful for those temporary homes, neither drew the audience Lake Contrary did.

“For the last four years we had been offsite due to the fact that their water had been bad ... but Lake Contrary is back. It’s looking great, so we’re going home,” she said.

COVID precautions like pausing in between groups so the changing tents can be cleaned and making sure groups aren’t crammed together will be in place.

With a theme for the plunge of “Jurassic Times for Jurassic Plungers,” Prawitz is hoping to see a lot of dinosaur costumes out in the water and the community together again.

“We’d just like to invite people to come out and watch if they want to. The beach is going to be wide open,” she said.

Participation in the Polar Plunge is $75 per person and includes a T-shirt. Those unable to attend can donate at somo.org/plunge.